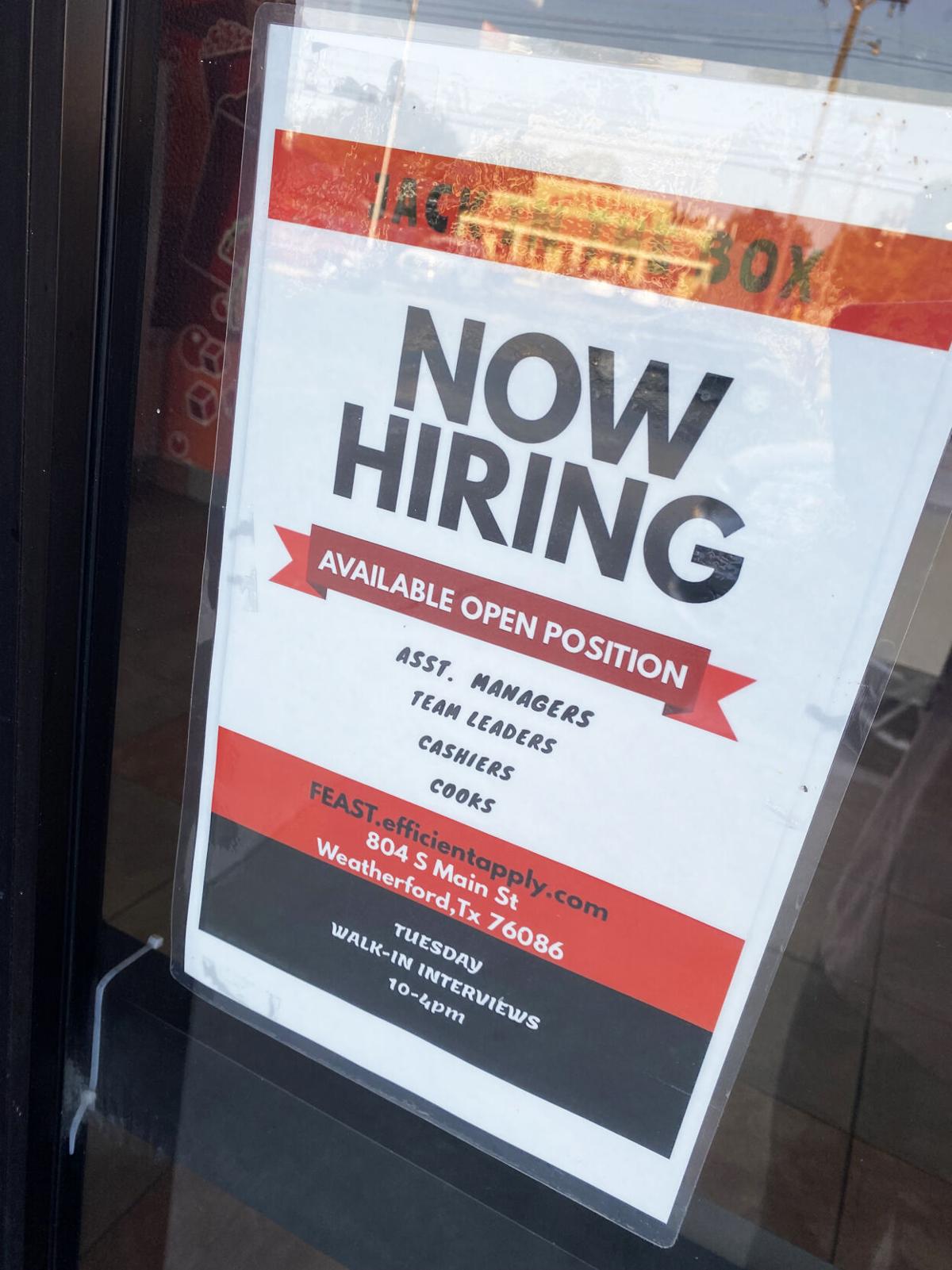 A now-hiring sign at Jack in the Box, off South Main Street in Weatherford, boasts many positions available.

A now-hiring sign at Jack in the Box, off South Main Street in Weatherford, boasts many positions available.

HUNTSVILLE — Chris Woolsey hires hundreds of seasonal workers at the world-famous Collin Street Bakery on an annual basis. With a sharp decline in applications, the large bakery may have trouble producing, packing and distributing its DeLuxe fruitcakes — a Christmas staple for many families.

“This year we are seeing similar numbers and still haven’t figured out if people are still afraid to work because of the virus, are making more from unemployment by not working or if our pay is not in line with the rest of the market,” Woolsey said.

The hiring crisis has been an issue for businesses across the country since the spring, and nowhere is that more clear than small communities across Texas.

Short-staffed restaurants and bars have had to limit hours or close some days to give the few employees they have a much-needed break. New businesses have stalled openings as they struggle to find enough manpower to operate. Even local municipalities had to increase pay and hiring incentives to retain employees.

“A significant amount of people are leaving the job market,” said Ray Hernandez, the president and CEO of the Huntsville-Walker County Chamber of Commerce in Southeast Texas. “The older folks are leaving the job market and the younger folks aren’t entering it. So that’s forcing employers to increase their wages to $12-plus per hour just for labor that before the pandemic was easily accessible.”

Huntsville, like many communities in the Lone Star State, has seen its unemployment rate slowly dip closer to the statewide average. During the height of the pandemic, the city of nearly 50,000 people — home to both the Texas Department of Transportation and Sam Houston State University — saw unemployment reach 12.7%. That rate has dropped to 8.2% in July but remains above the statewide unemployment rate of 6.2%.

Hernandez says small business owners are going to have to get innovative as people leave or remain out of the job market.

“People are going to have to either pay more or get more involved in their business,” he said. “In the past, a business owner may be able to just pay someone to run day-to-day operations, but for many, that is no longer the case.”

Corsicana, where Collin Street Bakery is located, has an unemployment rate below the statewide average at 6%. Woolsey said the bakery staffs about 100 employees year-round, but it is unique in its need to hire a lot of people each year for a short time.

“We are still doing the same work that Collin Street Bakery has hired half the town to do for the last 100 years,” he said. “We have to fill these seasonal roles every single year but 2020 and 2021 have been a completely different ballgame, it has become a full-time job for our entire management team to try to find enough people to work.”

Open positions at the bakery include everything from decorating fruit cakes, shipping, retail and customer service.

“We offer retention bonuses, have increased our starting pay and utilize every resource we can to recruit, including newspaper ads, signs, fliers and social media, but at this point, all other major employers are doing this as well,” he said.

Many business experts say that pay isn’t always the key decider if a person enters the workforce or stays at their current job.

As the senior business development liaison for the north-central Texas branch of Workforce Solutions, Adam Kern regularly speaks with employers, highlighting what he calls the “retention revolution.”

“I now speak about culture more than anything else, and if an employer can’t tell me about their culture, that’s problem No. 1,” he said. “If your culture was good, you’d have better retention.”

Kern said many people are using the current opportunity for a career change, but said it’s not all about the money.

“Pay is like No. 6 on the list,” Kern added. “Poor leadership has led to more exits than anything else — a lack of common decency, understanding, structure and things like that.”

Along the Texas-Oklahoma border in Cooke County, employment has slowly inched close to pre-pandemic levels. But employers there still struggle to get workers.

The Gainesville office? has hosted several job fairs this month across multiple job sectors, including retail, hospitality and advanced manufacturing. Not all of them are in restaurants or on shop floors.

“They're not all labor positions. Accounting is one of the positions that's hardest to fill in this area for some reason. You have some sales, marketing, operations management – some of those areas,” said Audrey Schroyer, executive director of the Gainesville Economic Development Corporation.

Local manufacturers are having the same problems as restaurants and retailers with a limited supply of applicants.

“There's a good spread of the types of positions that are open, but it is definitely a huge challenge right now with what we're seeing in the labor market right now,” Schroyer added.

About 80 miles south in Weatherford, a town of nearly 30,000 people has seen its unemployment rate dropped to near pre-pandemic at 4.5%. But businesses continue to struggle to find employees.

“I think it’s happening with a lot of businesses nationwide — it’s not unique to us,” Weatherford Chamber of Commerce President Tammy Gazzola said.” We are seeing businesses looking at raising their current wages, and working hard to maintain and keep those employees they have.”

“It’s when you think you’ve found somebody good that something happens,” he said. “Just all over town you hear, ‘we need a lot,’ or, ’somebody quit.’ There are definitely some businesses hurting as far as employment.”

Like other employers, Lopez suspects $1,200 monthly unemployment checks have depressed the hiring market.

“When I was first interviewing, a lot of people were calling for interviews, but not showing up,” he said. “And I think that is because they had to show they were interviewing. I think a lot of them, unfortunately, got lazy. They’d rather sit on the couch and collect $1,200 a month instead of going out and doubling their money.”

Jobs openings can be found all across Palestine, from the grocery store to a new steakhouse. Online there are around 800 job postings in a city with a population of under 18,000.

“Many (business owners) are having a tough time even with competitive wages attracting new employees,” said Heather Chancellor, the President and CEO of Palestine Area Chamber of Commerce. “Some professions are looking at up-front bonuses, many have to keep the wage they have due to our town’s size and can’t compete with a larger market.

“Our new Starbucks for example, had challenges with the interview process. I’d think a large brand such as that wouldn’t have the issues a smaller name would, but by offering in-person and virtual interviews, they were able to hire a full staff and will open soon.”

“New business will still come, it may be a little tougher than anticipated to hire new folks, but we are not unique in this situation.”