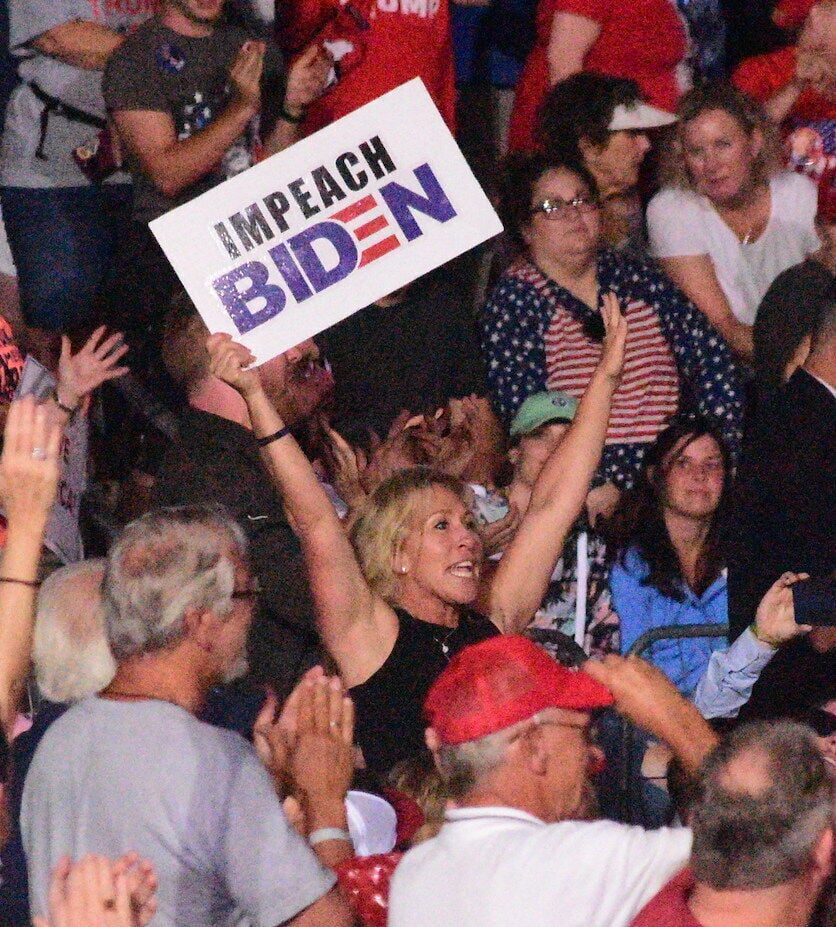 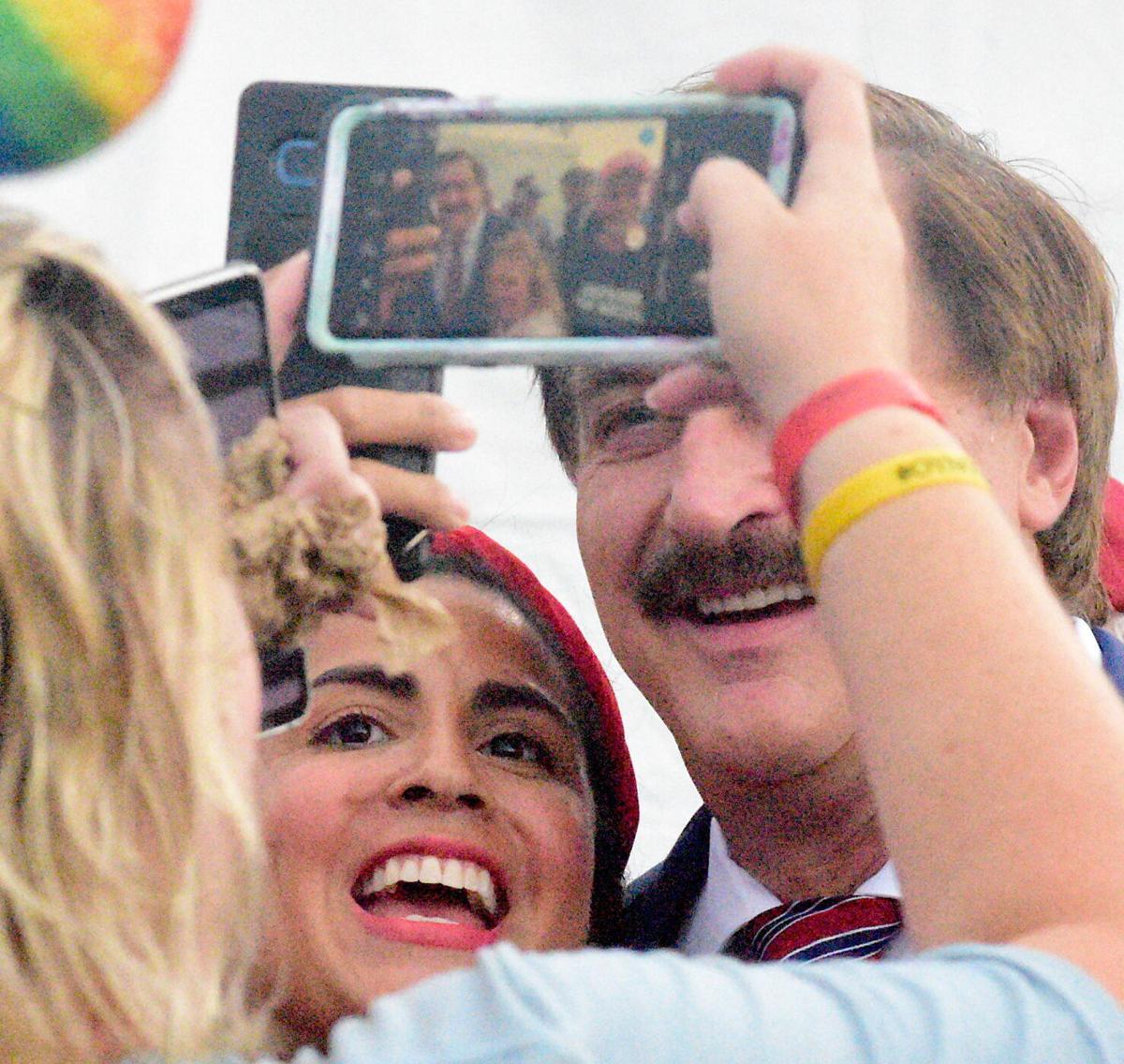 MyPillow CEO Mike Lindell greets Trump supporters at the Cullman, Ala., Trump Rally Saturday. Lindell was one of several speakers to take the stage in support of the former president. 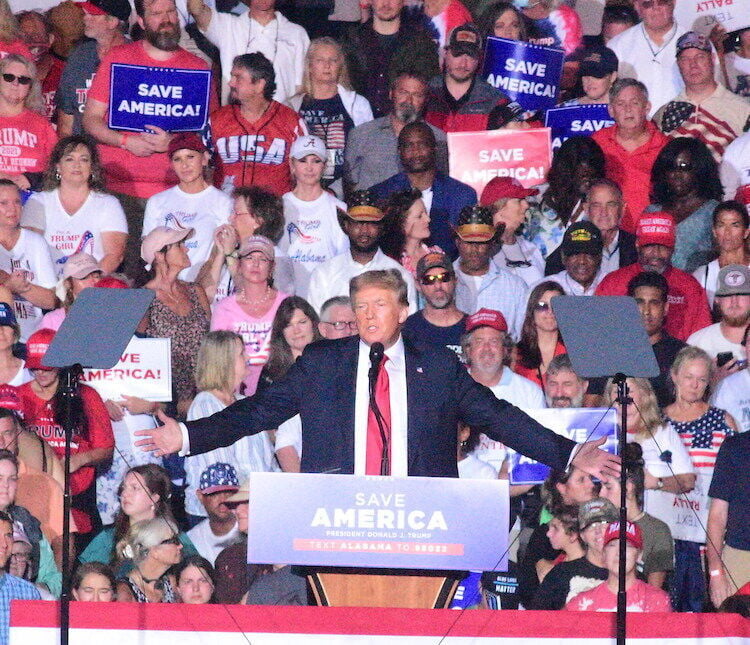 Former President Donald Trump at a rally in Cullman, Ala., Saturday night.

MyPillow CEO Mike Lindell greets Trump supporters at the Cullman, Ala., Trump Rally Saturday. Lindell was one of several speakers to take the stage in support of the former president.

Former President Donald Trump at a rally in Cullman, Ala., Saturday night.

CULLMAN, Ala. - Appearing before thousands of supporters on Saturday in one of the lowest-vaccinated states, former President Donald Trump encouraged his followers to get vaccinated against COVID-19.

While taking credit for the development of the vaccines, Trump said he'd been vaccinated, but said everyone should be allowed to make their own choice.

"I believe totally in your freedoms, but I recommend taking the vaccine," he said. The message, however, was met by jeers from the crowd.

Only 36% of Alabamians have been vaccinated against COVID-19, and Cullman County's vaccination rate is even lower, at 28%. This week, the Alabama Hospital Association said there were no available ICU beds in the state and 83% of the hospitalized are unvaccinated. The city of Cullman declared a state of emergency in order to provide additional personnel and equipment after the support was requested by the Cullman Regional Medical Center.

This was Trump's fourth rally since losing the 2020 election to Joe Biden, and his speech covered familiar territory for a Trump rally. He reiterated his claims about election fraud, decried the Biden administration's border policy and called the infrastructure plan "the roadmap to the Green New Deal."

"Biden has obliterated our border, given up our energy independence, caused soaring inflation. He failed totally on economic policies, you look at what's going on, it's crazy," he said.

But he also spent a large amount of time in his 90 minute speech on the United State's exit from Afghanistan, calling it "humiliating."

"Biden failed totally on the pandemic and he's now overseeing the greatest foreign power humiliation in the history of the United States," said Trump.

"It didn't have to happen," he said. "All he had to do was leave the soldiers there until everything was out - our citizens and our weapons - and then you bomb the hell out of the bases and you say 'bye-bye.'"

Trump said when he'd negotiated with the Taliban on the withdrawal of troops he'd told them, "Anything happens, we are going to rain terror upon you. It will be a terrible thing."

He also used the rally as an opportunity to praise Congressman Mo Brooks, who is seeking the replace Richard Shelby in the U.S. Senate. Brooks was one of the speakers at the Jan. 6 rally in Washington, D.C. that preceded the insurrection at the U.S. Capitol and has been named as a defendant in a lawsuit by Rep. Eric Swalwell (D-Calif.) for inciting the mob to violence.

Trump has endorsed Brooks in the race against three other candidates including Lynda Blanchard, his ambassador to Slovenia. Other candidates are former Business Council of Alabama CEO Katie Boyd Britt, who also previously served as chief of staff for Shelby, and Jessica Taylor.

Other familiar faces at the rally included Rep. Marjorie Taylor Green (R-Ga.) who Trump called "one of my favorite people," and MyPillow CEO Mike Lindell, who repeated his claims about the 2020 election being "stolen." Lindell is being sued by Dominion Voting Systems for defamation over discredited accusations that the company engaged in election fraud.

CULLMAN- Fans of former President Donald Trump began lining up outside the parking areas around the York Family Farm early Saturday morning and by the time the gates opened slightly after 2 p. m. the line of attendees stretched down the property.

At first there was only one, then as the week went on, a trickle. But by Friday — a day before Donald Trump was set to stage a GOP-hosted rally in Cullman’s backyard — the sea of pro-Trump pop-up merchandise shops lining the city’s major thoroughfares had grown almost too numerous to count.

With Cullman Regional experiencing overcrowding due to the COVID-19 pandemic, the city of Cullman will be providing more first responders to this weekend's Alabama GOP rally.