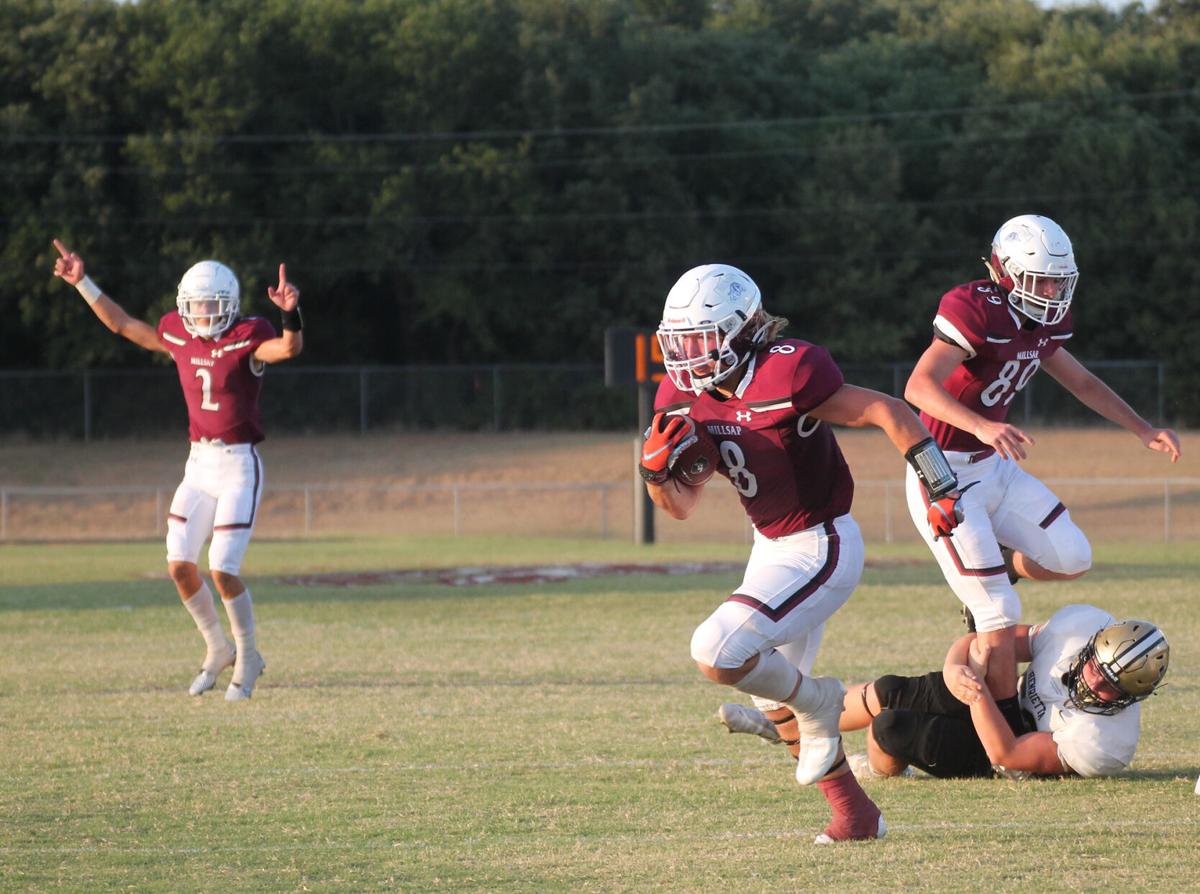 Millsap's Waylan Dunn weaves his way through the Henrietta defense on the way to the end zone. 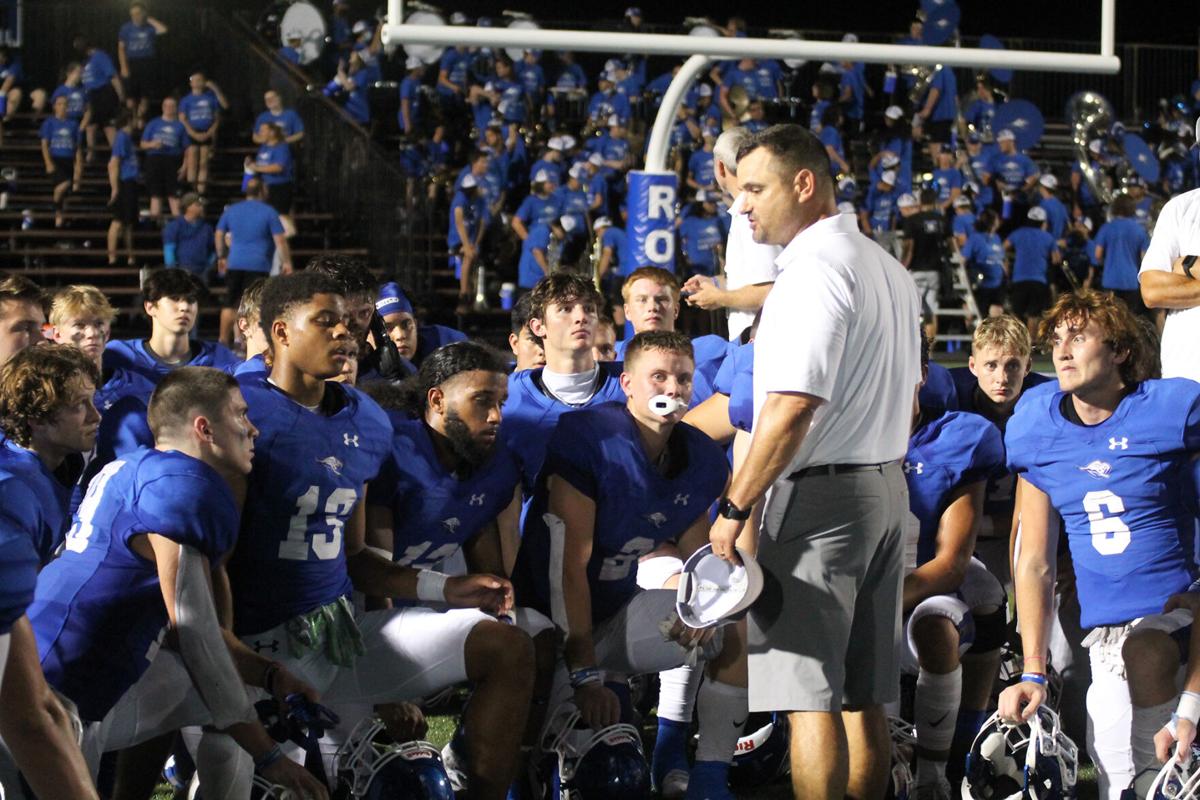 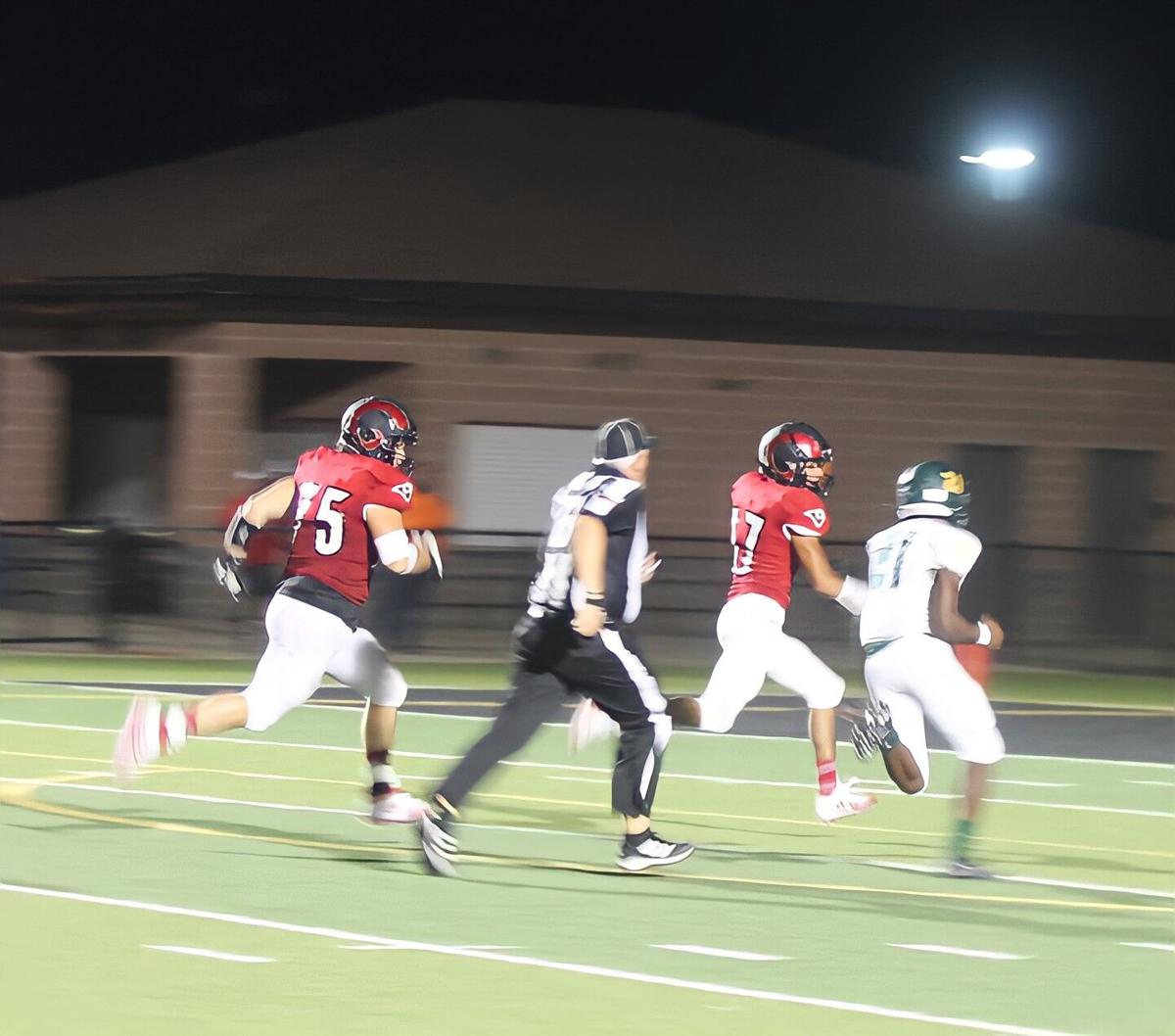 Gustavo Gonzalez carries the ball for the Rams Friday night during their 33-20 Homecoming win over Western Hills. 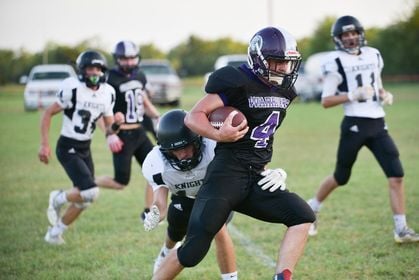 The Mineral Wells Rams cashed in early on Cougar miscues in Friday’s 38-20 win over the Western Hills Cougars and held a lead throughout the Homecoming night game when the Fort Worth squad came within 11 points midway through the fourth quarter.

“We gave all our breaks back in the second half,” Coach Seth Hobbs said after the game, crediting a stiffening defense with pushing back Cougar challenges in the second quarter to secure the win and a 2-0 record for the first-year head coach.

“The defense was outstanding,” Hobbs said. “The defense played their tail off. (The Cougars) are a really tough team, and tough to tackle.”

Ram secondary defenders throughout the match prevented a slough of long balls as Hobbs’ D successively created third-and-long situations for the Cougars.

Mineral Wells got off to a 19-0 lead late in the first quarter, courtesy in part to three Western Hills fumbles.

Quarterback Mason Facteau’s 8-yard connection to running back Tristan Gray capped a 32-yard drive as the first quarter wound down with the Rams in command.

A Facteau pass to tight end Landon Russell brought the Mineral Wells lead to 31-6 at the half.

The Cougars scrapped their way to a 31-20 deficit with 8:13 to play in the game, but another Gray touchdown reception a minute later sealed the Rams’ win.

When asked how it felt to get his first win as a Kangaroo, "pretty good," Weatherford Head Coach Aubrey Sims said, "although it was a little scary there for a second."

The Kangaroos held off Crowley on their home turf — and on Senior Night no less — Friday night, coming away with a 36-33 victory.

After the game, Sims told his team how much they had improved since the week prior, a loss to neighboring Aledo.

With the Roos leading by 10 late in the fourth quarter, Crowley put together a drive down field, but the Weatherford defense came up huge with an interception on their own 4-yard line.

The Eagles would find their way into the end zone in the final minute, but the Roos were able to take a knee of their possession to run out the clock.

The Millsap Bulldogs looked feisty in their home opener Friday night, and went toe to toe with Henrietta, ultimately falling in a heartbreaker, 41-40.

One might argue that the difference came in a two-point attempt midway through the second quarter. The Bulldog ball carrier looked to have broken the plane, but the refs ruled him down prior, and Head Coach Jake Johnson's protests fell on deaf ears.

Waylan Dunn was a workhorse for Millsap, scoring three of his touchdowns in the first half, helping the Bulldogs to an 18-13 lead at the half.

The Brock Eagles had little to no trouble taming Nevada Christian Friday night, coming away with a 47-13 in on the road.

It wasn't very close at halftime (20-6) and the Eagles continued to pour it on in the second half.

Quarterback Tyler Moody ended the night 11-of-17 passing with four touchdowns, two of them to Zach Brewster.

The Peaster Greyhounds are now 2-0 after beating Alvord, 56-12

Gunner McElroy threw for a whopping 314 yards on 19-of-27 passing with five TDs.  Tramar Gilbert only needed 63 rushing yards to net two TDs.