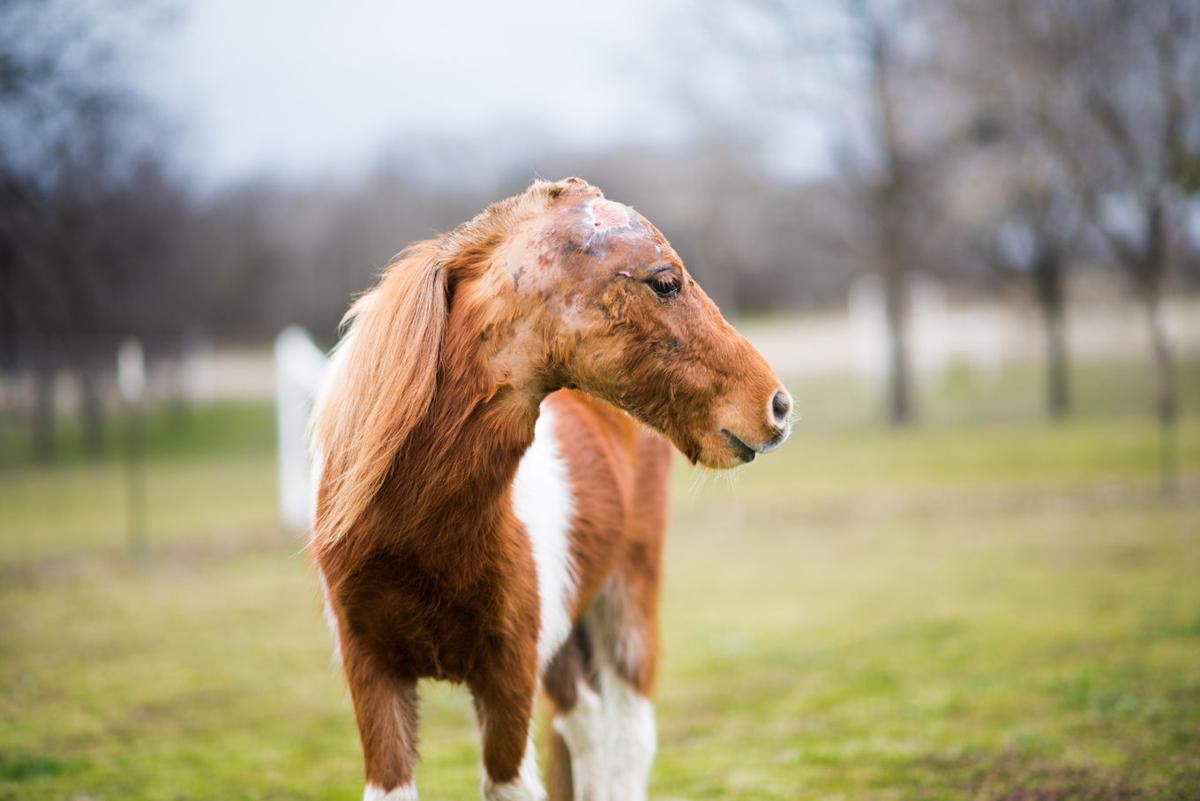 After a refreshing bout of running and jumping around outside, Evander, a Shetland pony recovering from a severe dog mauling to his head, pauses to breath in some fresh air. For the past month and a half, he has had to spend much of his time out of the elements, undergoing intensive veterinary care provided by Craig Sweatt, DVM. 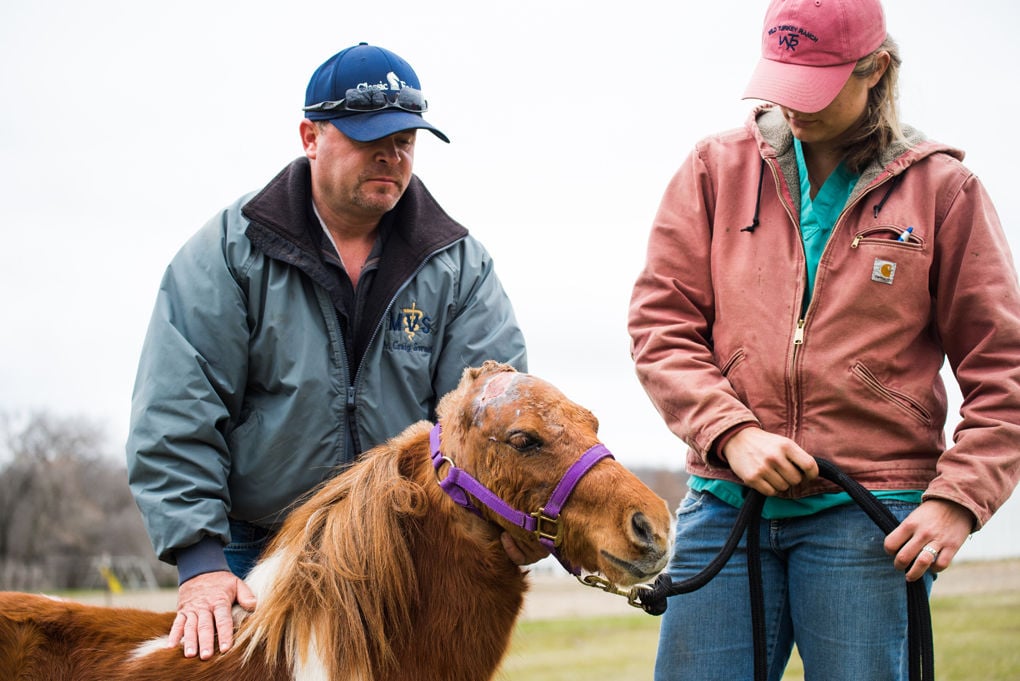 Above, Craig Sweatt, DVM, and Katelyn Belvin, LVT, prep Evander to go back inside and rest.

After a refreshing bout of running and jumping around outside, Evander, a Shetland pony recovering from a severe dog mauling to his head, pauses to breath in some fresh air. For the past month and a half, he has had to spend much of his time out of the elements, undergoing intensive veterinary care provided by Craig Sweatt, DVM.

Above, Craig Sweatt, DVM, and Katelyn Belvin, LVT, prep Evander to go back inside and rest.

MILLSAP — Evander is a mighty horse, not in stature, as he weighs approximately 180 pounds, but in resilience.

When euthanasia was considered after the Shetland pony suffered what appeared to be a violent dog attack to its head, Craig Sweatt, DVM, owner of Mobile Veterinary Services, stepped in to give Evander a fighting chance.

“I saw an animal that needed help, and he didn’t want to die,” Sweatt said.

Parker County Sheriff’s animal control officers responded to a call in the 100 block of Arvel Drive near Azle Feb. 3. The officers found the maimed Shetland wandering along the road.

“The Shetland had no ears and the facial muscles had been ripped off of its face,” Parker County Sheriff Larry Fowler said. “It’s a senseless tragedy that could have been 100-percent avoidable had the horse’s owner simply followed the law and kept it properly contained.”

The owner, Juan Gabriel Mesta, 40, of Azle, who allegedly had the horse tied to a tree in an area without proper fencing, was charged with cruelty to livestock animals. He was released on $2,500 bond Feb. 4.

Mesta told officers that he watered the pony every other day and it was unharmed when he checked on it the day before, according to the sheriff’s office. Investigators questioned the time frame Mesta described, as officers noted a strong smell of infection on the animal.

The scene of the attack was described as gruesome, covered with tracks, horse hair and blood.No water source was found within reach of where the pony had been tied, according to the sheriff’s office.

Approximately a month and a half later, Evander is recovering very well, Sweatt said, and only requires about another month before he can leave.

His treatment consists of several elements, Sweatt said, including laser therapy, which is ongoing, antibiotics and pain management and proper bandaging. The pony’s natural healing abilities also play a key part in his recovery, he added.

“He’s off antibiotics,” Sweatt said. “He was on antibiotics until I got the skull covered. ... And he was on pain management for the first three weeks. After that, he showed no signs of pain. I actually used a hydrogel bandage that they use on burn patients ... and that really expedited the healing process. ... We actually fixed the bandage [with] a piece of pantyhose and slipped it over his head, and that’s how we would keep the bandage on because you couldn’t tape it.”

Beyond having his skull exposed, his eyelids were badly damaged and the fatty tissue behind his left eye had to be put back in place, as his eye had fallen into recess.

His vision in both eyes is great now, Sweatt said.

“When he first came in, he had so much swelling and tissue trauma over his eyelids, I was worried about the nerves that innervate the lids,” Sweatt said. “He couldn’t even open them. Once I got all that swelling to come down, he was able to blink. It was only the first two weeks that I didn’t really know how good his vision was going to be. He sees totally fine.”

Although Evander lost his ears in the attack, he was able to slip out of his harness and escape because they were gone, Sweatt said. His eardrums remained intact, but the wounds sustained on each side of his head had to heal over, closing off the ear canals. Even if there had been a way to prevent the canals from closing, Evander would have no protection from the elements without his ears, Sweatt said, which would have led to frequent infections.

Unlike the emotional trauma a person might experience after losing his or her hearing, Evander is just happy to be alive, Sweatt said.

“Animals are just so resilient,” he said. “People worry about how he’s going to act and worry that he is depressed that he can’t hear, but he doesn’t care. He’s very resilient. ... If this were you or I, you’d be very depressed looking at multiple surgeries. Man, life goes on to them. He’s just glad to be out of that environment.”

Post traumatic stress symptoms can occur in animals, Sweatt said, but Evander is unmoved by the sight of Sweatt’s pet dogs.

Sweatt is also ensuring Evander’s overall health is restored. The tiny horse was underweight but has put on about 35 pounds since entering into Sweatt’s care. He has also been de-wormed.

His future home is still to be determined and is up to Fowler’s department, Sweatt said.

“It’s going to be kind of a special place ... having no hearing,” he said. “He’s not going to be able to be kicked out in a pasture, he’s going to have to be in close quarters with other animals. He is bright and alert, he just doesn’t have the ability to hear.”

Donations for Evander’s treatment and care are still being accepted. Those wanting to give can do so by sending a check marked for “Shetland” to Mobile Veterinary Services, P.O. Box 523, Millsap, Texas 76066.