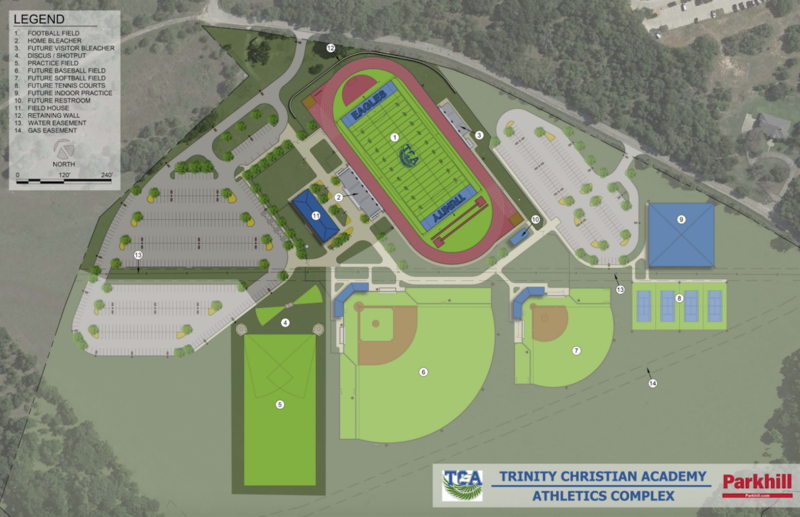 That may not always be easy for some but for the students, parents, staff and leadership at Trinity Christian Academy, it’s second nature.

Throughout its 28 years of existence that began with just 10 students, being “grounded in faith” is exactly how the school has grown to more than 500 children.

At a special meeting to announce the “Grounded in Faith, Growing in Excellence” capital campaign, Head of School Mike Skaggs and board vice president Bert Thompson outlined the various phases of what’s been done and what still needs to be completed.

“We spent a lot of time in prayer,” Thompson said. “We discussed, we argued and at the end of the day, we decided the goal was to stay in step with God and it was time to move forward.”

Attendees at the event were shown videos that highlighted the phases that have essentially been completed and then given a glimpse of the vision that is happening.

Completed at the end of last year, the playground is located next to the preschool classrooms and has been well received.

Next on the list was the need for more classroom space. With increased student population, Skaggs recalled a time when there were portables scattered on the campus and that just wasn’t going to work long-term.

“That secondary annex touches every single student,” he said, adding that it gives sixth graders a place to call theirs but also provides them a safe place to transition into the higher grades.

Skaggs quipped that the day the portables were towed off was “a good day” but that it the time of need, its purpose was met.

The final need that TCA is taking the leap of faith and working on is for the athletic programs. It is one of the largest in terms of size and scope, as well as financially.

Included will be a football field, and eight-lane track, room for 1,000 fans and a pressbox, a full-size practice field, cross-country trails and a 6,600 sq. foot fieldhouse, equivalent to the size of the Barber Gym.

“When I was an English teacher, athletics was one of the things I turned my nose up to,” Skaggs admitted. “But I now know how wrong I was.”

Skaggs went on to say that he sees the lessons children are taught by participating in sports, something he says he could never have taught in a classroom.

Adding to that, Skaggs said one of the biggest components of athletics is having a home field; a place for students and fans to gather that has the moniker “Eagles” on it.

“I would love for this project to be something that will be a benefit and blessing for the community of Willow Park,” he said.

More importantly, however, is the added component of safety for the TCA athletes. Right now, athletes are having to travel for “home” games and some are even practicing in parking lots because there isn’t a place for them to do it otherwise.

“This is happening; we are doing it,” Thompson said. “We will be moving dirt this month.”

Overall, the athletics project is estimated to cost $6.9 million and a second phase is in the planning stages that will include softball, baseball, tennis and an indoor training facility but raising money for the first phase is top of mind at the moment.

As of the end of March, a total of $4.3 million has been raised, short of the overall $7.6 million cost of the playground, annex and first phase of the athletic needs.

“Many people are afraid of growth but not us, we embrace it,” Skaggs said. “God gave us our purpose and we believe this stays true to who we are.”

While pledge forms were handed out at the meeting, Skaggs actually requested that people wait to turn it in until they had more time to pray about it and decide what they were led to give.

Trinity Christian Academy is now enrolling for fall classes with limited space remaining in many grades. For more information regarding admissions or the Grounded in Faith, Growing in Excellence capital campaign, visit tcaeagles.org.