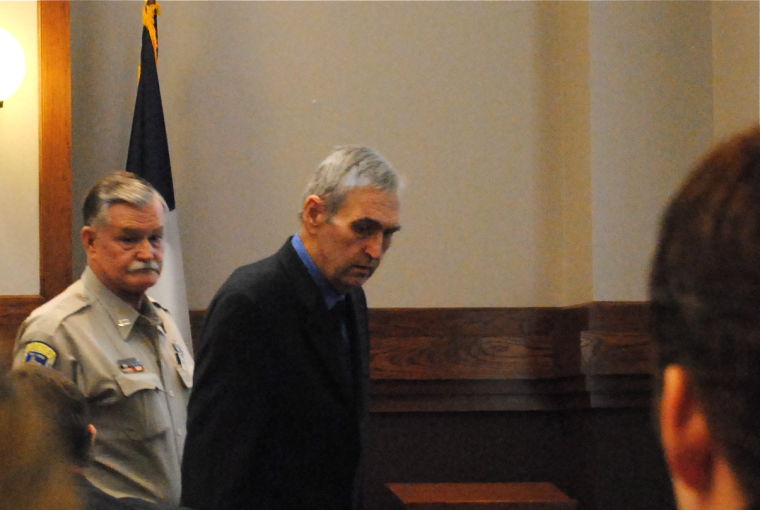 Jeffrey Allan Maxwell enters district court Tuesday morning for the start of his trial for aggravated kidnapping and two counts of aggravated sexual assault of a Whitt woman. 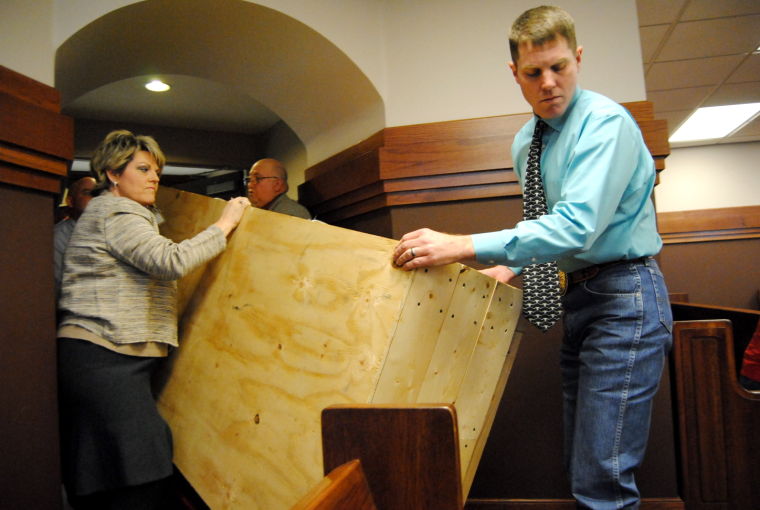 Prosecutors bring in a box that they plan to introduce into evidence. Earlier on Tuesday, prosecutors said Jeffrey Allen Maxwell, on trial for aggravated kidnapping and aggravated sexual assault, held his victim, bound and gagged, in a box.

Jeffrey Allan Maxwell enters district court Tuesday morning for the start of his trial for aggravated kidnapping and two counts of aggravated sexual assault of a Whitt woman.

Prosecutors bring in a box that they plan to introduce into evidence. Earlier on Tuesday, prosecutors said Jeffrey Allen Maxwell, on trial for aggravated kidnapping and aggravated sexual assault, held his victim, bound and gagged, in a box.

The following story contains some graphic details, presented at trial on Tuesday. Some readers may not be comfortable reading these details.

The Whitt woman prosecutors say Jeffrey Allan Maxwell kidnapped and held for 12 days while torturing and sexually assaulting her, described her ordeal minutes after she was found at his Corsicana home in a recording played for jurors Tuesday.

“[He] pulled me up in the air and scared me to death,” the woman, Maxwell’s former neighbor, said, describing how prosecutors say Maxwell hoisted the woman several feet above the ground on a homemade bar and winch system in his garage before undressing her and repeatedly whipping and sexually assaulting her.

Maxwell, 60, who pleaded not guilty on all charges Tuesday morning, is on trial on one charge of aggravated kidnapping and two charges of aggravated sexual assault.

Jurors got a look Tuesday at law enforcement photographs of Maxwell’s garage, home and vehicles shortly after investigators went to serve a search warrant at the property and the woman came out the door saying she was there.

Whips, handcuffs, firearms, sexual aids, a blood-stained winch controller, wads of duct tape, stained women’s underwear, and a large wooden box were among many items of note throughout the cluttered home, according to evidence presented to jurors.

Investigators testified a missing persons investigation began after the woman’s home on Old Oran Road burned down March 3 and led them to Maxwell’s home in Corsicana on March 12. The Parker County Sheriff’s Office was able to obtain a search warrant for one of Maxwell’s vehicles on March 12 based on a neighbor’s description of a vehicle seen driving in the area at the time of the fire and a check from the woman cashed that week by Maxwell, who had a vehicle registered matching that description.

While speaking with Maxwell, who declined to let investigators inside and denied he’d seen his former neighbor in years, investigators said they saw the woman open the door and come out saying she was there.

The woman initially said family members were trying to kill her but after further questioning told investigators Maxwell hit her with a rolling pin and pulled a gun on her while taking her from her house.

“It’s not him. It’s my two half-brothers,” the woman said in a voice recording made immediately after she came out of the house and played for jurors. “They want me dead.”

“He forced me in the house so he could tie me up and put me in his vehicle,” the woman said after Sgt. Ricky Montgomery of the Parker County Sheriff’s Office pressed her about what happened. “I managed to get loose.”

After Maxwell went to his vehicle, the woman said she escaped her home out another door.

The woman also described Maxwell’s actions after he brought her to his home in Corsicana.

“When he brought me here, he was really mad,” the woman said, attributing his anger to the fact that she attempted to escape.

“He was mean to me,” the woman said moments later.

When asked if she knew her house had burned down, the woman said she found out on the news and though Maxwell said the house needed to be burned, Maxwell had told her a neighbor did it.

“He told me [Maxwell’s] fingerprints are all in that house, that house has got to be burned,” the woman said, adding she told him no.

During the prosecution’s opening statement Tuesday morning, Assistant District Attorney Kathleen Catania told jurors she believes the evidence will show that the simple and devoutly religious woman was abducted from her home and repeatedly assaulted and abused over the 12-day period, including being chained to the man’s bed.

Catania also told jurors they intend to show evidence that the woman was bound hand and foot and gagged before being placed in a box, where she bruised her knees trying to escape.

A large wooden box, nearly coffin-like in dimensions, photographed underneath a shelving unit was pointed out to jurors Tuesday afternoon.

In addition to items found at the property, doctors and law enforcement detailed the woman’s extensive injuries that included a broken shoulder, deep cuts to her hands and bruising across her body and face.

An investigator with the Parker County Sheriff’s Office who arrived at the house shortly after the woman came out the door and Maxwell was taken into custody described her as “very confused” and appearing to be “severely abused.”

As he was taking pictures of her immediate visible bruising at the scene, the woman appeared to see the reaction in his face and lifted her shirt as if to show him that those injuries weren’t her worst, the investigator told jurors.

Asked to describe the woman’s condition when she arrived at the hospital, responding Navarro County Sheriff’s Office Deputy Melanie Cagle said the woman appeared “Frail. Small. Beaten. It was immediately apparent that she had a lot of trauma to her face. She looked pitiful.”

The woman appeared to want to tell her story, Cagle testified.

“She was non-stop talking, very excitable,” Cagle said. “I never asked her one question.”

Jurors were shown pictures of bruises and scrapes covering her body, including bruising underneath her eyes, on her throat, behind her ears, across her breasts, her back, her buttocks, her arms, her legs, her hands and her fingers.

“She appeared to be maybe malnourished and unkempt,” Navarro Regional Hospital Emergency Room physician Charles Vinson told jurors, adding, “She had multiple abrasions and bruises pretty much head to toe.”

What was initially believed to be a dislocated left shoulder turned out to be broken shoulder bones that had significant swelling and bleeding, according to Vinson. Deep cuts on her hand did not appear to have received necessary medical treatment, he said.

Friends and family of the woman were in attendance Tuesday, as well as the family of Maxwell’s former wife, Martha Martinez-Maxwell, including the couple’s son.

Maxwell went missing in 1992 after what her family described as a turbulent, abusive marriage and has not been located.

In 1987, Maxwell was found near Interstate 35 north of Ardmore, Okla., severely beaten and her throat cut from ear to ear.

According to court records, Maxwell told an investigator that she and her husband had argued when he began beating her and, after going to sleep, awoke to find her hands bound behind her back with duct tape.

He shocked her breasts with an electrical device, sexually assaulted her and forced her to drink a mixture of alcohol and drugs and she didn’t remember anything else about the assault or how she arrived in Oklahoma, Maxwell reportedly told the investigator.

However, a Tarrant County grand jury declined to indict Jeffrey Maxwell in that case, according to law enforcement.