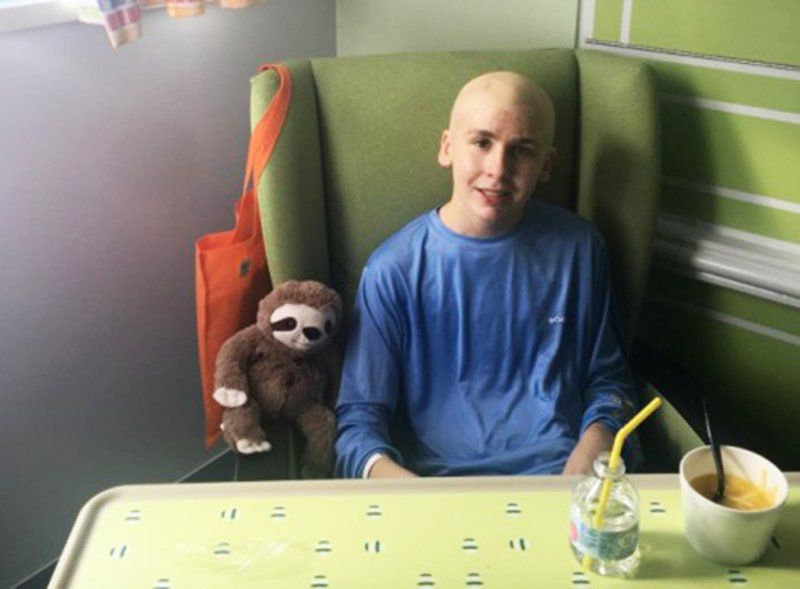 Thirteen-year-old Joey Belles and his spirit animal, the sloth. 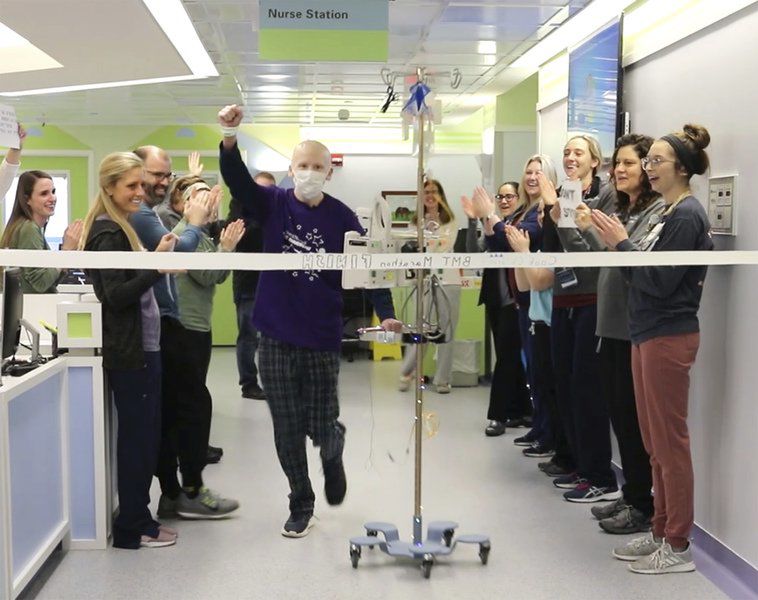 Joey Belles crosses the finish line marking 26 miles of walking, the equivalent of a marathon, on Feb. 20 at Cook Children’s.

Walking into 13-year-old Joey Belles’ hospital room, it’s hard to miss the abundance of sloths. There are stuffed sloths on tables and sloth stickers on the walls. The sloth is Joey’s spirit animal, though you wouldn’t know it by looking at him now.

“Our Joey likes to move at his own pace,” his mother Denise Belles said.

Joey arrived at Cook Children’s in June of 2019. What his family thought were headaches from recent growth spurts and allergies turned out to be a rare form of cancer called pineoblastoma. A tumor was growing in his head and spinal fluid was building up in his brain.

“At the time, he was going to football camp and loved it. Then we did the CT scan and within days, we got the diagnosis that changed our lives forever,” Denise said.

On July 3, Cook Children’s neurosurgeon Daniel Hansen, M.D. removed Joey’s tumor. Luckily, Dr. Hansen was able to get the entire mass at once. From there, Joey began a strict regimen of proton radiation therapy. In November, he was admitted to Cook Children’s Bone Marrow Transplant Unit to begin stem cell chemotherapy.

“It was really hard on his body,” Denise said. “You deplete [patients] of everything and start from scratch. But the doctor said to Joey, ‘You don’t have a shot if you don’t have the right attitude.’ So we came up with a plan and no matter what, we were going to be positive about it.”

Part of the plan came together after a visit with a physical therapist. She asked Joey to start walking and told him that if he kept track of his progress, he could win a gift card once he hit 10 miles. The incentive is part of a new program at Cook Children’s called Miles in Motion which encourages hematology/oncology patients to get moving.

“When I first got here, I was sick and I was moving pretty slow,” said Joey. “We started walking the first day, but I could only do two laps.”

Joey would log his walks on a piece of paper in his room. Soon, the papers began piling up as he started making multiple laps around the unit.

Physical therapist Lydia Robey was part of the team that came up with the idea for Miles in Motion as part of a quality and safety initiative to get patients out of their beds and exercising.

“We were brainstorming how to increase activity for this particular group of patients and one of our dieticians pointed out that these kids were losing muscle mass at a far greater rate than they should,” Robey said. “Some of that was due to inactivity, as well as steroids and medications that cause muscle atrophy. We started reviewing the literature and the evidence just became overwhelming of how important exercise is.”

Robey said due to varying blood counts, patients are not always able to do resistance exercise. However, she says walking is always good.

“Everyone agrees that walking is safe, so we wanted to find a way to motivate and empower families and patients to start walking as part of their daily routine,” explained Robey.

Joey and his parents did just that. They committed to walking each day during his four separate hospital stays, which spanned between two and four weeks each.

Before he knew it, Joey was walking more than 30 laps at a time, a feat that seemed impossible when he first started.

“There really is a noticeable difference between the first time I saw him and how he is now,” Haleigh Schreck, one of Joey’s physical therapists, said. “He walks every single day on his own, no matter what he’s going through treatment-wise. His drive and motivation are very impressive.”

Earlier this month, Joey hit a milestone that not even his physical therapists thought was possible. Joey marked off his 26th mile in the Miles in Motion program, which is equivalent to walking an entire marathon. Walking a marathon was never even a goal for Joey or for the Miles in Motion program, but as he got closer to mile 26, he said he knew he had to go for it.

“We were just like, we’re this close to getting a marathon and I decided ‘I’m gonna do this,’” he said.

On Feb. 20, Joey made his final laps around the unit were he’d been walking for the past four months. This time, nurses, child life specialists and physical therapists lined the walls. They held up handmade signs and cheered him on. With just five laps to go, Joey took one step at a time, thanking his mom and dad for their support as they finished the journey together.

At the final lap, excitement built as the medical staff cheered his name. “Joey, Joey, Joey!” they chanted until breaking into a loud roar as Joey ran through the finish line, a paper streamer strung across the hallway.

He did it. Joey walked a marathon.

“It was awesome,” he said afterward. “I could have never done it without my family, the whole team we have. Everyone has been so supportive of me. It’s just truly amazing what we have done, me and my parents.”

This wasn’t the first marathon completed by a member of the Belles family. Denise ran the New York marathon in 2010, but said this one was much better.

“This one is more rewarding,” she said. “His training was harder. I definitely feel more fulfilled with his than mine. It means so much more.”

If that wasn’t enough, finishing a marathon wasn’t Joey’s only major accomplishment of the day. It was also his final day of chemo.

“In the beginning, I really thought this was going to be devastating,” said Joey. “But everyone has been helping me and pushing me. With them, I knew I could get through this and do it with power.”

While he did have a supportive family and medical team, Joey also did what his doctor advised and had the right mindset throughout his cancer journey.

“Joey has been an amazing patient to work with,” Schreck said. “I can’t remember a time when he wasn’t just smiling and having the most positive attitude. He blew all of our expectations out of the water.”

“I’m so proud of him. It shows how if you have the right mindset then you can overcome anything,” Denise Belles said.

With his treatment coming to an end, Joey and his family are making plans for the future. They’re downsizing to a smaller home so they can take more trips together. This summer, they hope to go to Italy.

“We’re a close-knit family. We just love being together, but this has brought us so much closer,” Denise said. “We don’t want to wait to do stuff, like travel, anymore. We enjoy each other and we don’t take anything for granted.”

This article was provided by