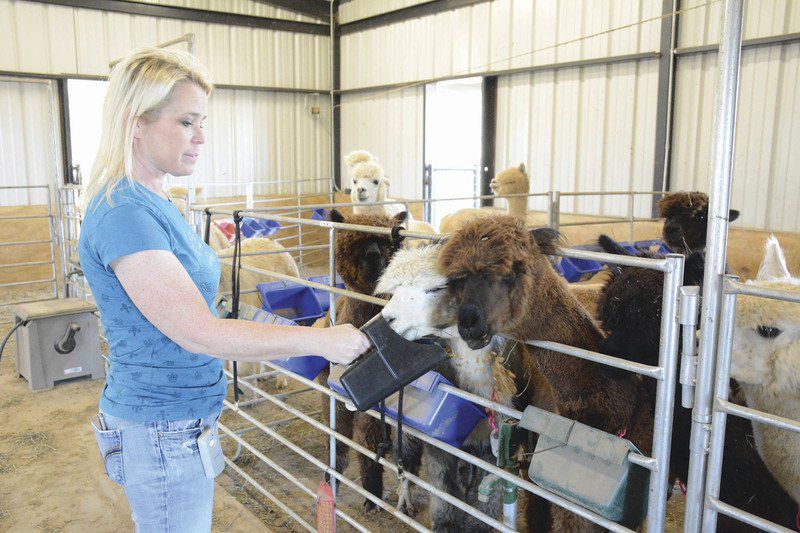 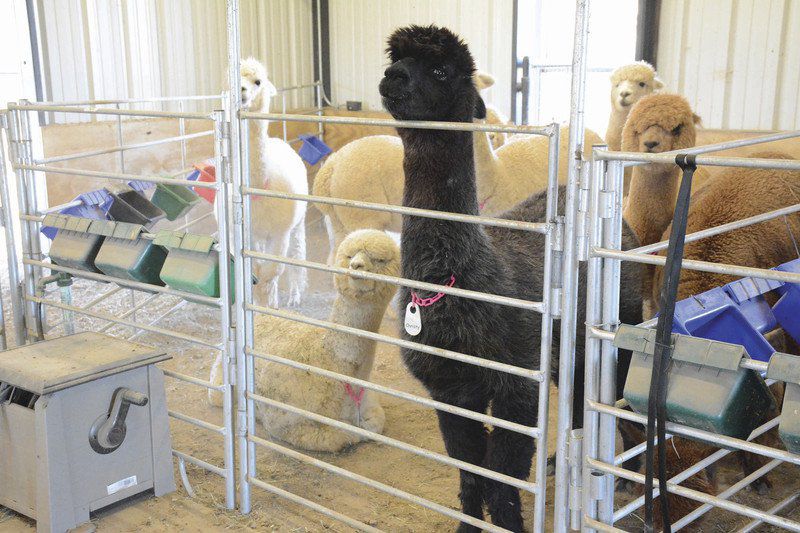 Old Annetta Road in Aledo is dotted with pastures filled with cattle and horses, but there’s one pasture in particular that has drivers stopping for a closer look at its unusual inhabitants.

Alpacas of Aledo was founded in August 2016 by Jayme Haney and her husband, Dustin, who also own and operate DK Haney Roofing.

Their journey to founding an alpaca farm began for one simple reason – Aledo ISD taxes.

“When they raised Aledo school taxes again, my husband and I decided we needed an Ag write-off,” Jayme Haney said. “We started thinking about it, and I started reading about alpacas. Two of my three boys are special needs, and I saw that they were good for kids with special needs because of their demeanor.”

The couple visited a friend in Burlseon who had an alpaca farm, and learned she was looking to sell the animals.

“She had 24 alpacas and had to get rid of most of them because of her health issues. She couldn’t take care of them,” Haney said. “We said, ‘Make us a deal, and teach us everything we need to know and we’ll take them over.’”

The Haneys threw themselves into learning all there was to know about alpacas as they searched for land that would be suitable for the farm.

By August 2016, the family built a house, barn and pastures off Old Annetta Road in Aledo. They moved in with the alpaca herd on Aug. 1, 2016.

Seven months later the herd has grown to 44 alpacas and counting, as several of the females are pregnant.

The alpacas have drawn hundreds if not thousands of visitors since August, Haney said.

“We did an open farm day recently, and in three hours, we had over 300 guests here. It was insane,” she said. “Since we moved here, on a daily basis we have visitors come by all the time. It’s been pretty amazing.

“The neighbors absolutely love it, because alpacas are so different. They’re quiet, so it’s not like you hear them making a lot of noise. We have not had one complaint, except for when we had our farm day because there were cars going up and down our street. People are stopping all the time to take pictures.”

The farm’s watchdogs – a pair of Great Pyrenees named Bonnie and Clyde – are also a draw for visitors, Haney said.

“[Bonnie and Clyde] have an even greater following,” she said. They’re so big, but they’re so lovable. And they’re great with the alpacas. They’re actually the the go-to dog for Alpaca farming.”

Bonnie is expecting puppies, which the Haneys will likely sell at an alpaca show in the future. Alpacas of Aledo has competed in several livestock shows, netting several blue ribbons at shows in Fort Worth, Houston and Oklahoma, Haney said.

The Haneys will shear the alpacas in April, and use the fleece to make the variety of products sold in the family’s farm store.

“We’ve got everything in our store,” Haney said. “We make socks, gloves, scarves, teddy bears… we also use the fleece to make felted soaps and dryer balls, which you can use in your dryer instead of fabric softener sheets.”

The farm’s income will also be supplemented by selling breeding rights to the alpacas, as well as selling off some of the baby alpacas when the herd starts to get too big.

The alpacas have been a blessing for the couple’s two special needs children, she said.

“My oldest is 21, and he’s special needs. This is his actual job. He gets up every morning to take care of them, feed them, water them, feed our chickens and collect their eggs.

“My 13-year-old is also special needs, and he thinks he can quit school and come work the alpacas... but we don’t have to worry about them in the field. If we had cattle, horses, or any other animal, we’d worry about them out there. Alpacas have such a calm demeanor. The worst thing they’ll do is spit at you, and they really only do that at feeding time.

“Their feet have two toenails, but the bottom of their feet is like a dog’s paw. If they do kick you, it’s from the muscle in their leg more than being injured. They’re not big animals, and they don’t have top teeth. So they can’t bite you.”

But the best part of the experience has been witnessing the joy the alpacas bring to the community.

“The thing we love the most is how much everyone loves these alpacas. We don’t charge people to come see the alpacas, and I would feel ridiculous to charge,” Haney said. “We have schools calling to ask if they can bring field trips, we’ve had daycares, we’ve had youth groups come out.

“People get here and they don’t want to leave. Everyone absolutely loves it. We really love how much joy people have, and we never expected that. We love raising and showing them, but being able to share them with everybody has been great.”

For more information, look for Alpacas of Aledo on Facebook or visit www.alpacasofaledo.com.