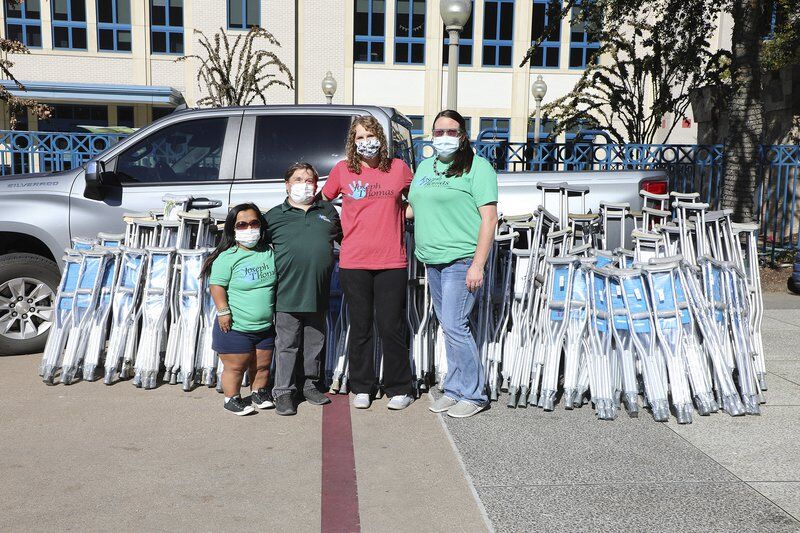 From left, Becca and John Thomas, who founded the Joseph Thomas Foundation, stand with members of Cook Children’s, where they donated 135 pairs of crutches. The hospital had issued a plea for the donations after shortages of aluminum and other supplies. 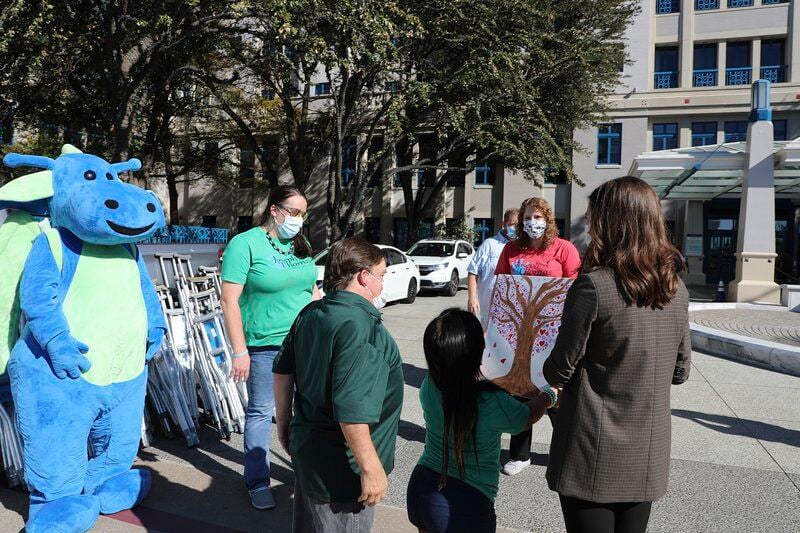 John and Becca Thomas receive a painting done by one of the patients at Cook Children's as a "thank you" for their recent donation.

From left, Becca and John Thomas, who founded the Joseph Thomas Foundation, stand with members of Cook Children’s, where they donated 135 pairs of crutches. The hospital had issued a plea for the donations after shortages of aluminum and other supplies.

John and Becca Thomas receive a painting done by one of the patients at Cook Children's as a "thank you" for their recent donation.

WEATHERFORD — When an area hospital issued a call for help, one of Parker County’s own stepped in.

Cook Children’s Medical Center in Fort Worth announced a need for donations of new or gently used aluminum crutches earlier this month due to shortages of aluminum and other materials related to ongoing global supply chain issues.

As the founder of a nonprofit created to assist medically-fragile children, John Thomas and his Joseph Thomas Foundation stepped up to answer that call in a big way.

“I knew we had access to quite a few [crutches] out in the Abilene area,” Thomas said, “so I called our executive director and she did all the work.”

When Thomas reached out to Cook to let them know about the donation, they encouraged him to bring them in to the lobby.

When they laid them all out, the final count was 135 pair. Some of them were still in their wrappers.

“I’m always thankful for Cook’s and all they’ve done for my kids personally,” Thomas said. “And 90 percent of the kids that we have helped have been in that hospital.”

A representative with Cook Children’s said they have received hundreds of donations from community members.

“We are grateful to the Joseph Thomas foundation for donating more than 130 pair of crutches,” Kim Brown, media relations manager for the hospital, said. “Many, many children will benefit from the generosity of all who donated.”

Helping provide services, equipment or sources is something JTF has fostered and grown since the death of Thomas’s son Joseph at the age of 6 in 2007. His father said they learned about some of the gaps that Medicaid and insurance have with medically fragile children during the course of Joseph’s life.

The foundation has expanded, and now offers two programs.

The grant program helps families whose children may need a special item, such as a lift on the back of a car for their wheelchair.

“Medicaid and insurance won’t pay for that,” Thomas said. “In that case, they fill out an application with us and we go out and purchase whatever it is they’re needing.”

The grant program has a coverage area of 101 counties (Parker County is the farthest east) with plans to add more in 2022.

The closet program is new to the JTF. When the foundation receives donated items — say, crutches — from someone in the community, the items are stored in “closets” or storage facilities in Rockwall, Weatherford, Abilene and Lubbock. When someone calls and requests an item, the foundation takes it and gives it back out to the community.

“Before, all we did was take care of kids,” Thomas said. “Now, we get walkers, crutches, adult wheelchairs. We’re helping even more people, and the neat thing is the closet program doesn’t have a geographical area.”

Recently, Thomas got a request from a military family stationed in South Africa for specialized formula for infants with severe allergies or GI disorders.

“We had just gotten 25 cases of EleCare Jr from a family whose child spent a month in the hospital. While they were in the hospital, they continued to send the formula, so this family ended up with 25 cases that they couldn’t use,” Thomas said. “They donated that to us, we put the word out and found a lot of people that needed it.”

Taking care of local requests first, JTF also mailed out shipments to families in Mississippi, New York and Illinois before the call came in from South Africa.

“We said, ‘Absolutely, we just ask that you help us with the shipping cost,’” Thomas said.

The foundation this year has already received more than 800 requests for help through the closet program alone. Some of those items include standers or hospital beds, expensive equipment that one family may not need anymore.

“And Medicare bought it, so it’s not like they can really return it,” Thomas said. “So they contact us. In one of those cases, we never even touched an item, we just connected two families together.”

Thomas gave credit to the staff and board members of the JTF for “keeping the train on the tracks.”

“I don’t really run this foundation, God does,” he said. “I’m constantly amazed about some of the stuff that happens and we’re blessed by the community’s help, not only here but in all the counties we cover.”

For more information on the Joseph Thomas Foundation, visit www.JohnThomasFoundation.org.