Parents of Peaster ISD students say they have filed a formal complaint with the district and multiple county and state agencies claiming the school system’s superintendent made anti-Semitic remarks and other inappropriate or inflammatory statements.

Kjersti Powers and her husband, Frank, accuse PISD Superintendent Lance Johnson of making the remarks during a meeting set for the trio to discuss the Powers’ concerns with the district plan for reopening during the pandemic. 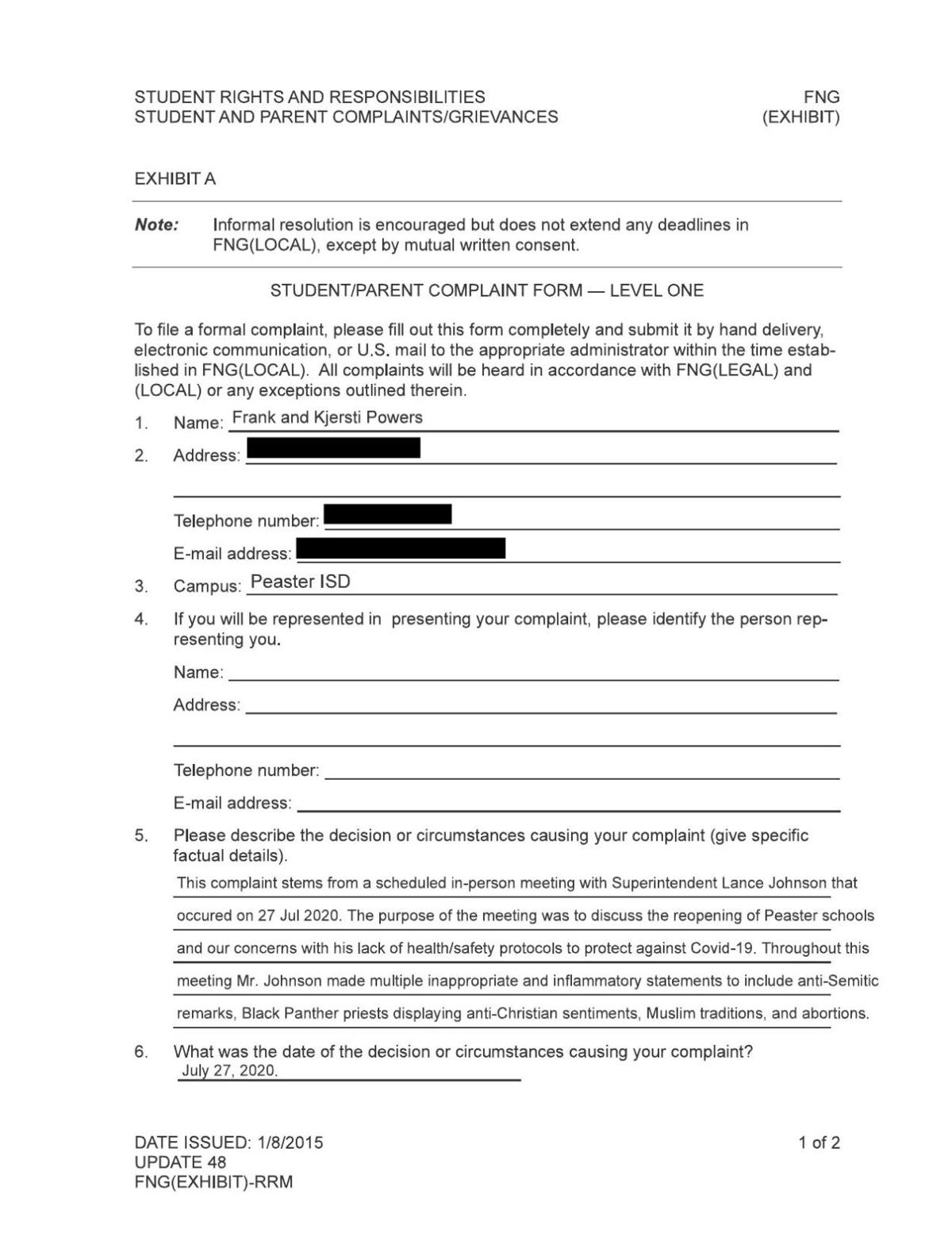 Kjersti Powers said the in-person meeting with Johnson on July 27 was set to discuss the couple’s “concerns with his lack of health and safety standards during the ongoing COVID-19 crisis,” according to a memorandum they later sent to Peaster ISD school board president Mike Bowling with the complaint.

“Regarding the allegations of lack of health and safety protocols, and anti-Semitic remarks, those are absolutely false, and to say otherwise would be slander,” Johnson told the Weatherford Democrat.

Johnson’s statement rebutting the accusations’ accuracy runs counter to the Powers’ four-page account of the meeting they submitted attached to multiple complaints. 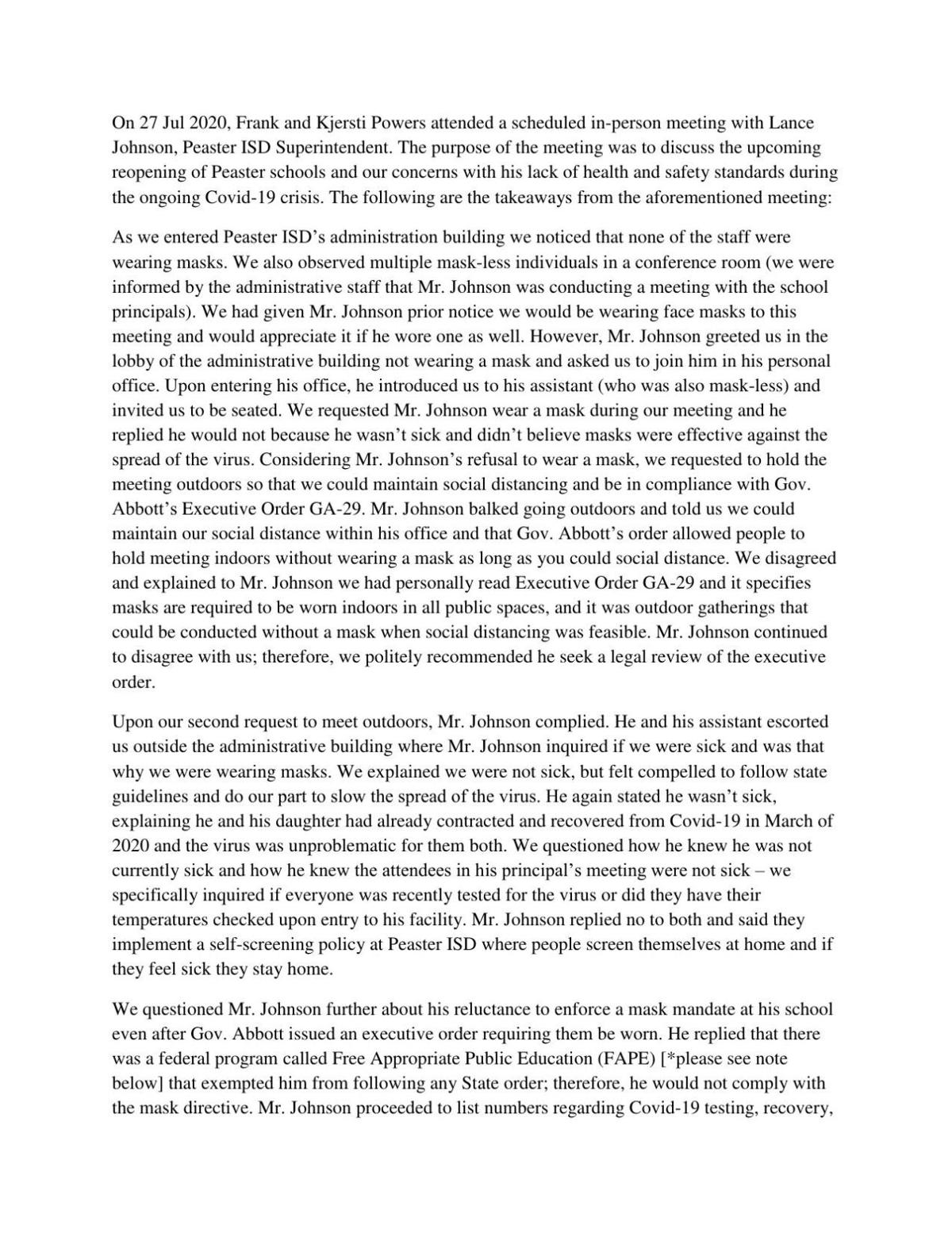 “Throughout his meeting Mr. Johnson made multiple inappropriate and inflammatory statements to include anti-Semitic remarks, Black Panther priests displaying anti-Christian sentiments, Muslim traditions, and abortions,” according to the complaint sent to PISD.

The couple said, during the July 27 meeting, they questioned Johnson’s reluctance to enforce a mask mandate at his school even after Gov. Greg Abbott issued an executive order requiring them to be worn.

Johnson referenced a federal program called Free Appropriate Public Education that exempted him from following any state order; therefore, he would not comply with the mask directive, according to the memorandum, and also cited that case numbers in Parker County were going down after multiple events without masks and social distancing, showing that COVID-19 is not a serious threat.

“Safety is our top priority, and we do not believe that our students or staff will be in harm’s way, as recent illnesses have had little impact on our community,” Johnson told the Democrat. “We can continue to provide a safe learning environment face-to-face in Peaster ISD, meet the expectations of parent choice from our community and board of trustees, and continue to provide a free and appropriate education as required by federal statute.”

A copy of a slide show presentation at a Peaster ISD town hall on July 28 notes results of several parent surveys addressing face mask coverings, statistics provided by the Centers for Disease Control and Prevention, the FAPE federal law, and state and county numbers of COVID-19 cases. 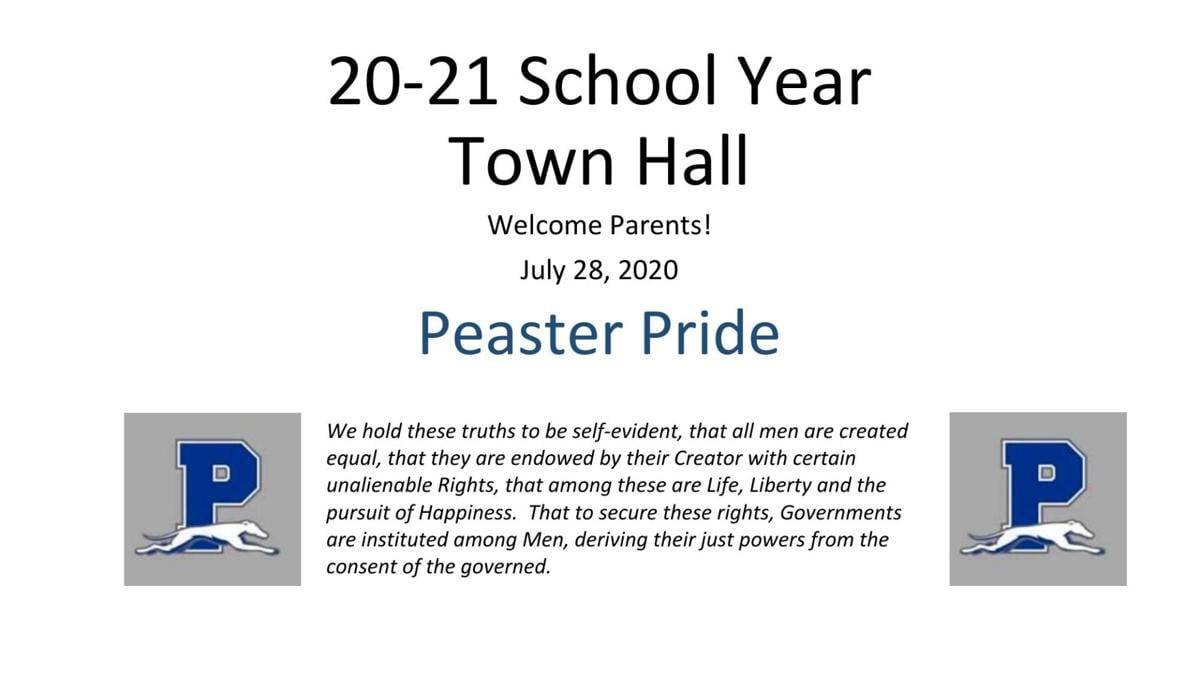 The slide show also lists the district’s mitigation efforts, including daily self-screenings for flu/COVID symptoms for staff, parents and students, a flu-COVID symptom questionnaire for school volunteers and required temperature checks for staff, students and parents who show symptoms for flu/COVID while at school. One section also notes that “PISD welcomes all staff, students and parents who choose to wear a face covering” and that the district will have a limited supply available for students, staff and parent volunteers who want them.

“[Texas Education Agency] currently requires schools to abide by [Executive Order] GA-29,” Johnson told the Democrat. “We have a strong community partnership where we work together to ensure our staff and students remain healthy, and can adapt as needed based on local circumstances. Peaster ISD will remain focused on providing our students the best education, follow the guidance of our board of trustees as spelled out in the Texas Education Code, and respect federal and state statutes.”

GA-29 directs every person in Texas to wear a face covering over the nose and mouth when inside a commercial entity or other building or space open to the public, or when in an outdoor space, wherever it is not feasible to maintain six feet of social distancing from another person not in the same household, though there are some exceptions to the order.

According to guidelines released by the TEA, schools are required to comply with the governor’s executive order about the wearing of masks.

“Mr. Johnson questioned why the government has not mandated a face mask be worn during flu season when the flu kills more people than COVID-19,” the couple wrote in their memorandum. “Mr. Johnson added that if a mask mandate actually kept people safe, why wasn’t there a mandate to force Jews to wear masks with swastika symbols to keep them safe.”

The couple explained they felt an obligation to stand up for what is right for the safety of their children, which “led Mr. Johnson to make several statements regarding Martin Luther King Jr. taking a stand against Jim Crow laws requiring separate water fountains for whites and blacks,” according to the memorandum. “Mr. Johnson added that similarly, he as the leader of Peaster ISD needed to take a stance regarding face masks.”

The Powers’ complaint was sent to Bowling, who forwarded it to Johnson.

“First, let me start by apologizing for any hurtful or inappropriate things I may have said during our initial meeting,” Johnson wrote in an email to Kjersti Powers. “That was not my intent. It is clear that we disagree on some issues we are facing, but we can remain respectful and courteous with each other, and attempt to have an open mind to see things from each other’s vantage point.”

Johnson went on to give Powers details on the next steps in the process, which include the district scheduling a Level Two hearing in the new few weeks. According to board policy, the complainant has the option for a Level Three hearing — heard by the school board in executive session — if the remedy they seek is denied.

Johnson told the Democrat that the district does not discuss complaints filed under its grievance policies “other than to acknowledge that it has adopted board policies to address formal complaints and all such complaints are handled in accordance with applicable board policies.”

A copy of the Powers’ memorandum and complaint was also sent to and received by the Anti-Defamation League, Texas Education Agency, Office for Civil Rights, the governor’s office, Parker County Emergency Management, County Judge Pat Deen’s office and the State Board of Education.