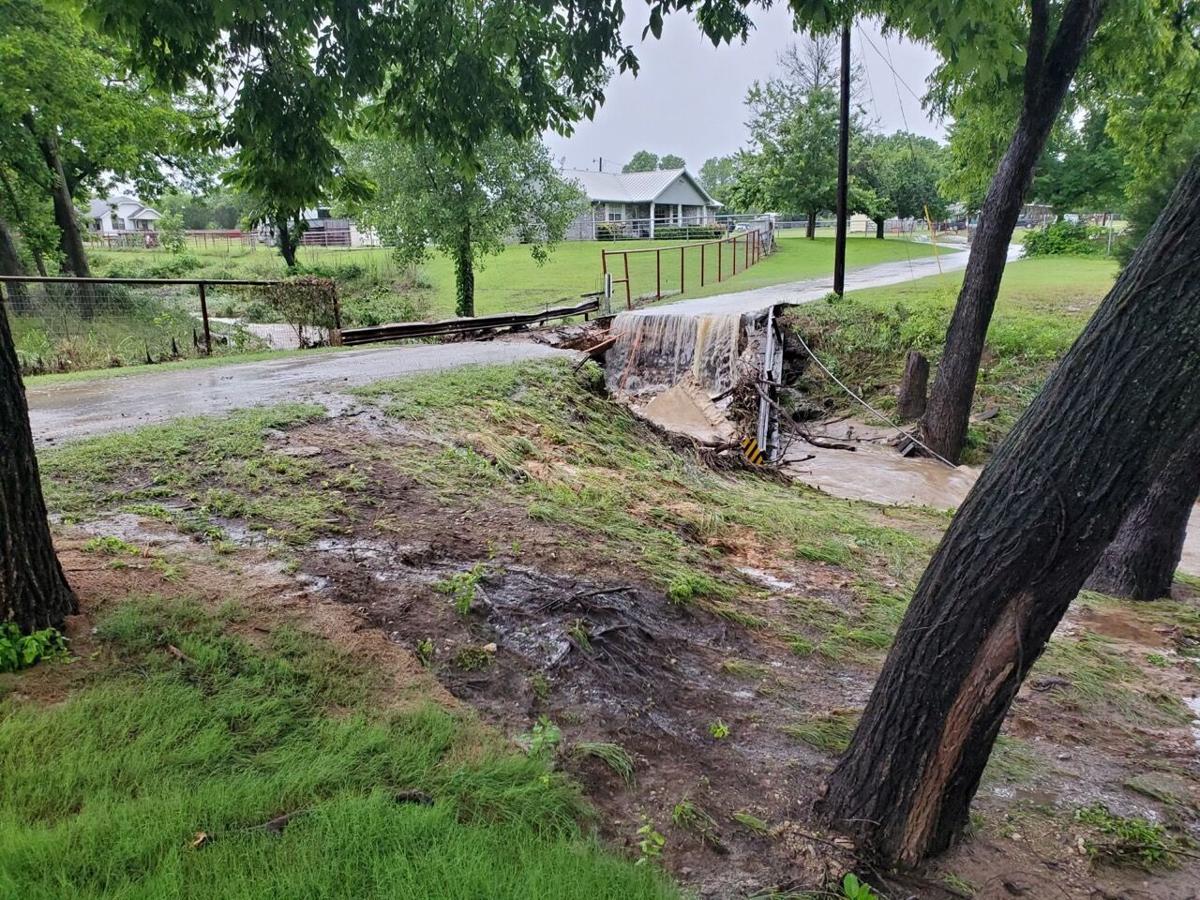 The bridge over a creek in the area of North Boundary Street and North Street washed out as a result of heavy rainfall Monday. 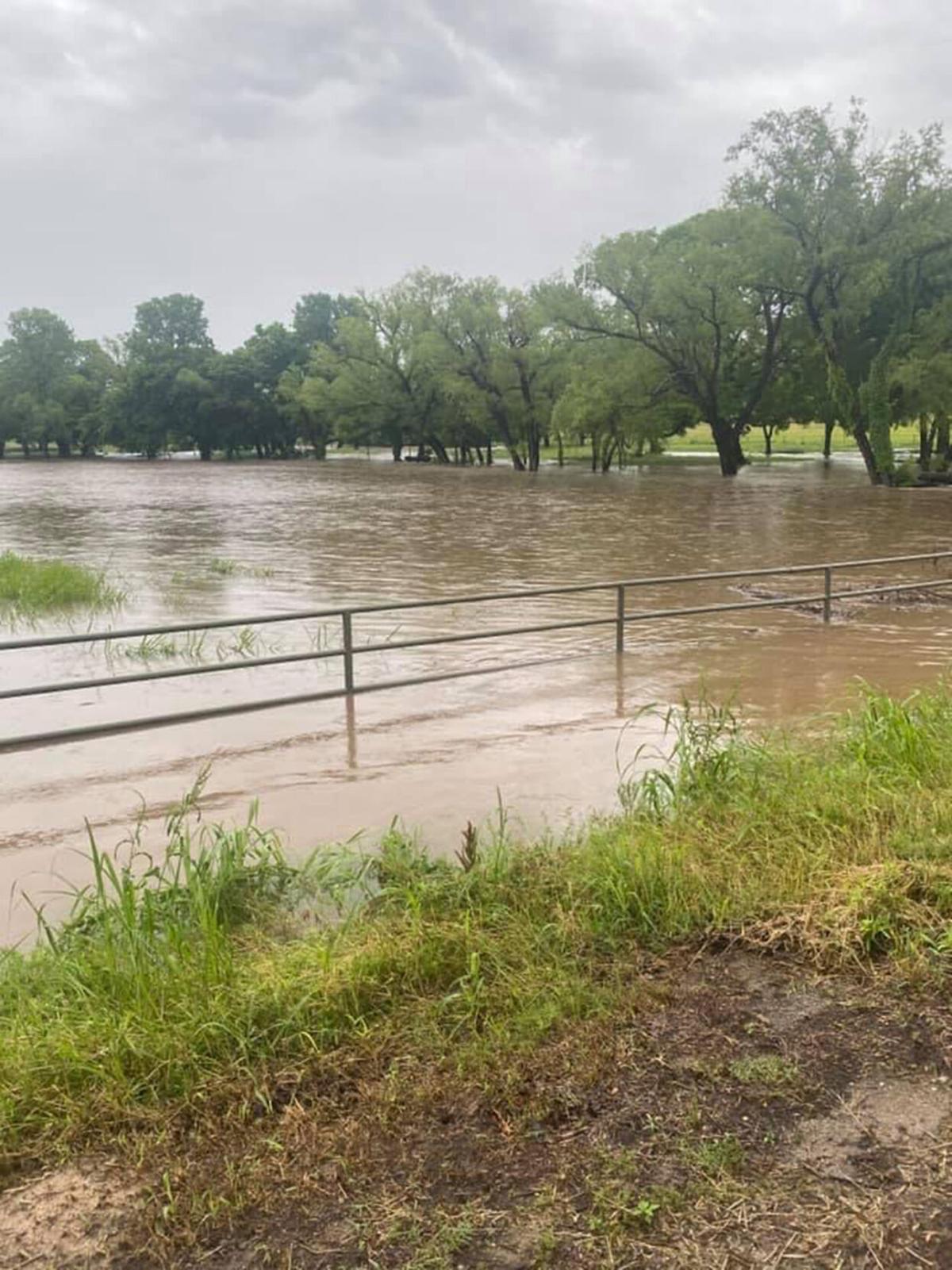 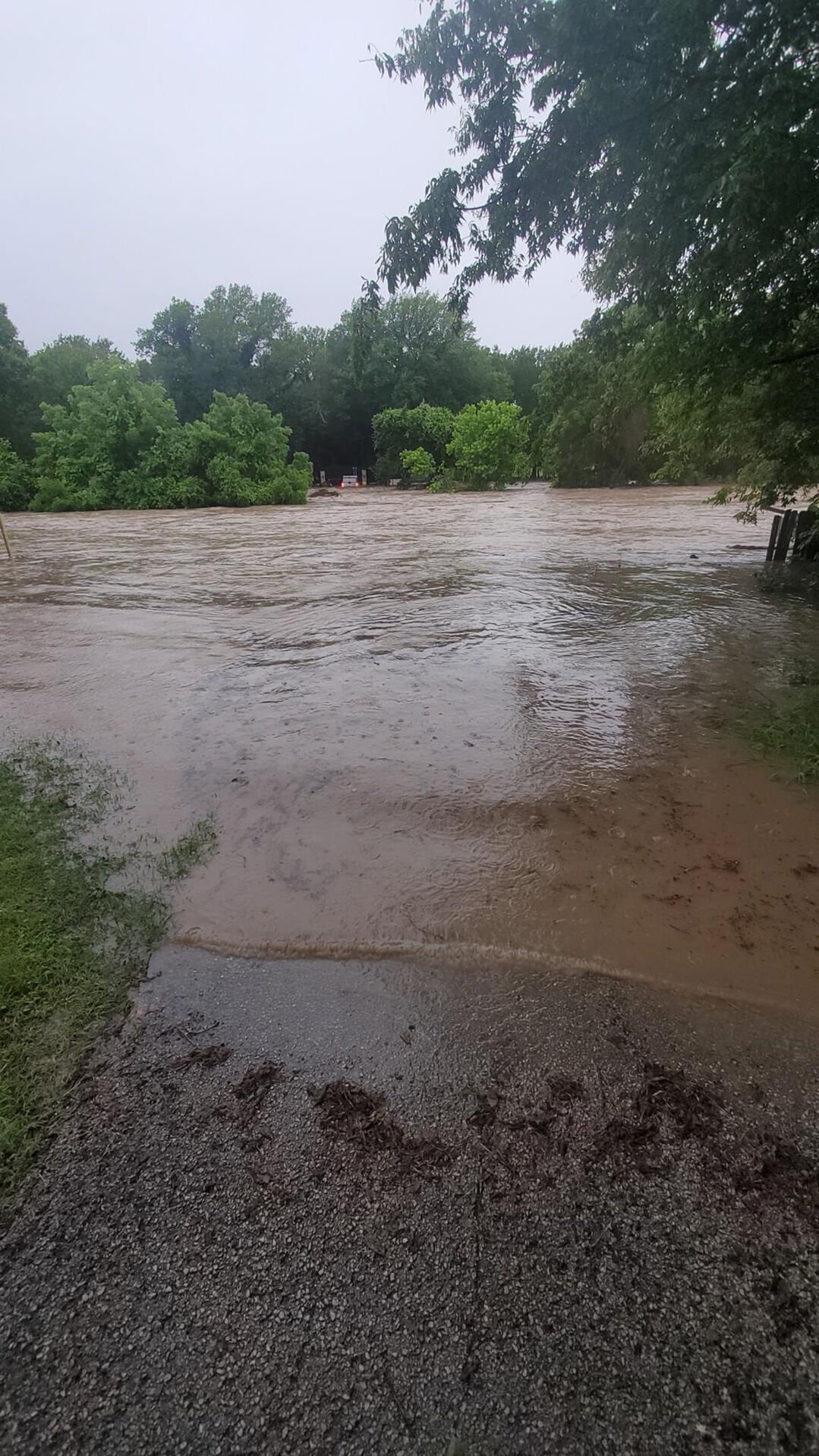 The Briar-Reno Fire Department assisted in two people trapped inside two separate residences due to the rising water levels of Ash Creek.

The bridge over a creek in the area of North Boundary Street and North Street washed out as a result of heavy rainfall Monday.

The Briar-Reno Fire Department assisted in two people trapped inside two separate residences due to the rising water levels of Ash Creek.

As rain continued to pour down across Parker County on Monday, several roadways became impassable, which resulted in a handful of stranded motorists.

“Most of the flooding has receded and we’re keeping an eye on rain the rest of the week,” Parker County Emergency Management Coordinator Sean Hughes said Tuesday. “The weather the rest of the week is supposed to be isolated, so isolated areas are going to get some and then we’re also monitoring the [Brazos River Authority] — we’re in constant contact with the BRA as far as their releases as well.”

The Brazos River Authority — which develops, manages and protects water resources of the Brazos River basin — opened one gate at Possum Kingdom Lake’s Morris Sheppard Dam at 7 p.m. Monday for a total release of about 8,800 cubic feet per second. The BRA issued a press release about the gate opening, adding that river levels would rise quickly.

In Weatherford, Director of Public Safety and Police Chief Lance Arnold said between police, fire and public works, they responded to about 50 weather-related calls from 4-9 p.m. on Monday.

“Most calls were related to localized flooding in the central and north parts of town. The water in those areas dissipated quickly,” he said. “We also responded to a few major weather-related accidents on Interstate 20.”

Video surfaced on Facebook of South Main Street that showed waves of stormwater rushing down the roadway as well as Palo Pinto Street.

In addition, Arnold said the bridge over a creek in the area of North Boundary Street and North Street washed out.

“West Lake Drive near the marina is a low-lying area and does flood during significant rainfall events,” he said. “Like most areas in town, the water usually dissipates quickly.”

“In our cases, it wasn’t what we would call a ‘swift water rescue’ as it wasn’t that they were going to be taken down stream so much as the vehicles became disabled and were stranded,” ESD 1 Chief Stephen Watson said. “At some areas there has certainly been a risk of that but thankfully no one has tried crossing any of those areas so far.”

The Briar-Reno Fire Department assisted in two people trapped inside two separate residences due to the rising water levels of Ash Creek, according to the department’s Facebook page.

Precinct 4 Commissioner Steve Dugan said there are two low-water crossings at Bear Creek that became impassable and were closed off along with a portion of Old Annetta that was barricaded. Both were open as of Tuesday afternoon. He added that a portion of Center Point Road also had water over the road and was closed off.

“We also had a lot of trees and debris up against the [Center Point] bridge and we were able to get there and clean some of the debris out to let the water go through,” Dugan said. “At White Settlement Road we had multiple locations that are low-water crossings as well as Cattlebaron Road. At Kelly Road we had a location there that was closed off until just before noon [Tuesday].”

There were also places where the water sloughed edges of the roadway off, Dugan said.

“I think everything we’ve got right at the moment is at least open,” he said. “But we still have quite a bit of debris that we’re cleaning off the roads and culverts that are stopped up from logs that washed down in them.”

“Water actually got under the road and ripped the pavement up, but we’ve already got it fixed,” he said. “We have a lot of ditch damage where the water washed out the ditches on the sides of the roads. We have probably 100 miles worth of ditches that the edges were washed out, so we have a lot of work to do for a few months.”

According to a press release issued by AccuWeather on Tuesday, meteorologists say there are early but troubling signs that a tropical system could brew and add to the flooding problems in the coming weeks.

“The initial flooding concern will be the result of a storm in the middle levels of the atmosphere that is forecast to form over Texas later this week and crawl eastward through next week,” said Senior Meteorologist Brett Anderson.