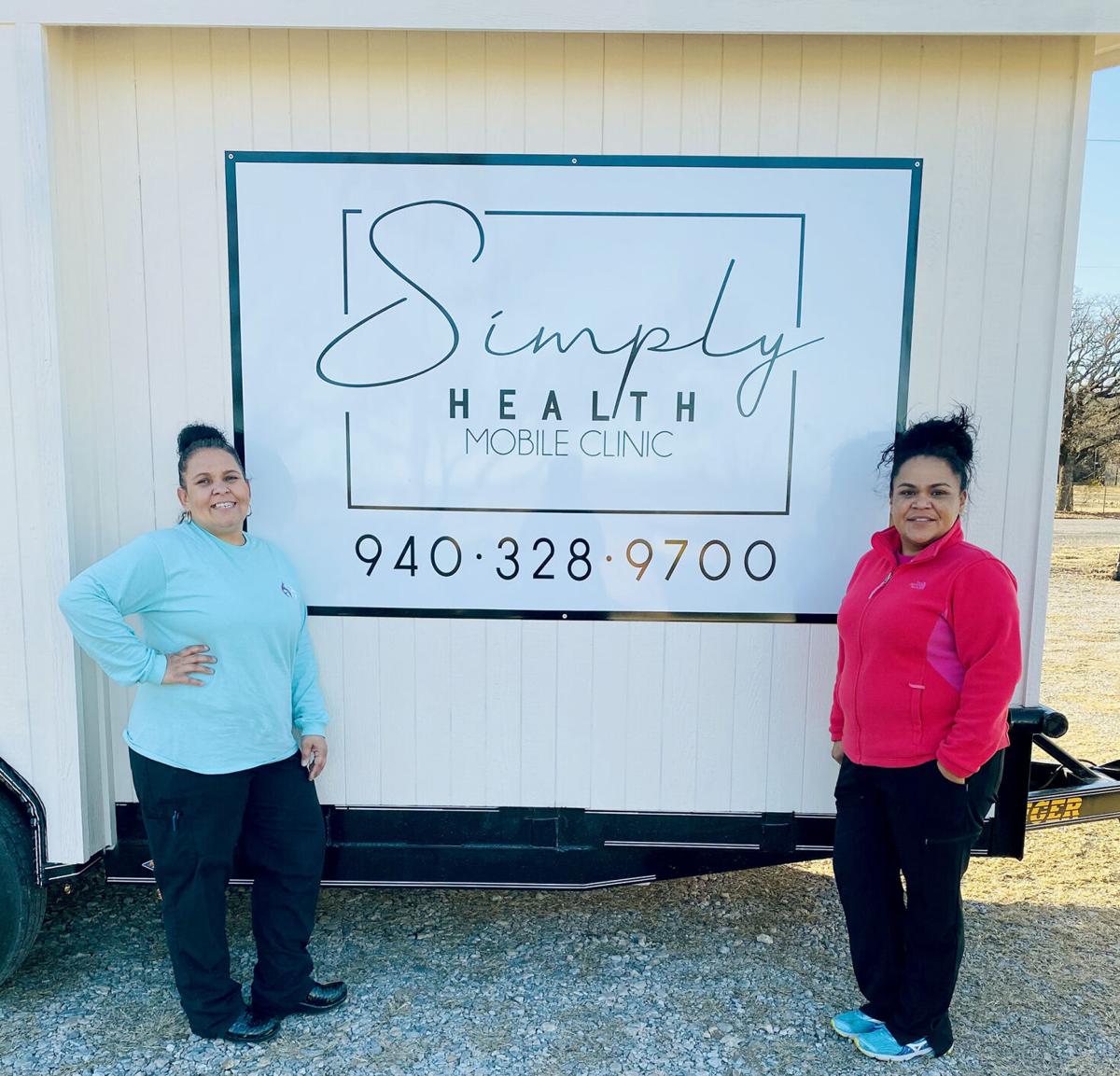 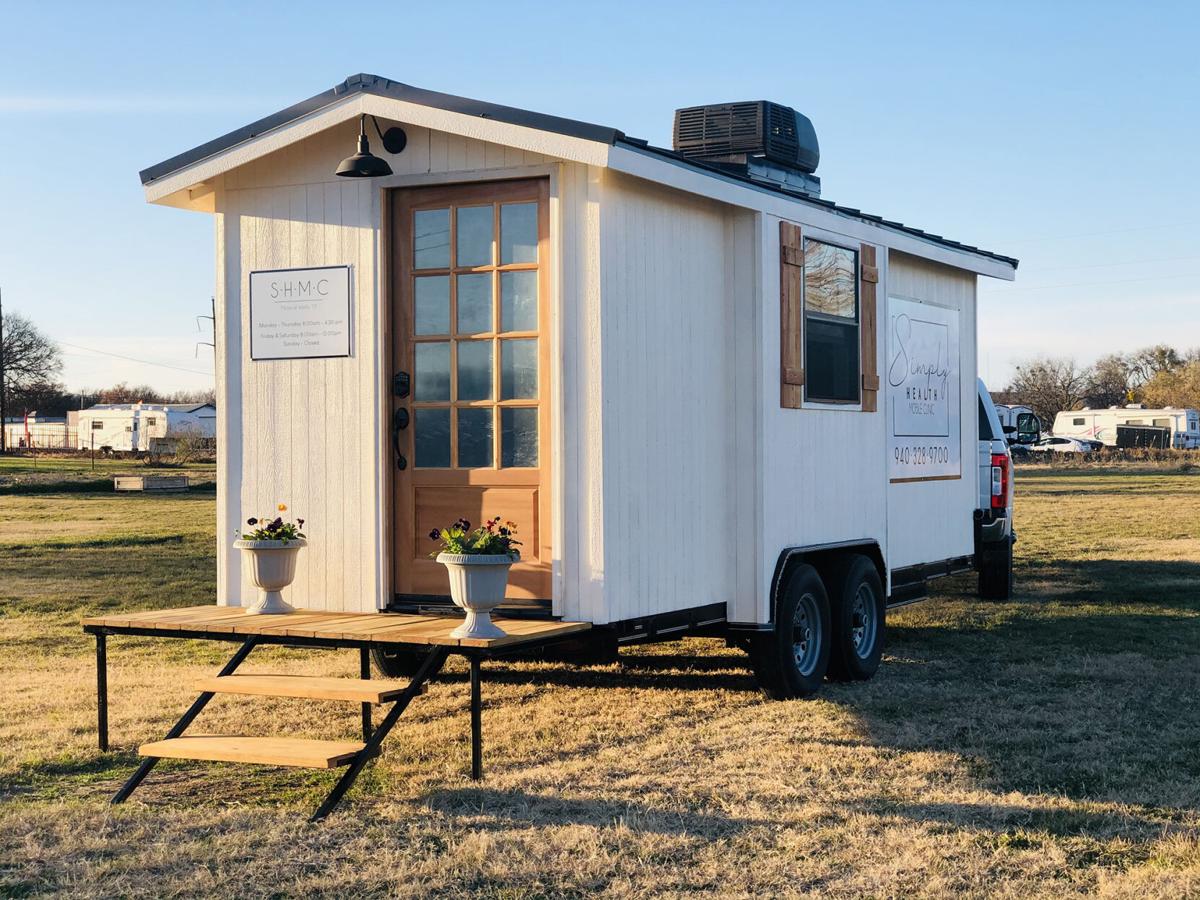 The mobile clinic, which is housed inside a two-room tiny house, opened in June.

The mobile clinic, which is housed inside a two-room tiny house, opened in June.

Combining their years of medical experience, Mineral Wells sisters Maria Cantu and Gaby Ruiz have teamed up to open Simply Health Mobile Clinic that offers a variety of services, including COVID-19 testing.

Cantu was a nurse at Palo Pinto General Hospital for 17 years before becoming a nurse practitioner in an urgent care clinic in Mineral Wells. She said she first noticed people getting sick without testing positive for either flu strain in November of 2019.

“We were seeing a ton of flu A and B all the way up to December, but we were testing a lot of people who weren’t testing positive for the flu of either sort but they were sick as could be,” Cantu said. “Around the end of December [2019], the first part of January [2020], is when corona just really started picking up in Washington and it was just like fire after that.”

Cantu said in January of 2020 a couple of Mineral Wells schools shut down.

“I was just like, ‘Something is happening and it’s not just the flu.’ Then comes March and corona is everywhere and we were trying to mitigate and slow things down because the hospitals were going to get overwhelmed,” she said. “We were seeing 60 to 70 patients [at the urgent care] and when they put in the COVID restrictions, we literally were dead silent. We weren’t seeing anybody because they weren’t allowing anybody in that had symptoms.”

Cantu didn’t want to just sit around, so last April she traveled to New York to help.

“New York was getting hit hard, they were having a ton of people with the virus and lots of people dying, so I decided I wanted to go be a nurse in New York,” she said. “I stayed there a month and I’m going to tell you, New York, they literally shut New York City down.”

When she returned, Cantu said she didn’t want to return to the clinic where she was unable to see anyone and that’s when she started having conversations with her sister about a mobile clinic.

Ruiz worked for Palo Pinto General Hospital for a little more than 10 years where she was a staff nurse, an obstetrics (OB) nurse and a nursing supervisor over the PPGH clinic. In March of 2015, Ruiz began working in OB at Medical City Weatherford where she gained even more experience.

“I kind of know the business aspect and procedures and processes, so that gave me a lot of experience for the future,” Ruiz said. “Around here, there’s a lot of pathology, a lot of disease, so we’re able to see the disease processes, we’re able to see what low income can do to patients when they don’t have resources, so as nurses and physicians it makes you think.”

In June, the two — who were both born and raised in Mineral Wells — had a two-room tiny house mobile clinic, which they have since named Simply Health Mobile Clinic.

“We decided this was going to be our baby, if we’re going to work for someone why not work for ourselves,” Ruiz said. “We have the knowledge, we have the capacity, we have the ability and bring something different to the community because we’re also bilingual and we have a Hispanic following and so that helps us with the diversity.”

“[The PCR] is one that the government and insurance and all your healthcare providers are going to say is the ‘golden standard.’ That’s the one that takes several days to get back, but it’s supposed to be the most accurate and that one we do here,” Cantu said. “The rapid is still accurate, however, if you ask an insurance company or government, it’s antigen specific for COVID but insurances don’t cover it per se because it’s not considered the golden standard.”

Cantu said they’re offering the rapid test for $105 and just a $15 collection fee on the PCR test.

“I’m not sure what other people are charging — I know some private facilities are taking advantage of insurance companies paying for tests — and I’m hearing anything from $200 to $6,000 is what they’re filing on their insurance, it’s crazy. We charge $105 for our rapid test,” she said. “The one that we send to the insurance, that’s filed on their insurance, we don’t charge anything. We do a collection fee of $15, but we use a lab that takes about 24 to 48 hours to get results back.”

While COVID-19 testing has been the focus, Simply Health Mobile Clinic offers a wide variety of services.

“We’ll do anything from ingrown toenails to sutures and sick visits,” Cantu said. “We’re just trying to be reachable and the name Simply Health really means something simple. We don’t have to be fighting with insurances — medicine is not that hard unless you make it hard. If you can be accessible and you can make it simple, why not, and that’s really where the name was derived from.”

Ruiz added that they also will draw labs and use major lab companies.

“It’s always been our goal to be at the level of the patient so they understand completely what’s going on with them, what they need and what are the goals to get them better,” Ruiz said.

Cantu added that the most important thing to them is answering questions and giving people peace of mind.

“In healthcare, there are so many different aspects that people don’t understand and then you compound that with a pandemic and it is just chaos,” she said. “When someone gives you a test, gives you peace of mind and can sit and answer your questions, tell you what’s going on, what medications are there, that right there is the most important thing. People just want answers and we will take the time to answer their questions.”

Simply Health Mobile Clinic is open from 8 a.m. to 4:30 p.m. Monday through Thursday, 8 a.m. to 12 p.m. Friday and Saturday and closed on Sundays. The clinic has been posted up in the Diamond Pharmacy/Metro Discount Foods parking lot just outside of downtown Mineral Wells off U.S. 180.