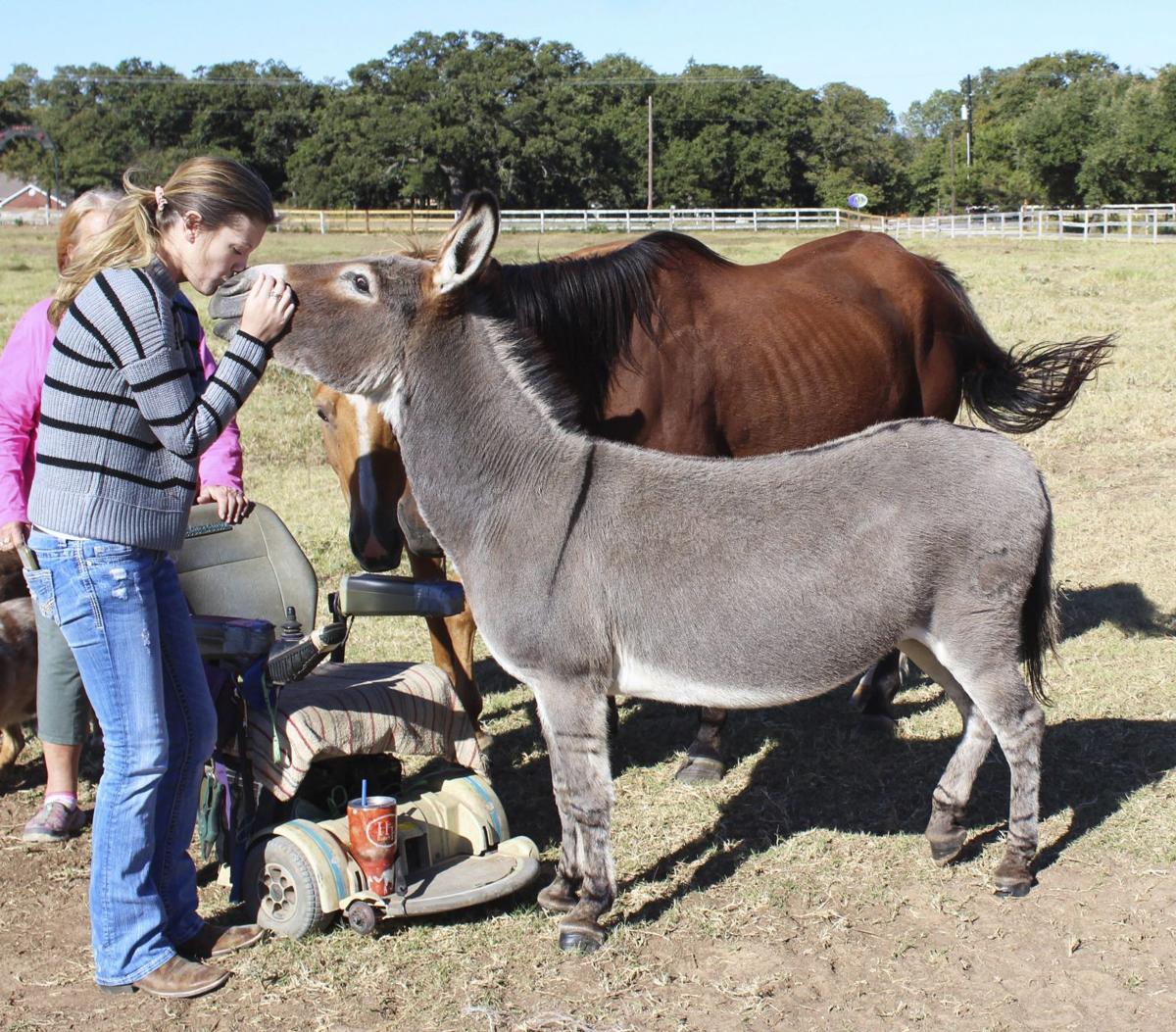 Khris Jones, vice president of Hokey Pokey Ranch, with one of their rescues, Auggie the donkey. 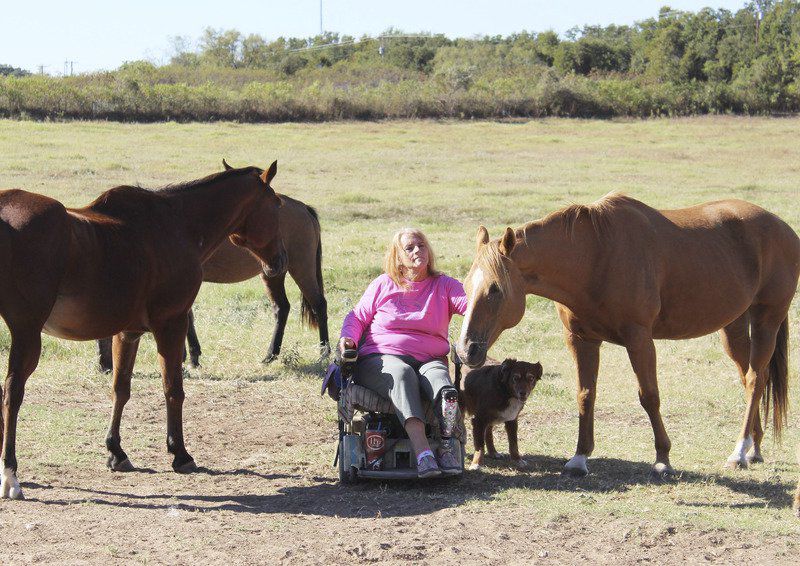 Rikki Jones, founder of Hokey Pokey Ranch, with some of the horses she has rescued through the non-profit organization.

Khris Jones, vice president of Hokey Pokey Ranch, with one of their rescues, Auggie the donkey.

Rikki Jones, founder of Hokey Pokey Ranch, with some of the horses she has rescued through the non-profit organization.

Mother and daughter, Rikki and Khris Jones, have shared a passion for animals and have now dedicated their lives to saving donkeys and horses since establishing their non-profit Hokey Pokey Ranch about four years ago.

“I lost my leg 12 years ago and I didn’t know what do to with myself because I drove an 18-wheeler all my life and what started it was when I went to a garage sale and come home with two stallions,” Rikki said. “I started looking into becoming a non-profit and filed in 2015.”

The Hokey Pokey Ranch was born and the two currently have five donkeys, two mules and several horses on 28 acres off Farm-to-Market Road 920 in Poolville.

“I don’t bring in a lot at a time, it’s just one or two here and there and I will keep those until a home finds them. I don’t advertise because then you have to go with all the questions — if you want to look at the horse, come out here and look at it. I wait until someone contacts us looking for something and then I either try to find it or see if we have it. That way, you know the person is serious about really wanting them and everything that comes with it,” Rikki said. “Horses helped form America, but they’re just being sent to slaughter now because people are over-breeding, backyard breeding, and then saying, ‘Oh this isn’t what I wanted.’”

The name Hokey Pokey came from what most would think, the song.

“You put your right foot in and shake it all around, that’s what it’s all about, and that’s the only [leg] she has,” Khris said. “She just went with it. We just thought it was cute and HPR just rolls off the tongue.”

The two try to intercept donkeys and horses before they get to kill buyers, which are people who sell them to be killed for their meat.

“We try to intercept a lot of our horses, donkeys or mules from owner surrenders and sales before they can get in the kill buyers’ hands because it’s always disheartening to hand somebody that buys horses to kill money. It kind of makes you sick to your stomach,” Khris said. “In the past, we’ve definitely pulled from kill pins — sometimes there’s just that horse that matters — and 170,000 are killed a year.”

Khris and Rikki said the hardest parts are having to tell someone no and losing an animal.

“We do lose some. We try to give them the best care we can, but sometimes it’s too late,” Khris said. “But at least they didn’t die a horrible death and in the end, we did what we could for them. It’s heart-wrenching.”

Rikki added, “Another hard part is having to tell somebody no. It’s really hard because you don’t know if you’re sentencing that equine to death or what these people will do then.”

But Khris and Rikki said they enjoy what they do and love the bond that comes with a rescue.

“The bond you get from a rescue is amazing because they know, you can’t tell me they don’t know,” Khris said. “When you take them away, you can see their whole demeanor change — it’s their freedom ride — and that’s my favorite part.”

Rikki added, “Just like dogs, if you take an abused dog and give it love or a street dog and you adopt it, it appreciates what it has now because it remembers where it’s been and I believe that with horses too.”

The Hokey Pokey Ranch accepts donations and the two would eventually like to host events at the ranch to bring awareness to their cause.

“Eventually I would love to have an arena where we could have events and take our rescues out and show people the difference,” Khris said. “There’s a difference I believe, 100 percent, in a bond. We do some local parades right now and we ride our rescues.”

“I love what I’m doing, I love my life now. If I would have known taking this leg off would have enhanced my life this much, I would have said take it off sooner,” Rikki said. “It’s the best mother and daughter venture and I’m very blessed.”

For more information about the Hokey Pokey Ranch, or to donate to the cause, visit their Facebook page.

Darrell Donohue, 77, of Weatherford, passed away January 16, 2020. Cremation services are under the care of Galbreaith Pickard Funeral Chapel. Darrell was born in West, TX to Glenn and Flossie Donohue. Darrell graduated from West High School in 1960. He was employed at General Motors for 38 …