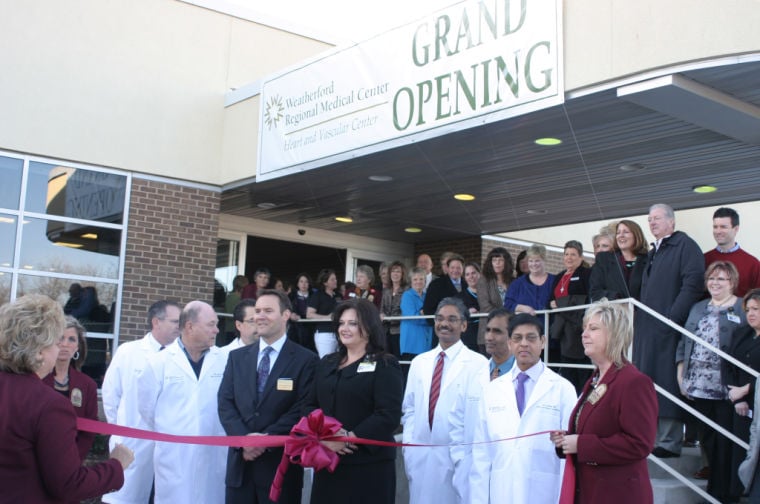 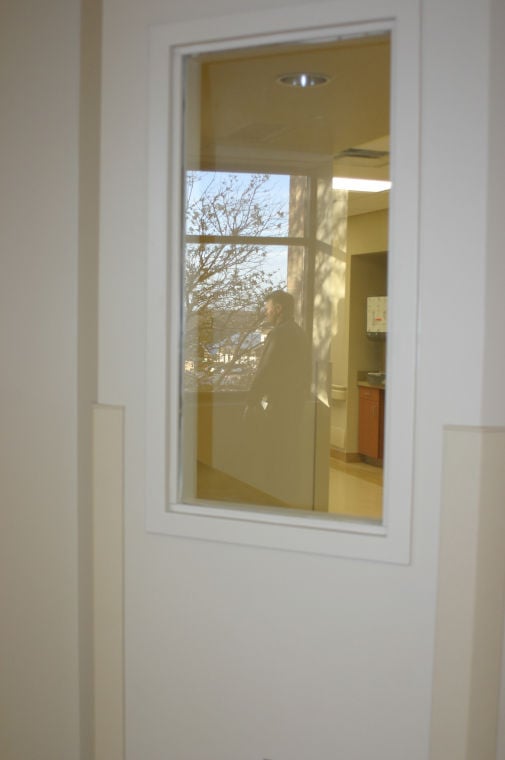 MARGARITA VENEGAS/DEMOCRAT PHOTO WRMC Director of Plant Operations Rick Leonard is seen reflected in the window of one of the cardiac critical care rooms. The third floor rooms, which look out over the city, will be completed in March.

MARGARITA VENEGAS/DEMOCRAT PHOTO WRMC Director of Plant Operations Rick Leonard is seen reflected in the window of one of the cardiac critical care rooms. The third floor rooms, which look out over the city, will be completed in March.

“It’s one of the greatest views of the city,” he said quietly.

The critical care rooms, along with medical and surgical rooms, in the new addition that has been rising up since construction started at the hospital last year will be ready in March.

On Thursday, guests received a preview tour of the addition after they huddled together in the chilly wind to celebrate the opening of the hospital’s heart and vascular center with a ribbon cutting.

The center, which includes six staff members, state of the art equipment and plenty of space, is ready for operation.

What this means for residents of Parker County is expanded services that can help when the need is critical, several WRMC staff members said.

“When you’re dealing with chest pain, the drive to Fort Worth is an eternity,” said WRMC CEO Cory Countryman. “Now, there’s a hospital close by where you can receive care.”

The center will offer diagnostic services for people who have issues with their heart, as well as vacular issues, which may come about because of diabetes, restless leg syndrome and similar types of problems, said WRMC Director of Cath Lab Michelle Reeves.

“This is a huge benefit for our county,” said Reeves.

The emergency room is working on getting a chest pain accreditation, which will help the cath lab expand services down the road, she added.

For now, there are six beds open for prep and recovery from procedures, workspace for doctors, lockers and private dressing areas for patients and more. A second cath lab will be opened at a later date.

One of the crowning jewels of the current cath lab is the GE 3100 Innova imaging system. The system allows for a broader picture image so, for example, a renal image can include both kidneys and moves in various positions to get images from all angles, said interventional product specialist Paul Temple. It also has a communication unit that allows those in the cath lab to communicate information to the doctors outside, who can then have a better understanding of the problem and pass along information to family members faster, he said.

“As a board member, I am very proud of what we’re going to offer for health care in Parker County,” said Bob Glenn, a Weatherford native who sits on the WRMC board, as he toured the facilities. “We’ve come a long way in the last few years.”

When the third floor expansion opens, it will include 52 beds and eight critical care beds. The beds are all in private rooms and have a lot of space — about 300 square feet each, said Leonard. The critical care rooms include windows facing nurses pods along the walls. Behind the nurses pods is a larger nursing station. The 52 medical/surgery beds are supported with both a large nursing station and a smaller one.

“People who live west of Fort Worth now have a hospital that can serve all their needs,” Countryman said.