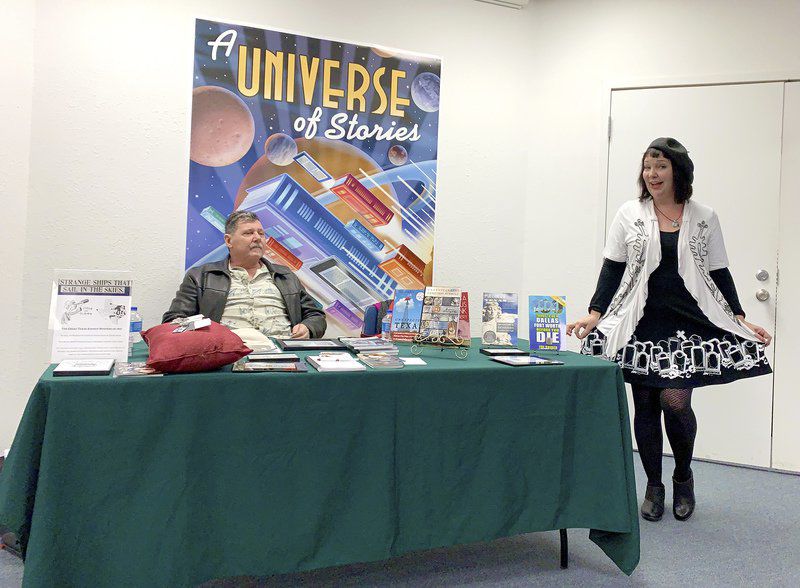 Tui Snider, right, and her husband, Larry, at the Weatherford Public Library. Her book “Understanding Cemetery Sybmols” is available to purchase on Amazon. 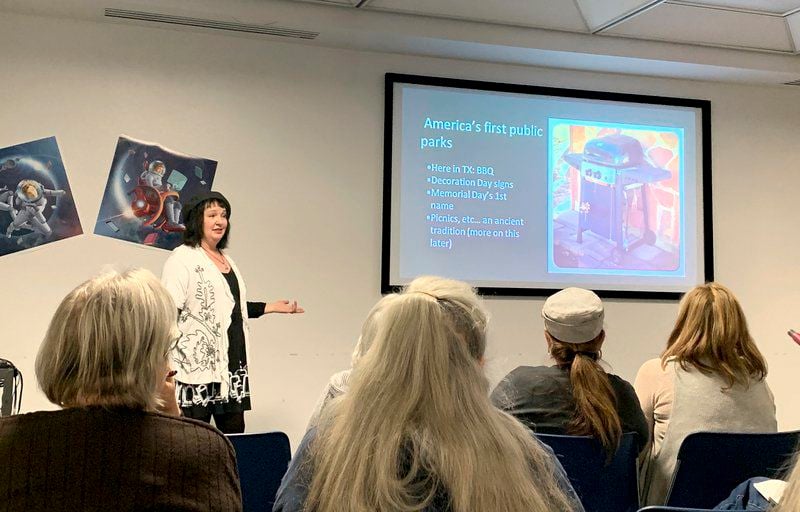 Tui Snider, author and speaker, gave a presentation on cemetery symbols at the Weatherford Public Library based on her book, “Understanding Cemetery Symbols.”

Tui Snider, right, and her husband, Larry, at the Weatherford Public Library. Her book “Understanding Cemetery Sybmols” is available to purchase on Amazon.

Tui Snider, author and speaker, gave a presentation on cemetery symbols at the Weatherford Public Library based on her book, “Understanding Cemetery Symbols.”

Author and speaker Tui Snider, of Azle, has spent some time researching the evolution of cemetery practices and symbolism, and recently gave a presentation at the Weatherford Public Library to share her knowledge with residents.

“Library staff constantly listens to our community and asks for input when we consider the types of events we will host,” Weatherford Public Library Services Director Chris Accardo said. “The presenter was knowledgeable and engaging, and from right here in Parker County. It’s exciting to bring local experts to our citizens to share their knowledge.”

Snider has done a lot of research and presented her findings that have been published in her book, “Understanding Cemetery Symbols.”

“There are cemeteries in America that have achieved arboretum status and that’s not really unusual, so in this way, a historic cemetery is a living library. America’s first public parks actually were their garden cemeteries,” Snider said. “Very few people realize that cemeteries are for the living. Yes, that’s where we place our dead, but then we the living go there and the cemetery is there to serve us.”

Snider said a lot of cemetery vocabulary and practices derived from ancient Greece, the Victorian era and the Civil War.

“All roads lead to Greece because so many times when I’m trying to find the origin of some cemetery symbol or cemetery practice, I end up reading about ancient Greece again. So, you’re going to see a lot of Greek influence in the vocabulary that we use for cemeteries and you’re going to see it in the architecture and symbolism,” Snider said. “The word cemetery has ancient Greek origins and it comes from the ancient Greek word calimatrium, which means sleeping place.”

Snider said there is a difference between the words cemetery and graveyard and the usage of the word cemetery really became popular during the Victorian era.

“A graveyard is a burial ground that’s associated with a church, so you have a church and then some graves by it and they’re associated with that parish. A cemetery is land that’s been specifically set aside for burial and a lot of times it’s outside of town because cities encouraged them to be put in the countryside,” Snider said. “The word cemetery, it’s usage, really began in the Victorian era, which is about 1830-1901, and before that, you would not have used cemetery, you would have said burial ground, churchyard or graveyard.”

Snider said there is also a difference between the words coffin and casket, and at one time the word casket was offensive to people.

“The word casket originally meant a little box where you would put something precious and caskets — when they first came along — were a little controversial,” Snider said. “Some people were offended, including Nathaniel Hawthorne. He wrote a series of essays in which one of them said something scathing about caskets and he wasn’t alone. People thought that by using the word casket you were somehow forcing yourself from the idea of death, putting distance from it, and people were offended by that.”

During and after the Civil War, mass production of coffins and caskets and embalming began, Snider said.

“There was hardly a family or person living in America that wasn’t touched personally by the way and by death. Everyone was grieving to some level or another. Because of the Civil War, that was the first time we had mass-produced coffins and caskets — before that, you either went to the local furniture store or you made your own,” Snider said. “That’s also when we started embalming people because if you died in a battle somewhere and needed to be shipped home to your family, they needed to do that. The Civil War is very pivotal in a lot of our cemetery practices, our cemetery symbols, the way we think about death, the ritual surrounding it and the way we chose to comfort ourselves.”

Snider went over some of the more popular cemetery symbolism, which included columns, arches, flowers, plants and hands.

“When you see a column that’s cut in half or only a partial column, very rarely would that be from vandalism,” Snider said. “That’s actually symbolic of a life cut short.”

Snider said arches typically have a keystone that prevents the arch from falling and sometimes there will be a symbol in the keystone to represent the foundation of that person, like a heart to represent love.

“An arch stands for triumph over death and what I love about arches is that you can’t make it without having a keystone in the middle. If you don’t have that, your rocks are going to fall,” Snider said. “Sometimes there’s nothing in the keystone, but sometimes you’ll see a crown in there or maybe a heart and that’s one of those fun things I really like to look for.”

Some symbols can tell people the age that someone was when the passed away, including sheaths of wheat and flowers, but there are always variations with symbolism.

“A sheath of wheat means someone had lived to a ripe, old age, but if you just see a couple of pieces of wheat, it could mean that they’re from the Ukraine. The Ukraine considers itself the breadbasket of Europe, so there’s always variations and I want to say that just because it’s written in stone doesn’t mean it’s written in stone,” Snider said. “Flowers stand for the fragile beauty of life. Individual flowers and different flowers mean different things and roses quite often are related to women. You want to pay attention to what state the flower is in. If it’s just a bud, it’s probably going to be a youngster, if it’s slightly open, it might be someone that’s slightly older, and a full bloom usually means someone that’s more mature and older.”

As far as trees, Snider said a tall cypress tree is always a staple in a cemetery.

Snider said hands are a huge topic, saying a handshake engraved on a tombstone is always interesting to decipher.

“Hands pointing up usually mean going to heaven and hands pointing downward can mean sudden death, so maybe somebody that had an accident or a heart attack, something that wasn’t foreseen,” Snider said. “Handshakes are a blast and they don’t just mean one thing. When you look at a handshake symbol you want to see first if there are one or two people buried there and if it’s just one, a clue to that is one hand will usually be limp and the other is firm. The firm grip is either a relative or God or a fraternal brother, someone that cared about them and is welcoming them to heaven.”

Snider said an anchor symbol can stand for hope.

“Oddly enough anchors are more associated with hope as a Christian symbol rather than sailors and that is because it was a secret symbol for Christianity and it also stands for faith and a solid foundation,” Snider said.

“I learned a lot about different symbols and other things — historical burial grounds, the finger pointing up and down — and if you get lost looking for a cemetery, just look for a cypress tree and you’ll find it,” McCauley said. “When I would go to cemeteries, I would see a column that looked like it was broken off. It would make me feel sad that someone destroyed the top because you would see taller ones around. They made it that way because their life was cut short. I enjoyed myself.”

Snider said her book, “Understanding Cemetery Symbols,” which can be purchased on Amazon, covers more details about cemetery symbols, practices and vocabulary.

“After the presentation, we — Rachel Reeves, the librarian who planned this event, and I — were talking to one of the attendees and she asked if we would have more events like this one, as she was especially interested in family history and local history,” Accardo said. “We definitely will, and we already have some in mind.”