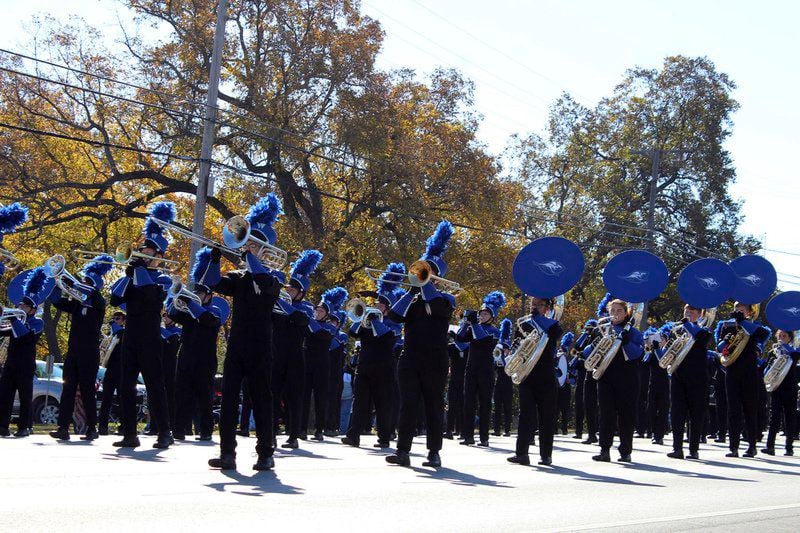 The Fightin’ Roo band has fought through the disappointment of having most of its events and performances canceled due to COVID-19. 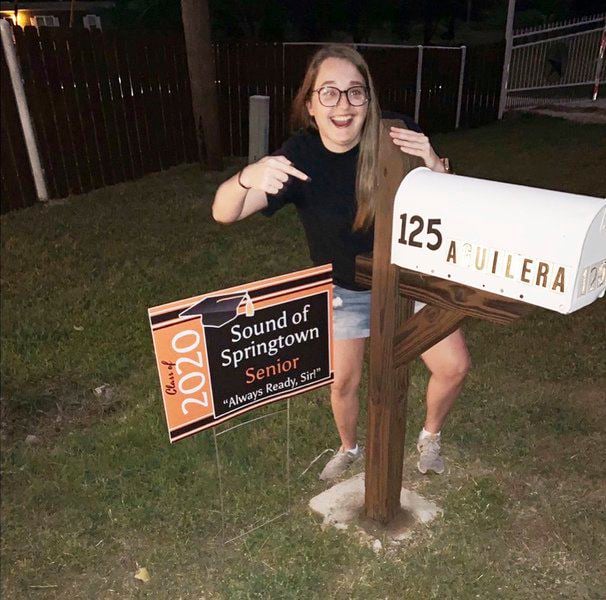 Rachel Garza, percussion director of the Springtown High School band, was one of several directors who placed yard signs at the homes of seniors earlier this month as a way of recognizing them from afar.

The Fightin’ Roo band has fought through the disappointment of having most of its events and performances canceled due to COVID-19.

Rachel Garza, percussion director of the Springtown High School band, was one of several directors who placed yard signs at the homes of seniors earlier this month as a way of recognizing them from afar.

Academic and athletic school programs have greatly been affected by COVID-19, and hundreds of those students making up the band programs from area schools are no different.

Springtown, Aledo and Weatherford band directors said the pandemic put a complete halt to various performances and competitions, some that were still ongoing when the COVID-19 restrictions hit.

“When we released for Spring Break, we were in the middle of UIL Concert and Sight-Reading preparations. We would have gone to contest on April 21 where I am confident all of our bands would have earned a Sweepstakes Award. In addition to Concert and Sight-Reading, our Winter Guard missed out on championships this year as they were cancelled due to the pandemic. The SHS Winter Guard has placed first three times, second once and third once in their five competitions leading up to championships and we ranked fifth in the class,” McLellan said. “We also had 30 students qualify for the UIL State Solo and Ensemble Contest, which has also been cancelled. Students are missing out on their spring concerts, jazz band festivals, Winter Guard championships and band banquet, which would be the last for the seniors.”

“Our annual auction and concert that was on April 11 was cancelled. Our spring concert that was to be on May 21 is cancelled and the Texas State Solo and Ensemble Contest at [University of Texas] Austin is cancelled for the state,” Buckner said. “Our annual band banquet and award ceremony was cancelled. The band typically performs at graduation and for the rodeo parade in June. While those events are still happening, our performances have to be cancelled because we can’t perform unless we can meet together and practice.”

Aledo High School Band Director Joey Paul said two of the school’s groups — the wind ensemble and varsity choir — were in the middle of competing in Indianapolis at the Music For All National Festival when the news hit.

“The event was canceled and we returned home without performing even though we practiced for months on a very challenging program,” Paul said. “It was disappointing, but our kids really rallied and they understood the situation and the importance of returning home to our families. Equally disappointing was our award-winning color guard and jazz bands were not able to participate in upcoming competitions the very next week.”

To adjust to social distancing challenges and other restrictions, the band directors said they have implemented new things, including virtual meetings, to continue engaging students.

“I have had several Zoom meetings each week. We were also in the middle of the student leadership audition process for next year’s band. I have spent several hours over the last few weeks offering online trainings for these students. They have been incredible with their participation and I have enjoyed seeing how so many of them have matured in their thoughts over the past year,” McLellan said. “We have created videos and offered Zoom meetings to teach the audition music for next year’s bands and I have offered a ‘Virtual Lunch’ every Wednesday for about an hour. This is basically an online hangout time where we can visit with the kids and they can visit with us and each other. I know it has helped me to have some sense of normalcy as many students like to sit in my office at lunch and visit while they eat. It is important in creating and maintaining the ‘band family’ as we like to call it.”

Buckner said he’s had students turn in videos of major scales for concert band placements and videos of themselves conducting to the upcoming marching show for drum major tryouts.

“I was able to complete arranging the marching band music for next year’s show during spring break in March. My hope was that the music would give our students something to look forward to if we ended up canceling performances, which we obviously did. We also had auditions for drum majors, section leaders and concert band placements for the fall that we needed to handle remotely,” Buckner said. “Our technology department has been great about making sure our students have access to laptops and internet hotspots so that all students have the technology they need.”

Aledo has continued with its private lesson program, just on a digital platform.

“Zoom, Webex and Facetime have allowed our kids to enjoy one on one lessons with professionals all over DFW. The process isn’t perfect, but it is important that all students think about their progress even in the face of adversity,” Paul said. “Directors have also hosted a variety of social platforms to bring students together and just talk. Most of the time we meet at lunch time and enjoy a sandwich and just connect in a different way.”

For his seniors, McLellan said all the band directors did something special for them and in place of the in-person ceremony, McLellan has arranged a virtual awards banquet.

“The band directors drove to their houses [May 7] and placed yard signs in front of their house. This was our way of recognizing them from afar,” McLellan said. “We will have a virtual awards ceremony on May 19 at 7 p.m. During this ceremony we will award our yearly awards that are usually presented at our band banquet. We will also have a slideshow of memories from the year and a senior tribute. Students will log into Zoom to view the ceremony and it will be recorded for those who can’t attend at that time.”

As for teaching, McLellan said he’s been able to teach some individual students remotely.

“It is not possible to teach a band this way due to varying internet speeds. I have worked one-on-one with students, which works fairly well although it is not near as effective as being there personally. We have also created video lessons and PowerPoints for students to use to learn the audition music,” McLellan said. “Fortunately, we have been in the habit of using Google Classroom for students to turn in their playing assignments and playing tests, so that has worked well with very few issues. My staff is very fluent in technology and I think we have all done an exceptional job of teaching and connecting with every student so that they can keep improving during this time. I have had students do performing projects for family members and many have used music to cope with this unprecedented time.”

Buckner said he has also been able to teach some students, but not all together as one band.

“We have been able to keep in touch with students and track their individual progress, and we’ve been able to share resources. But it’s not nearly the same as sitting in an ensemble and making music together. Nothing can take the place of that,” Buckner said. “But we do what we essentially always do — we set our sights on the future and our next performance. This just happens to be a little further down the road than normal with marching band in the fall.”

The band directors said each student has their school-issued instrument at home so they may continue their work, but McLellan had students turn in their instruments on May 11 for repairs and sanitation before summer hopefully begins.

Currently every band student in Aledo ISD has an instrument they can practice on at home.

“Whether they own an instrument or the school has provided one … progress and practice can happen on their own,” Paul said. “We are working on a plan to return concert instruments the last week of school.”

Buckner said he is allowing his students to keep their instruments through the summer.

“We had a day where we scheduled students in 10-minutes increments to do a curbside pickup of instruments and equipment for those who weren’t able to get it on the last day of school,” Buckner said. “I’ve also delivered a couple of instruments to students’ porches. We want our kids practicing daily to retain and improve their playing ability.”

The band directors said it has been a struggle to deal with the cancellations of performances and classes this spring.

“My motivation and my students’ motivation often comes from the next performance, so in that respect it’s been difficult. We do it for the music and we do it for the experience of making music together,” Buckner said. “At the same time, I’m thankful we have had measures in place to help keep everyone safe. I’m also thankful for band kids. They are smart and resilient. They have been tough and upbeat. In conversations with next year’s leaders, I know they are ready to get back together and excited about learning next year’s marching show. I am very much looking forward to hot August practices and seeing my students again.”

McLellan said as a parent of a senior in band as well as being a band director, it is heartbreaking.

“To realize that the events you look forward to for 13 years are cancelled, postponed or greatly changed by the pandemic ... It is just heart-breaking to not be able to celebrate those moments with your band students who you spend so much time with over four years. They are like my kids and I hate that they are missing these ‘once in a lifetime moments’ and we are missing celebrating them in a normal way,” McLellan said. “It has been very difficult. In addition to all the spring programs we do, we also have so much planning for the fall that takes place. This has had to be done virtually and has been more challenging. As a teacher, you do what you do because of the kids. When you are not with your kids, you feel a little lost and honestly sad. Teaching music is so much more than notes on a page. It is the connections we make and the emotions we share that make band directing such a rewarding profession.”

Paul said he was disappointed for members of the senior class who didn’t get a chance to showcase their talent.

“We have such dedicated students and parents that are so supportive. The end of the year we finish with Night at the Pops and we wrap up our year with an entertaining community event that showcases our varsity band, Jazz 1, choir and color guard,” Paul said. “This year’s show was going to be Disney Plus and we were going to feature the music of Disney both present and past. The kids love this time of year, but now we can’t share that experience.

“We are currently working on a virtual platform to present our band banquet. This event is an amazing experience where we share awards and honor our senior class. I miss our kids and I miss making music with some of the best kids on the planet.”