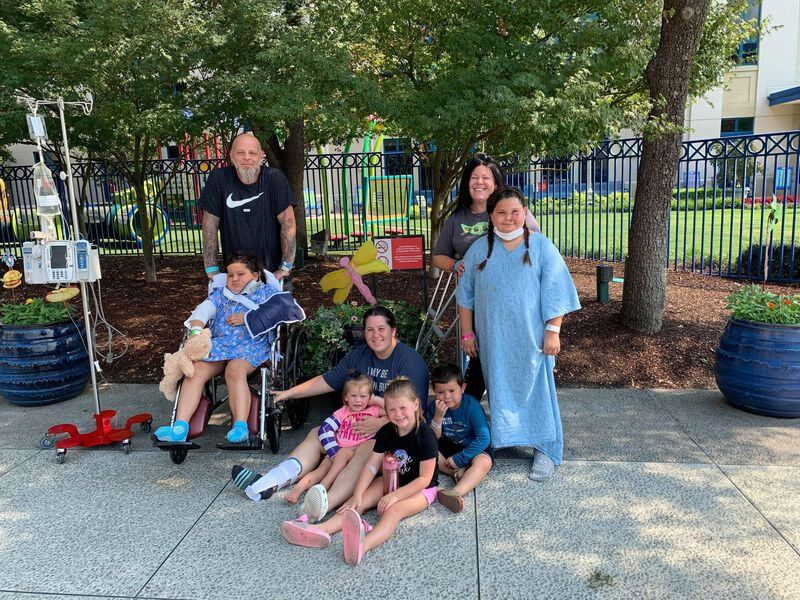 Brent and Zabrena Van Schuyver with one of their daughters and some of their grandchildren. 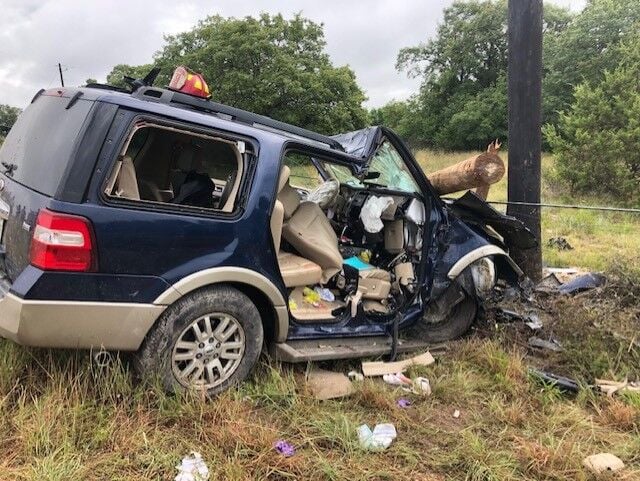 Brent and Zabrena Van Schuyver with one of their daughters and some of their grandchildren.

“My whole family was in that one vehicle, and it could have been way worse,” she said. “I’m just grateful they’re all still alive.”

Emergency services responded to the collision on Farm-to-Market Road 51 near Veal Station around 10 a.m. after a Ford Expedition, driven by Van Schuyver’s younger daughter, hydroplaned and left the roadway, striking a utility pole.

Van Schuyver’s seven grandchildren, ranging from 11 years old to 1, were also in the vehicle and transported to area hospitals. One sustained injuries requiring surgery to their arm, another had a fractured hip and was released, a 1- and 2-year-old were released with no major injuries, an 11-year-old was released after a day but sustained a back injury, a 5-year-old was kept overnight for observation and released the next day and a 10-year-old suffered a fractured clavicle, torn ligaments in the neck and required surgery on her jaw, Van Schuyver said.

Her oldest daughter, who was riding in the passenger seat, took the blunt portion of impact, suffering several breaks and two collapsed lungs.

She underwent surgery on Thursday to put plates and metal ribs on her right side, where she suffered 10 broken ribs, and is alert and responsive, though still in a lot of pain, Van Schuyver said.

“Her left arm still has no movement, so she’s going to have another MRI. They said there’s a possibility she might have had a stroke,” she said. “Her left eye kind of goes a little funny and her smile isn’t the same anymore — it’s a little droopy, and she’s forgetting a lot.”

After news of the wreck circulated, the Van Schuyver family said they’ve seen an outpouring of support from community members — from items being dropped off at their house to strangers letting them borrow a trailer. Great Clips in Azle offered to bring the family in for free haircuts.

“One lady called us and said she had no money to donate, nothing other than herself, and offered to babysit if we needed to run errands or something,” Van Schuyver said. “Everyone has been so wonderful.”

But with a long road of recovery ahead, particularly for their oldest daughter, the Van Schuyvers say they are still in need of help until she can get back on her feet.

The family has set up a GoFundMe for monetary donations, but it also looking at children’s shoes and a family-friendly vehicle to tote all the kids around after the Explorer was totalled.

“We’ve never asked for help, but sometimes you have to humble yourself and put your pride to the side,” Zabrena Van Schuyver said. “We don’t even know when [my daughter] is coming home, and in the meantime, I’ve got [her] five kids that I need to haul around to all their doctor’s appointments and still figure out how to work.”

Though they still have some things to figure out, the Van Schuyvers are using the opportunity as a learning experience.

“They made a mistake and thank God it wasn’t a fatal mistake,” Brent Van Schuyver said. “We want both of our daughters to go through child safety classes and get educated on driving safety.”

The couple also remains grateful for the first responders who arrived at the scene of the accident, particularly a DPS Trooper R. Lituin.

“He was amazing, very calm,” Zabrena Van Schuyver said, “and I wanted to personally thank him.”

Brent Van Schuyver said Lituin went above and beyond, visiting them in the hospital and calling the family back to back days after the accident to check on them.