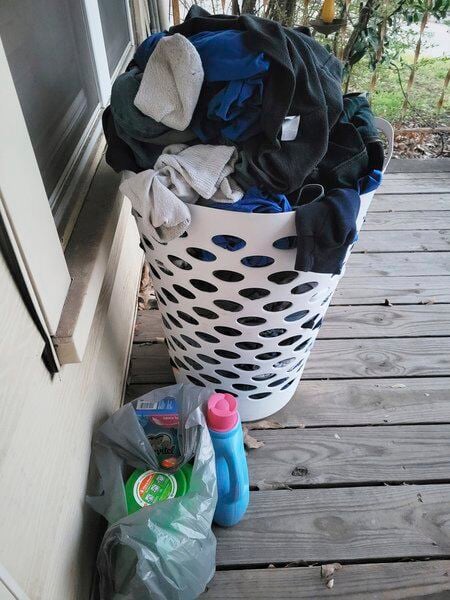 A mysterious basket full of men’s unwashed clothing, along with a sack of laundry detergent, fabric softener and dryer sheets, was left on the front porch of a Weatherford home Friday. 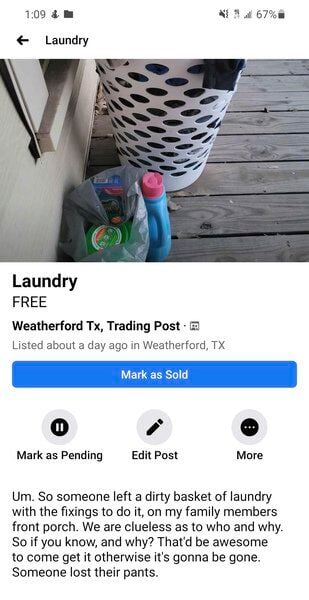 A mysterious basket full of men’s unwashed clothing, along with a sack of laundry detergent, fabric softener and dryer sheets, was left on the front porch of a Weatherford home Friday.

After a three-day search to find the owner of a mysterious basket of dirty laundry left on a Weatherford resident’s porch, the man has been identified.

Cybill Moore, who shares a property off Harcourt Street in Weatherford with her great aunt, said she was shocked following Friday night’s discovery on her great aunt’s front porch.

“She called me Friday and asked me if I knew anything about some laundry left in front of her door,” Moore said. “I said, ‘No, I don’t but I’ll check it out when I get home.’”

On the porch, Moore discovered the full laundry basket of what she describes as a younger man’s work clothes, including jeans, socks and sweatshirts. A Walmart bag containing soap, fabric softener and dryer sheets was also sitting next to the basket.

“I decided to just leave it there to see if anyone was going to come and get it, so it sat there for about 24 hours and was still there,” Moore said.

In an attempt to locate the owner, Moore posted the information on several community pages on Facebook. The posts went viral — in a humorous way — but Moore was unable to make contact with the owner until Monday afternoon.

"The gentleman has been found," Moore told the Weatherford Democrat in an update Monday evening. "He said they were supposed to be dropped off to be done a few houses down.

"The woman who normally does his laundry had called him and asked him where it was."

Moore washed and folded the laundry prior to the owner being notified.

“A lot of people have joked about dropping off their clothes for me, since I’m doing ‘community laundry,’” Moore said.