Early voting for the Nov. 3 election begins Tuesday and amongst other local elections includes the race for Parker County sheriff.

Hess said he’s bringing honesty and accountability to the table.

“The current sheriff is not being honest letting the public know about his health and I’m not trying to be rude or inappropriate or anything but I think the voters ought to know the health and well-being of the sheriff that hasn’t actually been in the office since March, letting somebody else run the show,” Hess said. “It comes right out of the sheriff’s office, they’re keeping it a secret. He’s got cancer and a lot of people know it. We even had some of his family members told us personally they couldn’t believe he even signed up to run again. I just think that’s fraudulent to the taxpayers. They ought to let the voters know and a lot of people do know, but they’re keeping it very, very secret.”

“I’ve been through a lot — I’ve had a double lung transplant — and it’s cancer-related and right now we’ve got it at bay,” Fowler said. “I’m not going to say that I work every day but I try to take care of business every day and of course it has slowed me down, which I’m not real fond of. I used to have two speeds, fast and stop, and I’ve got a little more stop now but I can still operate the sheriff’s office to the degree just like we’ve always done. That does not suffer. If it suffered, I wouldn’t do it. I wouldn’t try to fool the public into thinking something that’s not true.

“I will give a shout out to the University of Texas [Southwestern] transplant program in Dallas because I got two lungs instead of one and there’s a lot of hurt that goes along with that — it’s painful. Those people are very good at what they do over there. Having gone through it, I have a different slant on life now and life is very precious. Only diamonds are forever, that’s about it, and I don’t have any desire to last forever.”

Hess said a couple of the issues he’s passionate about and will tackle as sheriff are crimes against children and the focus of the sheriff’s office.

“Crimes against children is No. 1 and I just don’t think we ought to focus on speeding tickets when there’s bigger fish to fry. There’s 300 to 400 pedophiles living in Parker County that I don’t think are attended to like they should be,” Hess said. “We live in a police state and there are people that are going to be troublemakers that need to be punished and arrested, but I just think it’s been going overboard for years and that just needs to change. I think the investigation department for the sheriff’s office is inadequate because I’ve known people who have been investigated by them and there was hardly an investigation — very poorly done. There’s just a lot of problems up at the sheriff’s office that needs to be addressed on day one.”

Fowler said the issues he’s passionate about are upholding the drug laws and also combating crimes against children.

“Having worked where I’ve worked over 50 years, I know what lax law enforcement can do to a community. Drug law enforcement is one of my big passions and I think that we’re pretty tough on violation of drug laws,” Fowler said. “The thing I’m most passionate about is probably crime against children and we put a lot of money and a lot of training into the officers that work those cases because believe it or not, you can do a lot of harm if you get the wrong people, such as interviewing a small child the wrong way, and that’s why we so much appreciate the Children’s Advocacy Center. That’s probably the No. 1 and drugs would be right behind that.”

Hess wanted to address his drug policy following statements made in a previous Weatherford Democrat article.

“Some people have an issue with my drug policy and I guess I just need to let the voters know that it’s common sense. I think cannabis is medicine — there’s been absolutely zero deaths from cannabis — but as for methamphetamines, we all know that’s bad and it’s a no-brainer,” Hess said. “I will be going after the sellers selling it, but the user I think we ought to try to rehabilitate or help the user if they want to be helped. If they are a career drug abuser, then they ought to be dealt with. I’ve got little children and I wouldn’t want anyone selling drugs to my children, so we have to use some common sense here.”

Fowler said he enforces the law as written.

“Here’s the thing, Mr. Hess is on record that he will not enforce any drug laws, he will not make a drug arrest, he will not make an arrest for a gun violation, he’s on record as saying that and that’s a constitutional issue with me,” Fowler said. “I enforce the law as written, end of story. If you’re willing to go on the record and say you will not enforce the law that is constitutionally required, then you have no business being the sheriff. He even said something about growing marijuana at the sheriff’s office — give me a break. Anybody that thinks like that has no business being in law enforcement because you take an oath and you raise your right hand, so I don’t know what he’s going to do about that.”

Hess said he hopes people will get out and vote.

“I’m just looking forward to the election starting Tuesday and I hope people get out and vote, and we can bring some new blood to the table,” Hess said. “I’m bringing accountability and honesty and making sure people get their money’s worth — that is what I’m going to bring to the table.” 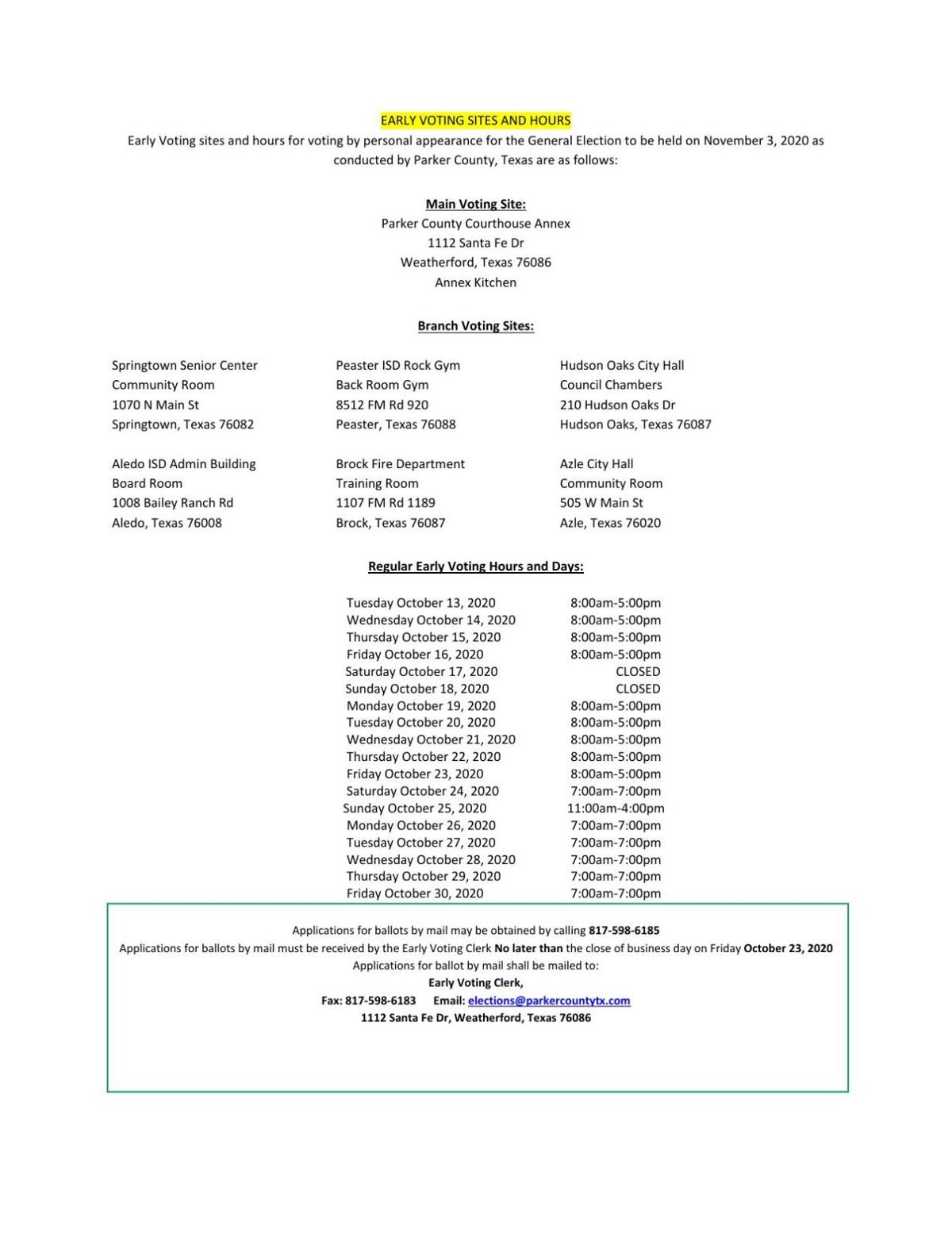 In Springtown, candidates Gary Veazey, Paul Gregory and Mark Bryant are running for school board Place 5.

Three individuals have filed for Place 1 on the Azle ISD board of trustees: Brenda Reed, Brian Pantoja and Jeri Geary.

Millsap ISD has three open board member spots available. Incumbents Morgan Williams and Allen Williams have filed for re-election, and are up against challengers Andrea Schrick, Bobbye Brogdon and write-in Chad Edwards.

Poolville ISD has a couple of contested races.

In the city of Aledo, Mayor Kit Marshall is running against challenger Shane Davis. 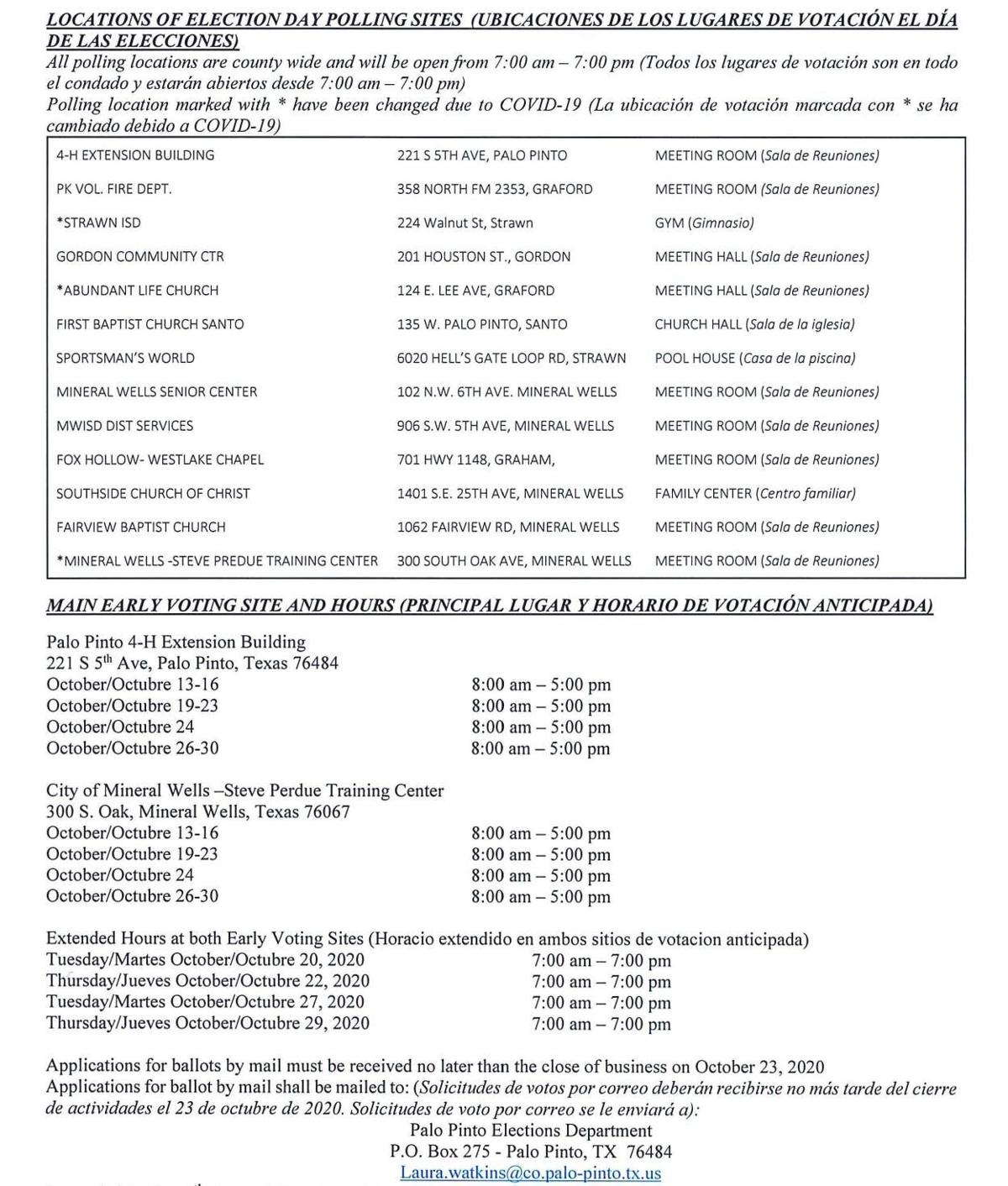