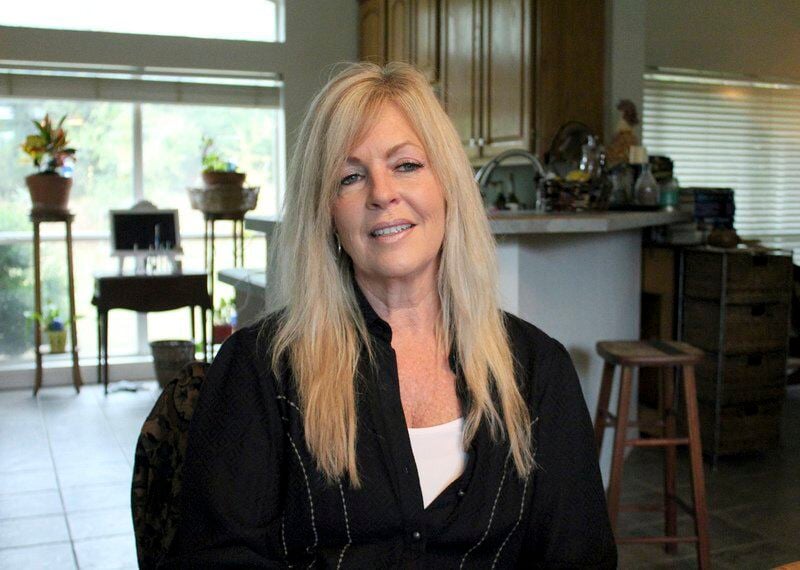 Weatherford resident Jeannine Kuhnell has quite an inspiring background from working in FBI counterintelligence to training explosive detection K-9s and developing cyber security. 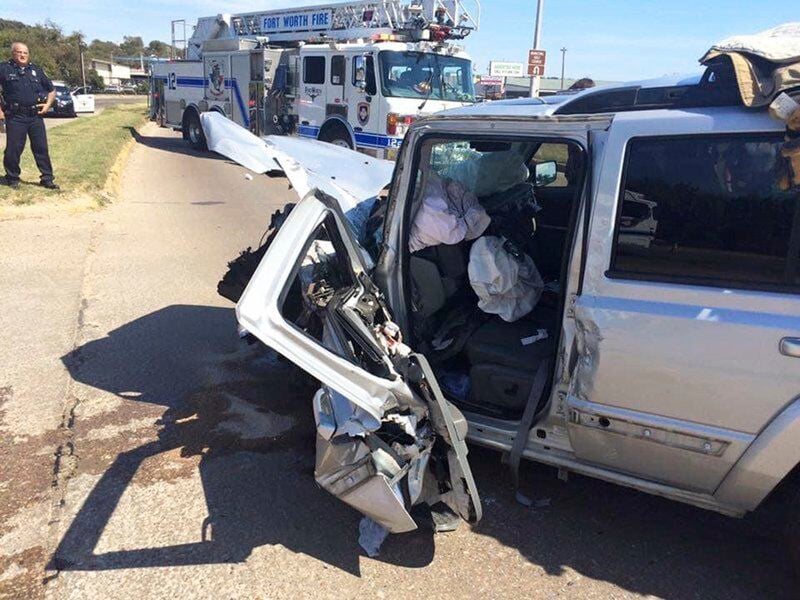 Jeannine Kuhnell’s vehicle was hit head-on in a deadly crash in Fort Worth. The driver of the other vehicle did not survive, and Kuhnell spent months in the hospital wheelchair-bound and rehabbing from the incident. 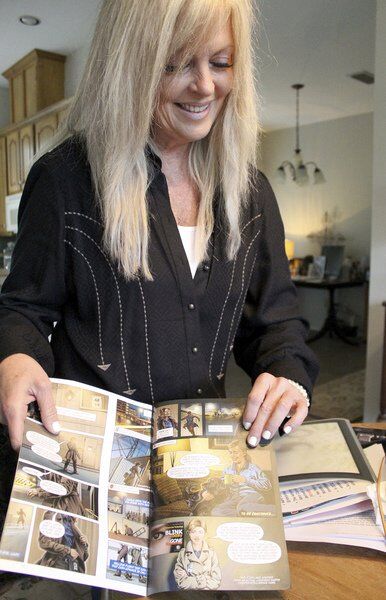 Jeannine Kuhnell with her first published graphic novel, “WINDE.” Kuhnell has written another book, “The Overcomers by J.L. McKay,” that is expected to be published by the end of this year.

Weatherford resident Jeannine Kuhnell has quite an inspiring background from working in FBI counterintelligence to training explosive detection K-9s and developing cyber security.

Jeannine Kuhnell’s vehicle was hit head-on in a deadly crash in Fort Worth. The driver of the other vehicle did not survive, and Kuhnell spent months in the hospital wheelchair-bound and rehabbing from the incident.

Jeannine Kuhnell with her first published graphic novel, “WINDE.” Kuhnell has written another book, “The Overcomers by J.L. McKay,” that is expected to be published by the end of this year.

Coining herself “The Texas Renaissance Woman,” Weatherford resident Jeannine Kuhnell has quite an inspiring background from working in FBI counterintelligence to training explosive detection K-9s and developing cyber security.

Born and raised in Houston, Kuhnell moved into a position as a TV news reporter for KTVT, Channel 11 — when she was Jeannine McKay — and trained explosive detection K9s before starting a career in the FBI in 2001.

“Back in the day people were very personable and we were very family-oriented at the FBI. We had what we called a ‘squad mentality,’ but back then it was called a task force and I worked on the Domestic Terrorism Task Force,” she said. “That doesn’t exist anymore because we no longer have a complete team that works on domestic terrorism, but obviously with the Oklahoma City bombings and 9/11, there was a lot of that.”

Kuhnell then jumped full time into her career in counterintelligence in 2009.

“I would say in probably 2003, the FBI really moved toward intelligence and that’s really where I got my passion,” she said. “I worked on both the counterespionage squad and also on the cyber squad, so I had a very diverse and exciting world introduced to me.”

Before joining the counterintelligence squad, Kuhnell and her husband at the time — who worked for the Bureau of Alcohol, Tobacco, Firearms and Explosives — trained bomb dogs.

“The government bought them for us and brought them from England and we would train the dogs with live explosives and teach them,” she said. “One of our favorite customers was George and Laura Bush. They loved having us because our dogs were the first dogs in the Metroplex that were certified because that was a new industry back then.”

Kuhnell said their dogs were “off-lead,” which means once they arrived at a location, they could take their trained K9s off their leash to scope out a building or area.

“So our bomb dogs were off lead and that was something that nobody had experienced, which is why George and Laura Bush liked them,” she said. “We would send our dogs in and say ‘find it,’ and they would just go work the room, work the offices and we would just watch them from afar.”

When she joined the squad, Kuhnell said it was important to her to bring her dog Mint along with her, and she did.

“He would sit in my cubicle and wait for me until it was time to go to work,” she said. “He was an amazing best friend. His name is actually Sir Bartholomew, he was actually knighted by the Queen of England and so he had an excellent experience in Northern Ireland and places like that. He was a rockstar when he came here.”

Besides counterintelligence, Kuhnell worked on the FBI’s domestic terrorism and cyber squads.

“When she first came in she was on a different squad, so I knew of her and even through there’s only three squads, we didn’t work together directly. She was not an agent, but there was a vast professional support system in the bureau so depending on what somebody can handle or their personality, there’s really a wide latitude in job description,” Kathy Aiken, friend and former bureau employee, said. “Once she came to my squad is when we became better friends.”

Aiken said she has not seen Kuhnell since she left Texas, but they were very good friends when they were both employed with the bureau in Fort Worth office.

“She was a go-to person for a lot of people because of her ability to think outside of the box and outside of the job description,” Aiken said. “If and when I move back to Texas, I consider we would always be friends and pick back up where we left off.”

In early 2015, Kuhnell joined forces with Tom Koonce at Lockheed Martin and together they developed cyber security that was more advanced than anything that existed at that time.

“I collaborated with her on kind of a game-changing cyber security capability that helps keep companies’ sensitive data secure,” Koonce said. “She was the lead, it was kind of mutually conceived I would say, but I was the funding person and she organized the team and then really kept us focused on integrating all the elements to bring this successful product out.”

During their time working together is when Koonce said he saw how creative and dynamic Kuhnell is and how focused she is in solving challenging problems for a diverse set of customers.

“That’s a gift in my mind, somebody that can do that,” Koonce said. “She accomplishes more because she’s extremely capable and she works hard. She’s passionate about her work and I’ve seen her handle challenging situations with natural diplomacy and professionalism. She sees the bigger picture and one of her gifts is she can lead others to put together the puzzle pieces so it all comes together.”

But in October 2015, tragedy struck and Kuhnell’s work was put on pause after a deadly wreck in Fort Worth.

“I was in a head-on collision with an illegal that was under the influence on a Sunday at noon,” she said. “He was going, according to the medical examiner reports, somewhere between 80 and 100 miles per hour in downtown Fort Worth. This was on University Drive and he was running red lights and he came up over a hill and hit me flat head-on.”

Kuhnell was in the hospital for a few months, wheelchair-bound and had to undergo a lot of rehabilitation. She said it’s one of the reasons she now calls herself the Texas Renaissance Woman and why she writes, has created a podcast and does public speaking.

“I remember waking up and the trauma surgeon standing there and he leaned over and whispered in my ear, ‘Young lady, I’ve been a trauma surgeon here for 30 years and I have never seen anyone survive such a horrific accident, so I just want you to know your mission on this earth is not over.’ I know that seems so simplistic but that gave me the will to fight through everything,” she said.

After her recovery, Kuhnell came back to finish the cyber security project with Koonce, and received high honors for her work.

“This particular product is now utilized across the United States government, so that was pretty cool and she won our company’s highest award for that, it’s called the NOVA Award,” Koonce said.

During that time, Kuhnell also had a side project going on — creating her first graphic novel “WINDE,” which is an acronym for Worldwide Intelligence Defense Education.

“It’s a graphic novel but back in my day we called them comic books,” she said. “And because I’m such an animal lover, I had to put my dog in there, so in there is Mint. So I wrote her like an agent that took care of espionage and all that.”

With all the experience, it was natural to Kuhnell that she morphed into an author and she began writing another book during her lunch breaks at the FBI.

“I have experienced everything from domestic terrorism to espionage and even white-collar crime, so they gave me the experiences that I needed in life really to give the foundation of my book, which is called ‘The Overcomers,’” she said. “It is basically a task force of folks that worked in the government.”

Kuhnell said the book is expected to be published within the next month.

Now retired, the Weatherford resident has settled on her ranch and continues to write “The Texas Renaissance Woman” blog, take care of her animals, has joined the family roofing business — Rebuild Texas — and does roofing with TopRail Construction and is learning to transition into a public lifestyle.

“I’ve lived here forever, for 25 years, and I didn’t know anybody because obviously I was working in counterintelligence and not a public person,” Kuhnell said. “So it was very hard for me to make the transition from being all secretive and not having any Facebook, not having any social media, and not doing anything and knowing anybody and not talking about anything I ever did.”

“We became fast friends,” Palmer said. “She has a heart of gold and provides her clients with unparalleled customer service — she’s the best.”

Koonce called Kuhnell is a very inspiring person to many people.

“She’s an extremely strong, capable and empowered woman. Her voice speaks for a lot of women in the workplace in my mind. I think that she serves as an excellent role model to the women that I have on my team and others that she meets day-to-day,” he said. “I can’t say enough good things about her character, her ethics, her morals. I’ve just found her to be an extremely capable person. She does all of that with patience and grace, that is also a gift.”