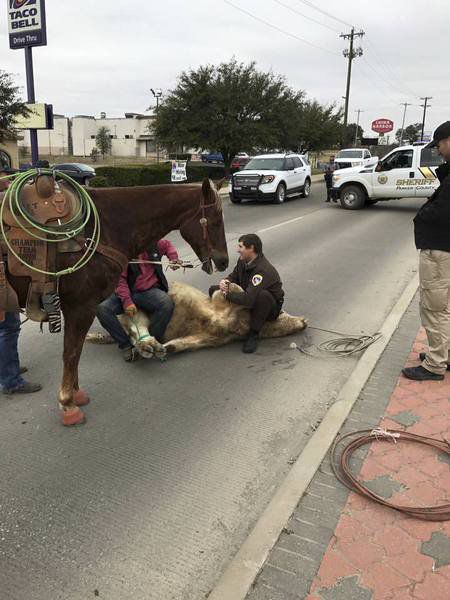 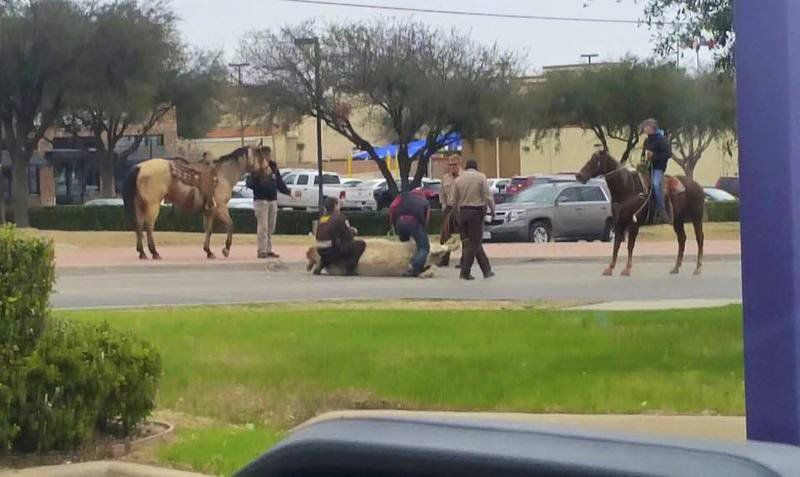 The steer that escaped from the butcher and led law enforcement and animal control officers on a pursuit through busy Weatherford streets Thursday got a stay of execution.

The animal was sent back to a ranch in De Leon, according to Hamilton Meats.

“Once you’ve chased an animal for two-and-a-half miles, throw ropes over it, run police cars into it, it’s not very good to eat,” said a man who answered the company’s phone but declined to provide his name.

Bound for slaughter, the steer escaped when he jumped out of a trailer, according to the company.

Weatherford police were notified around 11 a.m. of a steer running near the BBVA Compass Bank on Santa Fe Drive, according to police.

For about an hour and a half, Weatherford police and animal control officers from the city and county chased the animal, which ran from Clear Lake Drive to South Main Street.

The animal damaged a police patrol vehicle during the incident, according to Weatherford police.

“He was in the brush over by the school [Austin Elementary] when we got there,” Davies said.

The men chased the steer around the brush on horseback for a while but couldn’t rope him there, said Davies, who competes in rodeos and sells horses for a living.

“But when we got into the open, I didn’t really mean for it to be South Main Street,” Davies said. “But that’s where he went. I finally caught up to him going up that hill.”

Video of the incident shows the running animal and traveling vehicles dodging each other on the busy roads in Weatherford’s shopping district.

Davies said his main goal was to catch the animal before there was a wreck.

“It was a little dangerous,” Davies said. “I was just trying to make sure everybody was going to be all right.”

Though they didn’t plan to rope the animal in the middle of one of Weatherford’s busiest streets, Davies said they improvised.

“I just did what I had to do,” Davies said. “I just run up there and thank God everybody stopped and seen me coming. I come blowing out that intersection right there towards at Walmart ... I was going fast and so was that cow.”

Davies said he was lucky his horse had no shoes on at the time or he probably would have died.

“I’m just tickled to death that the good Lord spared everybody,” Sheri Gray, who witnessed the confrontation on South Main, said. “There wasn’t any car wrecks. The horse didn’t get hurt. The guy roping him didn’t get hurt.”

Davies said he has roped cattle on the side of the highway but never in the middle of town.

“I’ve never dodged cars and stuff like that,” Davies said. “It was one of the wilder things I’ve ever had to do.”

“If you are in the cattle business long enough, you’ll see everything at least once,” Hamilton Meats said.

After the steer who escaped from slaughter in Weatherford made national news, PETA (People for the Ethical Treatment of Animals) made an offer…

Theatre Off The Square to present ROCKET MAN