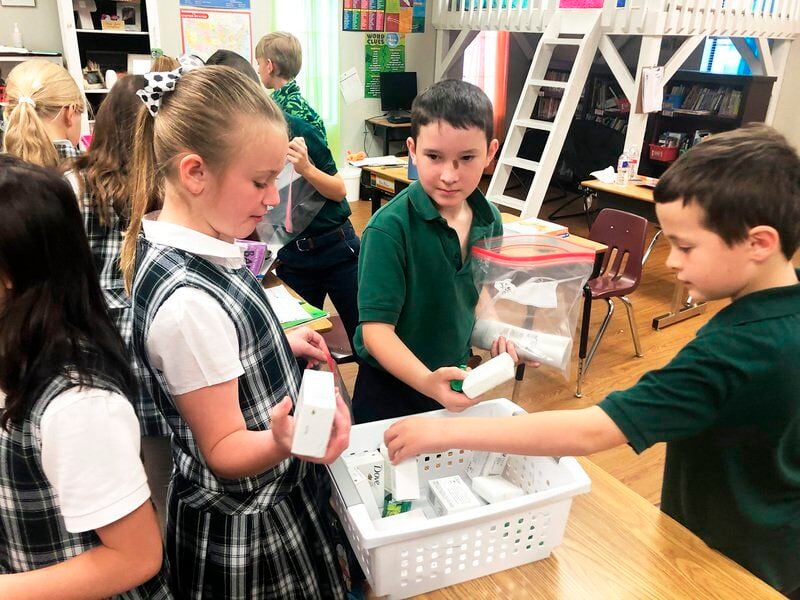 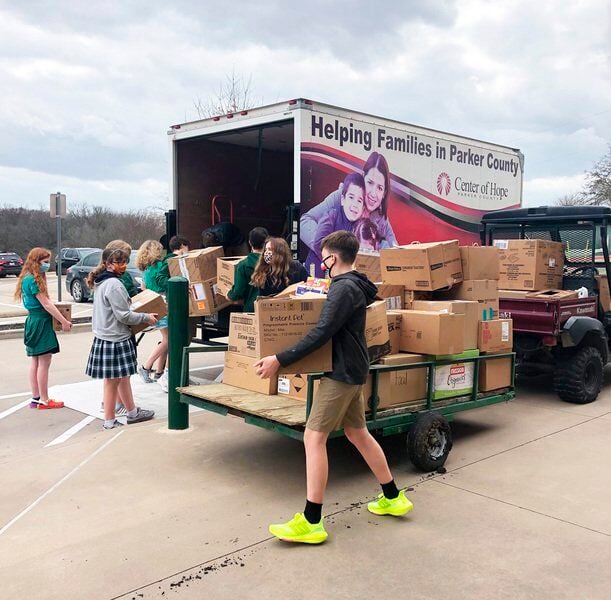 Trinity Christian students help load supplies to be distributed at Center of Hope’s nine summer camps in the area.

Trinity Christian students help load supplies to be distributed at Center of Hope’s nine summer camps in the area.

As high school students at Trinity Christian Academy are supporting missions around the country and the globe this month as part of its I-Term program, the younger Eagles will help those here in Parker County.

I-Care is a sister program for I-Term and allows pre-K to eighth grade students to participate in the school’s service component that is ever-present but that takes center stage the week before spring break.

“We wanted to give the younger children a chance to participate in something while the older students were gone,” said Dr. Steven Newby, TCA’s elementary school principal. “So Becky Staggs and I got our thoughts together and came up with a combination mission/outreach.”

Staggs, the secondary assistant principal, said it’s important to start the idea of community early and that this year’s focus of Center of Hope’s Camp Hope does exactly that. Children at the camps are able to eat a healthy meal which they learn to prepare themselves and then take a home a bag of groceries, as well as toiletries.

“It’s students helping students,” Staggs said, explaining that Camp Hope is a summer program that was created to combat hunger issues for low-income children who not receive free or reduced school lunches during the summer.

Throughout the second week in March, various new and unopened items were collected including travel-size hygiene products like toothbrushes, toothpaste and shampoo and new and gently used elementary-aged children’s books, as well as easy-opening food like peanut butter and jelly, canned proteins and fruit. Once all items are collected, students then create bags with the items so they can be presented at the 10 different camps in neighborhoods around Parker County.

“It’s them helping their peers; it’s powerful giving to someone who is just like [them] but doesn’t live like [them],” she said. “TCA is a huge donating partner for us and it’s something that we count on.”

Anna Nelson, an eighth grader at TCA and the middle school student president, said it feels good to help other children her age.

“I like it and it’s fun to bond with other students while doing it,” she said, adding that putting the bags together is a great way to get to know fellow students. “We’re not going to be able to do it like we did last year [because of COVID-19 protocols] with more groups but it’s still rewarding.”

Staggs said this is the third year for a collaboration with Center of Hope and that it’s always rewarding to see how much is donated each year by parents and students and how much help is still needed.

“As a psychology teacher, I talk about altruism but this is the best example of that,” she said. “The students always tell me when asked why they’re helping others that they do it because they want to; no other reason than that and it’s everything altruism exemplifies.”

Though Camp Hope was initially developed to help with food assistance, it has expanded to include a library where children have the opportunity to take home books, life skill lessons, recreational activities and Bible studies.

“We love the idea of reaching the next generation,” Buchanan said. “We know that poverty starts early and we want to impact that next generation so the cycle doesn’t continue.”

Buchanan added that some children have a spiritual poverty, as well.

“We have kids in Parker County who don’t know who Jesus is,” she explained. “We will ask them what they know about Jesus and they will respond that, well, he was born at Christmas.”

Once all the bags are completed, representatives from Center of Hope pick them up from TCA for distribution at Camp Hope. Each year, upwards of 500 children per summer enroll in Camp Hope, Buchanan said, adding that “the need is always there but now more than ever.”

Elementary and middle school students made a big impact last week during I-Care, donating 2,250 hygiene items, 2,300 books and 3,247 food items. These supplies are distributed at Center of Hope’s nine summer camps in the area where children in need not only receive the donations but also hear about Jesus. Students brought items to school on their own and classes boxed items and prayed over the children that will receive them.

Anyone interested in volunteering with Camp Hope can email amy@centerofhopetx.com.