A photo of Lawson D. Gratz 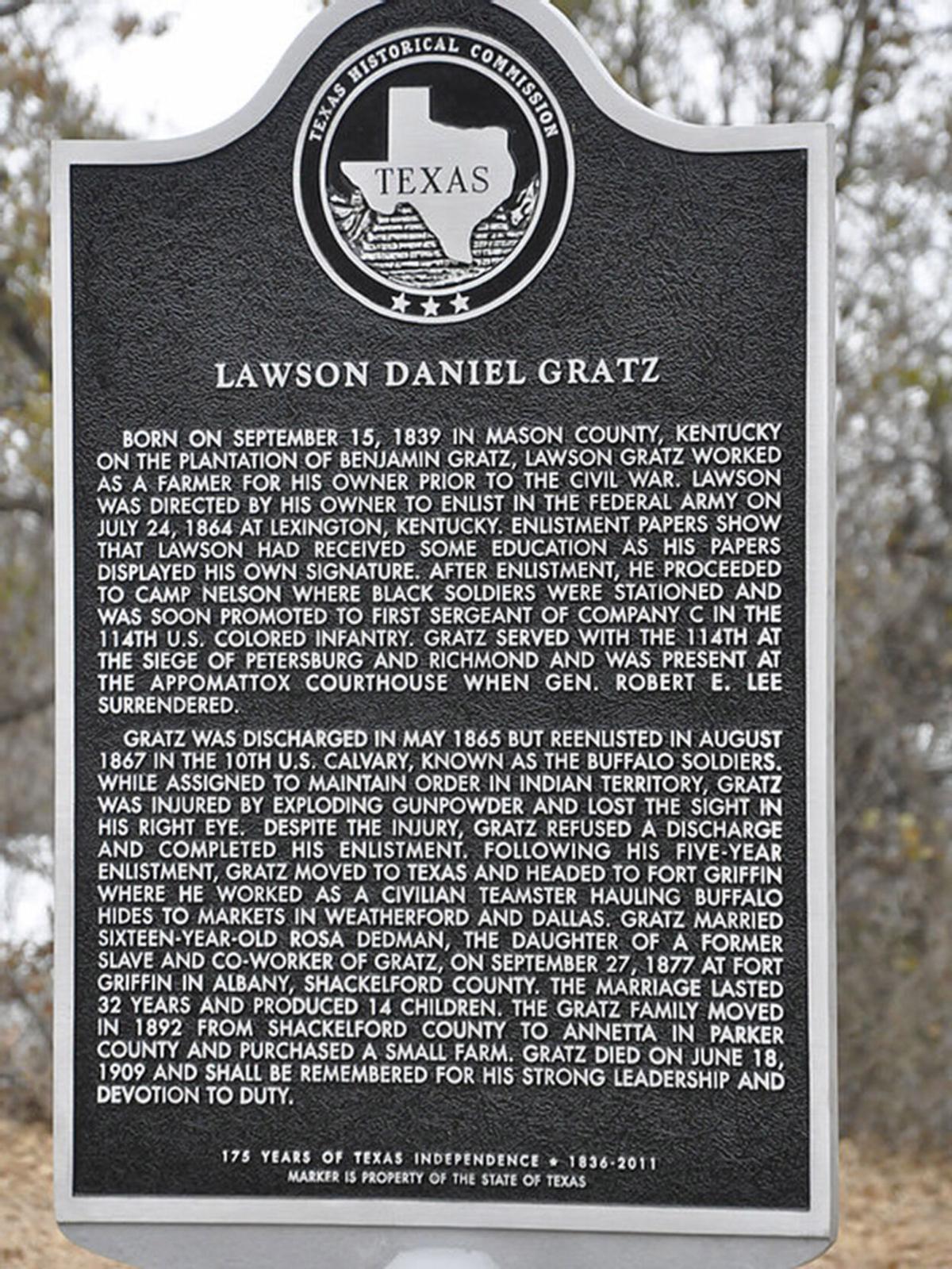 It's been a long time coming for the family of Lawson D. Gratz.

The former slave and Buffalo Soldier, who spent his remaining years in Annetta, will be inducted into the Texas Trail of Fame during a ceremony Oct. 21 at Billy Bob's Texas in Fort Worth.

It's an honor — and a history — his great grandson, Josef Gratts has spent years waiting on.

"I have dedicated the rest of my life to bringing his life to Weatherford and Parker County," said Gratts, 75. "I was 50 years old when I started researching his history, and if I had known his history when I was in elementary school at Mount Pleasant, it would have put me in a different frame of mind knowing about the Buffalo Soldiers."

Lawson Gratz was born a slave to the Benjamin Gratz family in Fayette County, Kentucky on Sept. 18, 1836. He was enslaved from his birth until the age of 26, when he volunteered for service in the 114th United States Colored Infantry in 1864.

Gratz was somewhat educated and could read and write, and officers in his command said that he was above average in his education and that his ability to work with white officers and take instructions and pass those instructions down to the enlisted men was a big factor in his promotions. He was promoted to first sergeant in less than a year and worked closely with the officers of that command.

"U.S. War Department records obtained from the National Archives in Washington, D.C. show that Grandfather was missing from his troop on four occasions and would be written up by his commander of the 114th USCT. as being (absent without leave)," Gratts said. "Muster rolls show that Gratz would lose his stripes, breaking him often to private or corporal. On these occasions, he would be missing for two to three months at a time and eventually found at the Freedman's Hospital in Louisville, where he was found recuperating from malnourishment and treated for other wounds.

"Each time upon his return to 114th, he would receive his stripes back through the orders of the War Department, Department of Defense stating that he was on special duty for the department of defense."

Records show that Gratz was part of the Black Dispatches during the Civil War, a term used for Blacks who provided intelligence on Confederate forces — better known as a spy.

"As a dispatch, he would be sent into and behind Confederate territory to keep track of the number of troops, the number of heavy guns such as the different sizes of canons and how many troops there were," Gratts said. "This situation was made for ex slaves because they could be sent in with slaves who were working in the fields and doing other slave duties.

"Vital information during the Civil War from Black Dispatches allowed the Union Army to make war altering decisions which lead to the Union victory over the South."

The 114th United States Colored Troops fought in many battles during the Civil War, including siege operations against Petersburg and Richmond on the Bermuda Hundred Front, Appomattox Campaign, Hatchers Run, the fall of Petersburg, the pursuit of Gen. Lee and the surrender of Lee and his army.

Following the end of the Civil War, the 114th United States Colored Infantry units were sent to Texas as part of an American buildup of troops intended to discourage French operations in Mexico. The 114th operated along the Rio Grande River around Brownsville and the Matamoros border until April 1867.

"Lawson Gratz moved to Washington D.C. where he lived briefly when he learned that the Congress sought to reorganize and restructure the army after the Civil War and passed the Army Organization Act on July 28, 1866," Gratts said.

"The army was looking for seasoned veterans that had spent time in the Civil War, so grandfather signed up for a four-year hitch in the 10th Cavalry," Gratts said. "Recruitment for colored soldiers was very strict and most men who had no experience in the Civil War likely were sent home."

On Aug. 6, 1866, Gen. William T. Sherman, Commander Military Division of Mississippi, issued from his headquarters in St. Louis, General Order No. 6, which established the first command structure for the 10th Cavalry. The unit was initially based at Leavenworth, Kansas, but the fort's commander was openly opposed to Blacks serving in the regular Army. Col. Benjamin Grierson sought to have his regiment transferred, and received orders to move them to Fort Riley, Kansas.

The Indian campaign of the West provided the signature recognition for the 10th Cavalry and shortly after, the 10th was transferred to the west, where they and other cavalry units would be engaged with the Native Americans in battle. Between 1867 and 1875, the 10th was engaged in extended campaigns against the Cheyenne, Kiowa, Comanche and the Apaches in Kansas, New Mexico, Arizona and in the Indian territory of Oklahoma.

"Grierson stated that in a battle in 1871, several companies of the 10th were outnumbered by a band of Comanche in Indian territory," Gratts said. "The Black soldiers literally had their backs against the wall of a canyon and fought off a band off the Comanche until their brothers in arms came to put down the Comanches. It was at this time in history that the U.S. 10th Cavalry was recognized by the name Buffalo soldier!

"The Indians said that they respected the fighting skills and the tenacity of the Black soldiers and compared them to the revered Buffalo."

The Black soldiers made the buffalo part of the regimental coat of Arms a few years later and the term Buffalo Soldier would become synonymous with all the Black troops of the day including the 9th, 24th and 25th Black regiments. Following the Indian wars, the 9th and 10th cavalries were dispatched to forts in Texas, New Mexico, and Arizona.

"Grandfather was discharged at Fort Richardson at Jacksboro, Texas," Gratts said. "Lawson Gratz made his way to Fort Griffin /Albany, Texas, where he worked as a teamster hauling hides to Weatherford, Fort Worth and Dallas."

Gratz would eventually move his family to Annetta, where he purchased a small farm. He died there on Sept. 18, 1909. In August 2012, a Texas Historical Marker was dedicated to him with friends, family and many local historical members in attendance.

The Texas Trail of Fame banquet begins at 6 p.m. Inductees have been nominated for their help in creating, or preserving, Western heritage.

Gratz will also be honored with a biography of his contribution and a drawing of his likeness in the lobby of the Livestock Exchange building in the Fort Worth Stockyards.