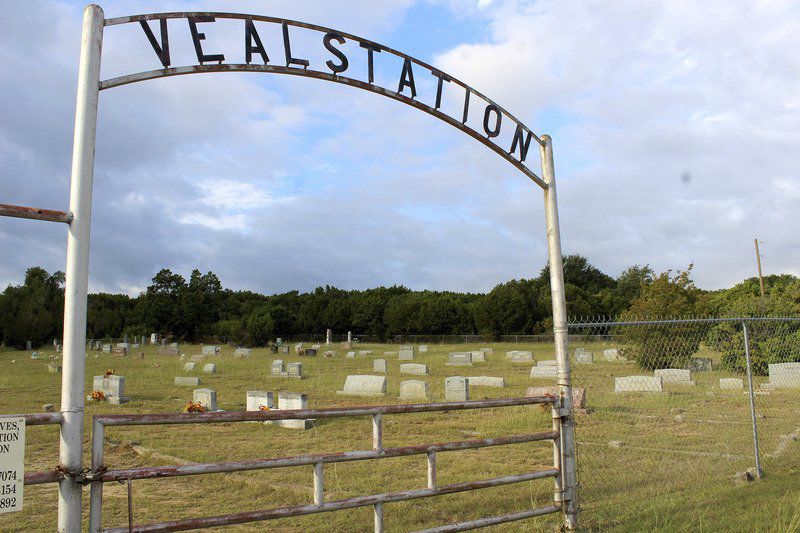 The Veal’s Station Cemetery can still be visited today on Veal Station Road in Springtown. 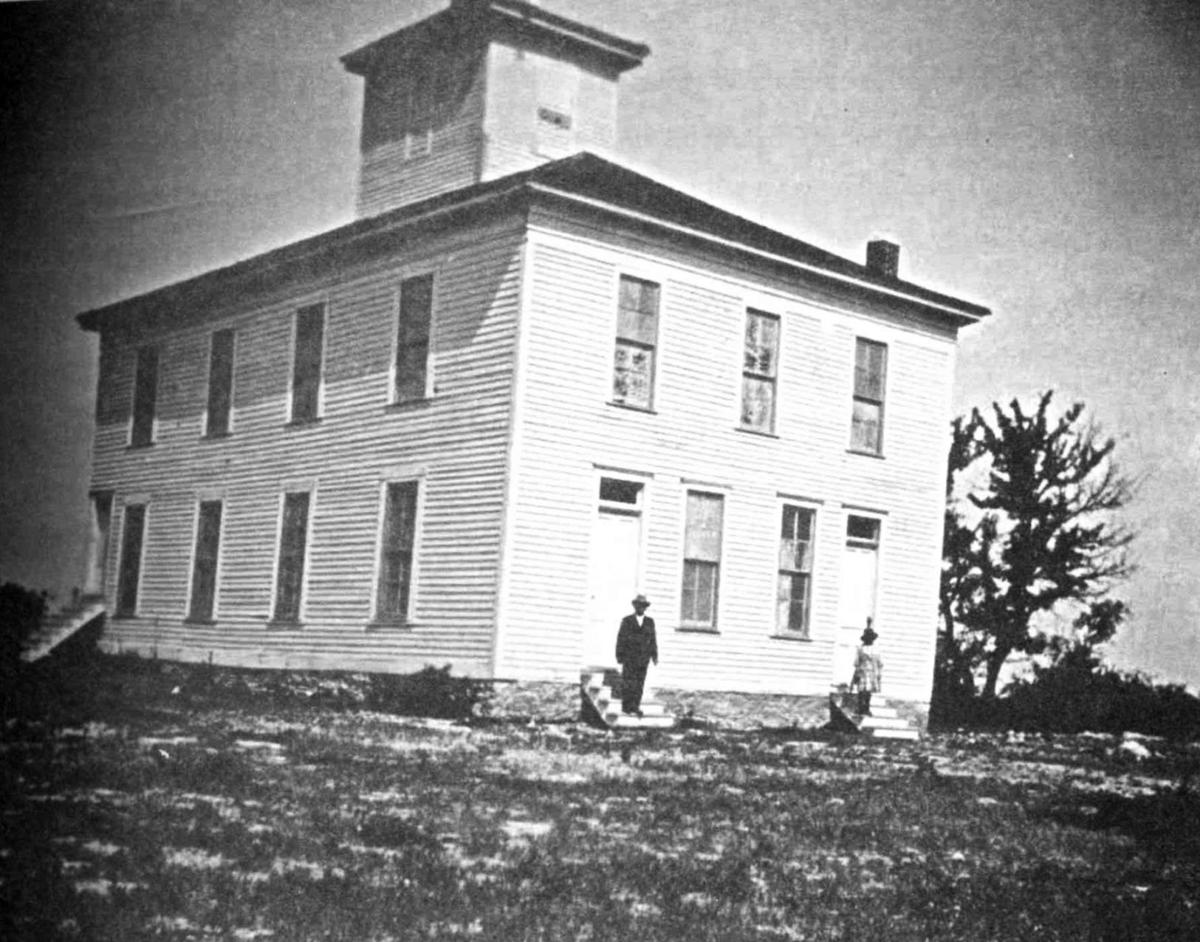 A photograph of the Y.H. Isbell, Jr. and Ina Mae Woody at Veal’s Station Hall in the early 1900s. 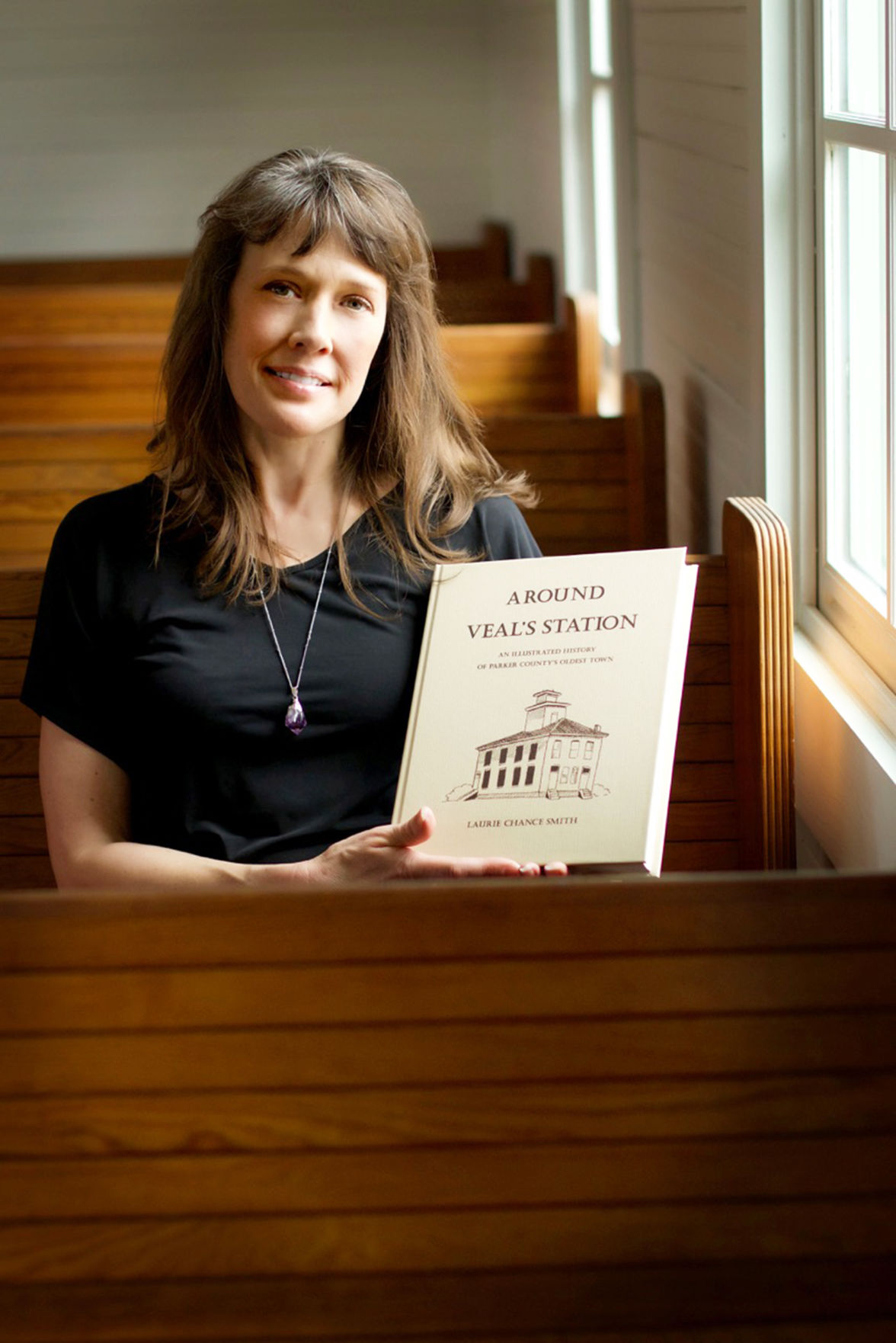 Laurie Chance Smith recently published a book about the oldest town in Parker County, Veal’s Station, after finding out she was a descendant of four of the first settlers.

The Veal’s Station Cemetery can still be visited today on Veal Station Road in Springtown.

A photograph of the Y.H. Isbell, Jr. and Ina Mae Woody at Veal’s Station Hall in the early 1900s.

Laurie Chance Smith recently published a book about the oldest town in Parker County, Veal’s Station, after finding out she was a descendant of four of the first settlers.

Veal’s Station is the oldest community in Parker County, with the first settlers arriving in the early 1850s, and to this day has homesteads occupied by the original settlers’ descendants.

“The first white settlers arrived in the early 1850s. Among them was William Veal who opened a general store a quarter-mile from the site of the present town. In 1857, Veal and fellow settlers John Lantz and G.W. Coleman constructed a large building that served as a Masonic meeting hall and a common school. A huge bronze bell above the building was used to warn settlers of imminent Indian attacks,” according to a historical article written by David Minor of the Texas State Historical Association. “Soon after the building was finished, Veal moved his general store near the school, and gradually the place came to be known as Veal’s Station. By the late 1870s the Indians had been driven out, and the town began to grow.”

In 1890 a boarding house for girls and a dormitory for boys was constructed and was made into Parsons College. There were more than 500 students that attended at one point, but on Dec. 10, 1893, the college burned down.

After it was bypassed by the railroads, the town ceased to grow and gradually the number of businesses, students and residents declined, according to the article. In 1936, the state erected a historical marker at the site of the school building.

“It was the first town in Parker County and growing up in the 1800s were tough times — the smallpox outbreak and [having] to fight Indians,” Parker County Historical Commission Historian Donna McCauley said. “I would love to see some archaeological digs out there for artifacts for our history.”

Laurie Chance Smith, a descendant of four of the early Parker County settlers, recently published a book about Veal’s Station and its history.

“I’m a descendant of four of the early settler families in Parker County — the Cockburns, the Tuckers, the Gilleys and the Wrights, and members of all four of those family lines are buried at Veal’s Station Cemetery. I was visiting the cemetery with my mother several years ago and I asked her why there wasn’t a historical marker for the cemetery, it is surely one of the oldest cemeteries in Parker County. Like any good mother would do, she winked, and said, ‘Well, that would be a good job for someone,’” Smith said. “So I started my quest that day to get the historic Texas cemetery marker for Veal’s Station Cemetery and while I was gathering the history to present to the Texas Historical Commission, people started sharing suitcases filled with information on the community — the history, photographs, historical records — just an extraordinary amount of information.”

All that remains of Veal’s Station now is the cemetery.

Smith said that’s when she saw a book in the making and decided to run with it, publishing “Around Veal’s Station: An Illustrated History of Parker County’s Oldest Town” on June 30.

“I thought if I didn’t copy and record all of this, it would simply be lost,” Smith said. “So the book is organized along a timeline and it tells the story of Veal’s Station in order to the best of my ability and knowledge. A lot of the homesteads out here are still occupied by descendants of those original settlers and so it’s really interesting to hear the history of the land and the structures.”

One of those homesteads includes the William and Elisabeth Woody Homestead and the Woody Creek Farm, which will be receiving an official historical marker from the Texas Historical Commission on Oct. 26.

According to Smith’s book, Bill and Elisabeth Woody walked from their home in Roane County, Tennessee to Texas in 1846. In 1853, their Comanche guides took Bill to Veal’s Station.

“While living in their barn, Bill and Betsy planned and built their home. During 1854, most of the white settlers in Parker County lived in dugouts in the earth or log cabins,” according to the book. “The Woody House is considered the first permanent home in Parker County because it was built of yellow pine lumber.”

The current owners of the Woody homestead, Marc and Elizabeth Salvatore, have made historically-accurate renovations and the subject marker was approved by the THS in 2018. The Woody Cemetery received its historical marker on Oct. 8.