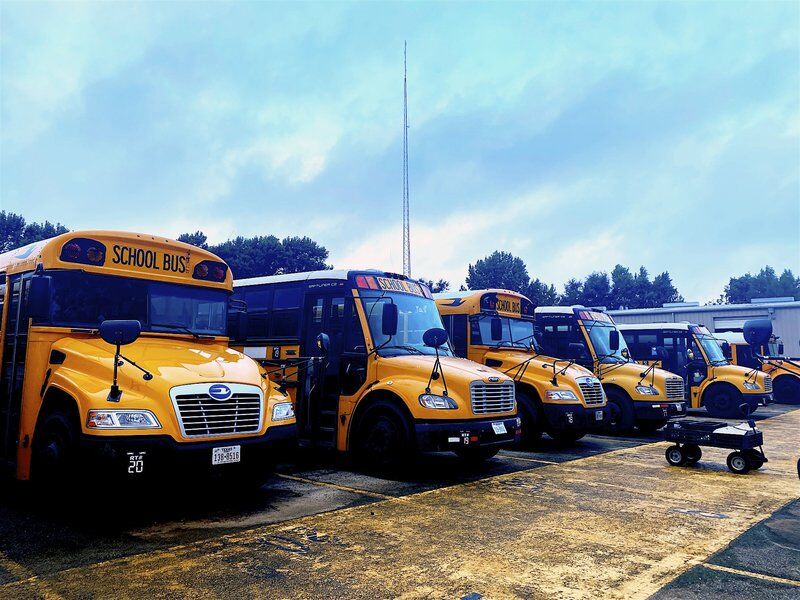 Buses from the PISD are lined up following their morning run. The cart out front holds sanitizing supplies so bus drivers can prep their buses following morning and afternoon routes. 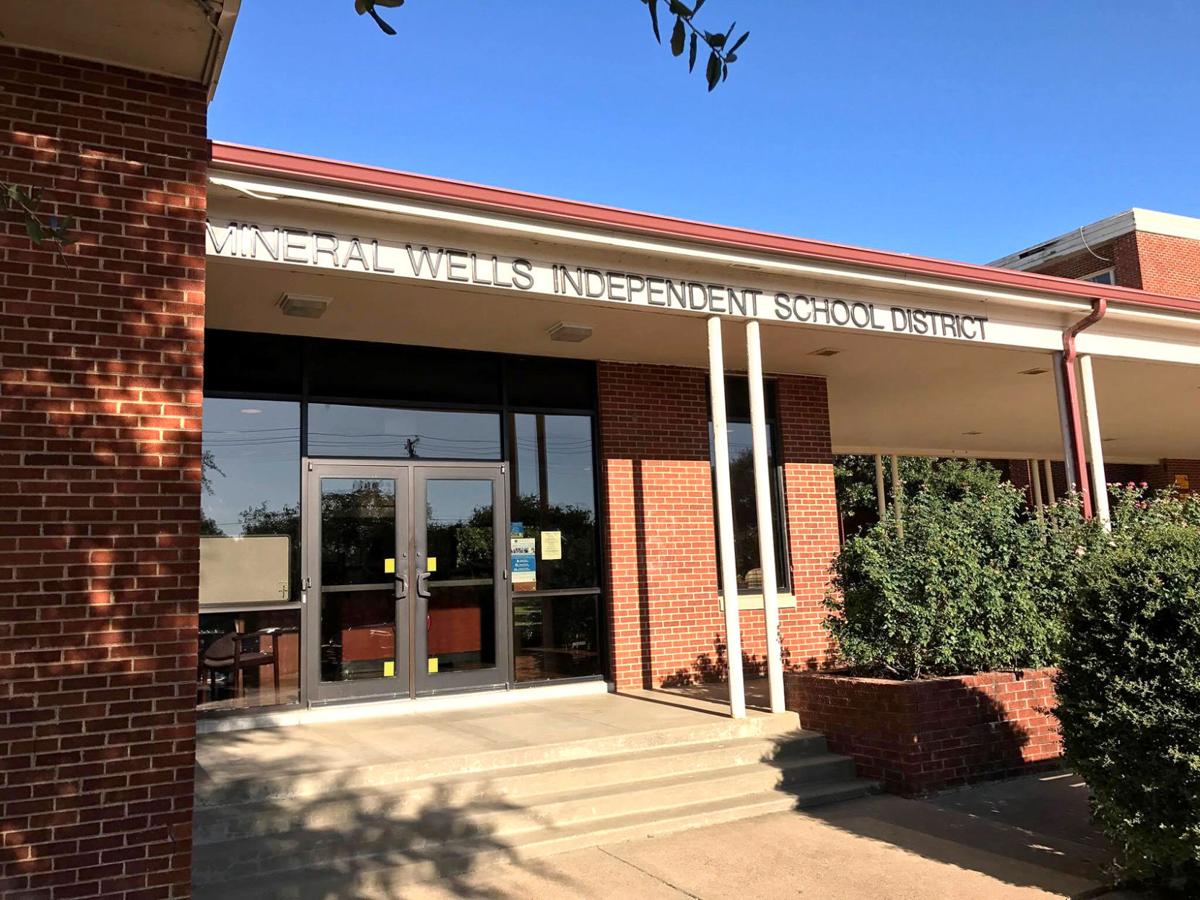 The Texas Supreme Court lightened the load for school leaders who face battles on multiple fronts courtesy of coronavirus and its Delta variant.

Prior to the ruling more than 50 districts across Texas put their own mask mandates in place, rebuffing the governor’s order as they work to combat the virus’ spread.

For more than a year and a half, schools have grappled with how to continue educating in and out of classrooms while protecting students and staff — and staying in compliance with state mandates and funding parameters.

Last year the message was cohesive from Abbott, to the Legislature to the Texas Education Agency: keep people safe. The state’s accountability system was adjusted and schools were not penalized for attendance. Policy makers worked to accommodate students who could be learning virtually on the floor of the living room one week or sitting at a desk behind plexiglass the next.

Many kids did both last year, and school systems received uniform funding to make it work.

This year, the TEA has said there will be no funding for remote learning and with the virus continuing its march into classrooms, districts are trying to walk a thin line.

When the State of Texas Assessments of Academic Readiness (STAAR) test results were returned in the summer, the TEA said those results would not be used to evaluate students and teachers because it was a year like no other.

Though not used for evaluation, the results cannot be ignored as teachers are returning to classrooms with kids who are behind where they’d normally be.

“This learning loss kids have had is not going to be miraculously fixed,” said Jason Marshall, superintendent of Palestine Independent School District.

With the surge in full swing in Texas, this may be an all-too-familiar year. The big difference? A lack of unified messaging and funding.

While one piece was resolved Thursday, there still are murky waters to navigate.

Dr. John Kuhn, the superintendent of Mineral Wells ISD in Palo Pinto County, about an hour west of Fort Worth, said school districts are in a tough spot between the guidance of the medical community and federal agencies, and directives from the state’s executive branch.

Prior to the first day of school for Aledo ISD, a district of about 6,400 students in east Parker County, several residents addressed trustees regarding COVID safety protocols.

Dr. Monica Pradhan Jain said her daughter did virtual learning last year, as it was the best option for their family. This year, however, that is no longer an alternative.

“It confuses me why we would send our daughter back into the school building with everybody unmasked at this point right in the middle of a surge,” she said. “The frustrating part for me is that we don’t really have any other options for her at the moment.”

With only a few days before schools began, the TEA said it would allow parents and students to take 10 days off for quarantine two times during the year in case of infection or exposure.

To draw funding for that time off, however, a teacher would have to provide one-on-one virtual instruction for four hours a day.

Marshall said that is just not possible.

“Presently, there is no practical option for Texas schools to provide remote instruction,” said Huntsville ISD superintendent Dr. Scott Sheppard. “The state removed funding, other than an extremely limited 20 day option that has too many strings attached to actually use.”

As a pediatrician with Cook Children’s Medical Center, Jain said she’s watched as the hospital has gradually filled up as COVID cases rise.

Districts across the state are sifting through requirements to find their way forward.

A TEA guidance letter was issued on Thursday, a week into the school year for many, recommending public schools look to public health officials as well as legal counsel to make their decisions regarding masks. The letter also specified districts must notify teachers, staff and families of a positive COVID-19 case in a classroom or extracurricular activity.

Before this letter, only the state was recommending the notices.

In the PISD, Marshall said schools are in a tougher position than they were last year because of the discrepancies and the ongoing changes.

“The message this time is, ‘yes we want you to keep people safe but there is an accountability system and if kids don’t come to school you are going to be punished for their attendance,’” he said.

In the meantime he said the district will hold up their end to keep things clean and try to keep people safe. He also urged families to do whatever they think they should to keep kids safe.

Kuhn sent out a letter to staff and parents listing the district’s protocols, which include optional face masks, social distancing, cleaning and directions for staff or students who may exhibit and symptoms.

MWISD also partnered up with Palo Pinto General Hospital this week, offering free COVID vaccines for all district employees, and has established local COVID-19 days (10 per employee) to ensure staff who need to self-isolate or quarantine will have extra days for that purpose.

“In addition [to our protocols], we intend to monitor caseloads among our students and staff throughout the year, and we reserve the right to tighten down on COVID-19 protocols if and when caseloads dictate a more robust response,” Kuhn said.

In the Athens Independent School District, Toni Garrard Clay who is the district communications coordinator and mayor, said the districts are doing “fastidious” work to clean surfaces, distance students, use see-through barriers and track student movement.

The Corsicana Independent School District is also implementing vigilant cleaning regimens that encompass common areas, classrooms and other facilities, according to its board of trustees.

With 5,765 students in the district, and that number expected to rise following Labor Day, CISD superintendent Dr. Diane Frost reported 11 students and 20 staff positive with the virus as of Aug. 16.

CISD is partnering with two pharmacies to provide free vaccination clinics for students 12 to 18 years old.

The Athens ISD has also hosted a free clinic and plans to do a follow up for any students who need a second dose or to get their first.

The Centers for Disease Control says the vaccines are effective, even against the delta variant. Though they are not 100% effective and some fully vaccinated people will experience infection, it still helps against serious illness and death.

With large swaths of the Texas population hesitating over vaccines, rural communities still see low rates. In Anderson County, home of PISD, 35.75% of those over the age of 12 have been fully vaccinated. In Henderson County (Athens ISD) that number is 34.56% and in Navarro County (Corsicana ISD) it is up to 41.22%. Parker County (Aledo ISD) is at 41.72% and Palo Pinto County (Mineral Wells ISD) is at 33.6%. And while approval for those under 12 is expected later this fall, there is doubt about whether the parents who will not get vaccinated will be taking their children to be.

While it may be considered untenable to use last year’s STAAR results to evaluate students, the numbers are still daunting.

Students are not where they should be.

“We have got to do something to accelerate instruction,” said Chris Kiser who is the assistant superintendent of instruction for PISD.

The TEA knows there is no time to lose in playing catch-up for lost academic progress.

TEA has offered TCLAS, or Texas COVID Learning Acceleration Supports. The initiative is a “set of funding and targeted supports available to Local Education Agencies to accelerate student learning in the wake of COVID-19, utilizing state and federal funds,” according to the TEA website.

For districts like PISD, leaders are taking everything they can get to make it work.

Marshall said his district has specifically saved part of their Elementary and Secondary School Emergency Relief Funds which are part of a nationwide grant, in case their schools have to go virtual and the TEA isn’t reimbursing.

“At some point in time, unfortunately, if this situation builds and we are not going to get help at the state level — you know the state of Texas is not happy we got ESSER funds from the feds,” he said. “They may come and say, ‘you can shut down for three weeks if you want to, but if you want any funding for it, you are going to have to use your ESSER funds. We are fully aware of that.”

The funds are available through the $1.9 trillion American Rescue Plan Act of 2021, which stipulates their distribution through state education agencies in two phases over the next three years.

PISD was awarded $7.9 million in grant money to meet the needs. The first two-thirds of the money has already been awarded through the TEA — $5.3 million.

This supplement is designed to bridge those gaps and PISD began with reducing class sizes, adding aides and purchasing high-end software that each child will have accessible via their own device provided by the district.

Kuhn said that the virtual option was largely unsuccessful among students in his district, with a high rate of non-completion of assignments, poor grades and very low passing rates on exams.

There are varying causes for the lack of success — from students and parents struggling to navigate the online portals to connectivity issues in areas without sufficient services to teachers being able to successfully prepare and distribute lessons.

The curriculum director for PISD, Sharon Reed, explained last year teachers were having to take their in-class lessons and try to convert them effectively for online learning. It required videoing themselves, uploading and adding components. Software the district has purchased through ESSER funds will eliminate all of this for the educators.

“If one is struggling, it places where you are with hopes of moving you up. Teachers aren’t having to design the lesson,” Kiser said. “The program designs it and at the grade level they are on.”

On Friday, PISD schools had a half day for students to take home their devices and work remotely. The plan was to assess connectivity and students ability to access the new software, and prepare for closures they hope will not come.

Many districts do not have virtual plans in place as there are no current practical options.

“Even if a school is forced to temporarily close due to COVID, the state will not fund remote instruction. If a district were to temporarily suspend classes, TEA has made it clear there will be no COVID waivers for attendance,” Sheppard said.

“Our job now is to make things as safe as we can while simultaneously respecting the values of our community, following the guidance received from the Texas Education Agency and adhering to the governor’s executive orders,” Kuhn said.