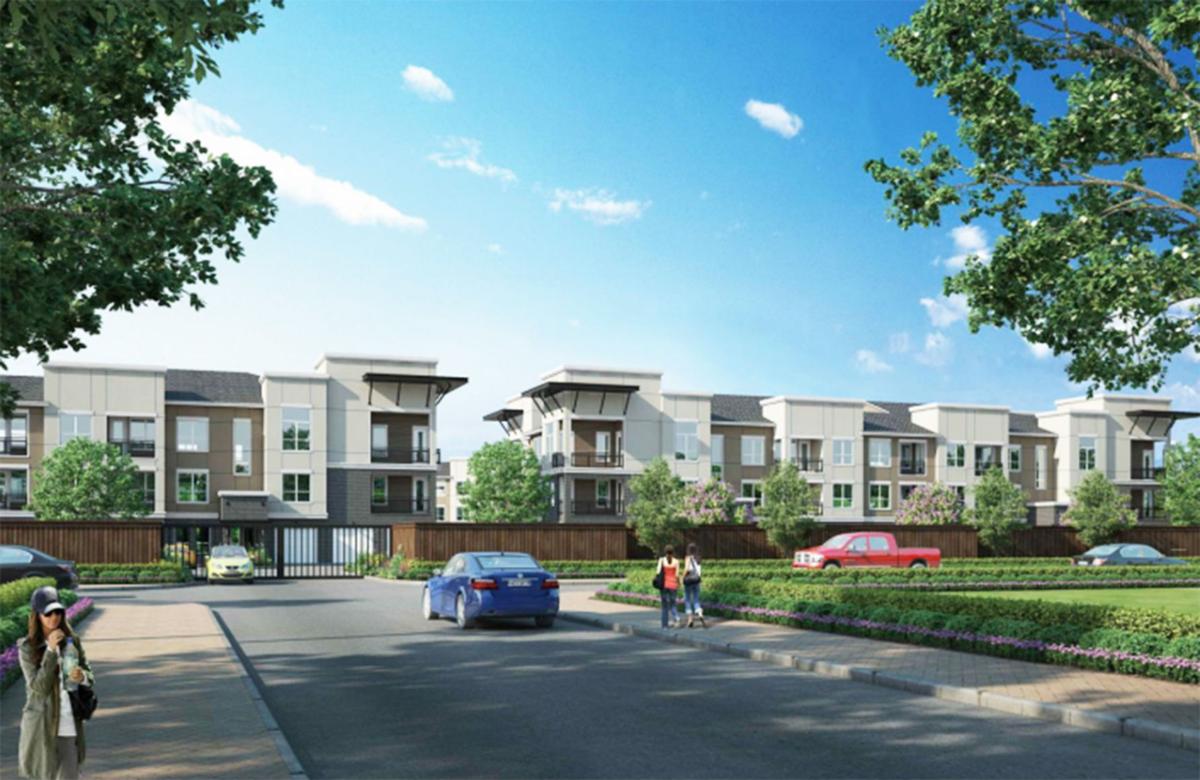 A rendering of the design for Oxford at Weatherford, a planned multifamily development off Interstate 20 near Alford Drive. 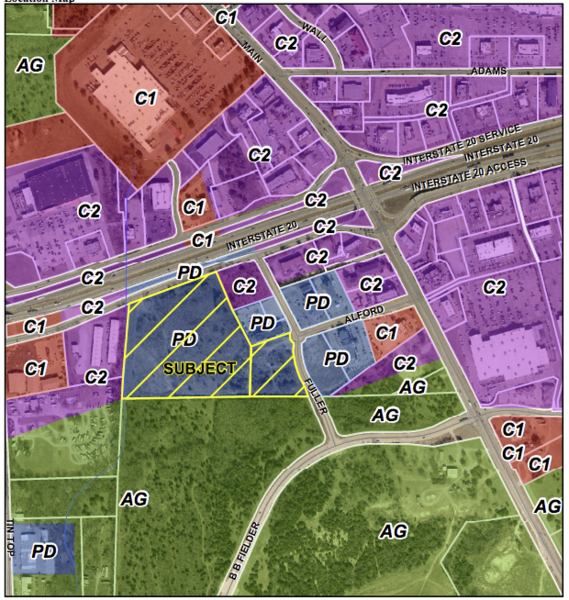 An overhead map showing the location of a planned multifamily development, labeled "subject" off of Alford Drive in Weatherford.

A rendering of the design for Oxford at Weatherford, a planned multifamily development off Interstate 20 near Alford Drive.

An overhead map showing the location of a planned multifamily development, labeled "subject" off of Alford Drive in Weatherford.

After continued discussions about the planned development, the Weatherford city council approved a zoning change for an 18.262-acre multifamily development off Interstate 20 East and Alford/Fuller Drives in a 4-1 vote.

The project was brought before the council twice with changes before additional changes were discussed Tuesday night. The motion was to change the zoning district from planned development to mixed ese development.

“This is the third time we’re going for PD, I would like to think the third time is a charm. The first one we had a large four-story building and we had it close to the interstate — we did a sound study and that study said we needed to be a certain distance back from the interstate so we came back, did a new PD based on that sound study and the distance we had to have. The first two PDs were done by a different developer and that developer never bought the property. He’d been working on the PD, trying to get financing pulled together so he could move forward with the project, but that never came together and so he never owned the property up until the day it was transferred to the current owner,” Shannon Nave, engineer on the project from Baird, Hampton and Brown, said. “The current owner has 13 other projects and they’ve built multiple — the original developer had never built a multifamily development — so the individual who is now the developer, Justin Swartz with Oxford [Enterprises], has extensive experience. Their model is to buy and keep these projects long-term, so their concerned about how it looks, how it operates, how it helps the community and they’re looking for long term success there.”

The project will feature 310 apartment units, a pool, a clubhouse, a fitness center, a trail right outside of the property for all-resident use, a dog park, a large amount of garage and covered parking and two lots for retail and/or restaurant space. The property will have gated entry and fencing, and include individual gates for trail access from the apartments.

The layout of the site plan will change from two four-story mixed-use buildings and eight multifamily building with 25,908 square feet of retail/commercial space to 10 equal sized multifamily buildings with 11,500 square feet of retail/commercial space; increasing units from 282 to 310; replacing the live work units and retail inside of “big house units” by a shared office/workspace for residents; and removal of kitchen facility and clothes care center from community center and replaced with a dog park. Other changes can be reviewed in the city council’s agenda packet.

“We’re Oxford Enterprises, have been in business for approximately 25 years, and we’re a family business — it’s my father and myself — and as [Nave] mentioned, we own 11 projects and all we focus on is the state of Texas,” Swartz said. “We own our own management company, we’re very hands-on, we don’t sell anything and we take a lot of pride in what we do. We build communities, we have very low turnover and we purchased this particular property because we believe in Weatherford, we love the market, we believe in the growth and the future here, and we’re very excited to get this project underway.”

A couple of council members expressed concerns about the loss in retail space as well as traffic congestion the project might bring.

“We’ve taken 25,000 square foot of retail, which is revenue-generating for the city, and we’ve narrowed that down to two lots that total 11,000 square feet — one of which is almost guaranteed to be a fast food restaurant. So we’re putting in an apartment complex in an area with some of the shadiest hotels that we have in our city and we’re trying to bring it up, and I’m not saying this product doesn’t look good, but we’re being chipped away at on what’s being offered with this property every time we go through this planned development process,” Place 4 Councilmember Kevin Cleveland said. “We started off with multiple buildings in trying to negate the monotony and now we’ve chipped away at that, we started off with the idea of combined living experience on the property in having places to shop and to work all within that footprint and we’ve done away with that. Now we’re doing away with the potential for tax revenue on Interstate 20 and you’ve all heard me say it many times, Interstate 20 is our financial engine for Weatherford and we’re giving away some of the gas that goes in that engine. I’m not saying that I’m not for this 100%, I’m just wanting us to make informed decisions and realize that we are giving up income in a very valuable piece of commercial property that could produce some sales tax returns.”

Cleveland added that with the potential of a fast food restaurant, the drive-thru location would be problematic with its proximity to one of the access points into the complex.

Mayor Pro Tem Heider Wilder said she agreed with Cleveland’s statements and felt that reducing the driveway entrances into the complex from four to three would create congestion.

“This has become, instead of what was really a focal point of commercial, more residential and we’ve created a smaller footprint — we’ve reduced driveway and access space so people are going to be more congested there because residential has more cars to and from and going through,” Wilder said. “When it was first done with all the commercial, it wasn’t a congested area, there were a lot of opportunities for people to navigate through easily and we’ve chipped away at what our main vision for the corridor on I-20 was.”

However, Weatherford Engineer Bill Smith said they are not looking at an increase in trip generations with the proposal.

“With the access points, the one that they removed was fairly close to another so that one doesn’t really concern us. As far as the drive-thru for the potential [fast food] restaurant, we would review that to make sure congestion problems did not occur,” Smith said. “We’d make it to where they could sequence a route for cars without impact the traffic coming in.”

Weatherford Mayor Paul Paschall and Place 2 Councilmember Jeff Robinson said they are looking at the project a little differently than Cleveland and Wilder, though Pascall said he was a little concerned with the potential of a fast food restaurant.

Robinson said it was a little different looking at the project now from when it was originally presented, adding that it is a difficult piece of property.

“That is a tough area because some of what is around it as well as the tough geography to build on, but is this a quality enough project to help us start turning that area around? I kind of lean towards that I believe it is," Robinson said. "This is going to bring a nice class of people into a nice facility and I think it will be a great component to helping kind of direct the future in an area that needs some help. I think that really does work for me.”

Swartz said Oxford Enterprises purchased the property solely so they could control the multifamily portion.

“Multifamily is our focus, it’s what we do, and we are very big on security and community. As I said, we don’t sell these properties so if there’s a concern about that we’re just going to fill it up and take anyone that we can, that’s not the business that we’re in because that doesn’t benefit us long term. In terms of what retail providers go up front, we’re going to be extremely picky because we don’t need the retail there to be profitable,” Swartz said. “All of our products are pristine and we are as good or better than anybody. Our fitness centers are state-of-the-art, we have resort-style swimming pools, so this is not a downgrade to what was there before. If anything, I consider it an upgrade. It’s modern and it will last the test of time.”

Cleveland was the lone vote against the motion.