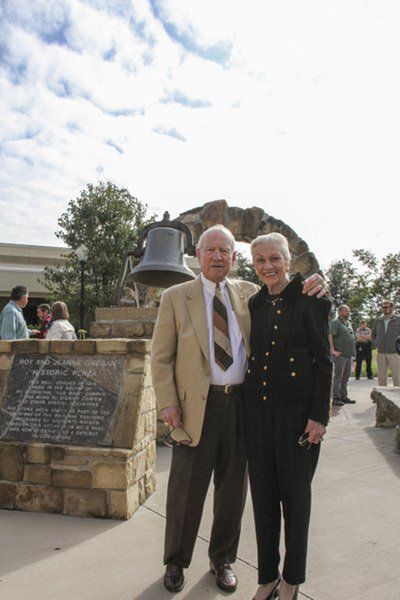 Roy and Jeanne Grogan in front of the Weatherford College plaza that is named after them. 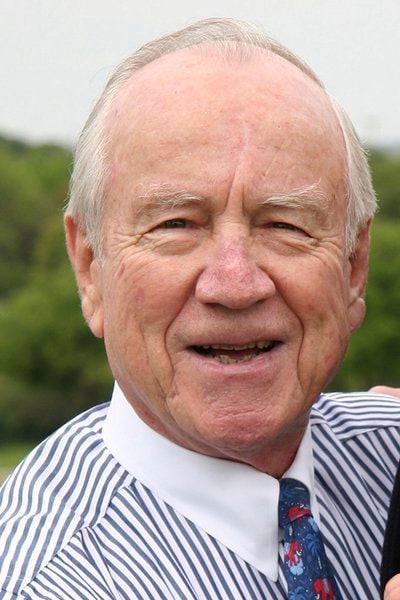 Roy and Jeanne Grogan in front of the Weatherford College plaza that is named after them.

Grogan served previously as a trustee on the Weatherford College board and was instrumental in leading the college’s move from its location on South Main Street to its current location. The move involved selling the old campus, holding a successful bond election and taking criticism from those unsure of the move.

“We had support from a lot of people,” Grogan said in a 2017 interview with WC for The Hilltop magazine. “Some people didn’t particularly want us to go out there, but others saw it in much the same way we did and supported us and the process. It turned out great. We were very proud of that and still are.”

Today, the historic plaza on the WC campus is named for Grogan and his wife Jeanne.

“We might not even be on the campus that we exist on today if it wasn’t for Roy Grogan,” WC Institutional Advancement Vice President Brent Baker said. “He was one of those visionaries that saw a bigger future for the college, and even though it was a controversial move at the time, he led that board and the college to move to where it is today, and I can’t imagine what the future of the college would’ve been if they hadn’t made that decision in the mid-1960s.”

Grogan’s family has lived in Parker County since they traveled here in a covered wagon back in 1861. Grogan himself grew up during the Great Depression and saw his father transition through multiple jobs.

“We were all poor, but we didn’t know it and everyone was happy,” Grogan said in The Hilltop article.

Grogan graduated from Weatherford High School in 1943, and after taking some college classes at WC and what is now the University of Texas at Arlington, he enlisted in the military and served during World War II.

Grogan completed his associate’s degree at WC and then studied law at Duke University. Grogan then took a job in California with the FBI’s Communist Squad to locate and talk with small, splinter groups of communists. Grogan eventually returned to Weatherford and opened his law practice with fellow lawyer and FBI employee Jack Borden.

“Roy Joe Grogan was a giant of Weatherford,” Baker said. “He accomplished so much in his life and was a very generous man. So many organizations, so much of the fabric of our community benefited not only from his generosity but his vision.”

Grogan was also a founding and honorary director for the Weatherford ISD Education Foundation. In working with WISD, he started the Project Opportunity Scholarship Foundation, which gives Weatherford High School graduates a chance to receive $5,000 to attend WC, in the early 1990s.

“Hundreds of students have been able to attend college because of Mr. Grogan’s generosity,” WISD Executive Director of Organizational Culture Charlotte LaGrone said.

Grogan and his family also donated more than $120,000 in scholarship funds to the WC Foundation over time, according to the 2017 article in The Hilltop.

LaGrone worked with Grogan on the scholarship foundation and called her working with him an honor. She said as a member of the WISD Education Foundation board of directors, Grogan always offered “sage advice.”

“Years ago, he told me to always do what I least wanted to do first each day,” LaGrone said. “Roy told me to, ‘Eat the frog. Get it done and out of the way’. He said that when you do that, the rest of your day will be great. He was right.”

Grogan’s daughter Jeaneane Grogan Milton described her father as a kind man who set an example of “how to live a life that has meaning to those around us.” Grogan Milton recalled the lessons her father taught her.

“How to be charitable quietly. How to love and share joy with each other on a daily basis. That gratitude is everything. Treat people with kindness, no matter what. That respect is earned, never given lightly. Discipline is sometimes hard but is always required. You have to learn that the world is not always black and white … there is sometimes gray if you pay attention,” Grogan Milton said. “The joy I saw on his face at every Project Opportunity luncheon when they awarded scholarships. But I would say, above all, that family is everything.”

In 2006, Grogan was honored by WISD as a distinguished alumnus for his successful career and positive community contributions, LaGrone said.

Baker hopes that Grogan’s legacy can be honored by the public once the coronavirus situation ends.

“This town needs to be able to gather and celebrate Roy Grogan at some point,” Baker said.