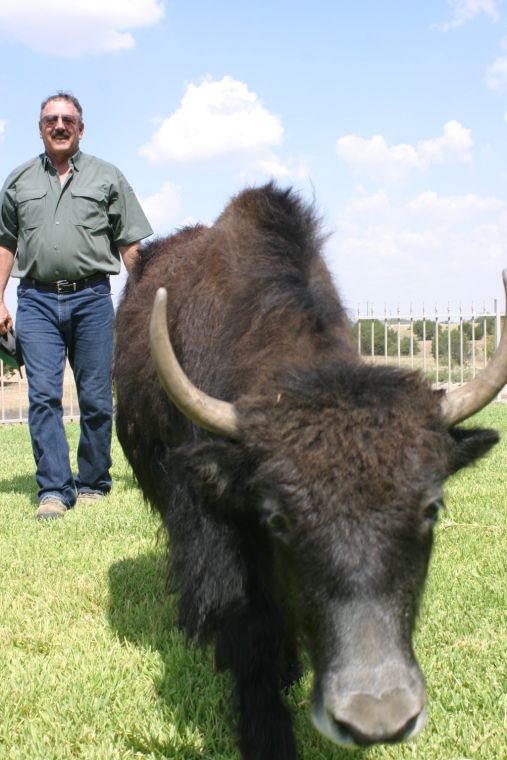 A young yak gets curious about the camera at Bob Payne’s ranch off Peaster Highway. 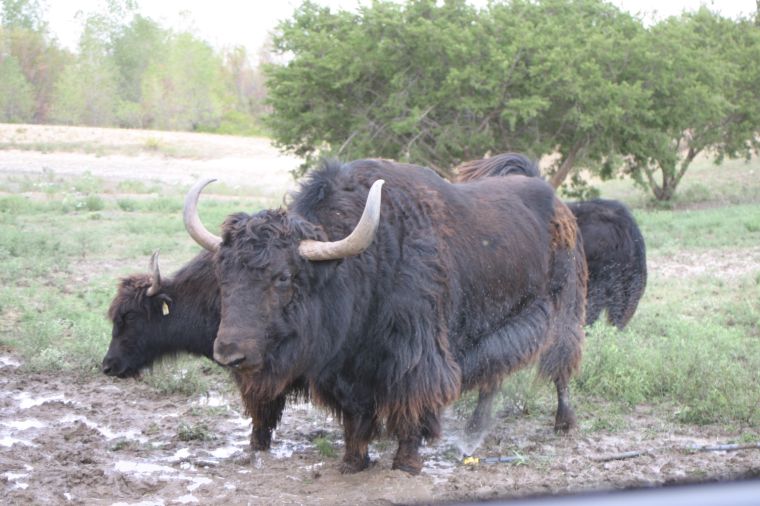 Yaks stay cool under the sprinklers at Bob Payne’s ranch off Peaster Highway. 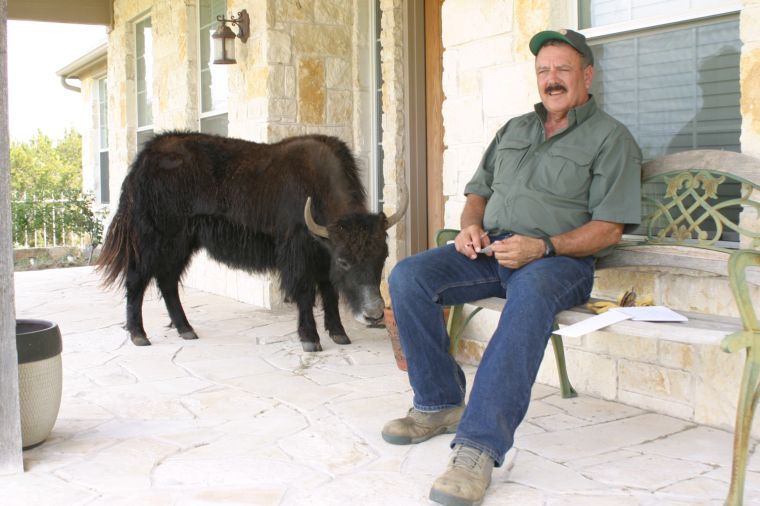 Robert Payne, of Texas Yaks, shares his porch with a friend. The yaks are not treated as pets, Payne said, but they are docile and will eat out of his hand.

A young yak gets curious about the camera at Bob Payne’s ranch off Peaster Highway.

Yaks stay cool under the sprinklers at Bob Payne’s ranch off Peaster Highway.

Robert Payne, of Texas Yaks, shares his porch with a friend. The yaks are not treated as pets, Payne said, but they are docile and will eat out of his hand.

When Parker County resident Bob Payne moved back to Texas from Spokane in 2001, he packed his yaks.

Four of them, including a bull.

“I knew folks in Northern Idaho who raised them,” Payne explained. “I knew it was an emerging market — they are known for their lean, low-cholesterol meat.”

Growing up on a farm in the Austin area, where his family raised livestock and grew cotton and milo, Payne was eager to get back to his roots.

So instead of raising yaks in Colorado, Minnesota or Washington — as some do­ ­— he headed for warmer climes.

Payne found a home for his unusual herd on a 300-acre ranch off Peaster Highway and hoped that the cold-hardy animals would acclimate to the sunny South.

In the past 10 years, while employed full-time by the Federal Aviation Administration, Payne has grown his herd of exotic bovines from four to 50 and developed a market for their meat in two Austin restaurants.

He has made it work.

But he will tell you that there have been a few bumps along the way.

For a yak, Payne said, anything above 50 degrees is warm.

So the unrelenting Texas heat was a big factor — hitting young calves hard — and Payne discovered an unexpected susceptibility to pneumonia, for which he now vaccinates.

“The mamma cow gets restless in the heat, and the calf overheats trying to keep up with her,” he said. “Their body temperature rises from 101 degrees to 105. They can die in 30 minutes.”

Last November, a drought tolerant plant that cattle normally avoid proved toxic to many animals. Yaks went down and couldn’t get up after eating the plant, known as twin leaf senna. They ate and drank and were “alert downers,” Payne said, but their muscles deteriorated over time.

Payne has navigated his way through the crises with the help of Aledo Animal Clinic, Texas A&M University, and Dupont Chemical, which formulated an herbicide to dispatch the plant.

He has adjusted his breeding program so calves won’t be born in the summer heat, and he clips the bellies of mamma cows to prevent calves from being surrounded by a blanket of hair when they suckle.

Water has been key to caring for the 600 to 800 pound animals, Payne said.

Yaks gravitate to two stock tanks when they need relief from the heat, he said, or stand blissfully in sprinklers set up near Payne’s home, taking turns with surprising docility.

The animals require no special fencing or equipment, he said.

“The only time [you have to be careful] is when the cows have babies,” he said, “or sometimes the bulls get anxious. But the cows will eat apples out of your hand.”

The yaks are primarily grass-fed, Payne said. The animals graze at night, to avoid the sun, and always have access to high protein hay.

Steers, aged 2 to 4 years, are harvested on demand when the six freezers in his garage ­run low.

Hamilton’s Meat Market handles the slaughter and processing, he said, yielding USDA inspected meat that tastes like beef, but is lower in fat.

“There’s a market out there,” he said. “Everyone I’ve sold it to likes it.”

Most of his meat sales, Payne said, are to individuals, but “there are a few farmers’ markets here and there.”

He will sell a whole or half animal for about $2 per pound liveweight, he said. Yaks dress out at about 60 percent of their body weight, he said, a little less than cattle.

He does not sell breeding stock, he said, out of concern for the care of the animals.

Payne is on the board of directors for the International Yak Association, which promotes awareness of the animals.

Yaks have not been introduced at the Fort Worth Stock Show, he said, because producers go to a show in Denver that is held at the same time.

“But we’ll get there sometime,” he said.