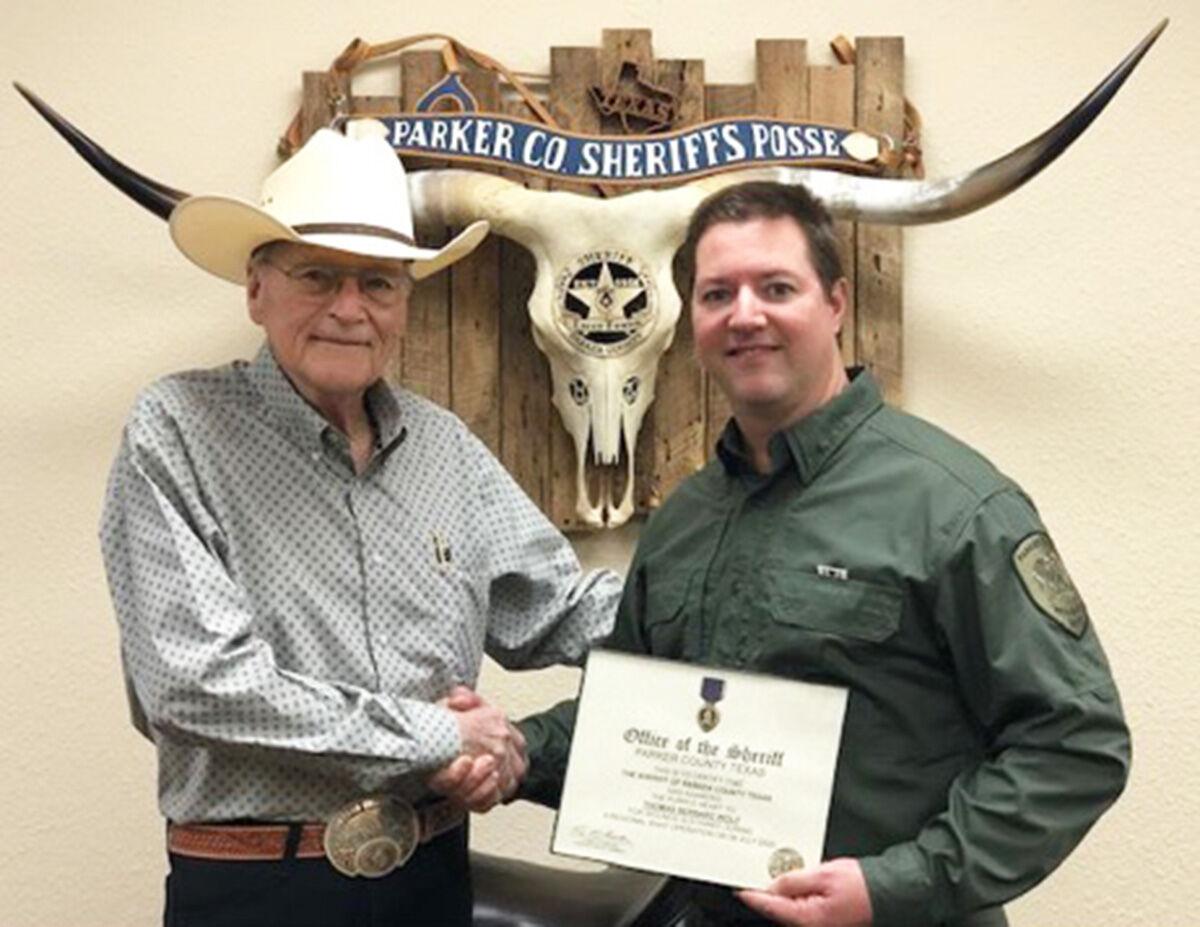 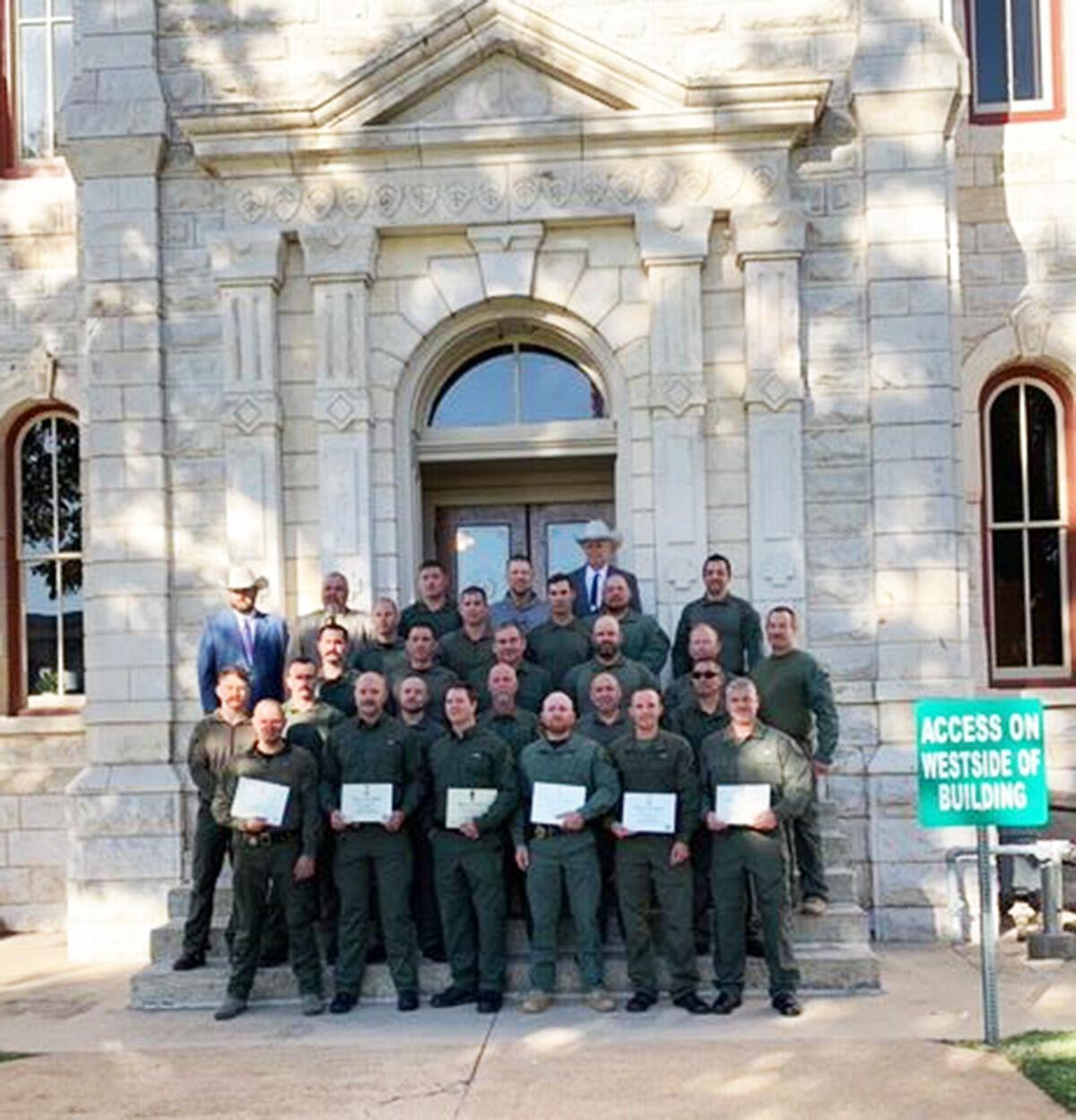 Members of the Parker County Regional SWAT team were recognized  Tuesday by Parker County Commissioners for their valiant efforts during a Reno shooting in July.

Members of the Parker County Regional SWAT team were recognized  Tuesday by Parker County Commissioners for their valiant efforts during a Reno shooting in July.

Wolf was shot multiple times during a Special Weapons and Tactic  operation on July 9, 2020. During the incident, sheriff’s deputies were called to respond to a domestic disturbance at a residence in the 800 block of Harris Road in Reno. The incident escalated to an armed suspect, who had shot at and injured two Reno police officers.

Wolf was tasked with securing the scene perimeter and was ambushed by the suspect from an unknown location while moving into his position in a heavily wooded area. Wolf was shot at multiple times, sustaining multiple gunshot wounds to the chest, waist and hand. Body armor and protective gear prevented Wolf from sustaining further internal injuries to the chest and head.

Wolf radioed to his commander of his position and injuries, while he crawled out of a creek bed, through the wooded area, to the edge of a field where the SWAT rescue team was able to extract him and render emergency aid. Paramedics transported Wolf to a Fort Worth hospital by air where he was treated.

Wolf said he was deeply honored to receive the award.

“I’m really proud of how my teammates worked as a unit that day along with additional law enforcement agencies who also responded,” Wolf said Tuesday after an emotional presentation in commissioners court.

Parker County Sheriff Larry Fowler said he is very proud to have Wolf on the Parker County Regional SWAT Team.

“Deputy Wolf is a valued patrol deputy,” Fowler said. “He is well-respected by his peers and is an incredible asset to our SWAT Team. We are glad he was able to remain focused under gunfire and was able to remain calm. We are certainly glad that he is alive-and-well, and is projected to make a full recovery. Deputy Wolf is expected to be back on patrol and SWAT soon.”

Fowler added he is exceedingly proud of the Parker County Regional SWAT members who ran toward the gunfire during the incident.

“Not one of our officers turned away. I’m very proud of the way they train extensively, which was displayed during this call, and every call-out. This is a group of extremely dedicated law enforcement officers,” he said.

"With disregard for their own well-being and having no certainty for the whereabouts of the shooter, the team demonstrated great courage during the extraction," Authier said. "Their acts of selflessness were in keeping with the highest traditions of law enforcement service and reflect great credit upon themselves and their respective agencies."

"The best thing about this team is not only their capabilities and how much they train and how much they care for this county and community, but that as all these members were being read out, you heard the sheriff's office, Springtown Police Department, Weatherford Fire Department, Weatherford police and LifeCare EMS," Weatherford Police Chief Lance Arnold said. "That is just another great example of how in Parker County public safety is a priority and we have a lot of different entities that collaborate to ensure that we provide the best level of service of public safety for our community as we can."