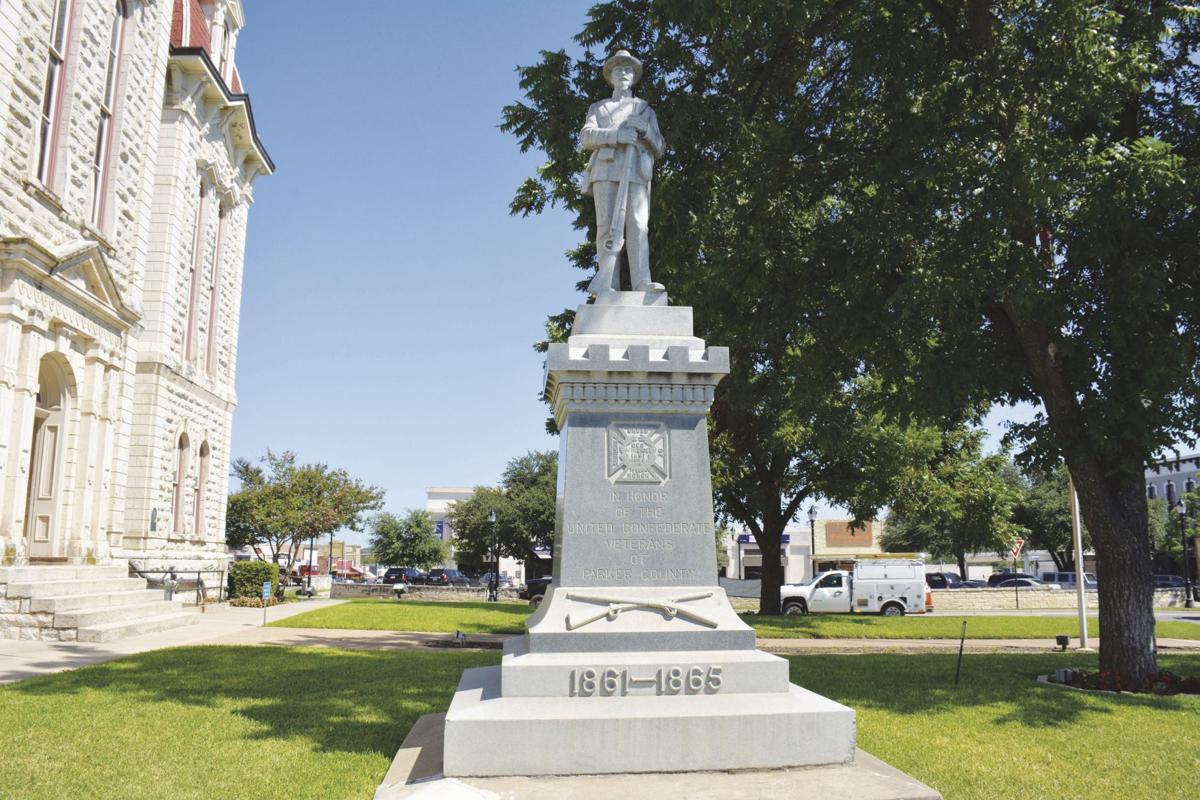 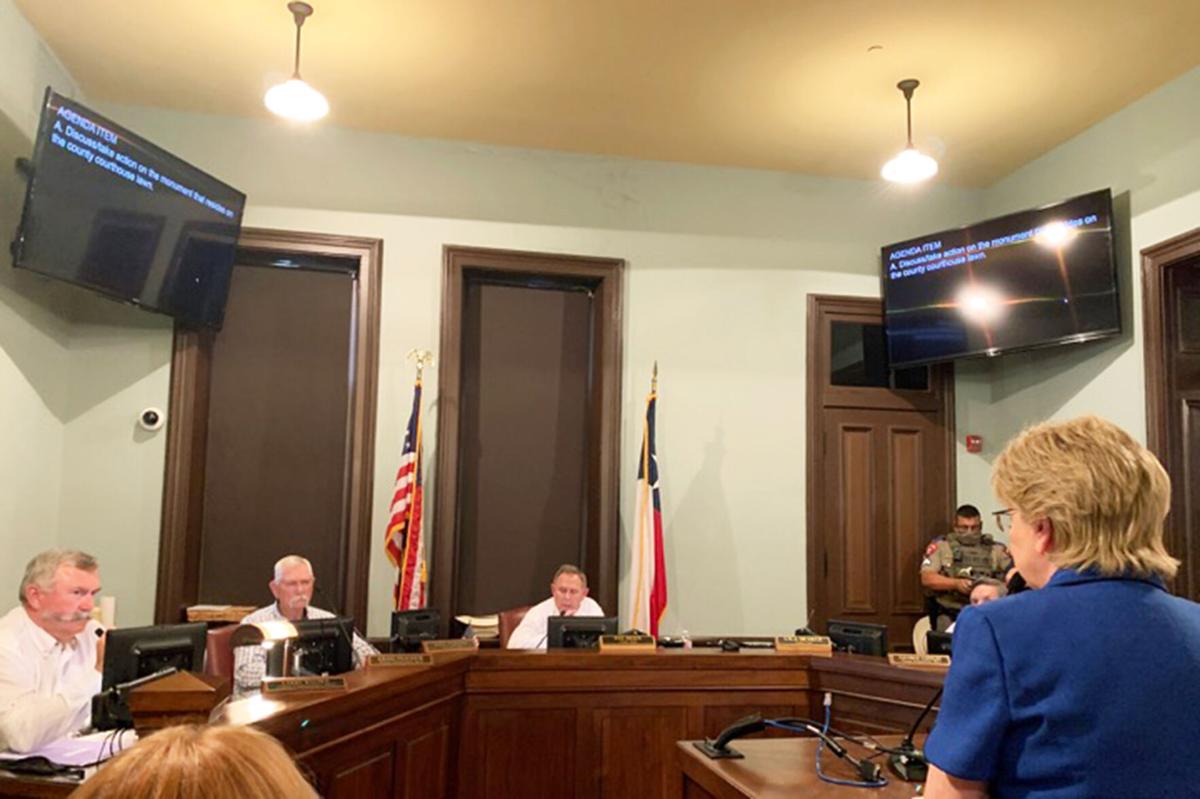 A Confederate statue that has been a major point of contention between Weatherford and Parker County residents the past few weeks will remain in place after county commissioners voted unanimously Thursday to leave it where it is on the courthouse lawn.

Precinct 1 Commissioner George Conley made the motion to keep the statue in its place.

“That statue honors the dead, it doesn’t honor the Confederacy,” Conley said. “I’m going to make a motion that we leave the monument where it has been for over 100 years and get on with whatever happens after that.”

The motion was seconded by Precinct 3 Commissioner Larry Walden and then unanimously approved.

“It represents our history, it represents those that have died in war on both sides,” County Judge Pat Deen said. “It represents a time in our history that no longer exists today, thankfully. If we look at what the constituents want here, I can speak for myself, that there’s been an overwhelming number to not remove that statue.”

Large protests for and against the removal of the statue took place on July 25.

“This past Saturday there was an event that took place on the courthouse lawn that escalated to a point that involved multiple law enforcement agencies and actually was stopped for an illegal gathering because of the safety factor to the community and the law enforcement agencies who were here,” Deen said. “What happened Saturday is not who Parker County is, it’s not who Weatherford is and that has to come to an end, that has to stop.”

The commissioners met on June 22 to discuss the removal of the statue; however, no action was taken after the statue’s ownership came into question. The commissioners received a letter from the local chapter of the United Daughters of the Confederacy asking that the statue be relocated. But according to the Texas division of the UDC, it was not the Weatherford chapter’s call.

Although the county is not the owner of the statue, Texas United Daughters of the Confederacy President Dorothy Norred said their organization would not move the statue unless a vote from the commissioners court told her to do so.

Norred said she received numerous messages from residents wanting to keep the statue on the courthouse lawn, adding that she doesn’t want to see anyone get hurt or the statue get damaged.

Deen addressed Tuesday night’s Weatherford City Council meeting where Mayor Paul Paschall and the council asked the county to put a specific date on removal of the statue.

“What Weatherford’s position was makes it very difficult for us because we don’t own the statue. We did go through from 1903 through about 1940 to validate the fact that we don’t own the statue. It is owned by the daughters of the confederacy at the state level, their charter,” Deen said. “It has been on our courthouse lawn for about 100 years. I know there is some sensitivity in the community — strong feelings for and against.”

Paschall issued a statement Thursday after the vote.

“The commissioners’ court has made their decision and we recognize their position. We will work together to protect the citizens, businesses and public safety community of Weatherford and Parker County,” Paschall said. “All parties involved care deeply for this community and we all want the very best.

“On rare occasions, we have different opinions in strategy related to accomplishing goals. Don’t confuse that for a lack of overall willingness to work together in protecting this community.”

A member of the Progressives of Parker County, the group organizing the protests to remove the monument, was left reeling after the commissioners voted.

“What happened is a travesty,” said Tony Crawford, a longtime Weatherford resident. “This is a deep-seated thing we’ve touched on in Weatherford. We need to take a deep breath and regroup.”

Crawford said he doubted claims by Deen and other commissioners that an overwhelming number of calls from constituents drove the unanimous vote, and said he suspects many of those calls came from right-wing groups fighting to keep the statue.

If the Progressives hold another protest — none are planned at this time — Crawford said he expects a similarly strong reaction from counter-protesters and another weak reaction from local officials and police.

“I feel like [the counter-protestors] were rewarded for Saturday,” he said. “Under no circumstances am I letting anyone from the Texas Patriots or the Texas Freedom Fighters think that they ran me out of my hometown,” Crawford said.

Despite the commissioners’ vote, Crawford said he believes in his hometown and the people’s hearts who live here, adding that there are good people around now like there were more than 150 years ago when two of his relatives were lynched on the courthouse lawn not far from where the statue resides.

“When we found the newspaper clipping on our ancestors being lynched, one of the things that stuck out to me in that news clipping was it said that the hanging of my ancestors set neighbor against neighbor, which means Weatherford always had some good people,” he said. “They were just outnumbered by people whose ideology is wrong, and it still is today in this community.”

Jeff Prince contributed to this report.