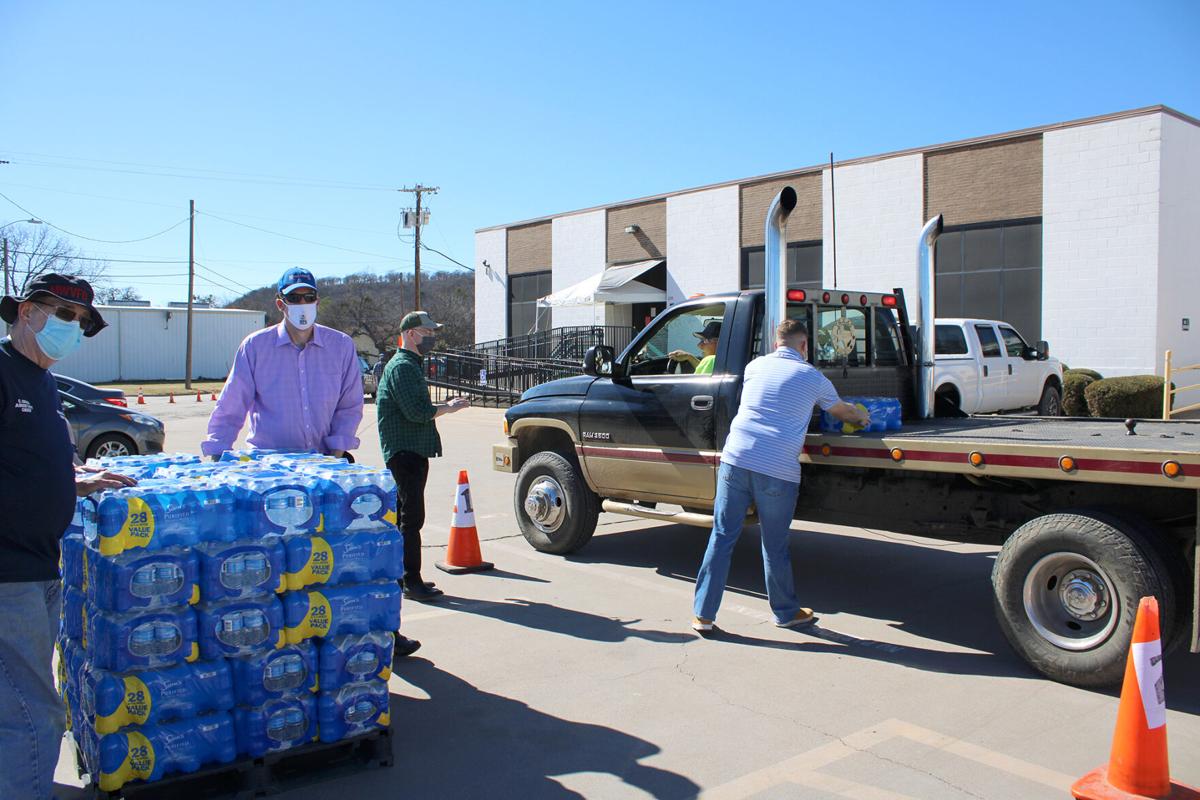 Volunteers load a pickup truck with cases of bottled water at one of the distribution sites in Mineral Wells on Tuesday, Feb. 23. 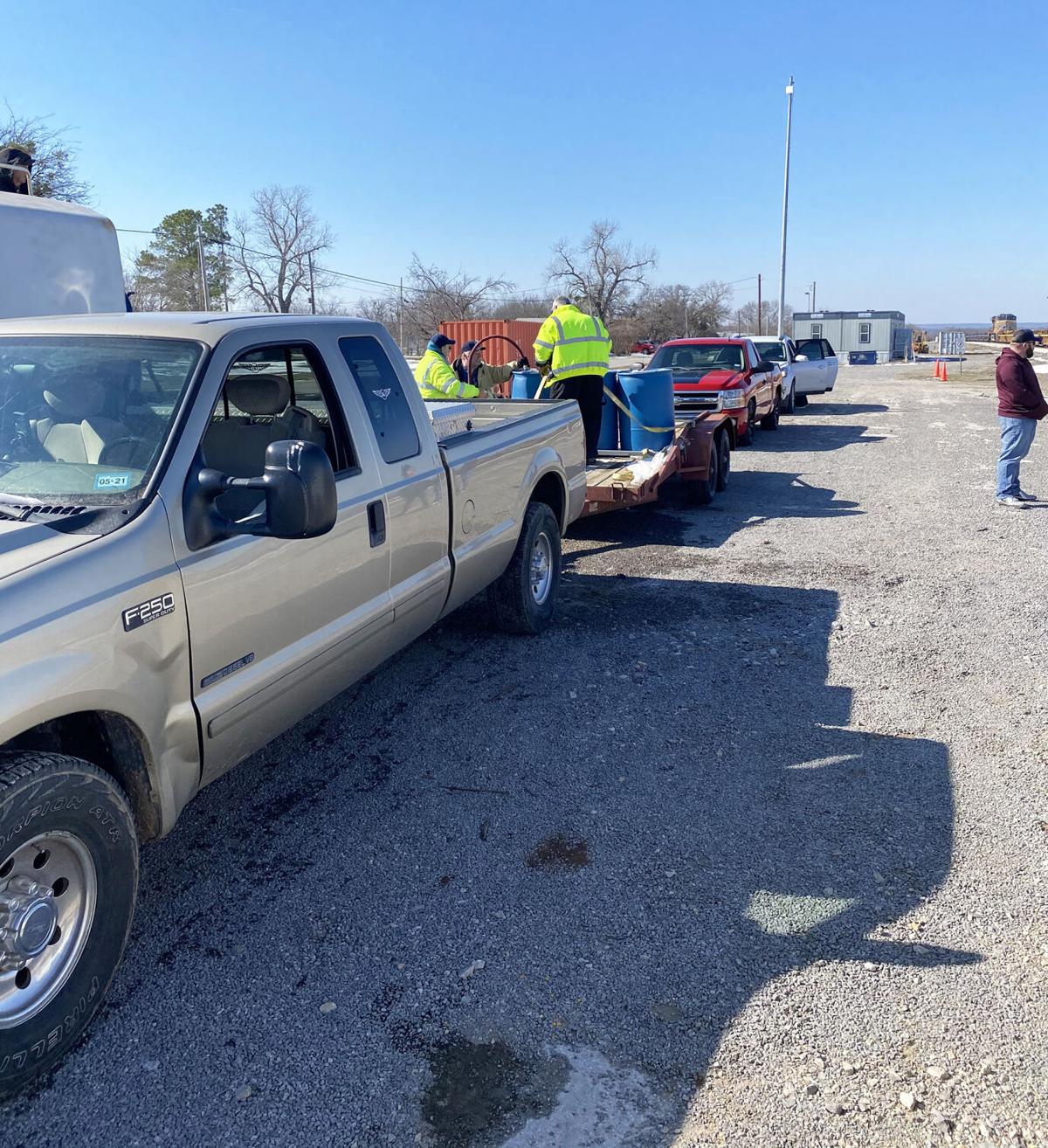 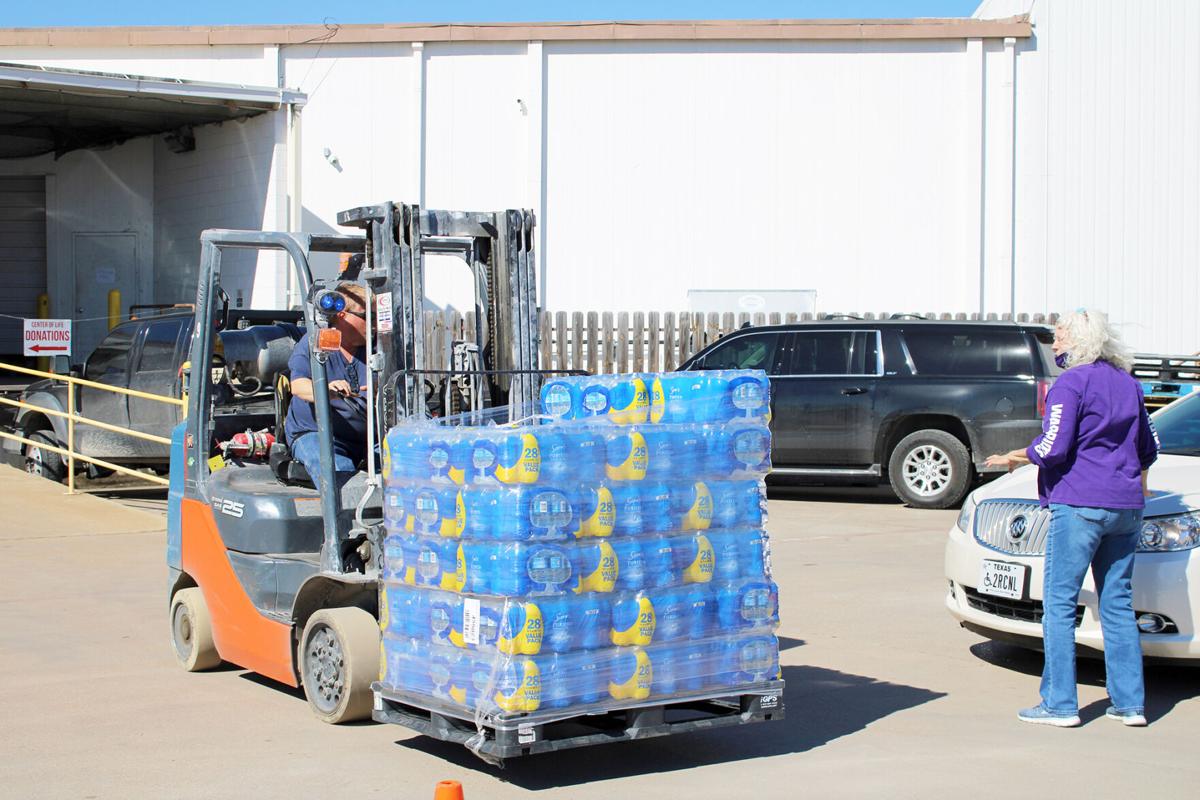 From left, AJ Assembly owner Bubba Lusk and Center of Life Executive Cindy Maness helped coordinate and setup for the water distribution held in their parking lot in Mineral Wells this week. 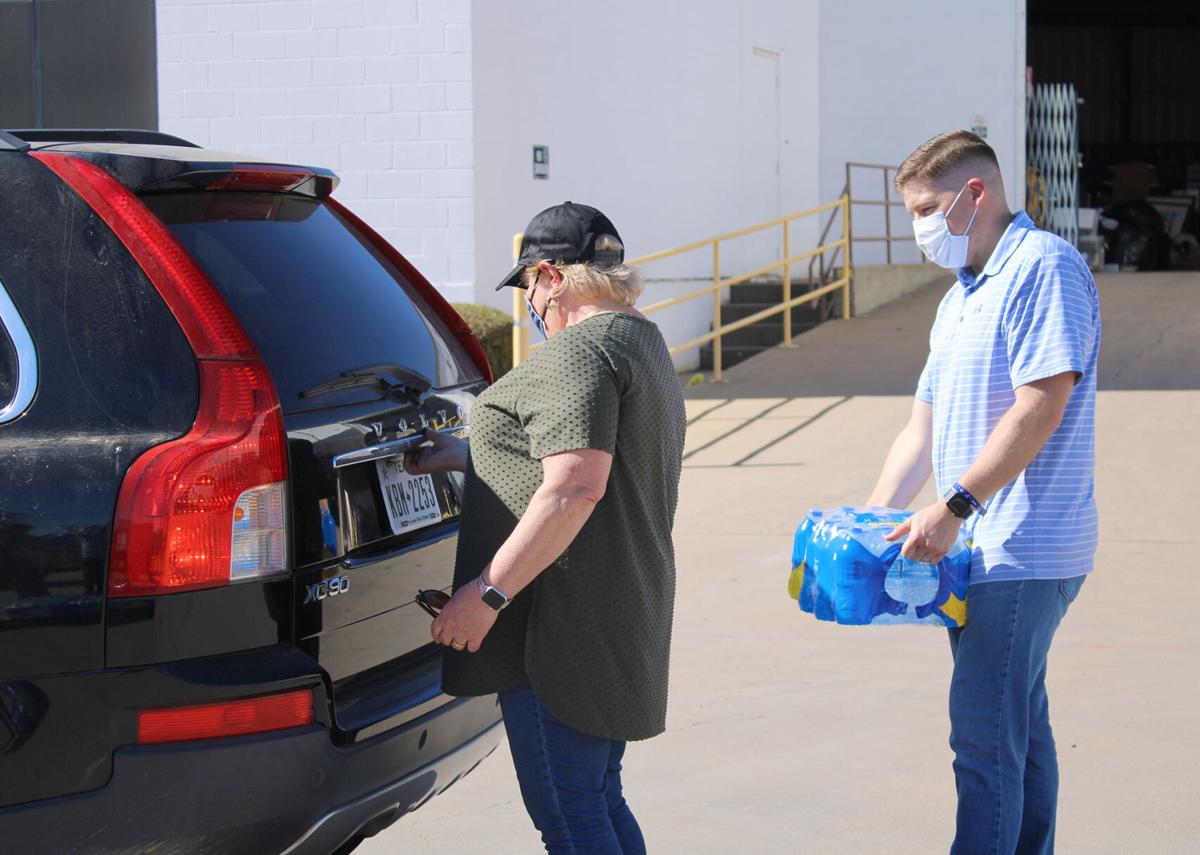 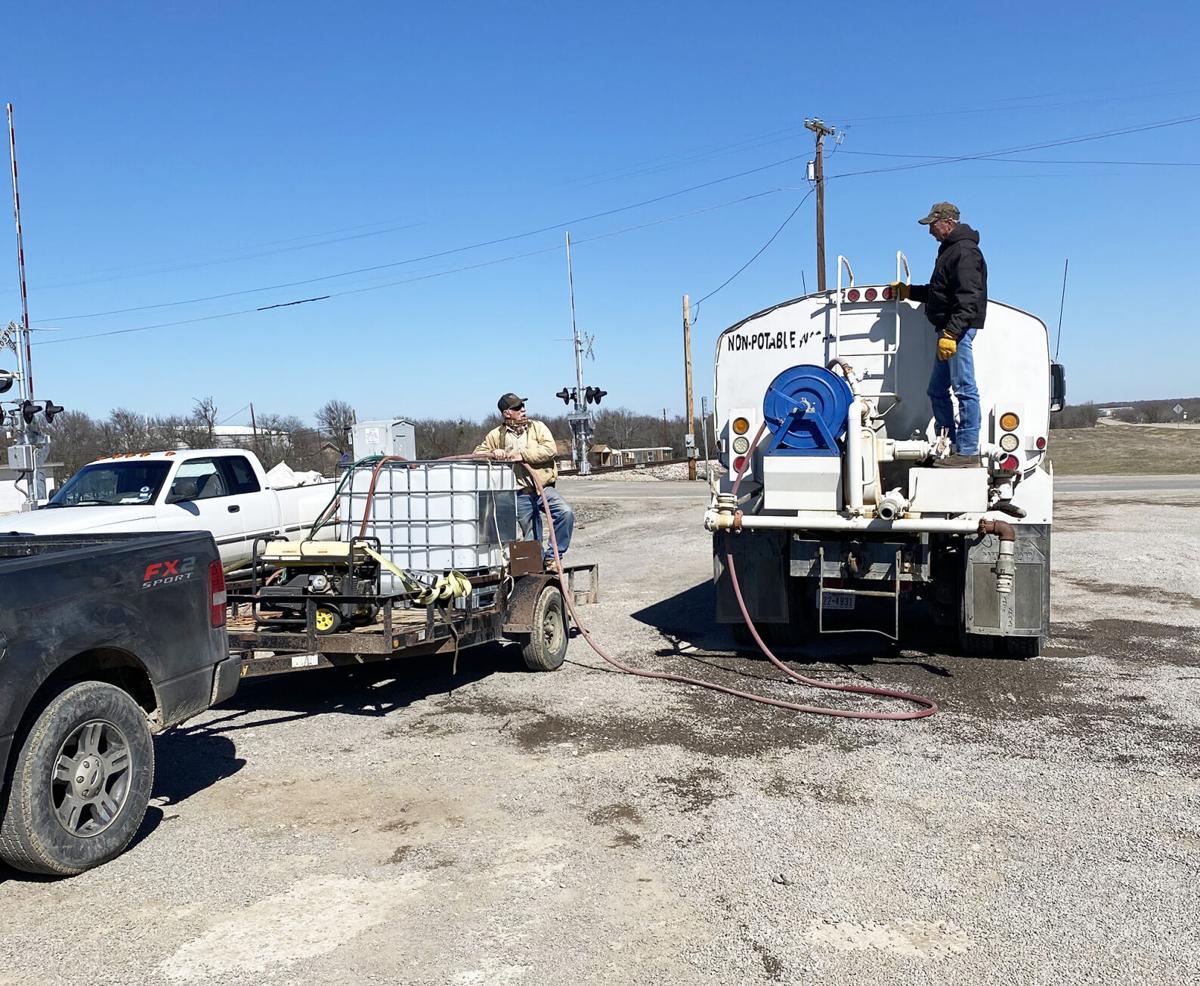 Crews get prepared to pump non-potable water to Precinct 3 residents in Millsap.

Volunteers load a pickup truck with cases of bottled water at one of the distribution sites in Mineral Wells on Tuesday, Feb. 23.

From left, AJ Assembly owner Bubba Lusk and Center of Life Executive Cindy Maness helped coordinate and setup for the water distribution held in their parking lot in Mineral Wells this week.

Crews get prepared to pump non-potable water to Precinct 3 residents in Millsap.

Jennifer Wycoff went six days — many of those in pitch-black darkness — without running water in her home.

Her water was restored Saturday, Feb. 20. That's when she and her husband discovered a break in one of the main water lines that feeds into their home.

"We cut [the supply] off at the road, but there was so much pressure coming through the lines that it was still coming out," Wycoff said. "So here we are, I'm afraid we're going to have a humongous water bill because the water won't stay off."

The Palo Pinto County resident is one of many still dealing with the aftermath of last week's winter storms.

"I had to go out and buy more water [Wednesday]," said Wycoff, who lives outside of Mineral Wells city limits.

Her water operator, North Rural Water Supply, is a wholesaler of the city of Mineral Wells, which suffered several main breaks, meaning the city had to shut off its water supply to residents. The city lifted its boil water notice  Friday afternoon after receiving its new water pump, which was expected to return functions back to normal.

Wycoff is one of 1.4 million in Texas who still faced water issues this week and one of more than 20,000 without running water. The Texas Commission on Environmental Quality said more than 1,180 public water systems in 160 counties were impacted by the storm.

Ahead of the freeze, Wycoff left her faucets dripping. On Feb. 15, her home lost all of its water supply — a day before they received a notice that it would be cut off.

"That would have been fine and dandy if we were notified ahead of time and they said, 'Hey, take this time to get as much water as you can because we're going to be cutting off the water at this time," Wycoff said. "At 8 a.m. the next morning we went out to several stores and there was no water anywhere."

The family was able to get a couple of cases of water from one of the city's distribution sites, and found a filling station in Weatherford to fill up two five-gallon containers.

On Thursday, a student housing complex outside Sam Houston State University sent out a notice to residents that it would be providing water barrels, paper plates and plasticware to units that still have no running water.

Huntsville officially shut off its water Tuesday, Feb. 16. Water has been restored now, but Arbors of Sam Houston is still dealing with pipe breaks and flooding issues.

A shower trailer, one for men and one for women, was delivered but not installed until Friday. Even then, the complex said the shower stalls would be cleaned daily but not disinfected.

"Please use at your own risk," according to the notice.

Cleaning up the mess

With pipe issues all over the state, plumbers — and supplies — are a hot commodity.

Justin Floyd, with Liberty Plumbing in Huntsville, has taken more than 6,000 phone calls in a week's span, restoring water at an average of 35 homes a day.

“We’re not necessarily repairing all of the problems at once, we’re trying to get people at least a functional bathroom and kitchen with water,” Floyd said. "We're working 16-20 hours a day focusing on getting people's water back."

Rodney Turner, who owns Drainco, has had to shift his focus from his main gig — drain cleaning — to plumbing because of the demand.

“I’m just trying to get everybody’s water on that I can quickly first,” he said.

Most problems have come from where pipes enter the house, especially in the attic, but they’re easy fixes that can be done in a little over an hour. Last Saturday, he did nine in one day.

In Gainesville, due north of Dallas along the Texas-Oklahoma border, the city water system narrowly avoided a boil water notice by asking residents to conserve water – and, for one period of four hours, not to use any water at all – to allow pumps to refill city storage tanks without dropping city water pressure too low. However, one of the biggest challenges the city faced was uncontrollable water loss from burst pipes.

“It was an odd sound,” Jeff recalled. “So I walked back there to look and there was just water shooting out all over the place, and it was just, like, not good.”

Jeff, a former plumber and U.S. Navy veteran, ran upstairs for tools, calling to his wife Maggie to help.

“He says ‘all hands on deck,’ and I go, what’s the matter?” Maggie recalled.

As Jeff returned to the main floor, he rushed past a customer who happened to stop in just then to pick up an order. The customer pitched in and the three did what they could to divert the gushing water out the back of the building, ultimately creating a sort of chute.

“I’m running around the back yard, I’m looking for a shop vac hose, PVC pipe, electrical conduit, and we jerry-rigged this thing to go out the back door,” Jeff said.

The Bradseths managed to avoid serious damage in their building and sent their customer home with a new pair of socks to replace ones he’d soaked in the ordeal. Jeff repaired the breaks the next day, once he was able to find fittings that would work. He said area stores were sold out of most plumbing supplies.

Turner stocked up on materials he anticipated needing before the storm hit, in preparation for the repairs he knew would be needed afterwards.

“I’m in good shape so far, but Home Depot, the shelves have been cleared [for a week],” Turner said.

Some cities are also looking to help by temporarily waiving plumbing permitting and inspection fees or expediting permit applications related with damage associated to the recent storm.

Demand since the storms has been “through the roof,” says Dustin Babin, manager of Coburn Supply Company in Huntsville.

“We’ve tripled volume out of this branch and it’s been from the time we get here at 7 a.m. until the time we close at 4 p.m. It’s non-stop,” he said.

'The state failed us'

The Texas Public Utility Commission, which oversees the state's electric and water utilities, and the Electric Reliability Council of Texas, which operates the power grid that spans most of the state, have come under fire for their handling of last week's events.

Texas’ power grid was 4 minutes and 37 seconds away from a catastrophic failure that could have left Texans in the dark for months, officials with ERCOT said.

Yet multiple reports have surfaced that Texas regulators and lawmakers knew about the state power grid’s vulnerabilities for years.

"The state knew for over a week, almost two weeks in advance, that this weather was coming, and what did they do to prepare for it? Absolutely nothing," Wycoff said. "I bet all their homes had power. I bet all their homes were warm. I bet the governor's mansion never lost power."

More than 4.5 million customers in Texas were without power at one point last week.

Wycoff said she and her family, including her 17-year-old daughter who is autistic and battles bipolar disorder, found themselves huddled around their woodburning stove, with the room blocked off to keep the heat in.

She said the blame lies with whoever runs the electrical part, noting that they need to pay the repercussions for what happened.

Six board members of ERCOT announced their resignations this week and state lawmakers have announced that the reform of ERCOT is one of their top priorities during this legislative session.

On Thursday, key committees in both chambers of the Texas Legislature met to discuss what went wrong with the state's power infrastructure during last week's storm.

It's of little solace for Wycoff, who now awaits word from the Federal Emergency Management Agency on her application for assistance that she filed Wednesday.

"They are supposed to keep my family safe and they did not do that — the state failed us," she said. "I'm trying to work full time, raising my special needs kiddo and I've got health issues of my own.

"How much more is the state going to make me suffer?"