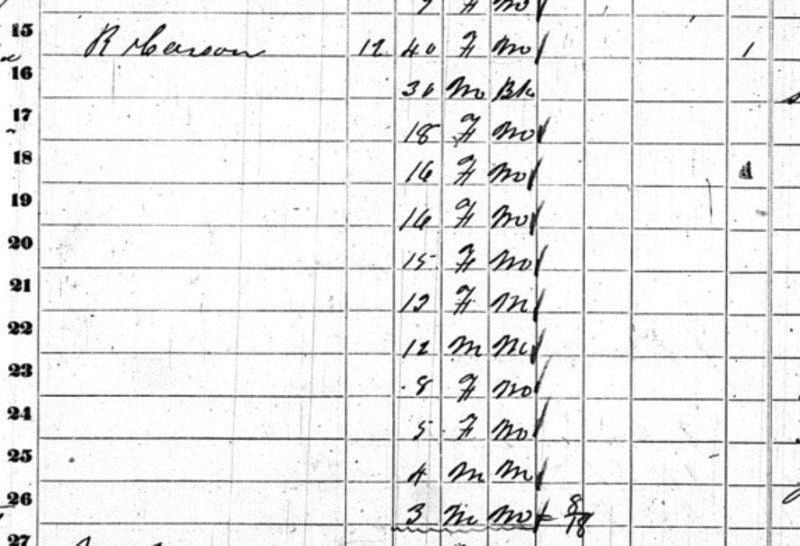 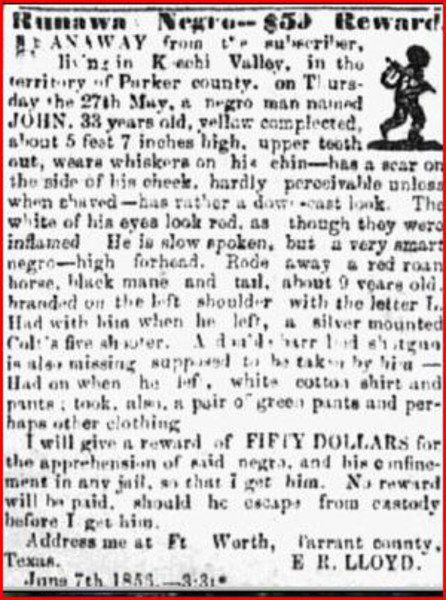 While never the majority of the population, slaves and slave owners participated in the foundation of Weatherford and Parker County. Slave owners disproportionately owned more land, horses, cattle, and occupied more governing jobs than those who did not own slaves.

The full number of enslaved men, women, and children in Parker County may never be known, however, a good estimate is possible. County officials collected property taxes every year, and slaves, listed as Negroes, were a taxable property. From 1856, the first year Parker County�s taxes were collected, to 1864, the last year this county collected the slave tax, the number of slaves increased from 156, valued at $78,000 (adjusted for 2019 inflation, $2.3 million), to 384, valued at $253,100 ($4.2 million). These numbers may not include the 498 slaves who were sold, rented out of the county, died, or whose owners moved away during those years, and whose estimated value was almost $300,000 ($5 million). Without the Bills of Sale, which recorded the transfer of human property from one owner to another, it is impossible to know how many of those slaves were sold to other Parker County residents.

Parker County historians have consistently ignored the topic of slavery in their publications, erroneously leading to the common belief that slavery played no part in the county history. Due to the fiery destruction of three courthouses, burned records can be blamed for some of this omission, but not all. Incidentally, the one document that survived left instructions from J.L. Edwards to his newly widowed wife, to sell their “negro boy” at the public sale at the courthouse on May 1, 1860. Purchased for $700, he was now valued at $1,400 and the proceeds would help repay the money he owed her for the initial purchase. This surviving document alone corroborates the active participation of slave holding and sales in the county.

One of the early history books, History of Parker County and the Double Log Cabin (1937), was authored by then mayor of Weatherford, Gustavus “Gus” A. Holland. Genareo Holland, his wife, was a charter member of the Sam W. T. Lanham United Daughters of the Confederacy (UDC) chapter in Weatherford (est. 1903), and among many other tasks, served as the chairwoman of the committee to have the monument of a Confederate soldier erected on the courthouse lawn. Holland, whose approach mirrors his wife’s, misleadingly wrote “of the 800 men from Parker County who joined the Confederate army, perhaps not one was a slave owner. With them the question of slavery was not so much an issue as state rights, and for that they fought.” Pension records for Confederate veterans in Parker County show that many of the 655 applications were from former slave owners, including Charles Jordan, Weatherford’s second mayor, who owned a forty-year-old man, a woman, aged thirty-six, and a girl who was ten-years-old in 1860.

Throughout the nine years before the end of the Civil War many of Parker County’s most well-known citizens were some of the 384 men and women who owned slaves from 1856 to 1864. These include John R. Baylor, J. W. Blackwell, Robert Carson, J. R. Couts, Frank Carter, Joel W. Curtis, R. Eddleman, B.L. Ham, Milton and Isabella Ikard, Oliver Loving, Calvin Lynch, Alfred Obenchain, Fuller Millsap, Jno Parker, Alexander Pickard, Silas Smith, and Joseph Ward. All of these men benefitted from the enslaved labor they commanded.

One-hundred-and-fifty-five years later, descendants of Monroe Bell, Ed and John Cass, Jack and Gabe Crawford, George Dawson, Isaac George, Willis Pickard and many of the other freedmen and women, live in Parker County. They are all involved in the discussion to remove the UDC soldier from the courthouse lawn, where their ancestors were hanged, bought, and sold by the founding families.

Dr. Deborah Liles is an assistant professor and W.K. Gordon Chair of Texas History for Tarleton State University, as well as an award-winning author who writes about slavery, livestock and women’s history in Texas.