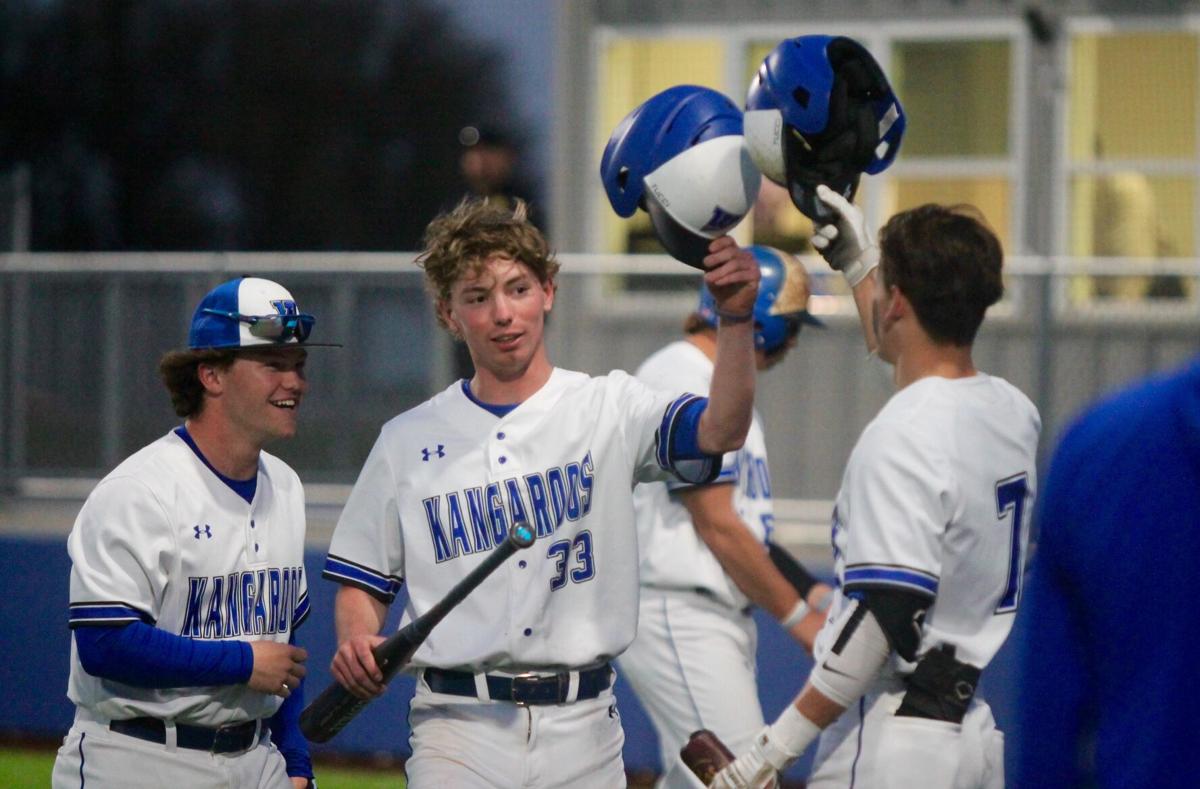 Kaden Kerbow, center, accepts congratulations from teammates after hitting a double, stealing third base and scoring against Haltom on Tuesday. 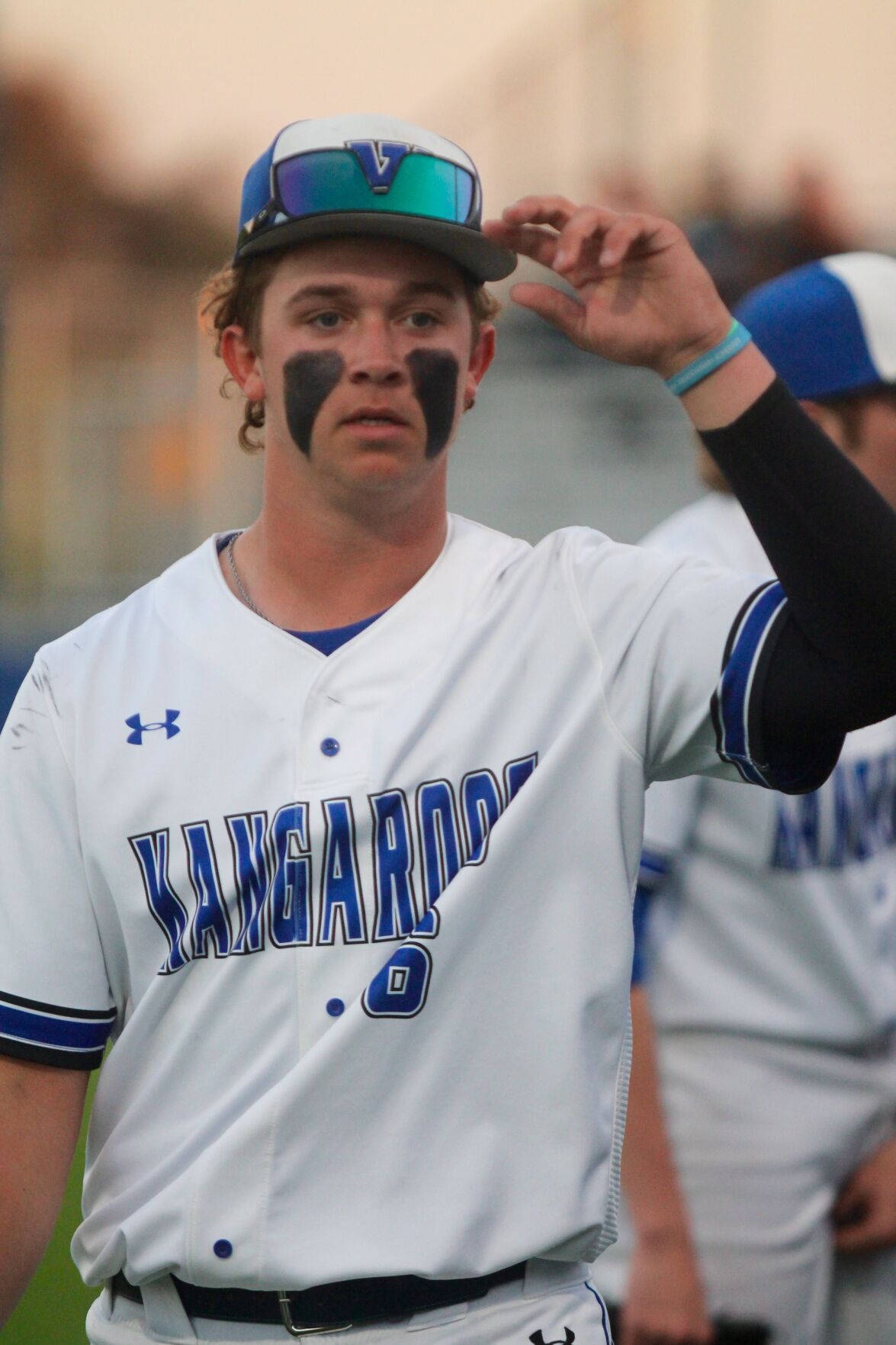 Dayton Tockey pitched scoreless relief for the Roos to close out the game. 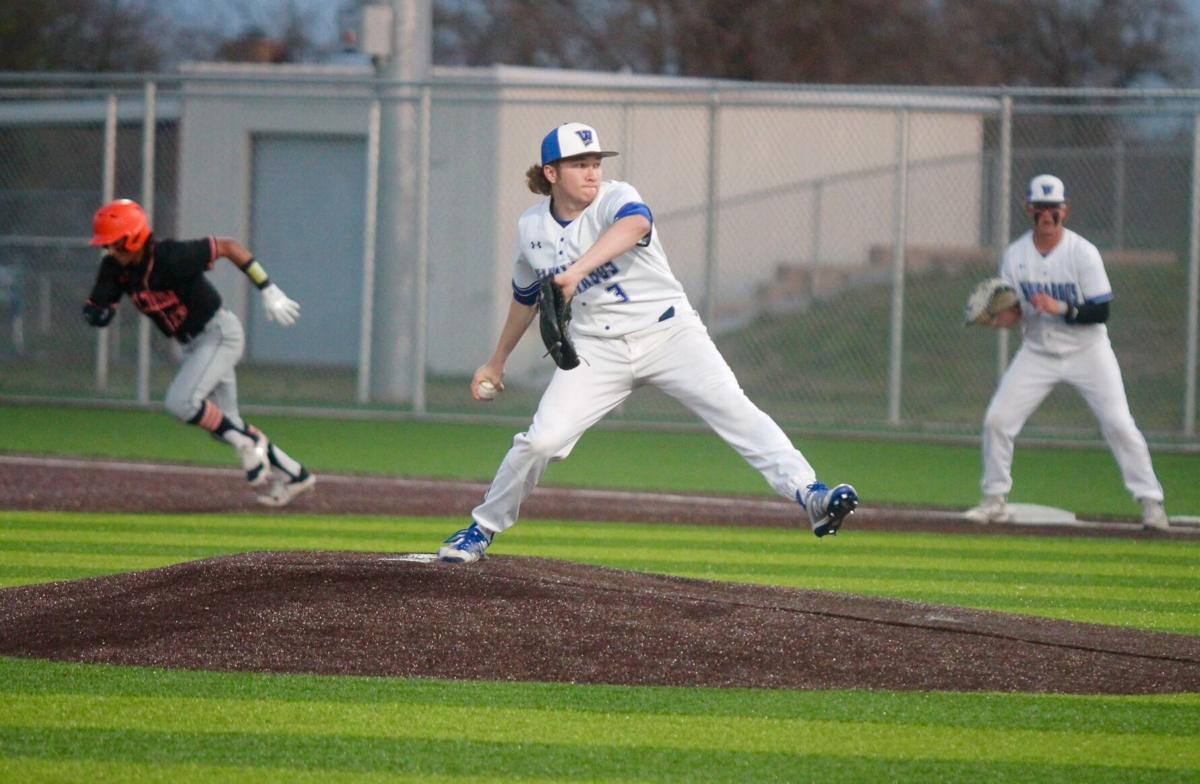 A Haltom runner heads for second base as Hudson Stark prepares to let loose with a pitch. 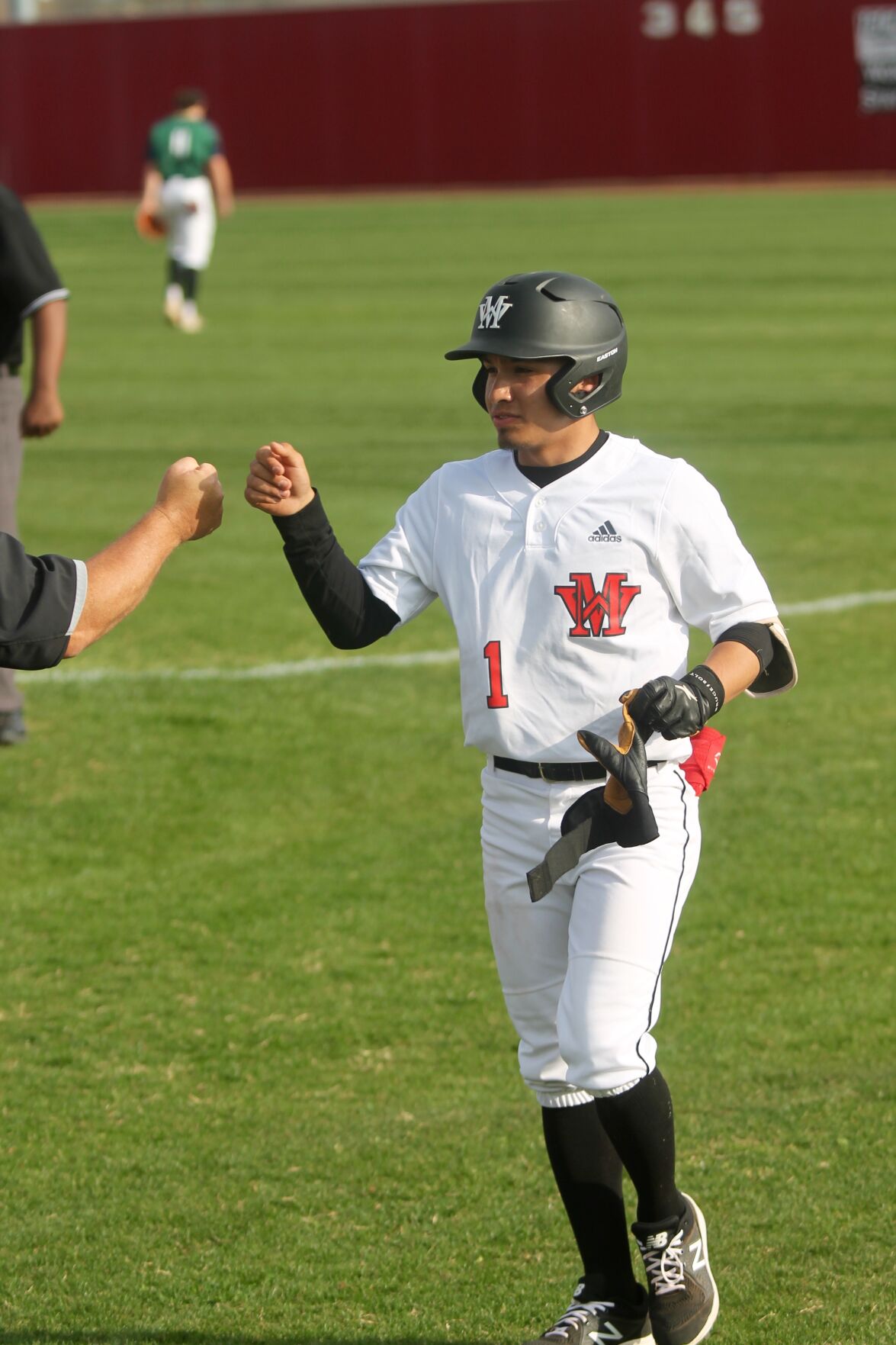 Mineral Wells pitcher Isaiah Santibanez held Iowa Park to one run before things became rocky in the seventh on Tuesday. 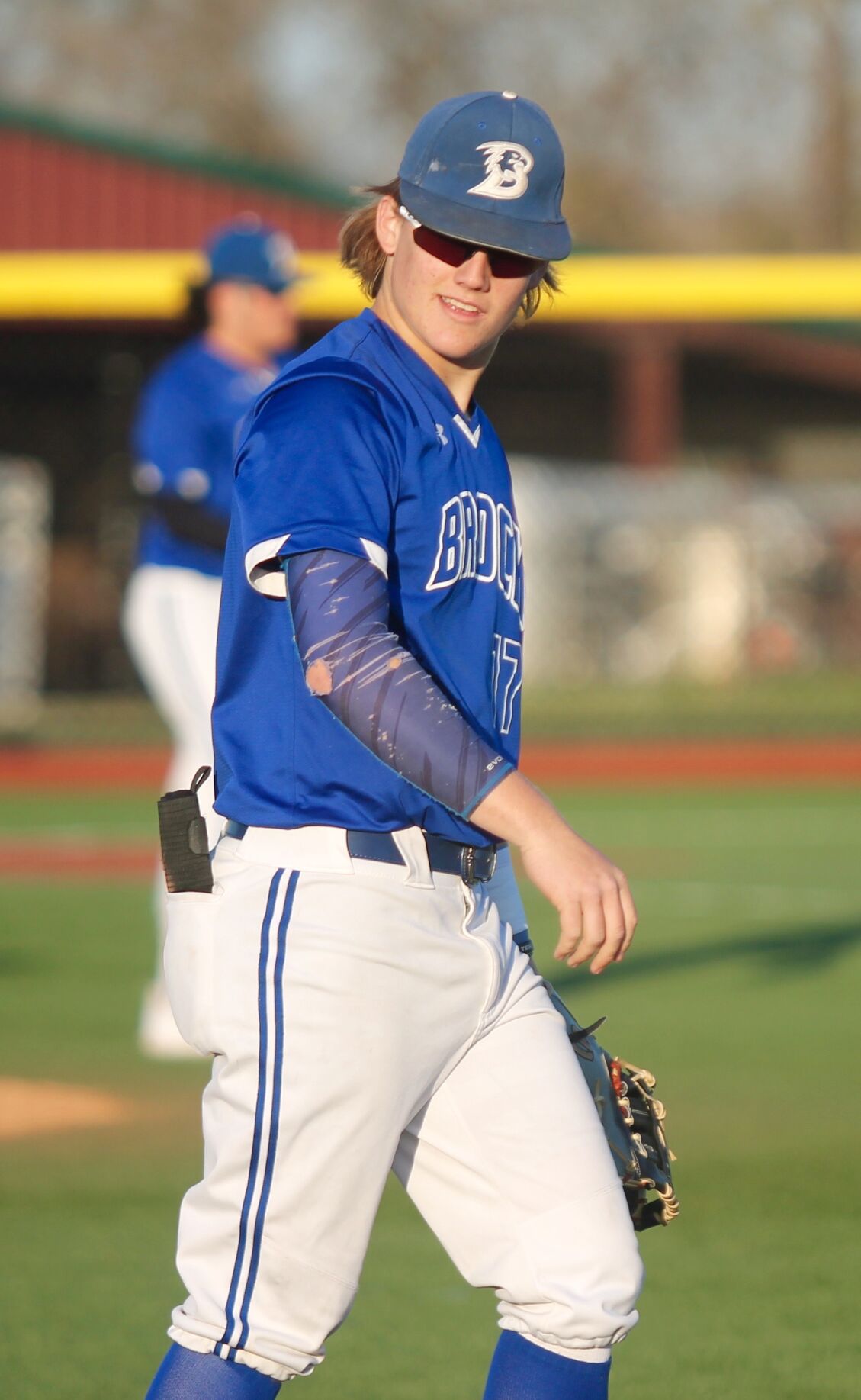 Payton Shaffer smashed three hits, including a home run, for Brock on Tuesday. 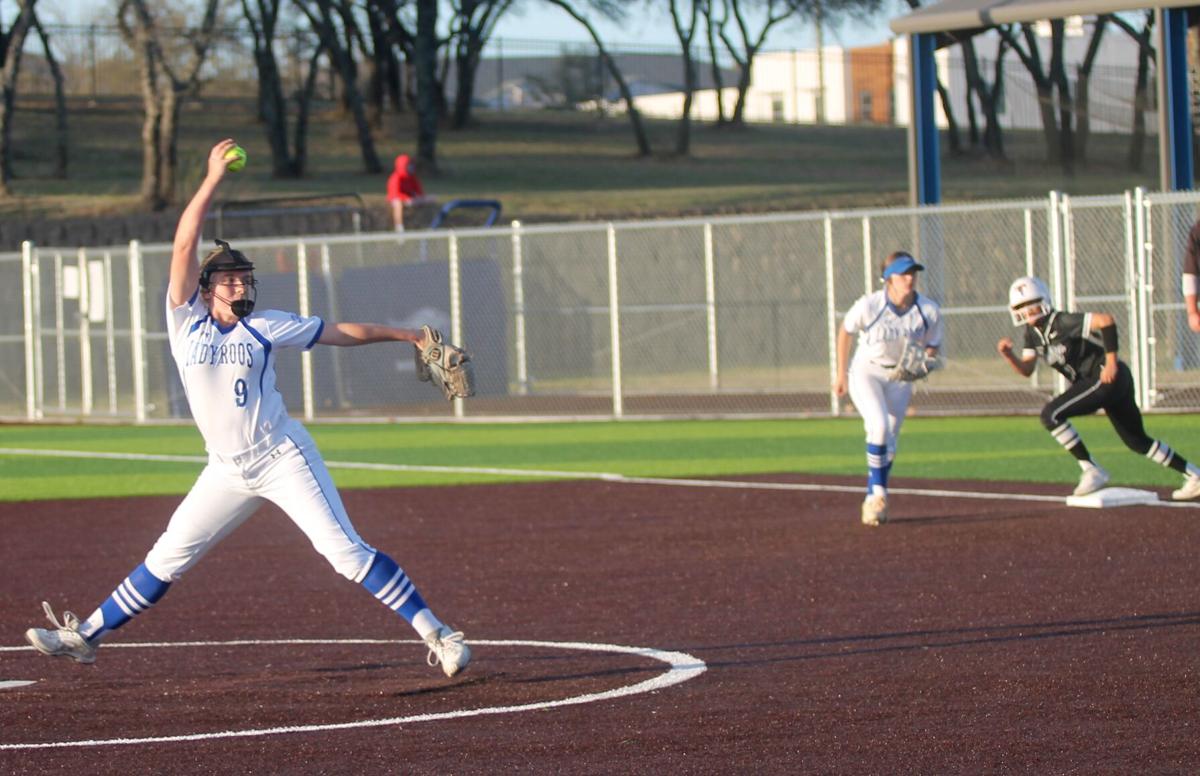 Lauren Belles was her usual dominating self on Tuesday, allowing just one run in seven innings on the mound. 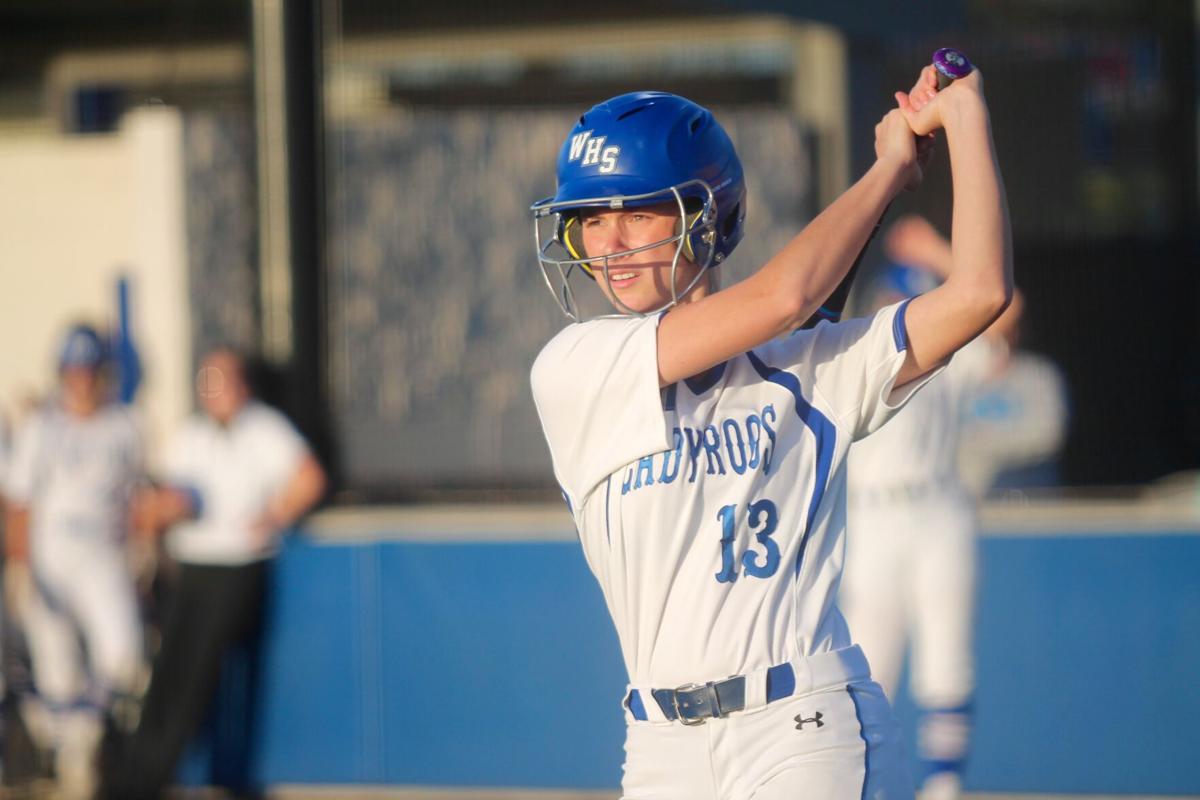 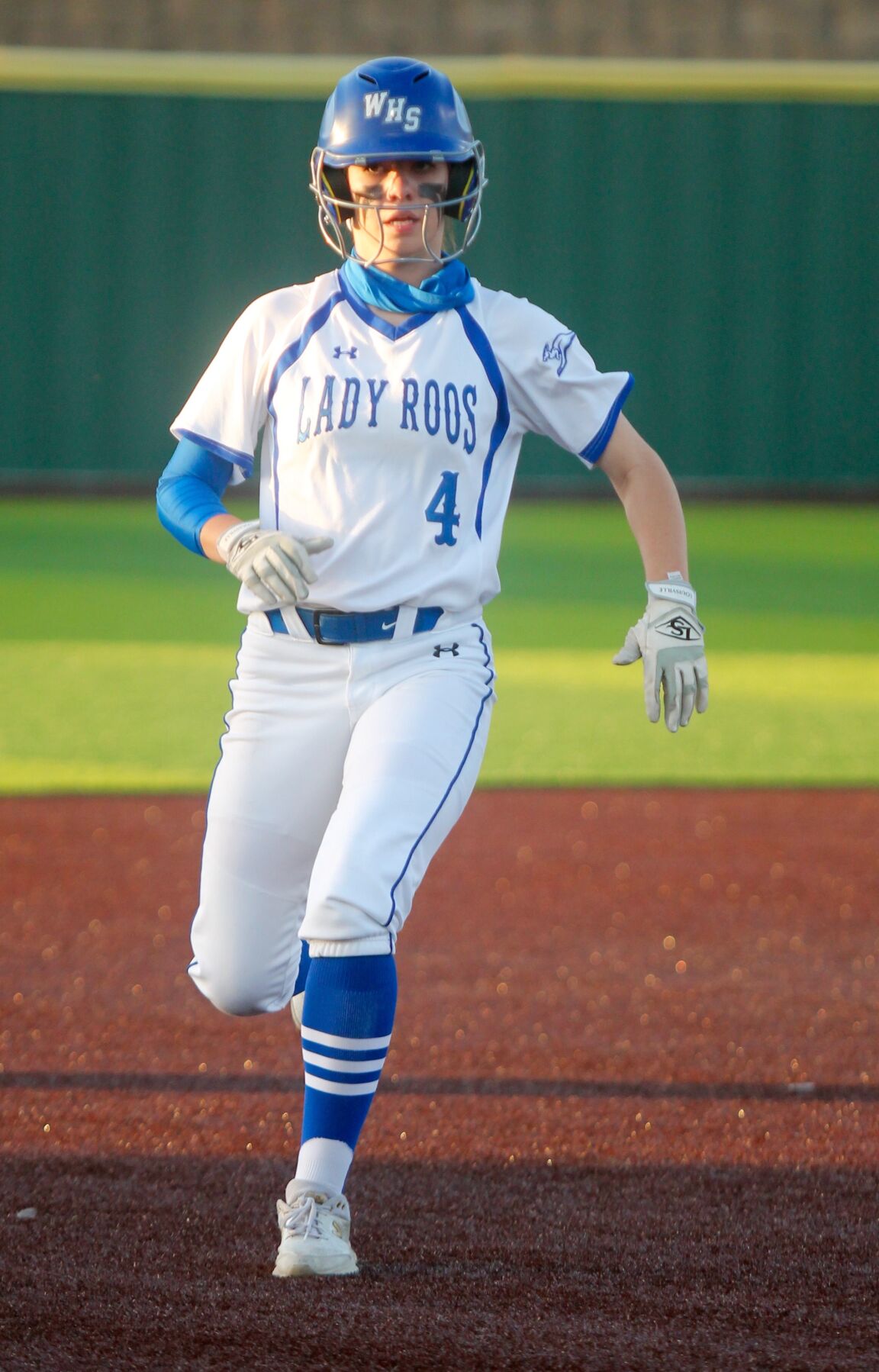 Hannah Reed slows down on her way to third base after a teammate's hit goes foul. 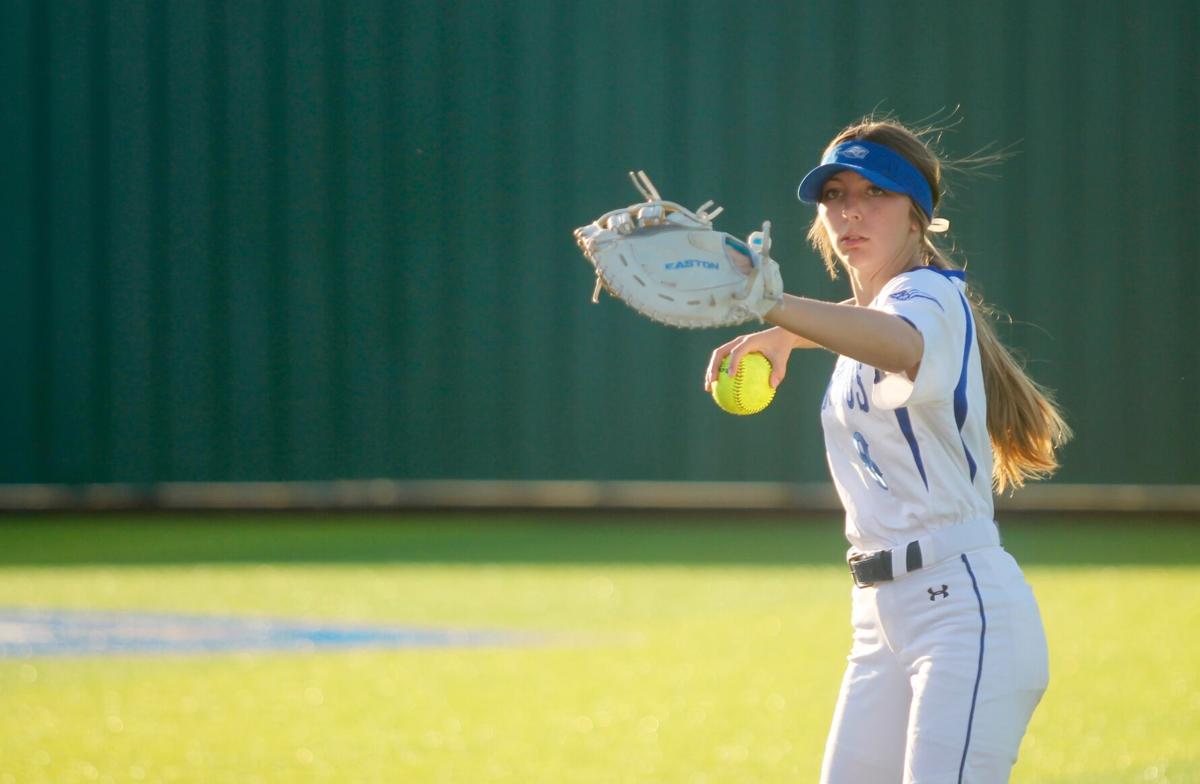 Morgan Skold and the Lady Roos enjoyed the warm spring air and golden sun on the horizon while demolishing Trinity to remain undefeated in district play. 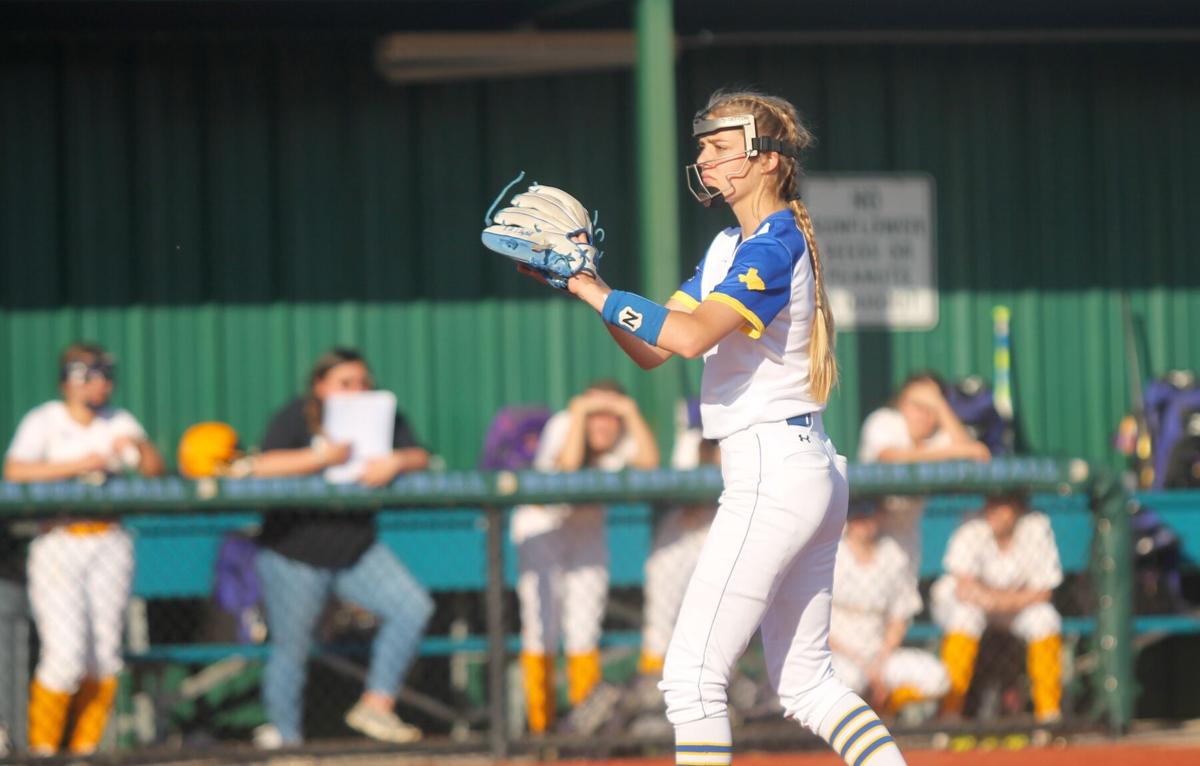 Brock pitcher Melania Middleton threw a shutout from the mound and knocked in four RBIs on three hits while batting at the plate for a whopper of a game. 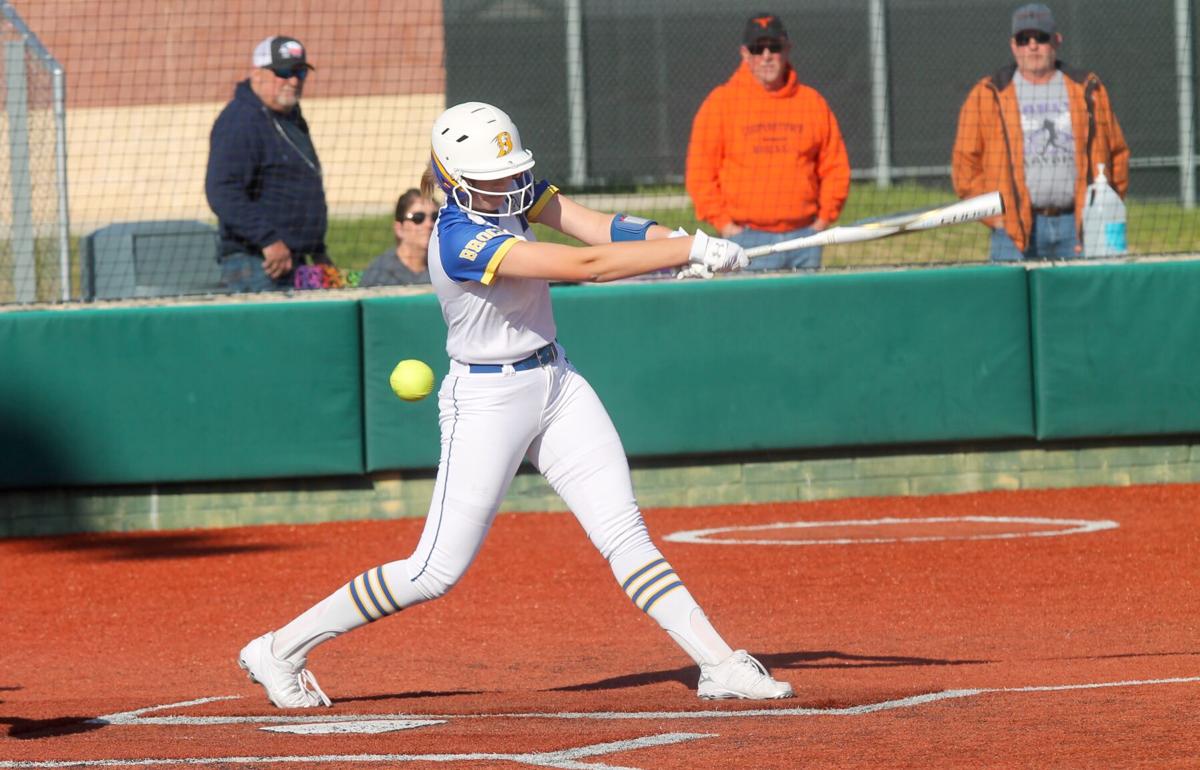 Tessa Cowan missed this ball, but her time at the plate proved to be productive, helping Brock win another district contest on Tuesday.

Friday’s heartbreaking 0-1 district loss to Bell stung, and the Roos sat with Head Coach Jason Lee for a long time afterward discussing the private things that battle-tested warriors convey behind closed doors — or, in this case, behind a netted batting cage. It was the last night of winter, and the Roos felt the coldness.

Spring forward to Tuesday at Roo Field. The sun was shining. Spring had arrived, a time of long days and warmer evenings — and redemption!

The Buffalos of Haltom drew first blood, putting up a run in the first inning. The Kangaroos of W-Town responded with their own run in the bottom of the first, aided by a Haltom fielding error.

In the third inning, Roo bats blossomed like redbuds, and by the time the pollen had cleared, Weatherford was up 9-1.

Haltom fought back and might have put a gnawing feeling in the pits of a few Roo stomachs by scoring six runs in the fifth and sixth innings after Weatherford’s bats had cooled.

The Roos’ big lead held, though, with the help of strong pitching and defense, and Weatherford improved its district record to 2-1.

This one-run game was up for grabs heading into the seventh inning. Isaiah Santibanez had pitched with strength and finesse for six of those innings, but Iowa Park scored four more in the top of the seventh. The Rams’ big bats remained quiet.

Tristan Boedeker pitched three and 2/3 innings and struck out five batters while allowing one run on no hits.

The Bearcats punched in two runs in the first inning, three runs in the second, one in the third and one in the fourth before cooling. By then, Brewer was down by six runs and never recovered.

Creed Willems punched in a run to start the game, and the hits kept coming from Max Belyeu, Nolan Garcia, Hunter Rudel, Bridger Wilson and others.

Carter Shands earned the win on the rubber, throwing a complete game with nine strikeouts.

Poolville belted five hits compared to Lindsay’s four, but the Monarchs had difficulty transforming hits to runs on Tuesday.

Ty Smeal pitched a complete game for the Monarchs, tossing six strikeouts and giving up five runs on four hits.

The Pirates have a chance for revenge soon.

Peaster plays a district game at 4 p.m. Friday at home against Bangs.

Lauren Belles has pitched and won every district game this season, and her hot hand was on full display Tuesday. She kept Trinity’s bats tied in knots for most of the evening, giving up just one hit and run. The problem was, Trinity has an ace of its own named Mackenzie Lucio, who threw 11 strikeouts. Her curveball kept the Lady Roos off-balance and chasing balls high in the strike zone, Head Coach Jeff Lemons said.

For a team that’s been ending most of its games early by the run-rule, the Lady Roos didn’t seem themselves despite winning by four runs.

“We had a few missed opportunities with some missed signs and less than ideal base-running, but any win is a good win in district play,” Lemons said. “It had been awhile since we played a full seven-inning game, so that was good for us.  It also showed us what we need to improve on to be successful the rest of the year and hopefully into the playoffs.”

Catcher Addie Tidwell knocked a double, but the big bat of the evening belonged to Bella Garcia, who banged three hits, including a double and home run, and batted in three runs. Tidwell picked up an RBI, as well.

Lady Rams batters put some pop on the ball on Tuesday, but so did Graham. The Rams tallied 21 hits, including multiple-hit performances by Abbey Tincher, Cadence Colwell, Makayla Higgins, Aaniya Pruitt and River Pugh.

Brock’s young team is playing like grizzled veterans, winning another game by run-rule after lighting up the scoreboard on Tuesday night. The Eagles exploded in the fourth inning, knocking in five runs on hits by Tessa Cowan, Carson Presti and Emmy Windle. Brock would go on to notch 11 hits for the evening.

Pitcher Melanie Middleton threw a shutout for the Eagles but was a force at the plate, too. She recorded three hits and four RBIs. Cowan batted in three runs, and Trinity Bradshaw knocked in a couple.

Santo plays at 5 p.m. Friday at home against Tolar.