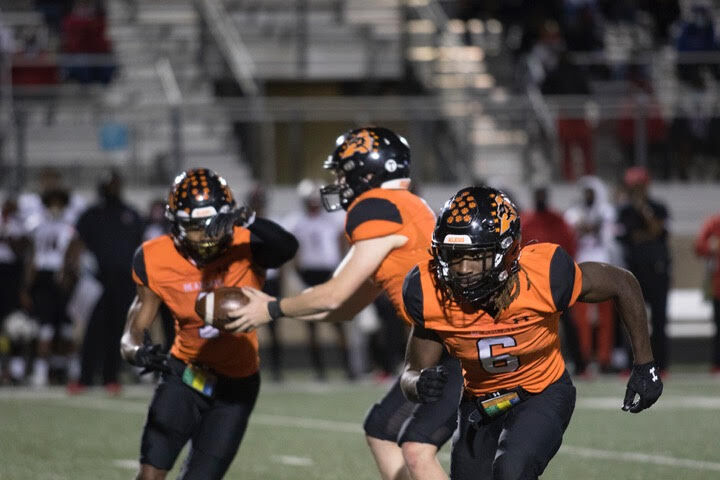 JoJo Earle, left, and Demarco Roberts, right, proved too much for North Forney to handle on Friday at Globe Life Park in Arlington. 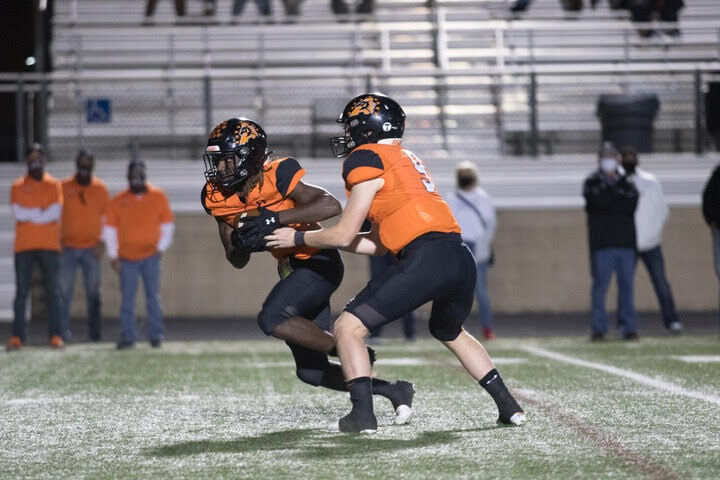 Aledo running back Demarco Roberts scored early and often to help the Bearcats win the 5A area championship on Friday.

The Aledo Bearcats, like most teams, have battled COVID-19 issues along with opposing teams. The zigs and zags continued this week, with Athletic Director Steve Wood lacing up his sneakers and headset to fill in for a defensive coach under quarantine.

Aledo was favored against North Forney at Globe Life Park on Friday afternoon, but this was the second round of the playoffs. Few easy games exist at this stage of the season.

Aledo won the coin toss and deferred to North Forney, choosing to kick off first. The Falcons began at their own 25. On the first play, Chris Wright disrupted the QB’s pass attempt, showing why the senior Bearcat was recruited by the University of North Texas.

The Falcons responded with a no-huddle offense that seemed to catch the Bearcats on their heels. The Falcons reeled off five first downs on 10 plays, mostly on runs up the middle of the defense, and took a 0-7 lead with 8:51 left in the first quarter.

Aledo wasted little time responding. A 51-yard pass to Jaedon Pellegrino on third down set up the Bearcats at their own 10. JoJo Earle ran it into the paint on the next play behind a spectacular block by fellow running back Demarco Roberts. The game was tied at 7-7 with 7:18 left in the first.

The Bearcats defense stiffened on their next trip to the field, aided by the return of linebacker and defensive leader Sam Forman. Defensive back Bryan Allen picked off a Falcons pass and ran it back to midfield.

Aledo running back Demarco Roberts took it from there, chewing up huge chunks of turf, including a 31-yard scamper, to move the chains to first and goal. Earle punched it in from four yards out, and the Bearcats led 14-7.

(Earlier in the week, Roberts and Earle joined Wright in committing to Division I universities. Earle is headed to Alabama, and Roberts to Lamar.)

The quick-play offense stopped working for the Falcons, and they had to punt on their next possession after three plays. That put the Bearcats in decent field position with a strong wind at their backs. Several handoffs to Roberts later, including a 56-yard romp, the Bearcats led 21-7 with 9:54 remaining in the second quarter.

A personal foul against Aledo helped the Falcons offense move downfield on their next possession.  On fourth and goal from just outside the goal line, the Falcons went for a quarterback sneak but were stuffed.

The Bearcats offense took over. Earle, taking the snap in the wildcat position, tried to run outside but was tackled in the end zone for a safety.

If the Bearcats were nervous, it didn’t show.

Earle grabbed a punt on a hop, juked a couple of defenders and was gone – 83 yards to the end zone. The Bearcat defense made North Forney work for every blade of artificial grass they traversed but allowed a touchdown pass. A two-point conversion cut the Bearcats lead to 28-17 with 29 seconds remaining in the first half.

Could Aledo do the impossible and score again before halftime?

The Bearcats are the defending state champions vying for an unprecedented 10th title, but they aren’t superhuman. Few teams can score at will at this stage of the playoffs.

The Bearcats offense made a stab at scoring before the half ended. They had averaged almost 10 yards a carry by then. Scoring in 29 seconds while moving against the wind remained within the realm of possibility. Roberts couldn’t uncork any big runs, however, and the Bearcats were content to take an 11-point lead into the locker room.

Head Coach Tim Buchanan’s decision to defer the opening kickoff after winning the coin toss seemed like a wise move, since it meant the Bearcats would receiving the second half kickoff.

The Bearcats began the second half much like the first, relying on legs of Roberts and Earle and the hands of Pellegrino to chew up yardage and the clock. The drive stalled, however, and the game transformed into a defensive battle, with neither offense able to move at will as they had in the first half.

Hard-nosed football is bread and butter to Aledo, and the offense moved with methodical precision downfield, knocking five minutes off the clock before Roberts rambled 27 yard for another TD. Bearcat led 35-17 and put Falcons in a score-or-die position.

Aledo's defense ate their Wheaties at half and roared onto the field ready for war. Cornerback Jaden Allen intercepted a pass to kill the Falcons’ next drive. The interception might as well have been a death knell.

Six plays later, Roberts plunged into the end zone for his third TD of the night to make the score 42-17.

Could North Forney do the impossible and overcome a four-score lead by a team intent on becoming 10-time state champs during the most memorable year in modern history?