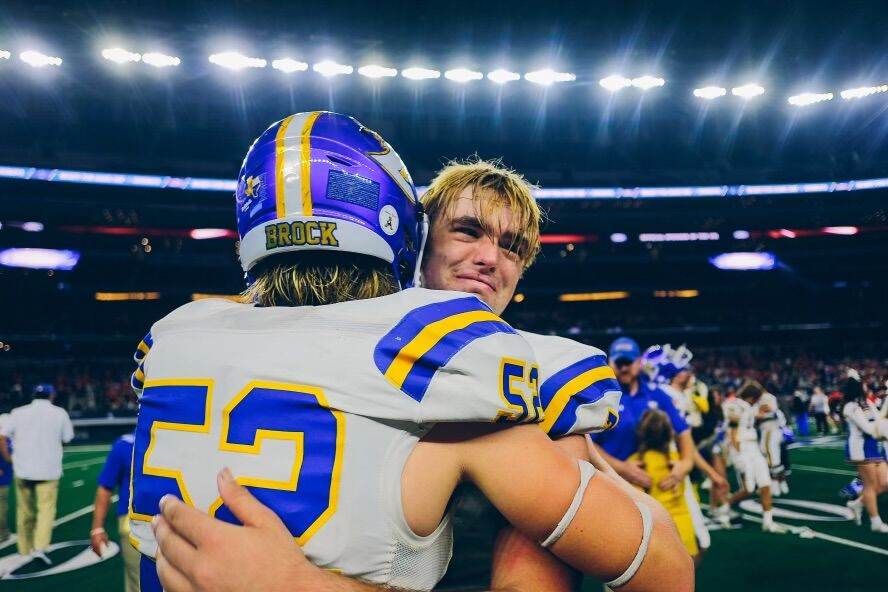 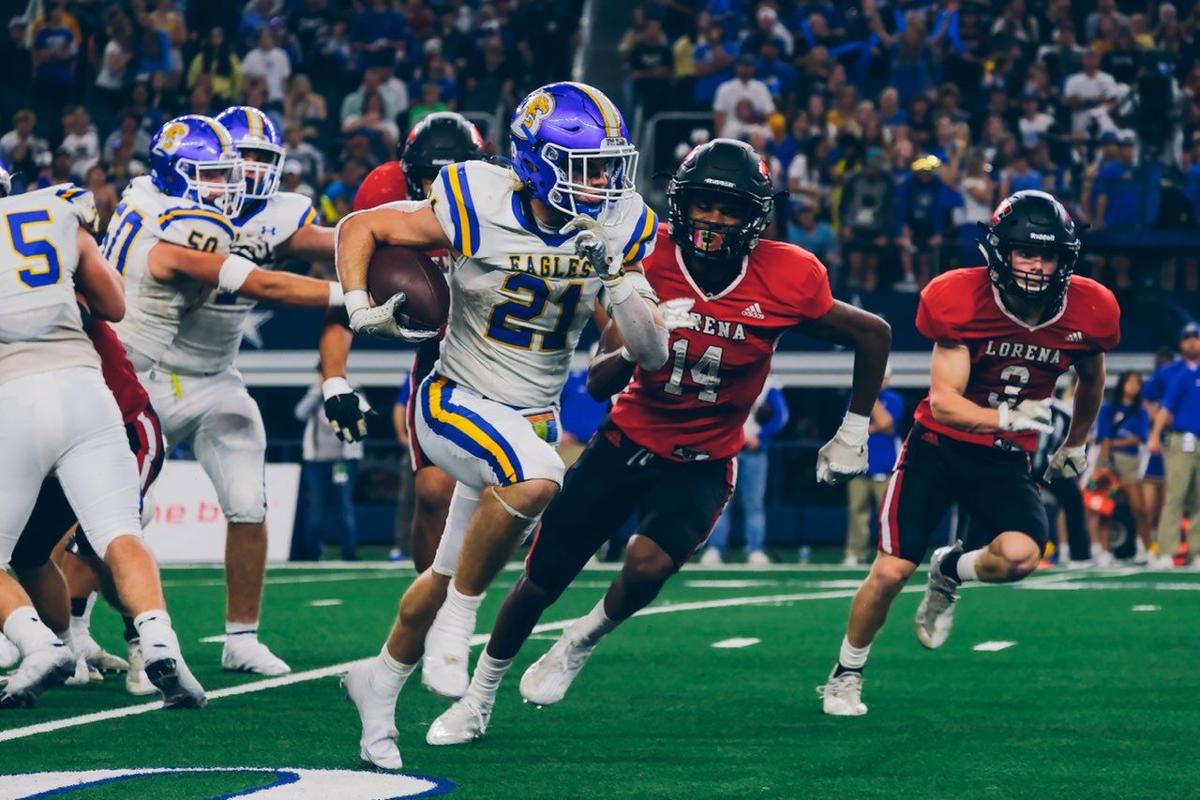 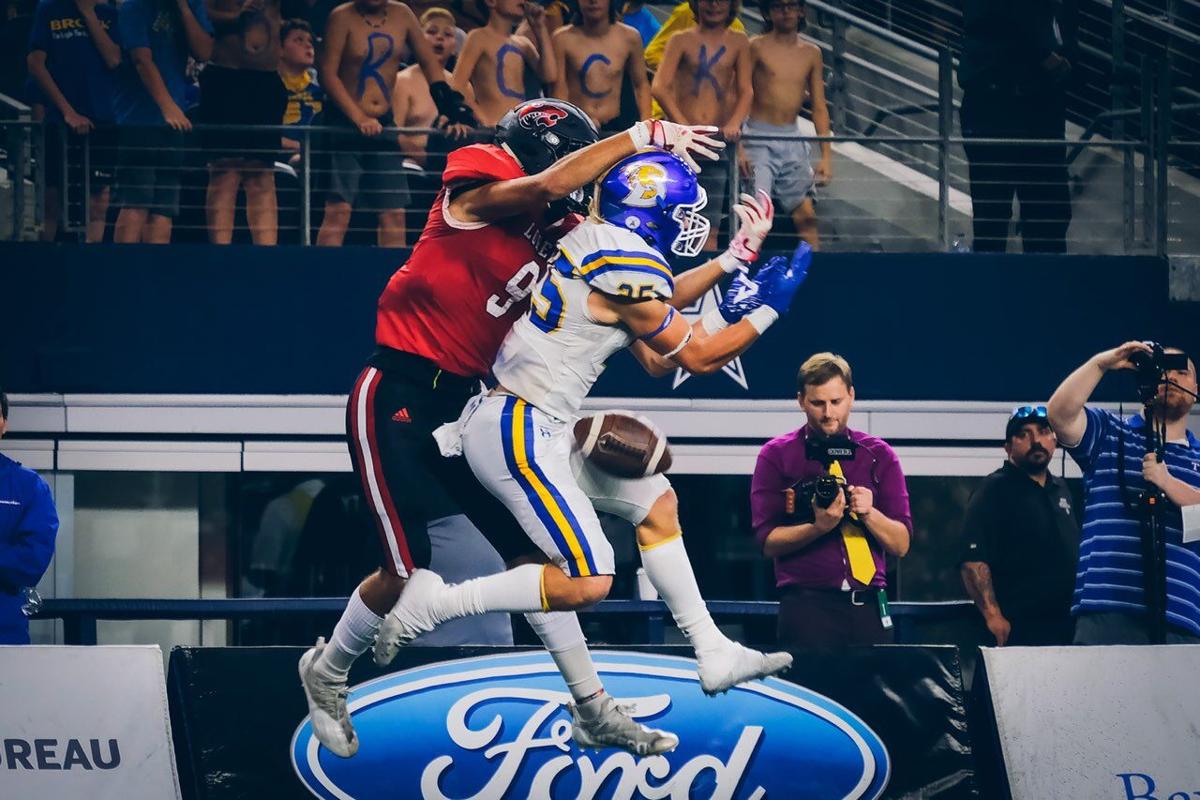 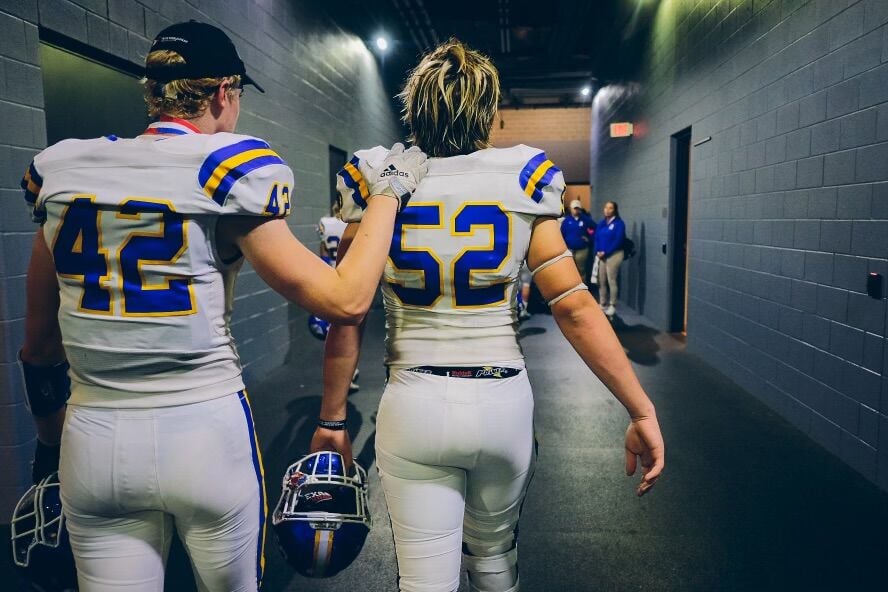 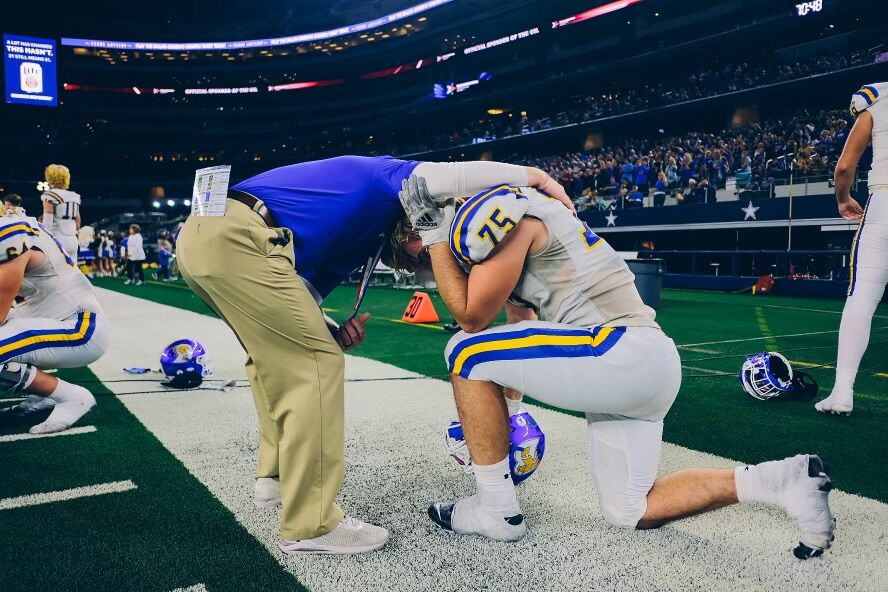 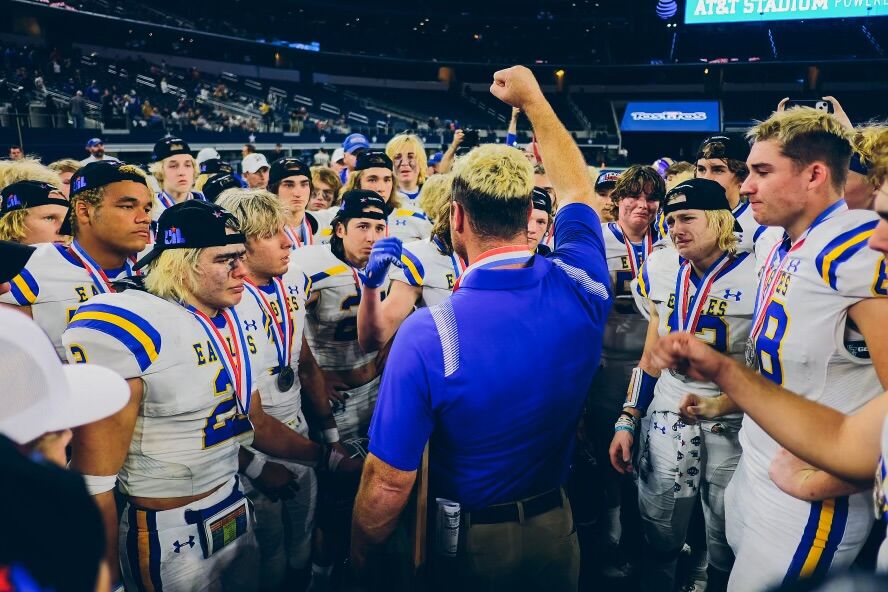 ARLINGTON — It's been a couple of years since Brock's last appearance in a state title game.

This time, they returned to the field with a new head coach in Billy Mathis and with what seemed like the entire Brock population in attendance to take on the Leopards of Lorena in the Class 3A, Division I championship.

The Eagles, though, found themselves in an early hole, trailing 14-0 with a little over five minutes to go in the first quarter.

Unfazed, Brock put together a drive from their own 20-yard line, with help from a big 56-yard reception from Tyler Moody to Eli Potts for a 56-yard gain into Leopard territory, and Kutter Wilson's run right up the middle set up first and goal for Brock.

A pass interference call on Lorena edged the Eagles ever closer to the 2-yard-line, where Kutter Wilson pounded through to get Brock on the board to start the second quarter. The kick was no good, and the Eagles cut the deficit to 14-6 at the 11:55 mark.

The Brock defense stood the Leopards up, forcing them to third-and-10 on their own 19-yard line, but Lorena was able to convert and get to the Brock 40. The Eagles stood strong again, this time forcing a fumble recovered by Potts near midfield, but the possession didn't yield points, as Brock was forced to punt on fourth down.

Lorena's quarterback completed a long pass to get the ball to the Leopard 48, but it was as far as they would get, as Cooper Massey had a huge sack to pin the Leopards back deep.

Brock took over on their 17-yard-line after the punt, and used the legs of Wilson to advance the ball across midfield, but the drive stalled after a delay of game penalty and incomplete pass forced a fourth-down punt.

With less than two minutes to go in the half, Lorena's quarterback was planted again by Massey, and the Leopards would eventually punt it to Brock.

Wilson broke free for a huge 37-yard gain, followed by a short reception from Moody to Nathan Jones, but an incomplete pass ended the second quarter with the score still 14-6.

"More efficient on offense, better tackling on defense," Mathis told the radio crews as he headed to the locker room.

The Eagles received the ball to start the second half, but went nowhere. After forcing the Leopards to third and goal from the 2-yard-line, Lorena capitalized, going up 21-6 with under 10 minutes.

The Brock offense this time came out with a spark, Moody connected with Jhett Jones, Wilson picked up a huge gain and Brett Tutter followed up with a 33-yard run to set up shop at the Lorena 6. After stops on first and second, Moody connected with Jones for the 4-yard touchdown with 5:38 left in the third, but the two-point run attempt came up short. Lorena 21, Brock 12.

The Leopards drove into Eagle territory, but Brock forced another turnover, this time an interception by Dillon Mueller, returned to the Brock 47. After short gains, the Eagles elected to go for it on fourth-and-five, but Wilson was stood up just short, turning the ball over with 1:32 left in the third.

Lorena struck fast, completing a 49-yard reception to set up first and goal with 30 seconds left, and a touchdown to close the third made it a 28-12 game.

The Leopards added another score in the fourth to make it 35-12 with under four minutes to go, but there was no quit in Brock.

Wilson picked up a big gain and Moody found Diego Hernandez for a first down on the Lorena 34 with under two minutes. From there, Moody connected against with Potts for the touchdown reception to close the gap to 35-18. Opting for another two-point conversion that would have made it a two-possession game, Moody slid for the end zone, coming up just a hair shy of the goalline.

An onside kick followed but was recovered for the Leopards, who were able to run out the clock.

Brock finishes the season at 15-1, with Thursday as their first loss of the year, and is a pretty sure bet to return again to the big stage. After all, this was their third state title appearance since the program began in 2012.