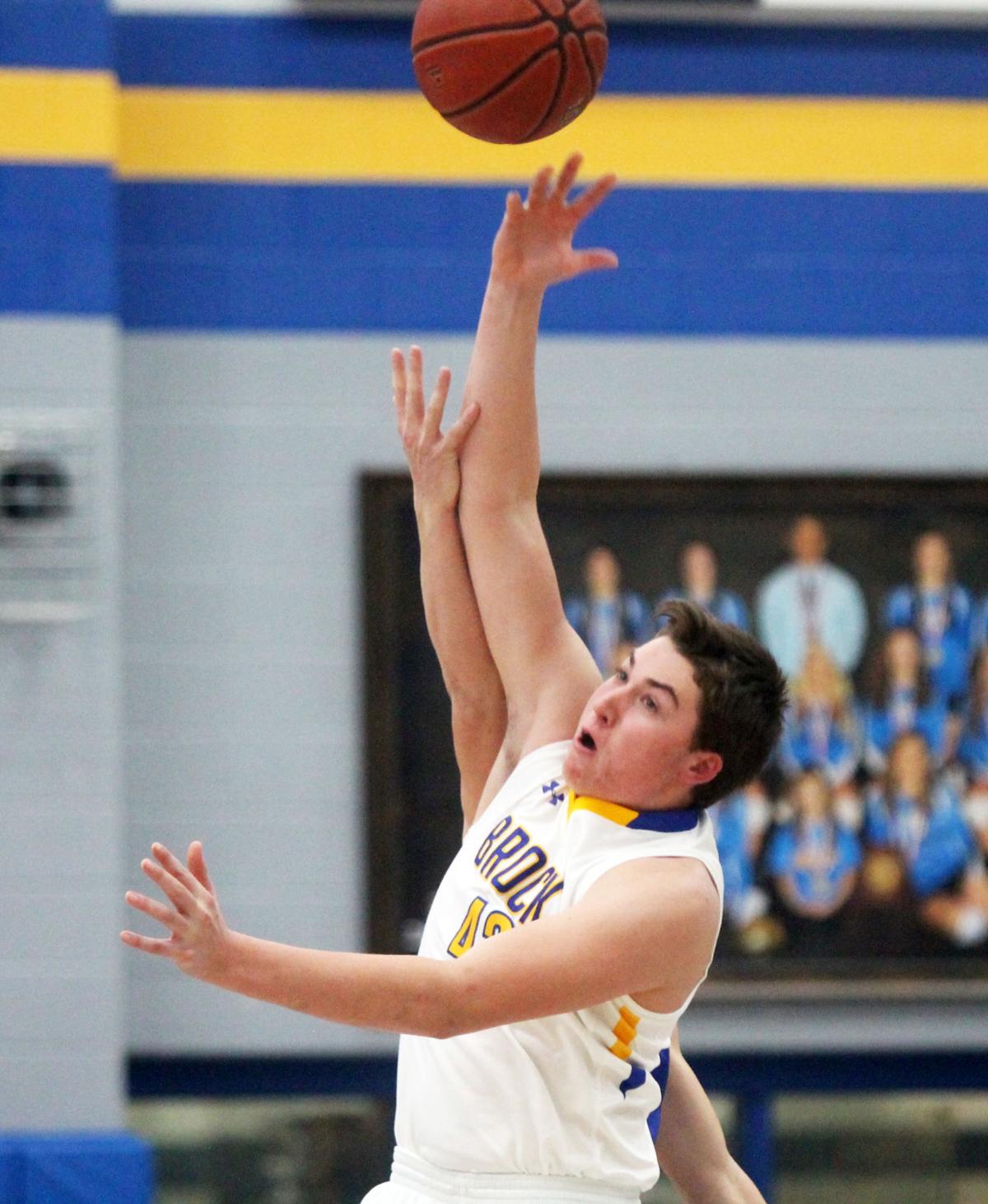 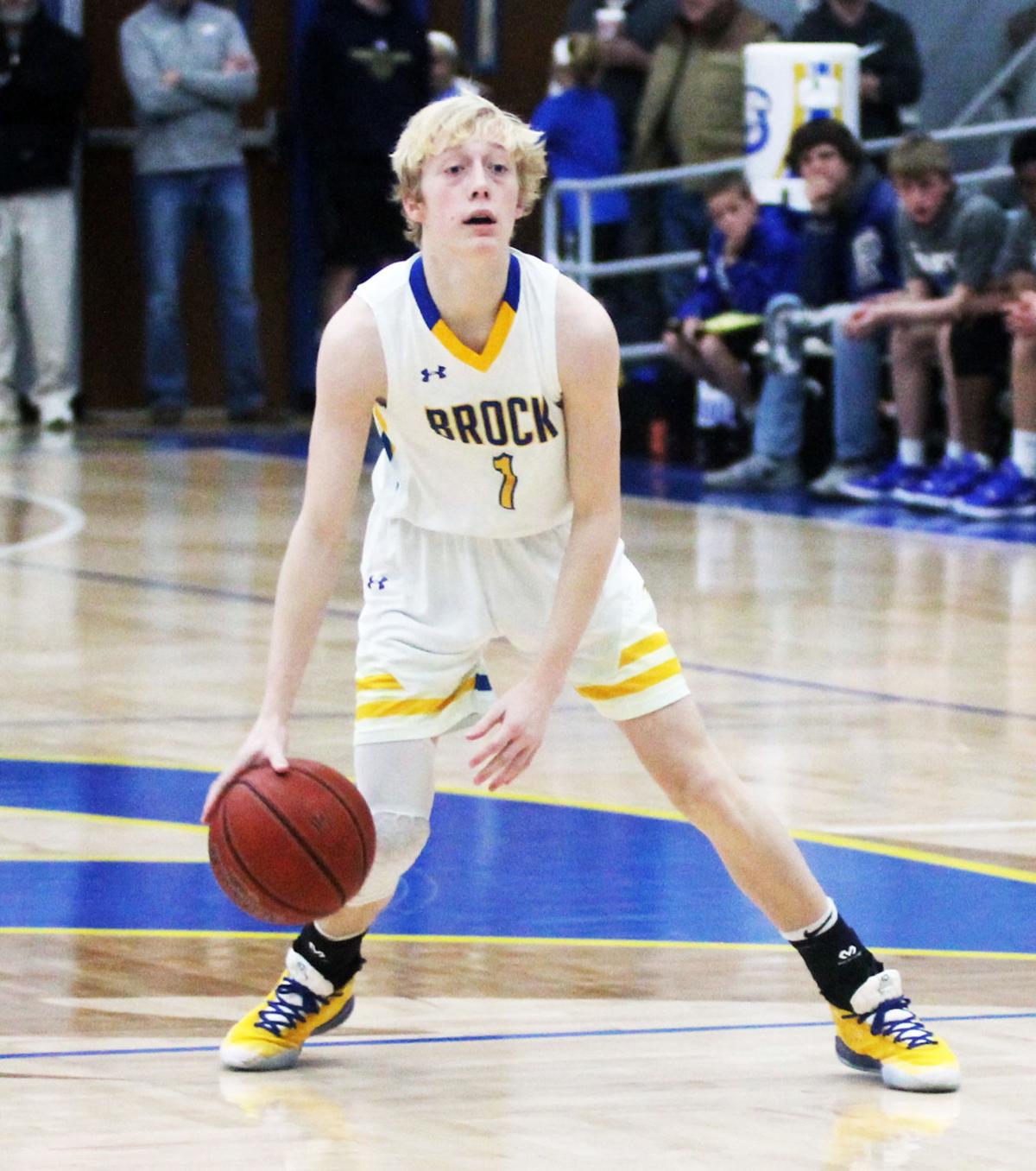 Little separated the Brock Eagles and Peaster Greyhounds for much of Friday night’s District 7-3A rivalry matchup, as the teams battled each other to a one-possession affair with less than two minutes remaining in regulation.

Leading 45-43 with 1:40 left, Peaster had a chance to put the contest away, as junior shooting guard Braxton Bosher came away with a steal near his team’s own basket.

However, Bosher subsequently stepped out of bounds near midcourt, returning possession to Brock.

While that sequence did not directly lead to points for the Eagles, it gave the home team an extra possession to try and force overtime, one which Brock took full advantage of.

Returning to the court near the Greyhounds’ basket with less than six seconds left on the game clock after a timeout, Eagles’ junior point guard Ty McCall directed a clutch pass to sophomore power forward Nathan Jones, who went up as time expired for a game-tying layup (45-45) to force overtime.

“It was a great effort by Ty McCall the point guard being able to get to the spot he needed to, and then Nathan Jones going up and getting that pass, that was  tough pass to get, but he went up and got it then made a tough shot,” Boxell said.

“It just worked out perfectly, but it was a tough play to execute.”

While baskets were hard to come by for either team in OT, Brock managed to muscle its way out in front, 48-47 with a little over a minute remaining in the extra period.

However, Peaster would attempt to reclaim control one final time, with Bosher drawing a shooting foul with 1:06 left, draining a pair of free throws to return the lead to the Greyhounds, 49-48.

However, those buckets would prove the Greyhounds last, as Brock quickly scored again to reclaim the lead, 50-49.

With the Greyhounds threatening to score one last time with less than 10 seconds remaining on the game clock, the Eagles instead sealed the win with a last-second turnover, another high-pressure moment Boxell praised his team for coming through in.

“We just told our guys we had to pressure [Peaster] and not let them get an open look, and once they got out there in the passing lanes, try to make something happen,” Boxell said.

After falling to the Greyhounds by 23 points (71-48) back in January, Boxell said it was great for his team’s confidence to come away with the series-evening win versus its rival.

“It’s big for our kids’s confidence this year,” Boxell said.

“We had some big games this year that we came through in early, and then in the middle of the year we sort of hit a slump and weren’t playing as well. And then the last several games of district, we’ve been picking it up again. Peaster’s a great team, and our kids got after it and played our brand of team ball.”

As for the Greyhounds, who had not lost a game since Dec. 27 to Decatur (66-62), Head Coach Bubba Jennings said his squad can use Friday’s loss as fuel moving forward.

“The way I kind of look at it is, you lose a game like this, you use it as a motivating tool,” Jennings said.

“We hadn’t lost a game since December, and we haven’t been playing great as of late, but I think we can use it as a wake up call to get us going in the right direction.”

Jennings said while  his team played well versus the Eagles, many tightly-contested games often come down to one or two plays, plays Brock admittedly made Friday.

“We knew it was going to be a tough game coming over here,” Jennings said.

“I thought our kids played well throughout the game. [But] we feel like, in those situations, when it comes down to the end of a really tight game, the team that makes the most plays is gonna win, and they made the tough plays at the end, and we didn’t make the tough plays.

“I thought that was the whole difference in the game.”

The District 7-3A rivals’ dramatic finish followed an equally tight first three quarters, with Brock closing out the first frame with a 9-6 run, capitalized by a buzzer-beater three for a 13-11 lead.

The Eagles’ early 9-6 run expanded to 16-8 roughly midway through the second period, as the home team extended its lead to 20-13 with 5:44 left until halftime.

The Greyhounds responded with a rally of their own late in the first half, outscoring the Eagles, 8-2 through the rest of the frame to capture the lead, 25-22.

Jones added to his late-game heroics, racking up a team-high 17 points, while McCall and senior shooting forward Brayton Chitty rounded out the team’s top three with 12 and eight points, respectively.

Bosher did much of the heavy lifting on the offensive end for Peaster, racking up 27 points, including five threes.

Peaster finished with seven three-pointers as a team.

The Eagles close out district play versus the Tolar Rattlers at 7 p.m. Tuesday on the road.

The Greyhounds close out district play versus the Breckenridge Buckaroos at 6:30 p.m. Tuesday at home.