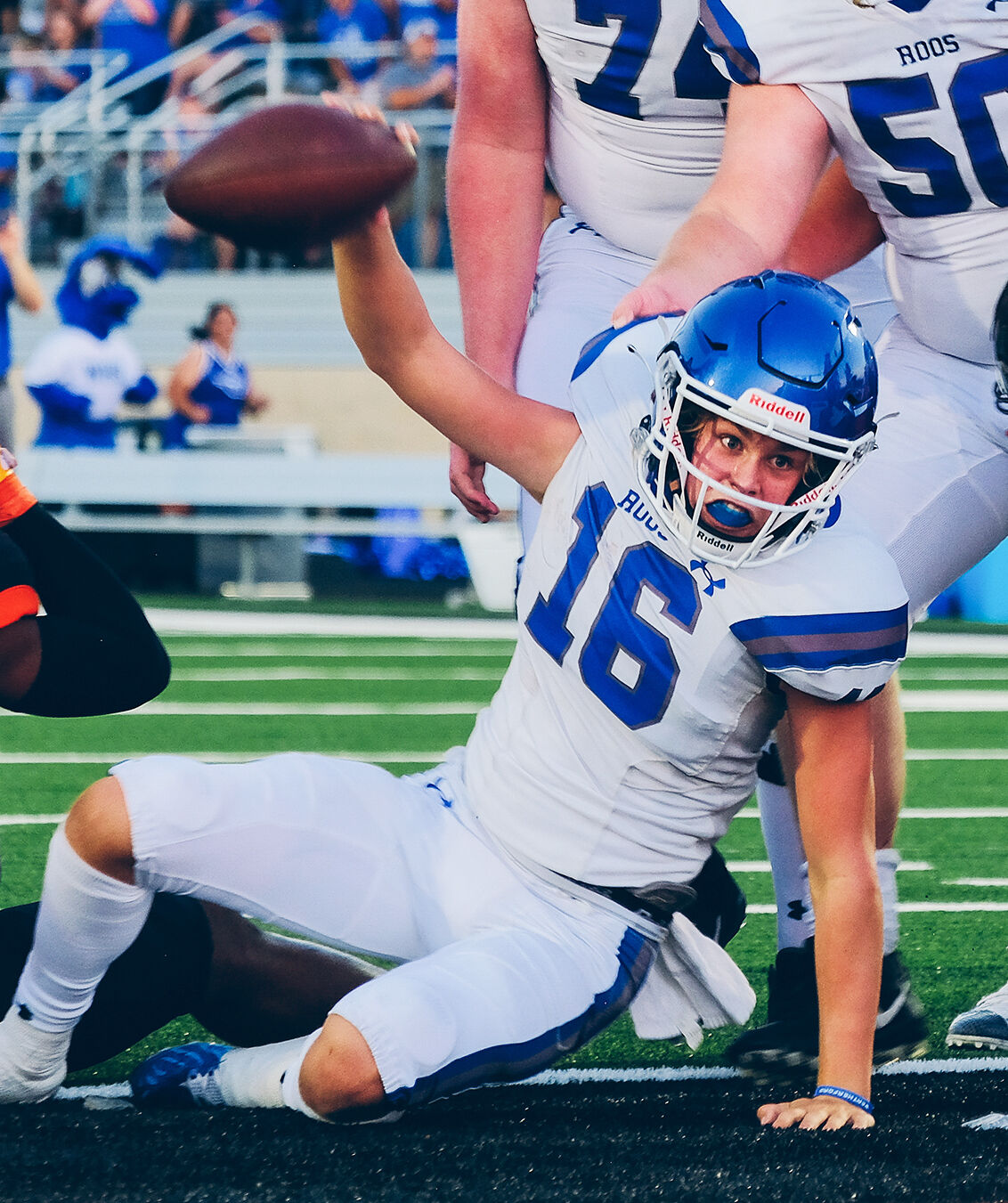 CJ Thornton's pass to Melvin Polk in the fourth quarter of Thursday's contest put the Roos on top of Paschal, 48-20. 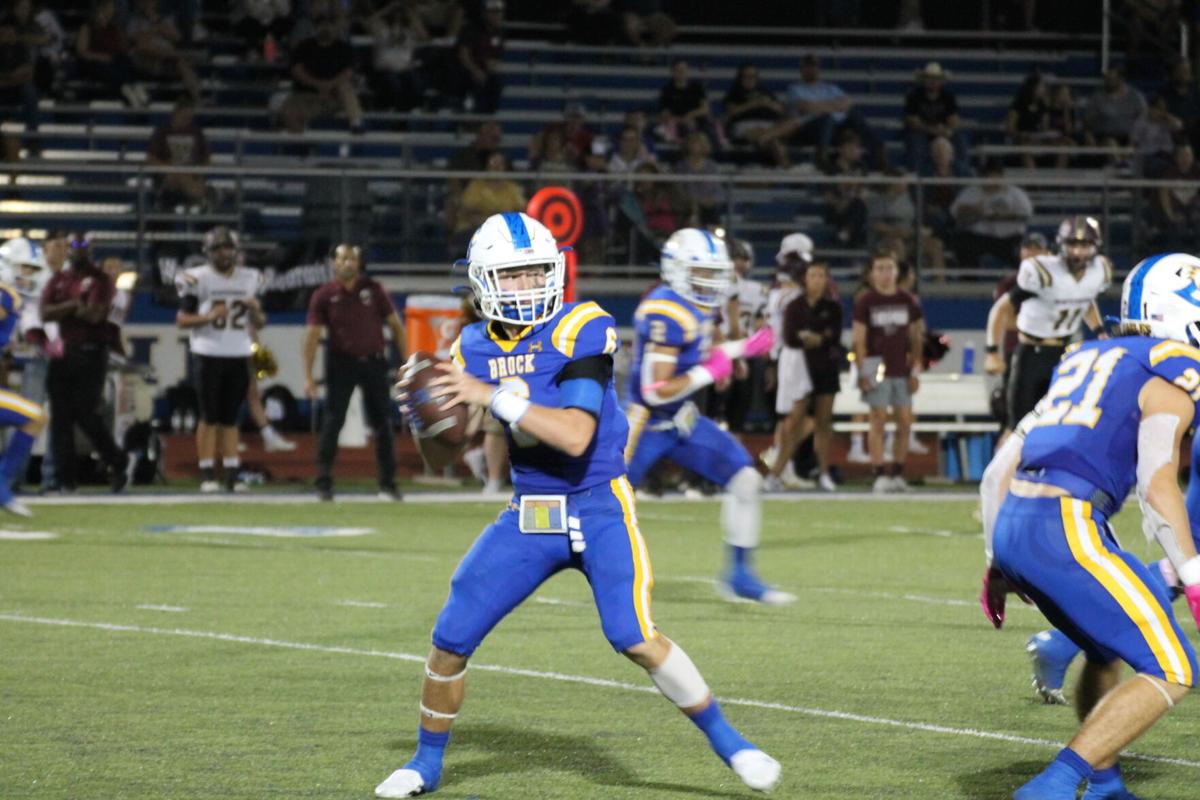 Brock's Tyler Moody eyes his next target during the Eagles' win over Whitesboro Friday.

Weatherford answered a Paschal score early, when Ryan Clark's completion to Melvin Polk set up a 5-yard score for Brayden Bork, and the point after kick tied things up at 7-7 with about five minutes left in the first.

Paschal scored again but the Roos punched right back, this time on a 9-yard carry by Clark. The kick after gave Weatherford the 14-13 advantage heading into the second.

The teams managed to tie it up at 20-all, but the Roos offense exploded in the second and third quarters, putting up 34 points while the defense held the Panthers to a mere 7.

Wasting little time, Weatherford opened up the fourth putting more points on the board on a pass from CJ Thornton to Polk, which put the Roos up 48-20.

A few of minutes later, Clark returned to the field, rumbling 40 yards into the end zone to make it 54-20.

With about eight minutes left, Paschal found a little life, and Chris Gee's 5-yard carry cut the deficit to 28, where it remained the rest of the way.

The Roos improve to 4-2 overall and face Boswell Friday night on the road.

Brock rallies back against Whitesboro

The Eagles had a rough first half against Whitesboro, but despite an interception and fumble that led to two Bearcat scores, followed by a missed field goal, the Eagles went into halftime with a 21-21 tie.

Brock turned on the jets in the second half, however, when Tyler Moody completed a pass to Elijah Potts for the go-ahead TD with nine minutes to play in the third.

The Eagles forced a stop of Whitesboro, and drove the ball down into Bearcat territory, where Moody and Potts connected again, putting Brock up 34-21 to begin the fourth.

A few minutes later, the Eagles found themselves on the receiving end of a fumble, taking full advantage of the opportunity when Jake Lindberg punched it in from a yard out for a 41-21 lead, which held strong the rest of the night.

Mineral Wells dropped its district opener in a tough loss to Iowa Park, 40-21.

The Rams are 4-3 overall, and will host Vernon next week at home.

Aledo trounced Burleson, 55-0, to maintain its perfect record — and a 99-game win streak in district play.

The Bearcats are now 6-0 overall and 2-0 in district, and have a chance to hit triple digits when they host Mansfield Timberview at 7 p.m. Friday.

The Peaster Greyhounds rallied from an early deficit to beat Bowie on the road, 35-20.

The Greyhounds trailed 20-14 at the half, but turned the heat up in the second half, holding the Jackrabbits scoreless while putting up another three TDs.

Springtown falls to Lake Worth

The Porcupines dropped their district opener, 48-19, but are sitting at 4-2 overall.

Springtown travels to Hirschi Friday for a 7 p.m. start time.

The Millsap Bulldogs lost their home opener against Eastland, 48-27. Millsap, 2-4 overall, has a chance to rebound hosting Merkel Friday night.

The Greyhounds won their district match against Bluffdale, 78-6.

The Pirates dropped their game against Leakey, 77-32, and are now 2-5 overall.

Perrin has a bye this week.

The Longhorns defeated Evant handily, 58-12, to improve to 5-1 overall.

Gordon takes on Bluff Dale on the road Friday, with kickoff at 7:30 p.m. for the district opener.

TCA fell to a Lubbock team in the battle of the Trinity Christians last week. The Eagles are now 2-4 overall and 2-2 in district play.

CCS puts on a show for Homecoming