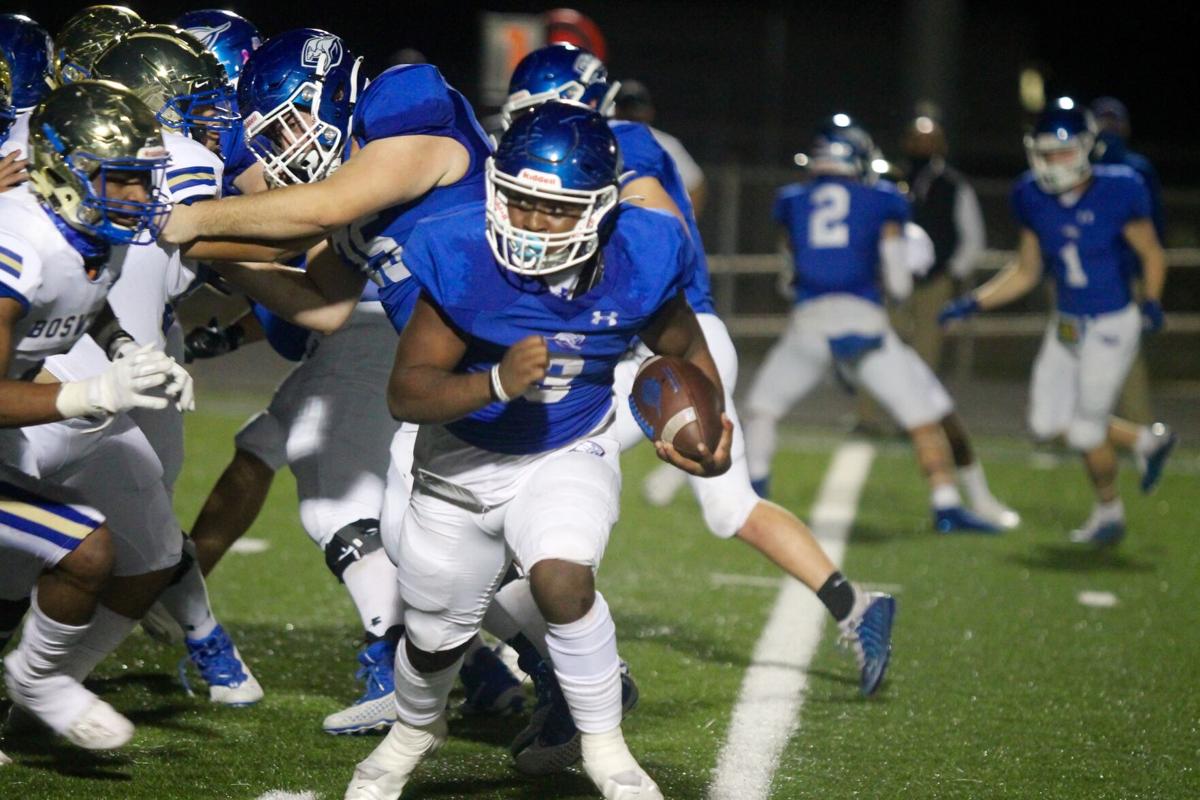 Dez Forrest and the Kangaroo offense had trouble finding their footing against the mammoth Trinity defense on Friday. 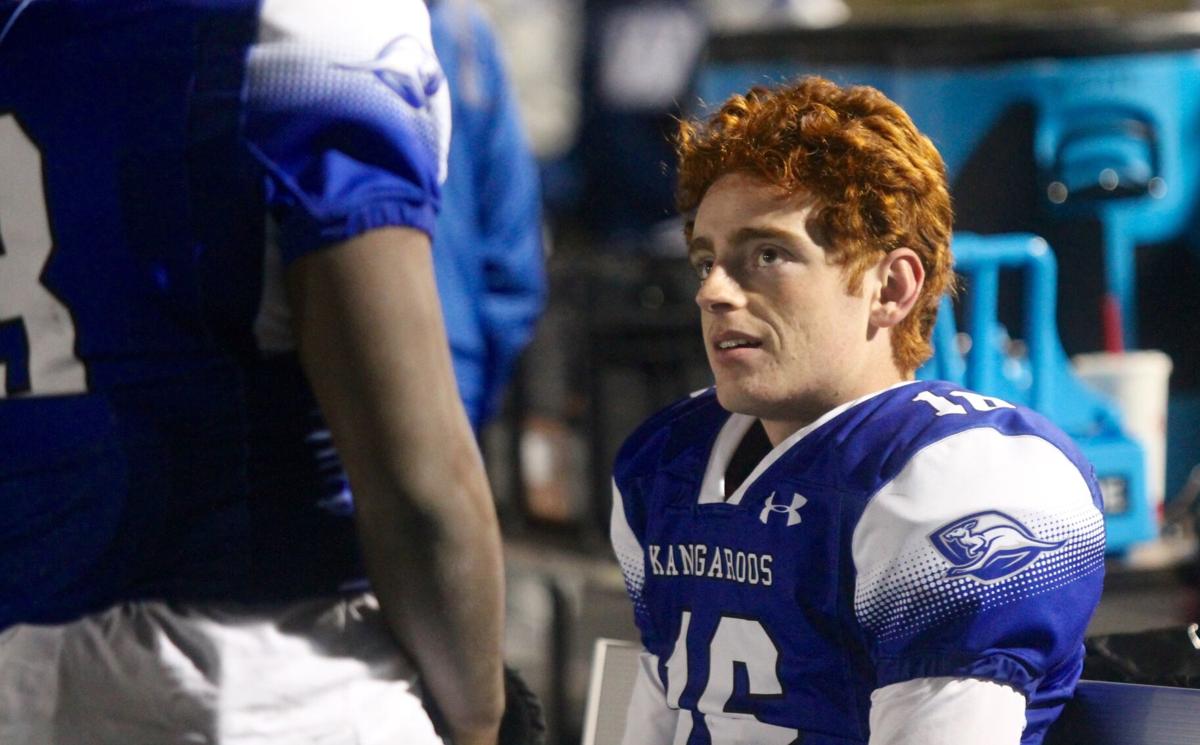 Quarterback Major Youngblood returned to the field on Friday after missing last week's game due to injury. 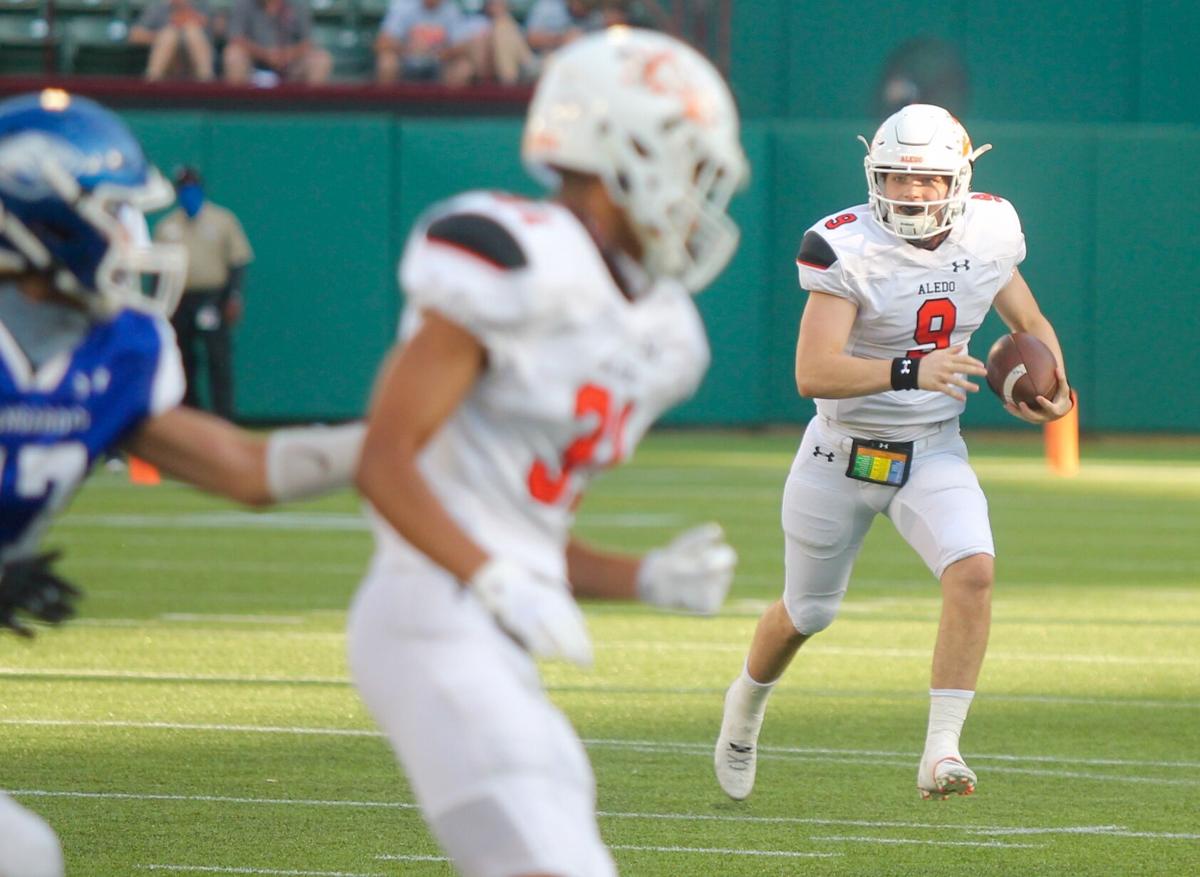 The Aledo Bearcats keep on rolling toward a defense of their state title. 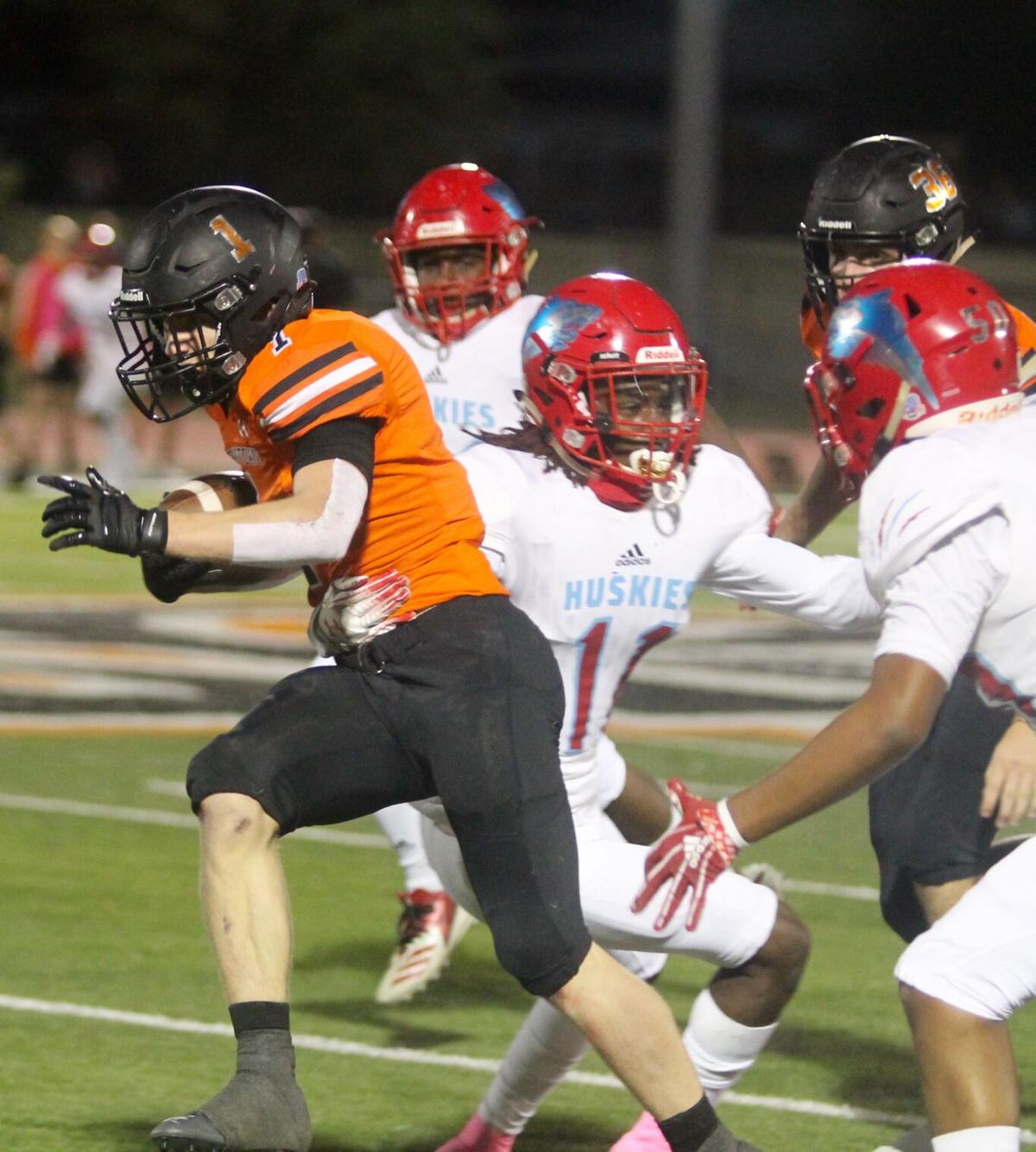 Matthew Lockard and the Springtown Porcupines continue moving forward in the playoffs after a win on Friday. 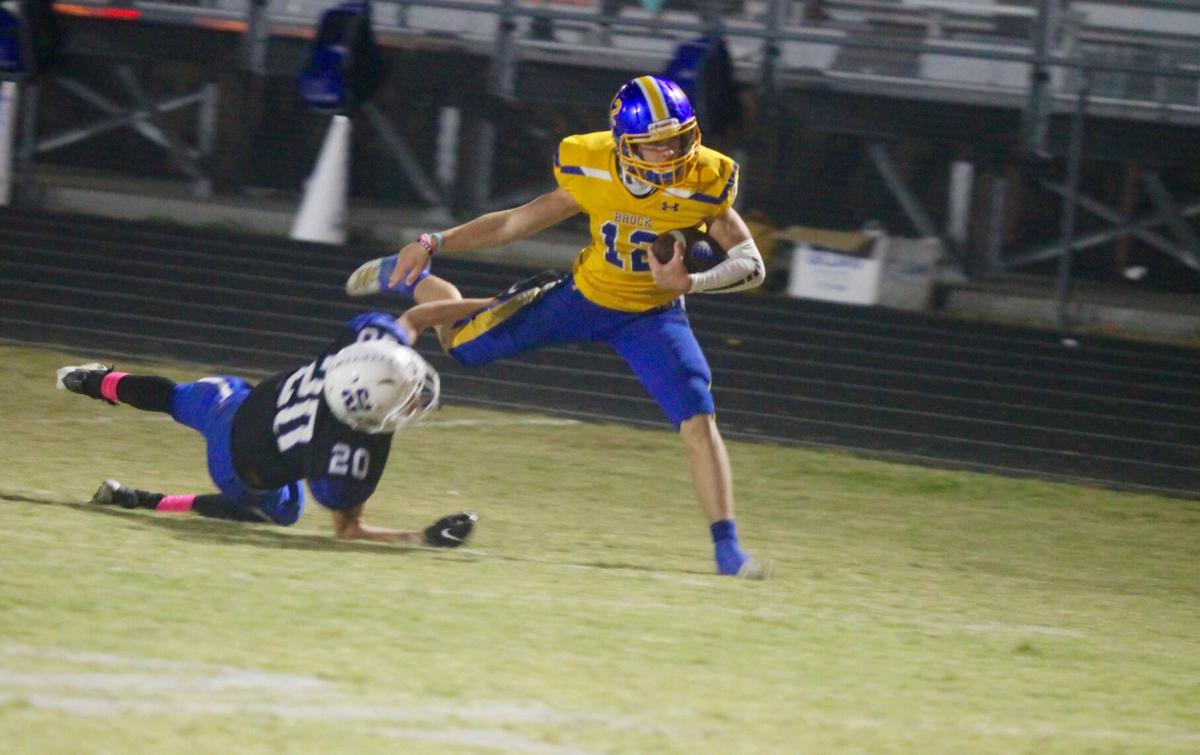 Eli Potts and the Brock Eagles have proved unstoppable so far. 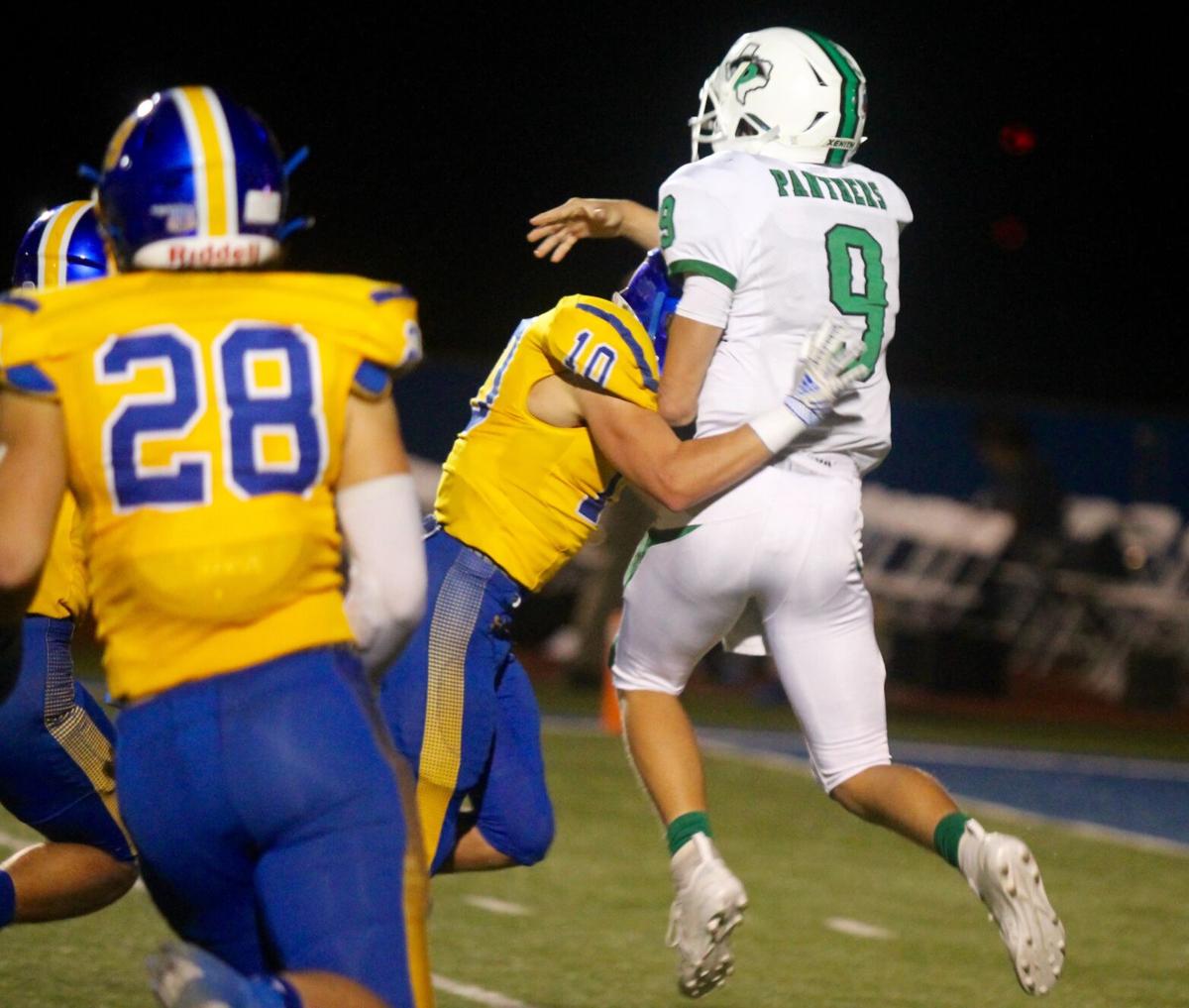 Tyler Moody, shown here making a tackle in a previous game, saw time at quarterback on Friday and went 3-3 for 59 yards for Brock. 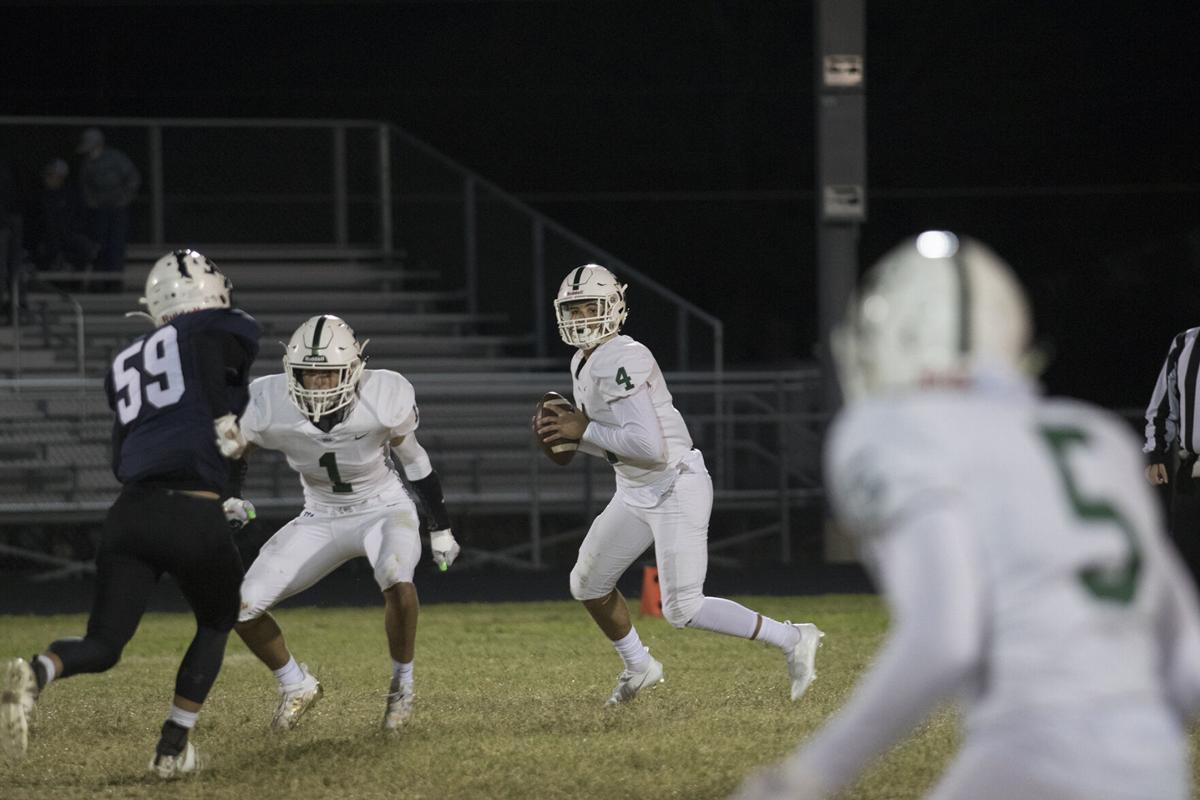 The Kangaroos were happy to see their starting quarterbacks — sophomore Ryan Clark and junior Major Youngblood — back on the field. Clark injured his ankle in the season opener against Aledo at Globe Life Park and had been hobbled for weeks. Youngblood hurt his hip at practice two weeks ago and missed the game against Boswell on Nov. 13.

Both were back on the gridiron running and throwing on Friday night, but the rust lingered. The Roos were on the road, facing the powerful, high-scoring, district leading Trinity Trojans, and there would be little room for mistakes.

Problems surfaced early. Running backs Dez Forrest and Brayden Bork could find small patches of daylight but had little luck breaking long runs against the huge oak trees that double as Trinity's defensive linemen. With the running game stifled, Youngblood and Clark tried to stretch the field with their arms but struggled to find open receivers. The offense couldn’t sustain drives, meaning the defense was logging quite a bit of leg time.

Weatherford’s defense, particularly the linemen, played admirably during long stints on the field. They butted heads and bumped chests with some of the biggest linemen they’ll see this year. Several Trojan linemen weighed around 300 pounds apiece.

Throw in a few bad bounces here and ill-timed penalties there, and the Roos saw the score begin to look lopsided on them by halftime.

Still, good signs for the future emerged. Clark and Youngblood are talented QBs and should shake away their cobwebs by next week’s match against district rival Haltom — an important game with playoff implications.

The Roos continued to play with heart and passion even after the game was a goner, which bodes well for the future. Two regular season games remain, and the Roos are in the race for a playoff spot, and that’s what Friday night football is all about.

The Bearcats faced a scrappy Mansfield Timberview team on Friday with plenty at stake. The winner would become the leader in the highly competitive 5A Region II District. The loser would fall to second place and still have brutal Burleson, eager Everman and savvy Seguin nipping at their ankles.

So winning was the preferred outcome for Aledo as it continues its quest to defend its state championship and earn a record-setting 10th title in Texas.

Fortunately for the Bearcats, they have a talented team, devoted coaching staff and supportive fan base and know how to take care of business on Friday nights.

The game wasn’t easy. The Bearcats were up by 29-20 going into halftime, and the Wolves had shown they had come to play. The Beatcats, though, didn’t become state champs by collapsing in second halves and giving up leads.

That leaves Cleburne and Burleson left on the schedule for the Bearcats before playoffs begin in mid-January.

Willow Park’s Trinity Christian won its first playoff game, topping the Shelton Chargers of Dallas in a hard-fought battle on Friday. The game was the Eagles' bi-district playoff opener for TAPPS Division III.

"It was important for our program to win a playoff game again," Trinity Christian Head Coach Joe Hamstra said. "We did not win one since our state title game 2018."

Friday's game was the first played by Trinity Christian in 21 days, and Hamstra said the rust showed early in the game.

"We were able to settle down in the second quarter," Hamstra said.

The Eagles were up 16-0 at halftime. Quarterback Ryan Hollingsworth ran the first score in from seven yards out, and Jake Povero plunged in for as two-point conversion.

Midway through second quarter, Hollingsworth hit Braeden Heitz on an eight-yard screen pass that reached the end zone. Hollingsworth ran in for the two-point conversion.

Shelton cut the score to 16-6 in the third quarter and was threatening to score again when senior linebacker Braeden Heitz picked off a pass and ran it back to the Shelton 30-yard line. The Eagles regained momentum again.

Hollingsworth, Povero and and Ezra Jackson led the rushing attack for the Eagles. Big catches were made by receivers Malen Baldridge, Tyler Gonzales and Evan Chrane.

Things don’t get any easier next week — the Eagles face the undefeated Covenant Christian Cougars on Friday in Colleyville.

The Lions play at noon today against Central Texas in their playoff opener.

The Porcupines traveled to Abilene’s Wildcat Stadium on Friday to take on the Big Spring Steers in the area playoffs. The Pines needed a win to stay in the race.

The Pines didn’t waste time letting the Steers know who was the rankest bull in the pen. They scored three touchdowns in the first quarter and two more in the second to go up 35-0 by halftime. The defense didn’t mess around, either, shutting down the Steers for the duration.

The Pines are set tentatively to play Dumas next Thursday afternoon in Big Spring, although details are still being finalized.

The Eagles want to win a state championship for the first time since 2015, and doing that requires winning six playoff games.

Two down. Four to go.

The Eagles made short work of Denver City on Friday. Chris Palfreeman punched in a two-yard run early in the game to put Brock up 7-0. Quarterback Jaxon Gleaton ran another one in for a score toward the end of the quarter.

Brock’s offense uncorked in the second quarter, with Gleaton throwing TD passes to Kutter Wilson and Nathan Jones, while Wilson, Cash “Money Jones and Myles Semas all scored on the ground.

Falling behind 49-0 by halftime against the might Brock Eagles is a recipe for disaster, and the Denver City Mustangs had to gallop back home a loser.

The Eagles offense topped 600 total yards for the game while spreading the ball around the numerous players, making it difficult for opposing teams to figure out who to focus on stopping.

Next up for the Eagles is a tough Jim Ned team that went undefeated in its district and 10-1 overall.