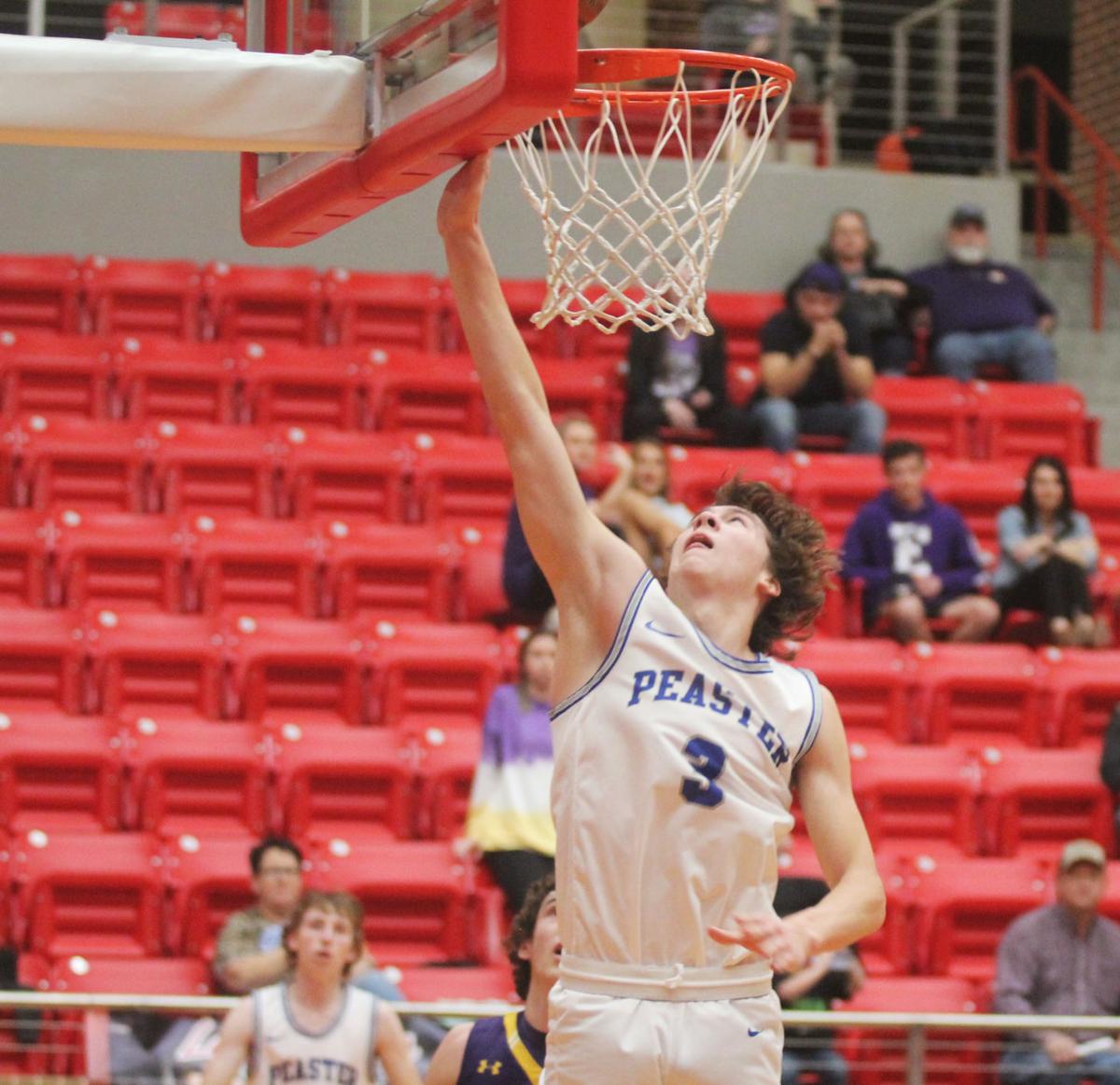 Peaster senior shooting forward Drew Smith (3) and the Greyhounds are headed to San Antonio after coming away with a pair of wins at the Region I-3A Tournament Friday and Saturday in Lubbock. Peaster defeated Abernathy, 56-40 in the regional semifinals and Shallowater, 52-46 in the regional finals. 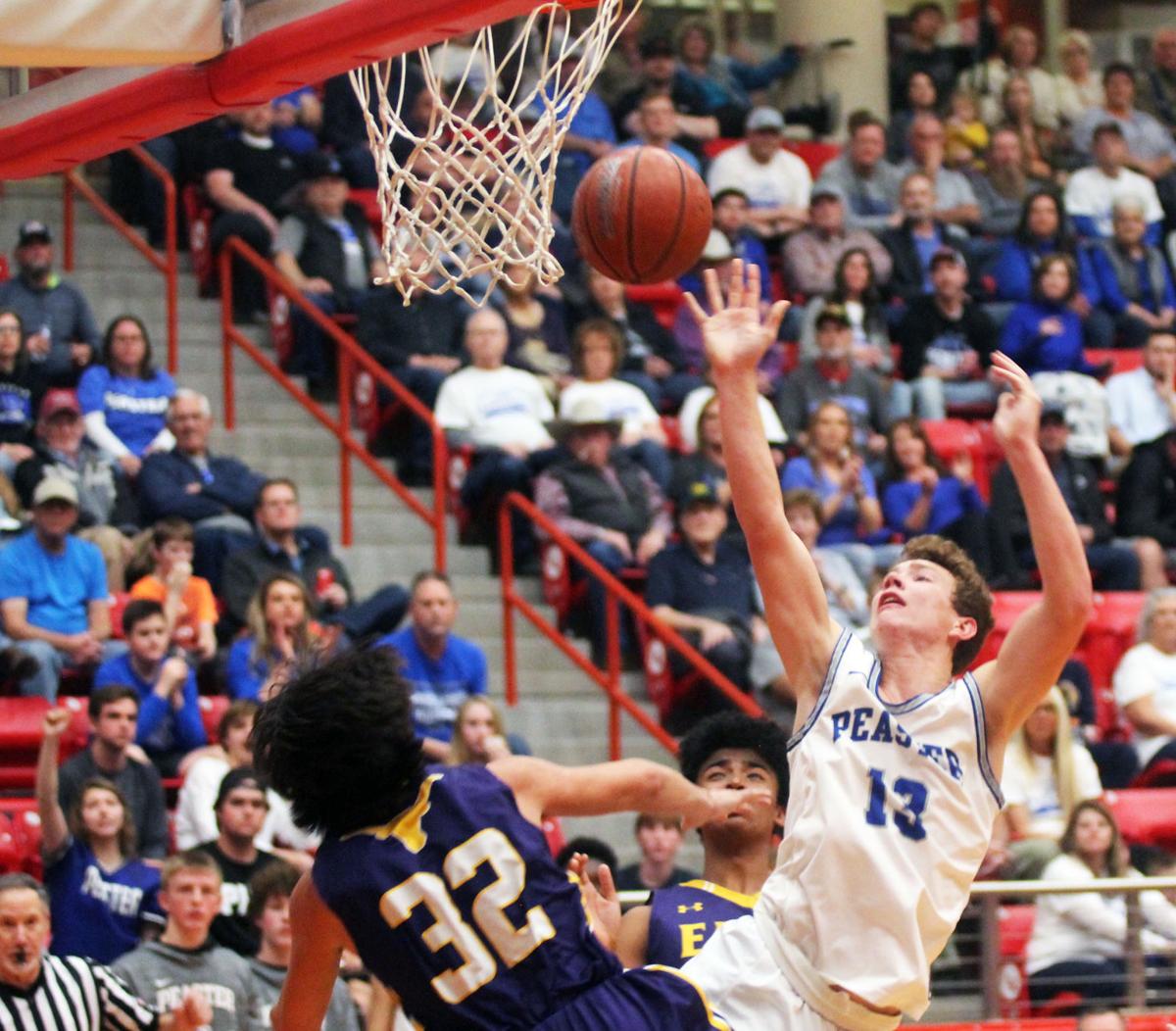 Peaster senior shooting forward Drew Smith (3) and the Greyhounds are headed to San Antonio after coming away with a pair of wins at the Region I-3A Tournament Friday and Saturday in Lubbock. Peaster defeated Abernathy, 56-40 in the regional semifinals and Shallowater, 52-46 in the regional finals.

The Peaster Greyhounds (34-5) stand only two wins away from hoisting the Class 3A state championship trophy after a convincing performance at the Region I-3A Tournament in Lubbock Friday and Saturday.

Peaster took care of business versus Abernathy in the regional semifinals, 56-40, before powering past Shallowater, 52-46 in the finals to stamp the team’s ticket to state.

Greyhounds’ Head Coach Bubba Jennings said his players had been laser focused on earning a trip to San Antonio since the team’s bi-district defeat last year, while adding that he is excited for the team’s upcoming challenges.

“The kids have worked really hard all year long. We’re built for this, ever since we got beat in the playoffs last year against Childress, we’ve had a goal in mind to get to the state tournament.”

Jennings added that his players’ commitment to their team and sport has been reflected in the countless hours they’ve spent working to improve outside of practice.

“They’ve made  real commitment to the program,” Jennings said.

“They worked hard in the offseason and spent time on their own working on basketball and improving their skills. They play in a lot of spring and fall leagues. They’re a group of kids that just really like basketball and want to be successful at it.”

“Both those guys have played well all year long,” Jennings said.

Peaster’s semifinals win over Abernathy was a display in defensive dominance, highlighted in the former’s 12-4 scoring advantage off of turnovers, a 2-of-16 three-point shooting performance by the latter and a 29-25 Greyhound lead on the boards (27 of which came on the defensive end).

Abernathy for its part kept the contest close in the first half, responding with a 15-7 second-quarter run to cut Peaster’s lead to 24-23 heading into the break.

The Antelopes remained within striking distance through the end of the third quarter, withstanding a 14-9 scoring advantage by the Greyhounds in the frame for a 38-32 score (Peaster) heading into the fourth.

However, Abernathy’s hopes faced a harsh reality in the final period as Peaster pushed ahead with an 18-8 rally, including an 11-point run late in the frame to secure the win.

Jennings said the defensive pressure Peaster sustained against its opponent through the entirety of the first three quarters began to take a toll on the Antelopes late.

“Part of our philosophy is, we play a full court game, try to put a lot of pressure on you and wear you down,” Jennings said.

“We feel like in the last half of the third quarter, start of the fourth quarter, we have a good opportunity to do well there because hopefully if we’ve executed the game plan well and executed our press, I think people make mistakes when they get tired they don’t normally make.

“I think that proved to be so in that game with Abernathy.”

The Greyhounds finished a perfect 7-of-7 from the free throw line in the contest.

Peaster’s defensive prowess was on full display yet again in the team’s regional finals showdown with Shallowater, which previously knocked out Parker County neighbor Brock one day earlier.

Despite dealing with their own shooting troubles (4-of-22 from three-point range; 16-of-46 in total field goals), the Greyhounds managed to remain out in front for much of the contest, taking a 16-13 first-quarter lead before pushing that advantage to nine points a little under halfway through the second quarter.

It should be noted while the Mustangs fared better in overall field goal percentage (17-of-39), like the Greyhounds, the team struggled from range, draining only 3-of-13 three-point shots.

Up 25-21 at halftime and later leading by the same margin heading into the fourth quarter (39-35), Peaster saw Shallowater take a three-point lead on a shot from beyond the arc with 5:28 left in regulation.

However, the Greyhounds would not be denied, quickly returning fire with a Smith three-pointer to tie the contest.

In the game’s final minute alone, Shallowater missed a pair of buckets as well as suffering a turnover before Bosher put his team out in front for good with a jumper with 39 ticks left.

Jennings said despite the Mustangs constantly nipping at the Greyhounds’ heels on the scoreboard, he had full confidence in his squad to secure the win.

“We pretty much had control of the game all the way through,” Jennings said.

“We’d be up six to eight, then they’d cut it down to four, then we’d expand it back out. They caught us in the fourth quarter and took the lead, went up by three, then we came down and responded by hitting a three to get it tied back up, and it was just a battle from then on.

“We played really good defense down the stretch and got the stops when we needed to. Braxton hit a bucket then a couple free throws to kind of ice it away for us.

“I felt pretty good when he went to the line and we were up by two.”

Bosher finished with a team-high 22 points, while Glenn added 12 points.

Peaster plays the San Antonio Cole Cougars (32-6) in the Class 3A state semifinals at 3 p.m. Thursday at San Antonio’s Alamodome.

Tickets to the event can be purchased at http://ticketmaster.com.

The Alamodome’s Clear Bag Policy can be found at https://www.uiltexas.org/files/athletics/state-basketball/Clear-Bag-Flyer-111317b-4685f8eafa.pdf.