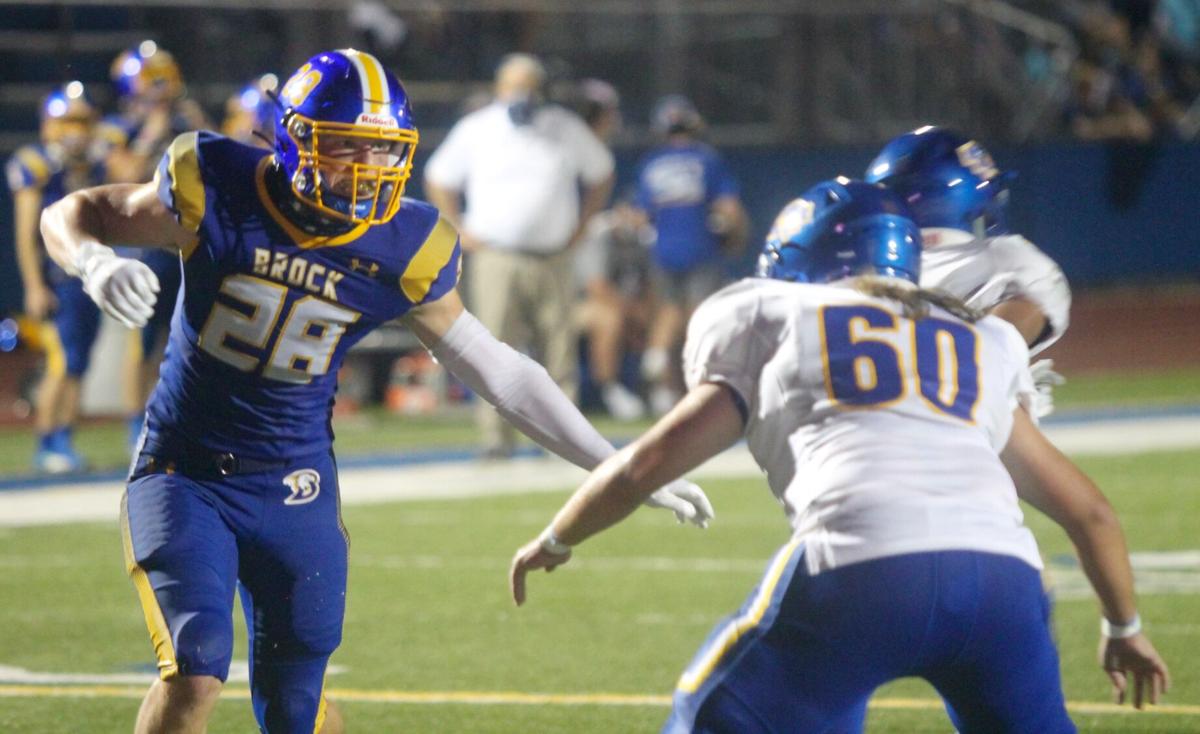 Brock defensive end Brett Drillette disrupted Community's offense all night and helped the Eagles go to 2-0 for the season. 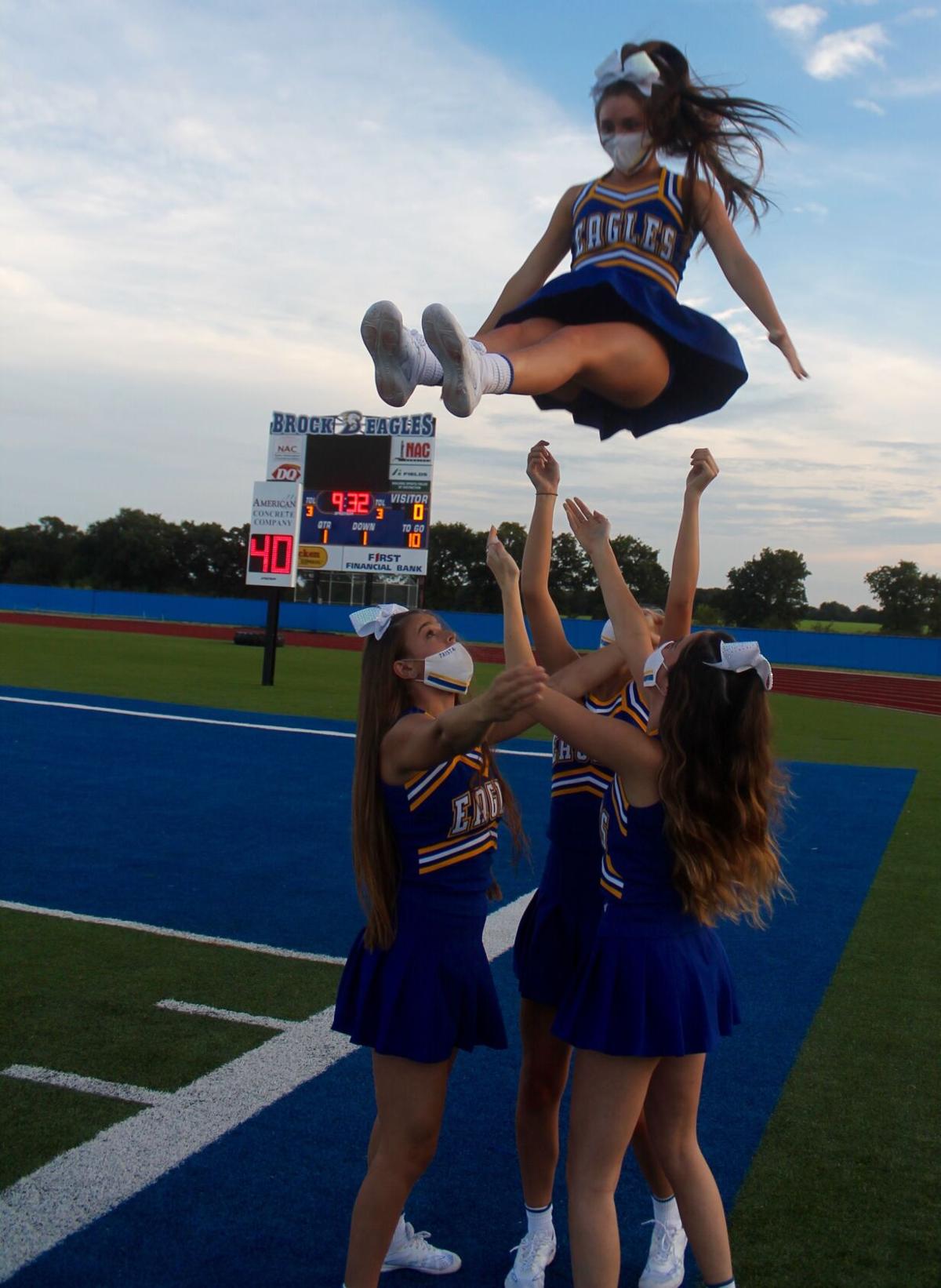 Don’t let the score fool you. This was a defensive battle -- well, for 12 minutes, anyway.

Neither offense could figure out a way to move the ball. The only scoring during the first quarter was a Brock safety, which made for an unlikely looking scoreboard at a typically high-flying Eagles game: 2-0.

A cou ole of miscues, penalties and turnovers was to blame.

The Community Braves coaches, coming off a first week loss, had tinkered with their scheme to catch the Eagles off guard.

“They came out and gave us a different defensive look, and we didn’t adjust to it — it took us a couple of series,” Worrell said.

In the first quarter, the Eagles offense punted on its first possession, fumbled on its second and turned the ball over on downs on its third. The sloppiness was a reminder of the previous week, when Brock dominated Bushland 55-7 despite uncharacteristic penalties and turnovers.

Brock’s defense, however, corralled Community from the get-go, forcing a fumble, notching a safety (its first of two safeties for the evening) and intercepting a pass in its first three visits to the field.

As the second quarter, Brock’s offense continued to stumble, fumbling on its first possession. Then, running back Cash Jones began breaking long runs, which opened up the passing game, and the Eagles uncorked its weapons in full force.

“We had some penalties there in the first half, but once we got to rolling, I thought we played really well,” Worrell said.

The Eagles appeared well on their way to a shutout, leading 46-0 midway through the third quarter. The defense, led by senior defensive end Brett Drillette and senior middle linebacker Carson Carter, had been containing Community’s offense all night when quarterback Paul Testa rolled right and heaved an 80-yard touchdown pass to Jonathon Norris.

Worrell didn’t appear too concerned about that bomb after the game.

“We gave up the long pass, but that quarterback made a heck of a throw,” he said.

Afterward, it was crickets for the Community offense and Mardi Gras times 10 for the Eagles.

Jones logged 175 yards on 15 carries and two TDs. Chris Palfreeman scored three different ways -- receiving, rushing and on defense after running back an interception 70 yards in the fourth quarter.

Next week, the Eagles have a bye before facing Iowa Park on Friday, September 18.

The Springtown Porcupines didn’t want to begin the season with consecutive losses and a 0-2 record, and that sense of urgency led the Pines to the win column on Friday night. After falling behind to Graham in the first quarter, the Pines offense scored 19 unanswered points in the second and third quarters and hung on until the end.

“I'm just proud of our kids — less about the win, more about their heart and effort,” head coach Brian Hulett said. “We have a long way to go to get where we need to be, but we are better than we were last week, and that’s what we are looking for.”

Springtown will play an away game against Connally at 7:30 p.m. Friday in Waco.

The Mineral Wells Rams hoped to improve on its strong offensive showing from Week One, which saw them scoring 40 points but still losing the game. Instead, the Rams offense scored half as many points on Friday night against Godley and fell to 0-2.

It’s tough to notch a victory when your defense gives up more than 60 points as they did at home against the Yellowjackets in the season opener and again last night against Godley.

The Rams will try to regroup and take on Venus at 7:30 p.m. Friday in another home game.

The Millsap Bulldogs offense continued to roll on Friday night, scoring 37 points against Henrietta a week after putting up 54 against Bruceville-Eddy. The Dogs defense notched its first shutout of the season to help Millsap go 2-0 overall.

“Our defense played really well,” said Tim Holloway, assistant coach. “Henrietta was a tough team, and they made some plays, but our defense always stepped up when it mattered.”

The offense started slowly but “just kept grinding and kept believing,” he said.

The Peaster Greyhounds applied steady pressure on the Alvord Bulldogs on Friday night, spreading out six touchdowns over four quarters and controlling the game from start to finish.

Quarterback Gunner McElroy relied on legs — his and running back Tramar Gilbert’s — to post 228 total rushing yards and control the game. Gilbert found paydirt five times. The running game helped overcome a tough passing night for McElroy, who threw two interceptions and no touchdowns. Receivers Hank Morris, Jayden Canafax and Zane O’Donnell caught passes but couldn’t find the end zone. Still, Peaster is undefeated in its first season of UIL 11-man football competition and appears to be having a special season.

Next up, the Greyhounds play a home game at 7:30 p.m. Frida against Collinsville.