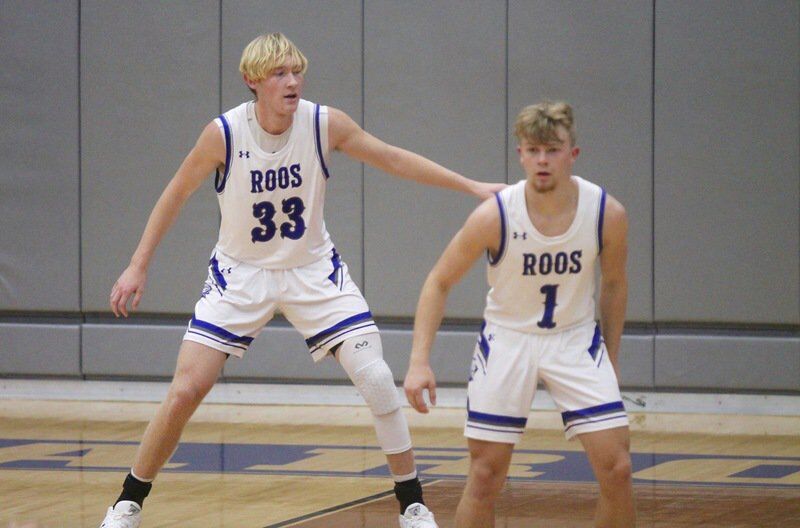 Seniors Braden Carter, No. 33, and Beau Morrison, No. 1, are intent on winning games this season. 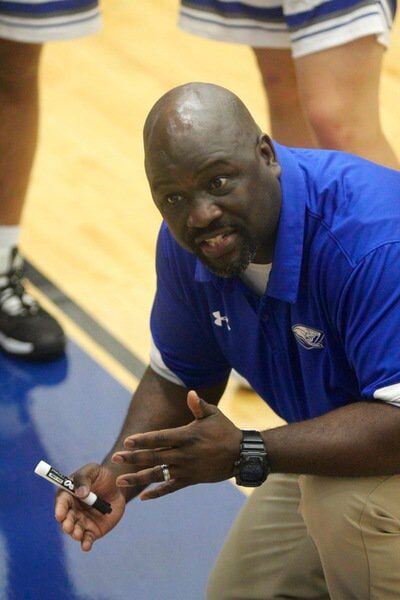 Weatherford Head Coach Jonathan Wagner is trying to instill a winning culture in the basketball program.

Seniors Braden Carter, No. 33, and Beau Morrison, No. 1, are intent on winning games this season.

Weatherford Head Coach Jonathan Wagner is trying to instill a winning culture in the basketball program.

The sound of rubber soles squeaking on a hardwood basketball court echoed through a hallway at Weatherford High School. Inside the gymnasium — one of three gyms at the sprawling facility — a dozen young men worked up a sweat running passing drills up and down the court, over and over, until most everyone was bent over, hands on knees, gasping for air.

Sweating and panting are common at the gym these days. The Kangaroos are tired of losing. They want victories and are looking to new Head Coach Jonathan Wagner to help make that happen.

“We’ve got a really hard-working team,” Wagner said on a recent afternoon before practice began. “We have a bunch of seniors who are smart and hungry to be successful. They haven’t been successful in the past. They are really coachable. I’m enjoying being with them because they want to be good.”

The seniors on the team look back with frustration at their previous two seasons, when they compiled a 2-46 record with no district wins. They haven’t won a district game since February, 2017.

Wagner hopes to instill a winning culture by giving the boys what they want — a fierce challenge.

“The first thing that we’re doing that’s different is making practices harder,” he said. “We want practices to be harder than the games, so once they get in the games, they are used to the intensity and fast pace and physicality. We are trying to get their belief system turned around and let them know that they can win games. That’s how you change the culture. It’s in the practices and the belief system.”

The boys are becoming believers.

“It hurts your confidence and makes you really not want to play anymore,” he said.

Morrison has wanted to play college ball since he was a kid but had second thoughts last year.

“I didn’t think I was good enough,” he said. “I didn’t think I would get anywhere with it. But ever since this year, I started gaining my confidence back. I really want to go to college to play basketball, and I’m working really hard for it.”

Senior power forward Braden Carter is part of a starting team that has been together for a couple of years now. Their chemistry is beginning to jell after all that court time, he said, and Wagner’s guidance is fine tuning things.

“The new coaching brings a new attitude to the team,” Carter said. “We have more faith in each other.”

Carter was red-faced and sweaty while he spoke but didn’t mind.

“We are working harder and spending more time in the gym getting better,” he said. “Our offense is a lot more efficient than it was last year. This season will go a lot better than it did last year and the year before that. It’s an attitude. We are coming in knowing we are going to win instead of thinking it might happen.”

Carter believes the team can reach the playoffs.

“We just have to work together, play hard and take care of business,” he said.

The team is composed of seven seniors, two juniors and three sophomores. Several players, however, are members of the football team and won’t join basketball until after the gridiron playoffs end — about the time district games begin in basketball.

Even while missing players, the Roos are making a statement. They won three of four scrimmages in the preseason and have started the regular season at 2-0, beating Wichita Falls and Burleson handily.

“We have the talent to win,” Wagner said. “The seniors’ basketball IQ is sharp. We don’t have much size, but we can be smart and use angles and stuff like that, and we’ll be fine.”

Morrison likes the feeling. He has played basketball since he was 6 but never been on a winning team or participated in a playoff game.

“It’s been really tough,” he said. “This year, I’m hoping for the best. We have a shot to make it [to the playoffs] and maybe win a game or two. Obviously our goal is to win the whole thing. That would be great for my senior year and a really good accomplishment.”

Wagner came to Weatherford from Wichita Falls, where, for one season, he coached a team that had been losing badly for years and helped them win six games and come close to making the playoffs. Wagner earned his 300th career win at Wichita Falls. Most of his wins have been earned at schools in North Texas.

Wagner graduated from Keller High School in 1991 and spent most of his 25 years coaching in this area. In 2012, his Arlington Heights team made it to the state semifinals. Wagner led them to the playoffs in six of his seven years at the school.

He also coached at the college level for four years with stints at Texas Wesleyan and Navarro Junior College.

He and his wife, Shirley, wanted to move back to North Texas to be closer to family, and Weatherford was a good fit, he said.

The junior varsity team is stocked with talented sophomores, and the Roos could be contending for playoff spots for a while, Wagner said.

“These kids at Weatherford really work hard,” he said.