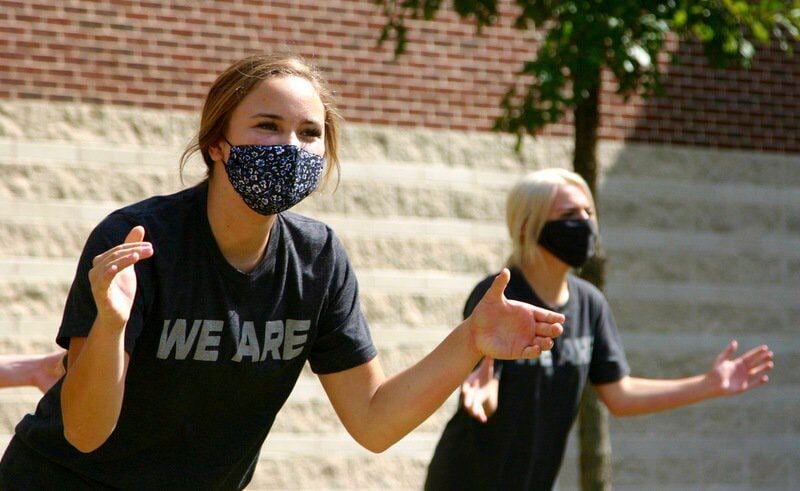 From left, a mask can’t hide Jenna Tuley’s enthusiasm as she and Kyla Foushee work on a drill. 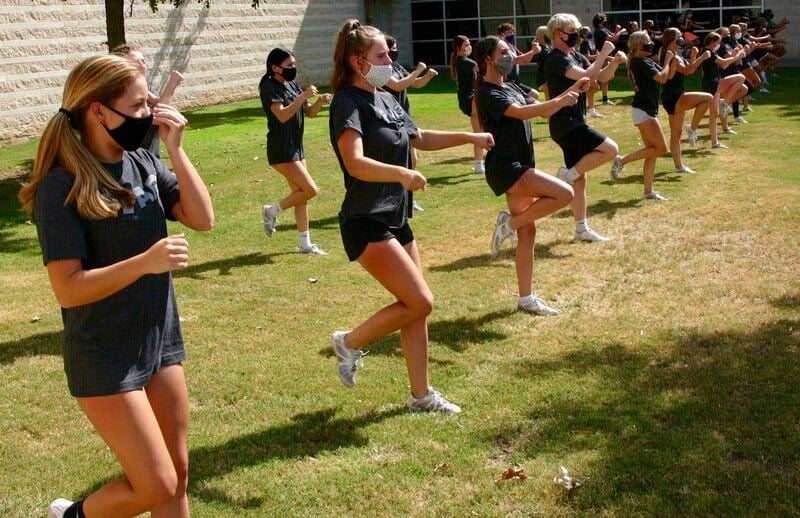 From left, a mask can’t hide Jenna Tuley’s enthusiasm as she and Kyla Foushee work on a drill.

Now cover your nose and mouth with a thick mask on a hot, muggy August afternoon and try it.

Or, more accurately, not OK.

Masks can make it more difficult to breathe, and sucking wind isn’t the only thing adversely affected.

“You have to yell louder with the mask so people can hear us,” said Kamrey Mullens, a senior cheer captain at Weatherford High School. “The masks are complicated, but we still get to cheer.”

Welcome to cheerleading 2020, a surreal world where peppy girls and boys perform choreographed, difficult and sometimes dangerous stunts and chants to motivate their teams and entertain crowds while also wearing face coverings and practicing proper distancing to prevent the spread of COVID-19. The audiences they try to rile up each week will be fewer in number. The University Interscholastic League, which provides extracurricular academic, athletic and music contests, wants 50% percent capacity in stadiums to allow for distancing. New UIL guidelines restrict cheerleaders from mixing with drill teams and marching bands and limit their access to the field. The Universal Cheerleaders Association has recommended more signs be used instead of yelling into megaphones.

Numerous adjustments will be required whether a cheerleader, athlete, band member, coach, spectator or whomever. Still, nobody was whining during a recent cheer practice on a grassy lawn outside of the gymnasium at Weatherford High School. Cheerleaders are hardwired to promote fun rather than moan about pandemics.

“It’s different with all the restrictions, but I’m just happy we get to cheer,” said senior Megan Marshall, also a captain. “It hasn’t been too bad. Everyone on the team has taken the adjustments and been able to fit it into everyday practice.”

The team’s third captain, Emily McSwain, had worried her senior year of cheer might be lost if the football season were scrapped altogether rather than delayed.

“I’m just happy we still get to cheer despite all of the conditions,” she said. “It’s going good. We’ll have the best football season that we can this year.”

Weatherford’s previous cheer teams have traveled to distant universities to train at camps and compete against other teams. This year, those plan were cancelled.

“That’s really the thing we missed out on more than anything.,” said cheer coach Casey Watson. “We are used to competing against the other teams and kind of seeing where we compare at the beginning of the season.”

Weatherford’s team attends UIL competitions on the state and national level and relies on the camps to gauge cheerleaders’ abilities. In typical lemons-to-lemonade style, Watson’s bunch of eager cheer mongers participated at an in-school camp instead.

“We had really dedicated attention because we had instructors coming to us, and it was just about our program instead of having to share that time with other teams at camp,” Watson said. “That was a positive. It was a really good camp, and the instructors were fantastic.”

The team could have used the competition, however, because Weatherford has switched to co-ed this season for the first time. Almost 60 students participate in cheer, although fewer than half are on varsity. Four of those varsity members are boys.

“They’re strong,” Watson said. “We love having them on the team. They are nice and loud. It adds another depth to the team.”

Boys have cheered on previous teams, but never more than three at a time at Weatherford. Competing as a co-ed team requires at least four boys.

Last year, the Roos team finished ninth at state competition. This year, they’ll try to improve on that rating as a co-ed group.

“We have to switch divisions, but we’re excited because [the boys] are a part of it and definitely add something awesome,” Watson said.

Other cheer teams in Parker and Palo Pinto counties are adapting to similar challenges. At Millsap, cheer coach Tracy Burchette said her team is doing whatever is required to allow them to pump up crowds at Bulldogs games.

“Everybody has been compliant,” she said. “We know that if we want to cheer, this is what we have to do, and that’s what we’re going to do.”

Her team wasn’t able to begin practicing until late July, giving them a late start at preparations. Pep rallies, normally held inside the gym, will be held on the football field to allow for distancing, she said.

“But we are still getting to have [pep rallies], so that’s a plus,” Burchette said.

Friday Night Lights are glowing brightly once again, and you know what that means to a cheerleader: “Big G, little O. Go! Go!”