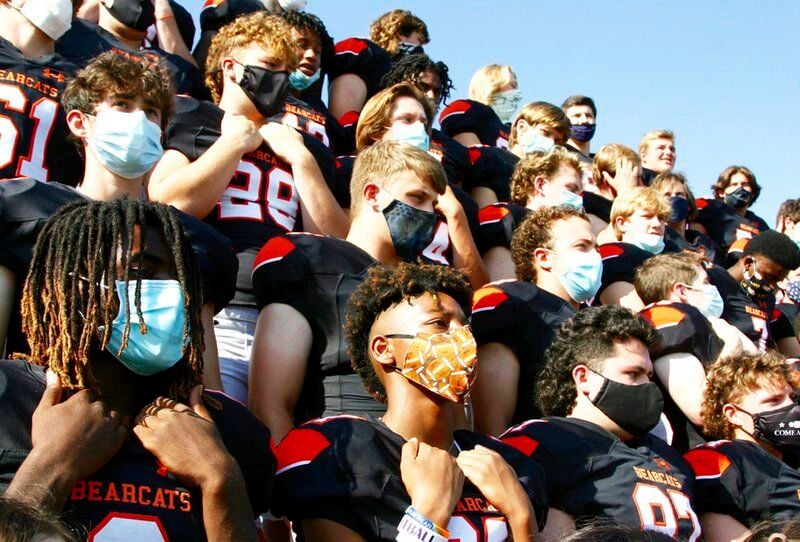 The Aledo Bearcats will get to go full speed in full pads (and masks) on Saturday after months of limited drills and practice. 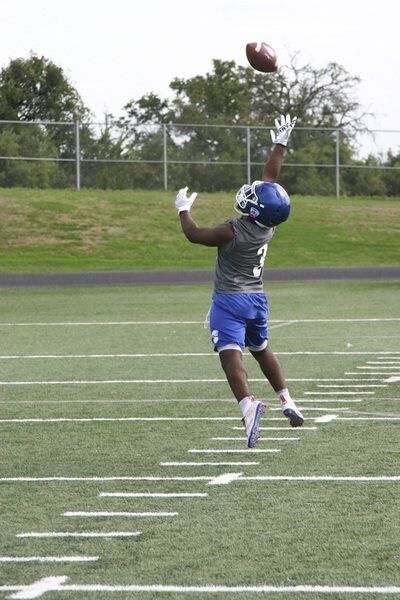 Weatherford senior Dez Forrest makes a grab for a high pass in a helmets-only practice earlier this week. 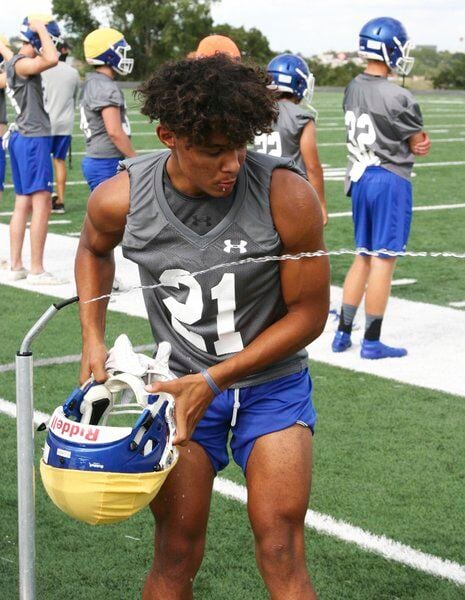 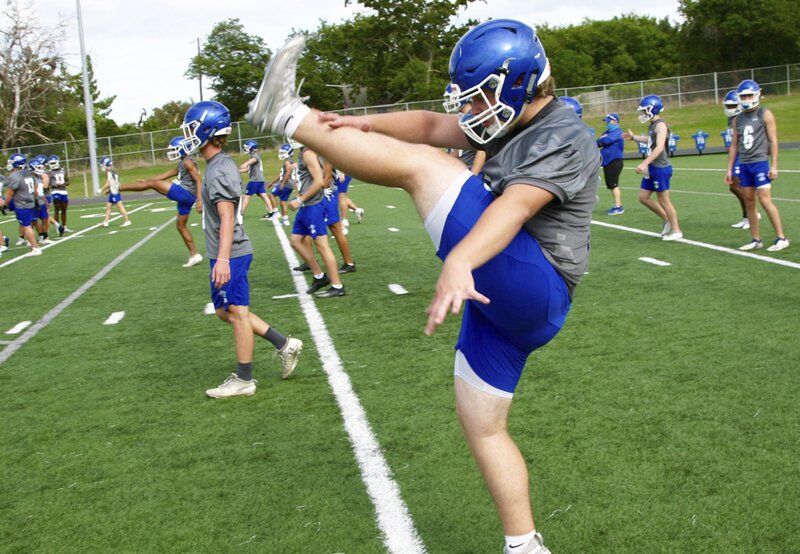 Weatherford junior Ethan Woodruff and his teammates work on stretching drills before a recent practice.

The Aledo Bearcats will get to go full speed in full pads (and masks) on Saturday after months of limited drills and practice.

Weatherford senior Dez Forrest makes a grab for a high pass in a helmets-only practice earlier this week.

Weatherford junior Ethan Woodruff and his teammates work on stretching drills before a recent practice.

That glow is about to become brighter.

COVID-19 delayed the football season at larger schools for a month. Now the big boys at 6A Weatherford and 5A Aledo are preparing to pull on their game jerseys and take the field on the final weekend of September. Joining them on the late start will be two private schools — Trinity Christian and Weatherford Christian.

“It was nice to get everybody in and get going,” said Billy Mathis, athletic director and head football coach at Weatherford. “The kids were excited. The weather was nice. The coaches were excited.”

In previous years, the Kangaroos would have had 18 practices during spring and held two-a-days in August. This year, that didn’t happen. Instead, large schools followed University Interscholastic League guidelines and delayed seasons and suspended practices. Coaches were allowed to spend an hour a day on strength and conditioning drills with players but without pads or organized practices.

Weatherford will hold its first full-contact football practice on Sept. 12, and plays its first scrimmage on Sept. 17. A little more than a week later, the games begin.

In a normal year, the Roos would be preparing for their third game of the season by now.

Weatherford and Aledo open their seasons by butting heads with one another at 3:30 p.m. Saturday, Sept. 26 in Arlington. Weatherford has made the playoffs for the past two seasons but went one-and-done both times. The Roos hope to go deeper this year.

“We’ve got a lot of young guys coming back,” Mathis said. “We’ve got three weeks to get it done. I wish we had longer. We’ve got to take it one day at a time and keep focusing on us and getting everybody ready to go out and execute what we do.”

Aledo head coach Tim Buchanan is downplaying the late start to the season and the diminished practice times, and instead is focusing on things he can control. Since June 8, he and other coaches have been able to hold limited strength and conditioning drills. On Monday and Tuesday, the kids were able to practice in helmets for the first time. On Wednesday and Thursday, they wore helmets and shoulder pads. On Friday, they wore full pads but were not allowed to block or tackle to the ground.

The abbreviated preparation times and delayed seasons have required coaches and players to make adjustments, but nothing too cumbersome, Buchanan said.

“Nothing has really changed other than we have to wear masks and stay six feet apart when we’re not playing, and starting a month later,” he said.

Mathis is practicing what he preaches to his athletes — when life or football puts obstacles in your path, adapt and keep moving, he said.

“Part of being a coach is adjusting,” Mathis said. “You have to adjust and go. Everybody else is on the same playing field. We just have to make the best of our time.”

Both teams are predicted to have successful seasons. Dave Campbell’s Football guide predicts the Kangaroos will finish second behind Euless Trinity in district play but make the playoffs. The Roos need to shore up their defense and find a replacement for former quarterback Ken Seals, now playing at Vanderbilt.

Campbell picked the Bearcats to win their district again and sail into the playoffs and contend for the state title again. Dynamic all-around athlete JoJoe Earle is poised to take the team in that direction, whether playing quarterback, running back or receiver.

Neither Aledo nor Weatherford will enjoy home field advantage when they meet in the season’s first game. They face each other at Globe Life Park in Arlington, the former home of the Texas Rangers and now a multi-use facility. Buchanan and many of this players visited the stadium last year and were allowed to walk on the field and soak in the scenery, perhaps de-mystifying the place and putting them more at ease when they play the Kangaroos on the 26th.

“All fields are the same length and same width,” Buchanan said. “It won’t make a big difference. The majority of our kids got to go there and watch an XFL game and got to be on the field. To them, it looks like a football field.”

Also eager to jump into the football fray is Trinity Christian. The Eagles play their season opener against Lake Country Christian at 7:30 p.m. Friday, Sept. 25, at home. Eagles coach Joe Hamstra plans to make the most of his shortened time to prepare his players to compete in a difficult district race.

“Our district is really good,” Hamstra said. “Everybody in our district has been a playoff team. Two teams went to the state finals a year ago. The other two went to the quarterfinals, and one went to the semifinals.”

He and his players are ready to redeem themselves after a dismal 1-10 season in 2019.

“I feel like we’re going to be competitive,” Hamstra said. “Everybody right now is 0-0. If we can stay healthy and our chemistry is right, I feel like we have a chance to piece things together and have a good year.”

Proving whether or not the Eagles can be competitive requires putting a team on the field. The pandemic made even that simple task more difficult than ever before.

“I’m just glad to be playing,” Hamstra said. “There were times I wondered if we were going to be able to play. We’re not playing a full schedule, but I’ll take what we got.”

A shortened schedule at Weatherford Christian means the Lions play eight games this season, beginning with the season opener against Central Texas Christian at 7 p.m. on Friday, Sept. 25, at home. The Lions are transitioning from six-man to 11-man football this year and are fielding a young and relatively inexperienced team. Campbell predicted the Lions to finish last in their district race.

To make matters more difficult, the pandemic delayed construction on the school’s stadium, meaning the Lions won’t have a home field to play on until 2021.

Head Coach Stephen Cox is eager to overcome those and other hurdles and prove wrong any detractors.

“We’ve never been known to shy away from anything,” he said.

That quote makes a fitting mantra for most everyone participating in the season of 2020.