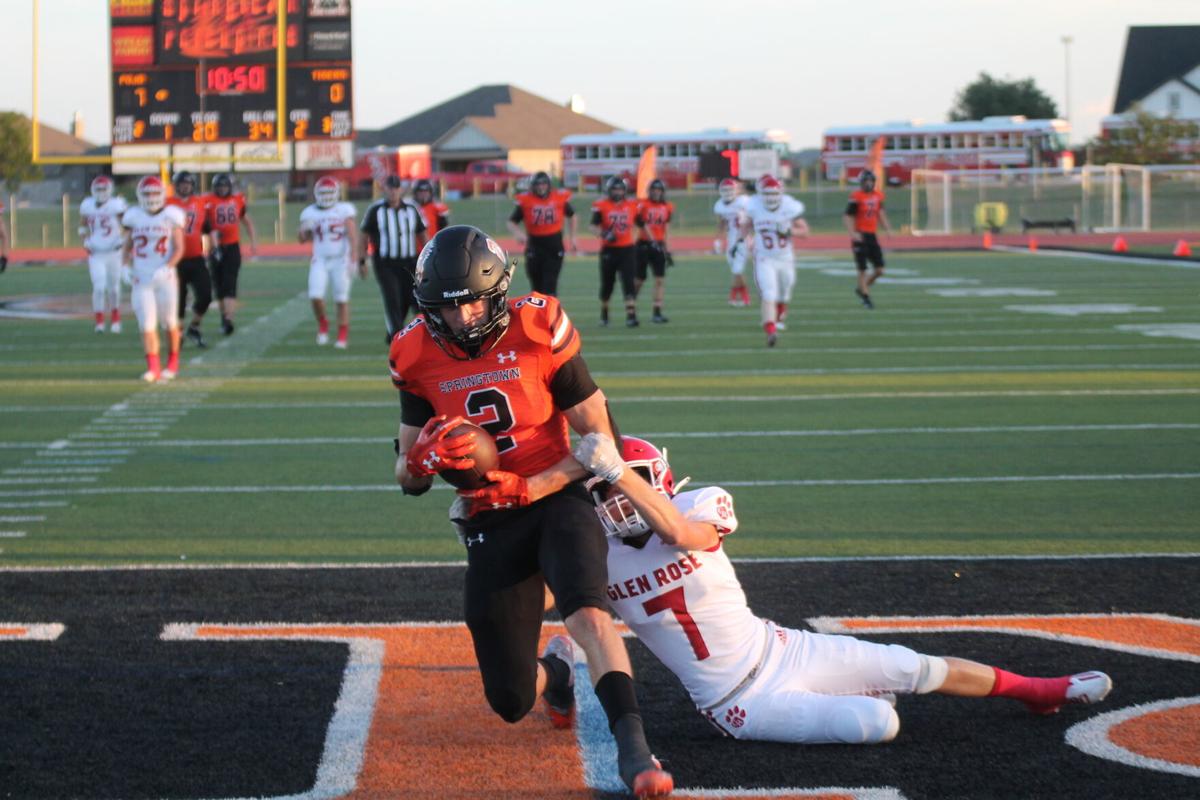 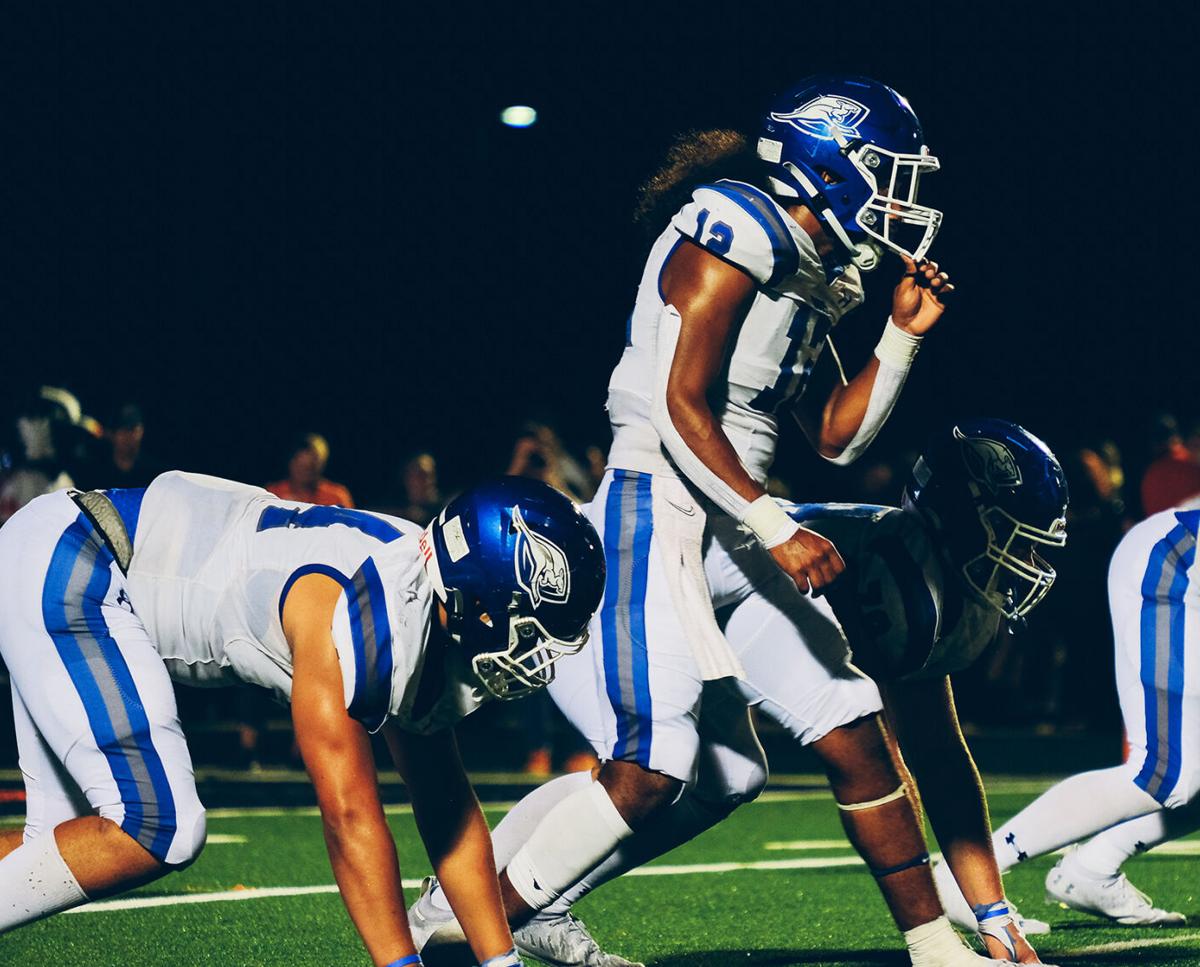 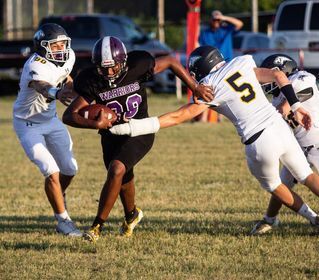 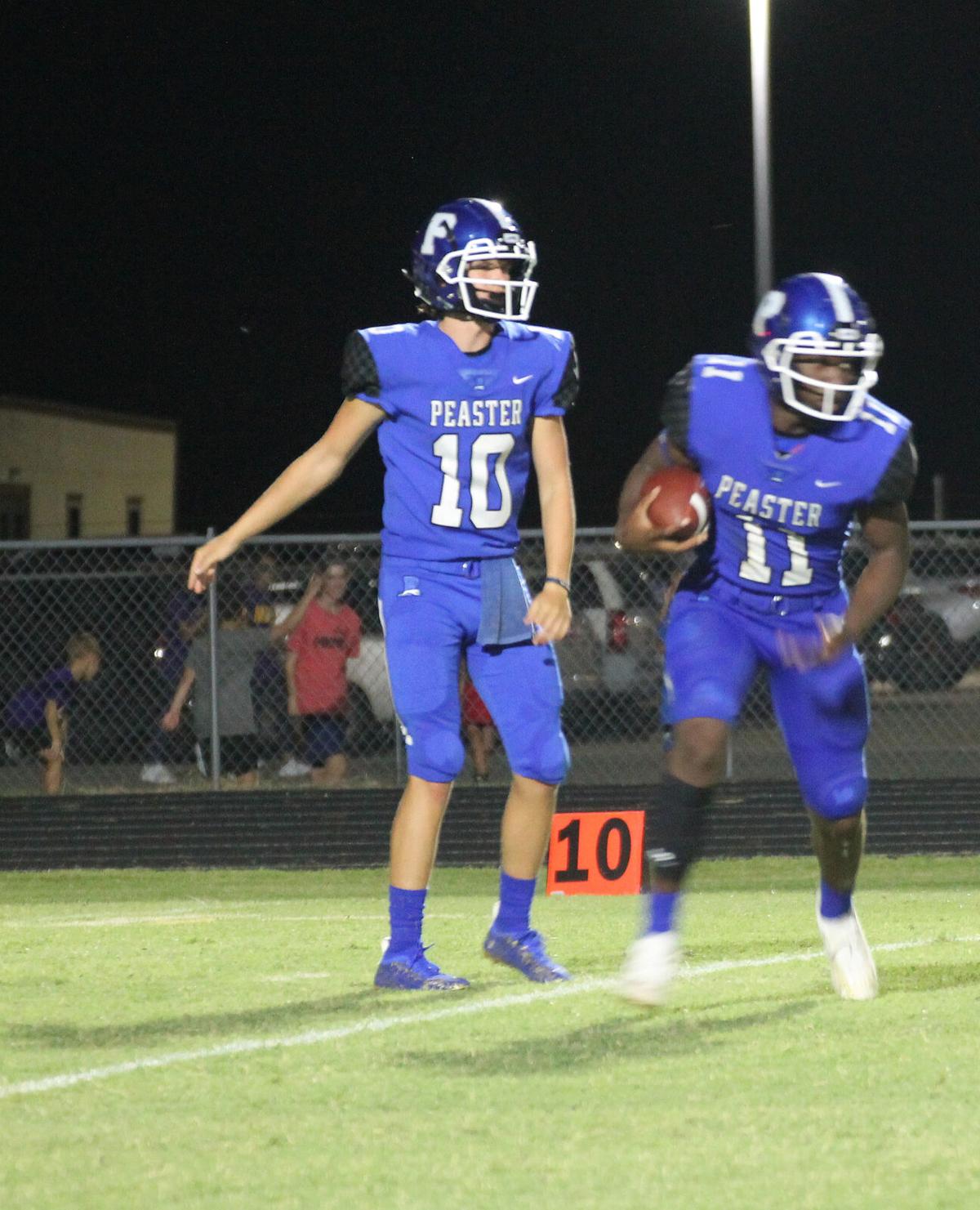 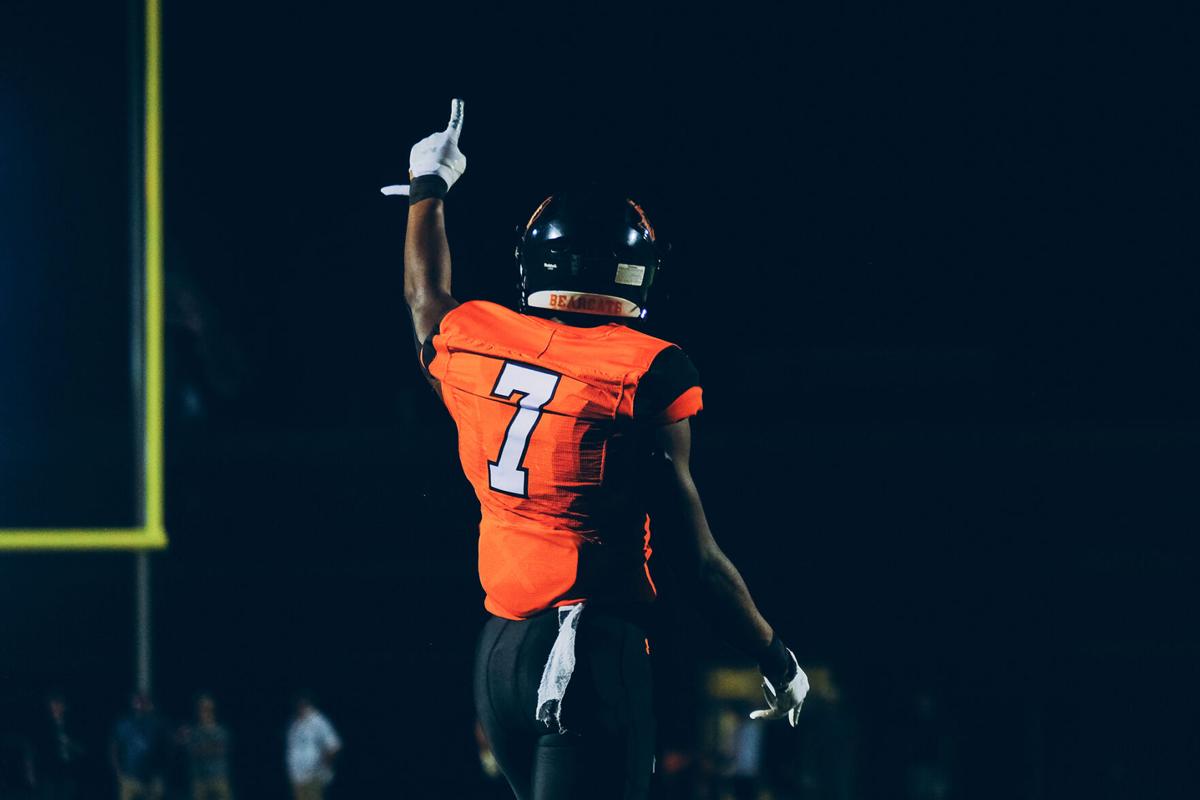 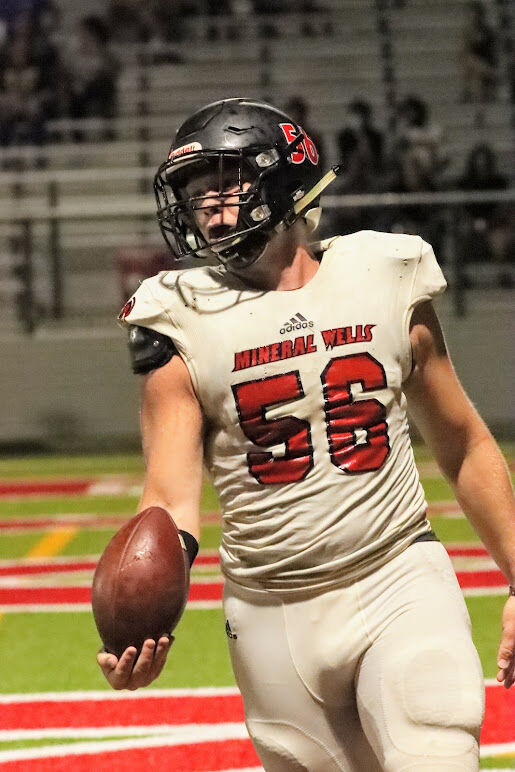 WEATHERFORD — With Week 1 under their belts, teams in Parker and Palo Pinto counties are gearing up for the next week of competition.

The Aledo Bearcats were triumphant Friday night against their county foes in Weatherford, coming away with a 47-7 win at Bearcat Stadium.

Weatherford’s CJ Thornton was the lone scorer for the Roos, with a 1-yard run in the second quarter.

Next up, Aledo will take on Lone Star in Frisco Thursday with kickoff at 7 p.m.

The Roos will look to rebound against the Crowley Eagles in their home opener. Kickoff at Kangaroo Stadium is set for 7:30 p.m. Sept. 3.

Mineral Wells came away with the win in a nailbiter against Castleberry Friday night, outlasting the Lions, 34-28.

The Rams held a six-point lead at halftime, 27-21, adding another touchdown in the third to match Castleberry’s. It was enough to hold them over, as the Mineral Wells defense, which came up with huge stops, including a 30-yard fumble recovery for a touchdown in the first quarter, held Castleberry scoreless in the final period.

The Rams will have the full support of their home crowd Sept. 3, as they host Western Hills on homecoming. Kickoff begins at 7 p.m.

The Millsap Bulldogs may have gotten the 41-6 victory over Bruceville-Eddy on the scoreboard, but some may argue a bigger “win” came before the opening kickoff.

Several of the players entered the stadium outside of Waco carrying flags with the U.S. Marine Corps symbol, a tribute to the fallen service members killed in an attack at the Kabul, Afghanistan airport.

The Bulldogs put the hammer down early, taking a 26-0 lead against the Eagles after the first quarter.

Millsap added another scoring drive in the second, and the Bulldog defense remained stingy for three solid quarters before Bruceville-Eddy could get on the board.

Millsap added eight points of their own to match the Eagles’ six in the final period.

The Peaster Greyhounds were able to switch up their scheme last week after switching up opponents.

The Greyhounds decimated Munday, coming away with a 58-0 win on their home field.

Peaster’s offensive was, in a word, unstoppable, with quarterback Gunner McElroy throwing for 207 yards and four touchdowns (three to Brody Williams and one to Caden Duer) on 17-of-21 passing.

Scoring duties were split between McElroy and running back Tramar Gilbert, who finished with seven carries for 165 yards and three touchdowns. Luke Wiley added a rushing score of his own.

The Brock Eagles put up more than 300 yards of offense to propel themselves ahead of Bushland Friday night, getting the 31-3 win.

A field goal by Brody Baker tied the contest at 3-all at the end of the first, but Brock quickly found its footing, specifically the foot of quarterback Tyler Moody. A 1-yard run in the second and 5-yard run in the third quarter saw the game get out of hand, as the Eagles took a 17-3 lead. Moody would finish with 11 carries and 33 yards, and 8-of-12 passing for 160 yards.

Jake Lindberg opened up the fourth, finding room to carry the ball 36 years into the end zone. Kutter Wilson completed the ground game for the Eagles, scoring about five minutes later from 1 yard out. He would finish with a team-high 109 yards on 19 carries, to go along with three catches for 90 yards.

The Springtown Porcupines were the definition of “Pojo Magic” in their win against Glen Rose Friday night, 37-7.

The Porcupines took a nearly insurmountable lead at the half, after an interception for a touchdown to make it 30-0.

Springtown continued to pour it on, with the defense holding the Tigers scoreless until the mid-fourth quarter.

The Porcupines hit the road to take on Graham Sept. 3 at 7 p.m.

A big defensive stand in the third quarter proved to be the difference Santo needed Friday night, beating Rio Vista in a squeaker, 14-12.

Santo led 8-6 heading into halftime, but the Eagles took the lead midway through the third quarter. Attempting a two-point conversion after the score, Rio Vista was stuffed by the Wildcats, a moment that would eventually be the difference.

Sam Henderson punched the ball in from the 5-yard-line with about eight minutes to go, and Santo hung on the rest of the way to claim its first win.

The Wildcats will host Valley Mills Sept. 3 with a 7 p.m. kickoff.

The Strawn Greyhounds routed White Deer on the road Friday night, coming away with a 56-8 win.

The Greyhounds did the bulk of their damage in the first half, leading 50-8 at halftime.

The Gordon Longhorns blew out O’Donnell Friday night, finishing with a 66-20 win.

Next up, the Longhorns travel to take on Newcastle Sept. 3. Kickoff is scheduled for 7:30 p.m.

The Weatherford Christian Lions roared back from an early deficit, putting 19 points on the scoreboard in the final quarter to beat Central Texas Christian, 33-12.

Down 12-0 after the first quarter, Hunter McCoy came up big for the Lions, scoring on a 4-yard run and adding a 50-yard interception return to put Weatherford Christian on top, 14-12 at halftime.

The Lions play Brooks Academy of Science & Engineering on the road Sept. 3 with a 7:30 p.m. kickoff.

Perrin-Whitt is looking to avenge a Friday night loss to Gold-Burg, 44-16. The Pirates will host Jonesboro Sept. 3 at 7:30 p.m.

Trinity Christian Academy wasn’t able to play its Friday game against Peaster, but the Eagles are looking forward to a 7:30 p.m. kickoff Sept. 2 against Westlake Academy. The game will be played at Godley High School.