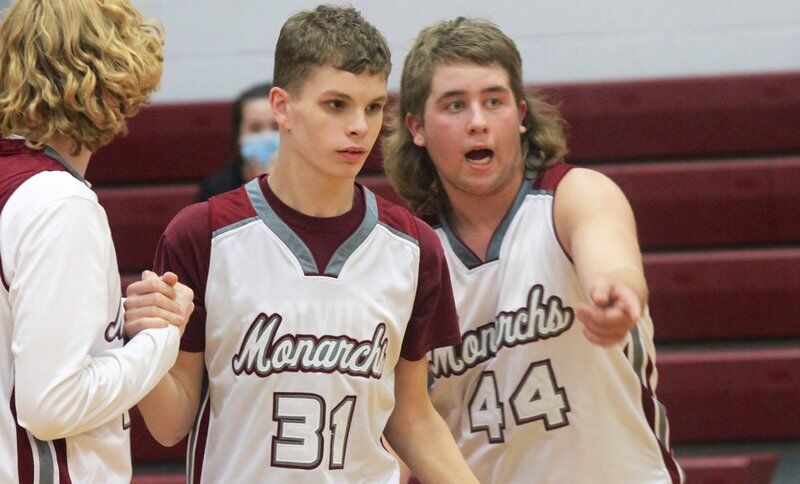 T.J. Stewart, left, and Gustus Gammill, right, congratulate Allen Howell after he sank a basket during the Hirschi game on Tuesday. 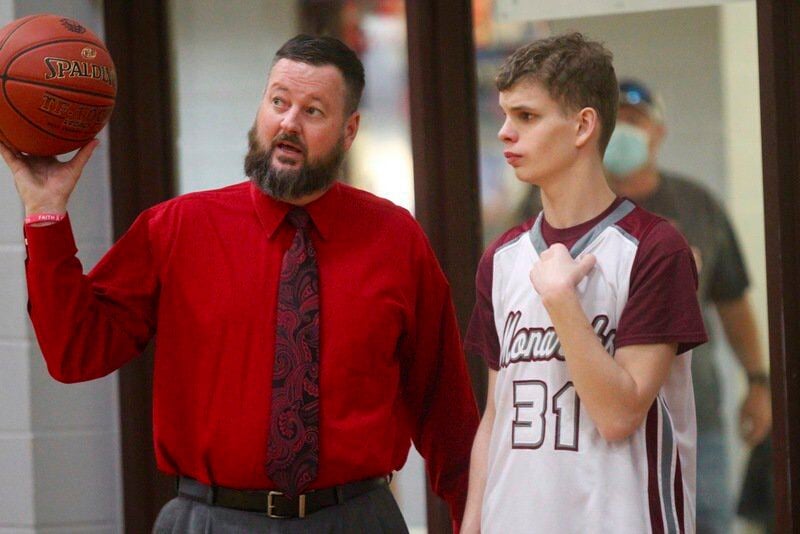 Coach Steven Stegall talks to Allen Howell about shooting baskets prior to the Hirschi game.

T.J. Stewart, left, and Gustus Gammill, right, congratulate Allen Howell after he sank a basket during the Hirschi game on Tuesday.

Coach Steven Stegall talks to Allen Howell about shooting baskets prior to the Hirschi game.

With 1:12 remaining in the first half, Poolville’s junior varsity basketball team was up 29-13 during a home game against Hirschi earlier this week. Poolville Head Coach Steven Stegall told Allen Howell to hustle into the game and make a basket before the buzzer.

Howell made his way onto the court, a bit timid perhaps but with a determined look on his face. The referee blew the whistle for play to resume, and a Poolville player inbounded the ball to Howell. The 17-year-old first-year basketball player took a shot but missed. One of his teammates grabbed the rebound and tossed the ball back to Howell, who sent it flying toward the basket.

Again, the ball bounced off the rim.

Another rebound was tossed his way, and Howell’s aim was true on his third attempt. Howell’s teammates clapped and gave him high fives, and the hometown crowd erupted as they always do whenever Howell makes a court appearance. Applauding just as loud were Hirshi’s players and visiting fans.

Afterward, a smiling Howell returned to his familiar spot -- sitting next to Stegall on the bench and rooting for teammates.

“He is a member of this team as long as he wants to be,” Stegall said after the game.

Howell has attended other schools in the past, but his autism made it difficult for him to fit in at times. A year ago, he told his parents, Erica and Ricky Howell, he wanted to play basketball.

“He wanted to be a part of a team and feel like part of the team,” Erica said.

They looked into Poolville, a 2A school with a strong basketball program and a well respected coach. Stegall, selected as 2A Coach of the Year by the Texas Association of Basketball Coaches in 2019, has played other special needs kids in the past.

“We went to Poolville and met with them and Coach Stegall,” Erica said. “We walked through the school, and [Stegall] looked at me and shook my hand and looked at Allen and shook his hand and said, ‘I promise I will make him a part of our team.’ They got him on the basketball team within three weeks of school. We didn’t have to beg.”

Stegall spent extra time working one-on-one with Howell, teaching him to dribble, run up and down the court and catch a ball. The additional effort was well worth it, Stegall said.

“Every kid deserves a chance to play,” he said. “Allen deserves the same opportunity as every other kid.”

The effort would have failed, however, unless the other kids on the team were on board.

“Our kids here at Poolville are really good at including everybody,” Stegall said. “There are not any cliques. The guys wanted Allen to play. His personality is great, and they want to include him. It’s not difficult at all to make a decision to help somebody out.”

So far, Stegall has sent in Howell during home games only. Before each game, he calls the opposing team’s coach to ask permission to stop the clock for a few minutes to allow Howell to go on the court and make a basket, which isn’t counted on the scoreboard. No coach has refused.

“Coaches are a great fraternity of people,” Stegall said. “They all get it. We’re all trying to help the kids out.”

Howell’s father, Ricky, has seen a change come over his son since he joined the team. The kid kept to himself and talked mostly about ninjas and cartoons.

Now, “he has a lot more confidence and talks about regular real-life things, his buddies on the basketball team and Coach Stegall,” Ricky said. “Used to, he would keep to himself and not talk a bunch. Since he has been part of the basketball team, he is always talking.”

Stegall was the first public school coach to take time to focus on Howell, Ricky said. The boy responded by acting more his age.

“Being a part of this team, he started acting more like a teenager rather than a 5- or 6-year-old,” Ricky said.

Howell is receiving similar attention from teachers helping him in life-skills class and culinary training. After graduation next year, Howell wants to work as a cook, preferably at a pizza place. His experiences on the basketball court will help make that happen, his parents said.

“The confidence for Allen is phenomenal,” Erica said. “Allen used to walk around with a smile, but he always smiled at the ground. He was very unsure of his decisions.”

During those early practice sessions, Howell struggled. He shrank from the ball. Objects coming at him quickly can startle him, as do loud noises inside the gym, such as buzzers and whistles.

“It was part of his autism,” Erica said. “This has taught him how to work better with a team. Most autistic kids have a really hard time interacting with a group of kids and being in a louder environment.”

Stegall’s patience with Howell, along with help from his teammates, helped the boy overcome those hurdles.

“His hand-eye coordination has increased — it’s amazing,” Erica said. “This has made him come outside of his shell so much. This will help him in the future, where he will actually be able to get a job and communicate with people better.”

After the game against Hirschi, Howell was all smiles as he recalled sinking his basket with a little help from his friends.

“Basketball is very cool,” Howell said. “I like my team.”

The team digs him, too, said Gustus Gammill, his closest buddy on the Monarchs JV.

“Allen brings great happiness to the team,” Gammill said. “Any time Allen comes on the floor, everybody gets cheered up. It brings the team together.”