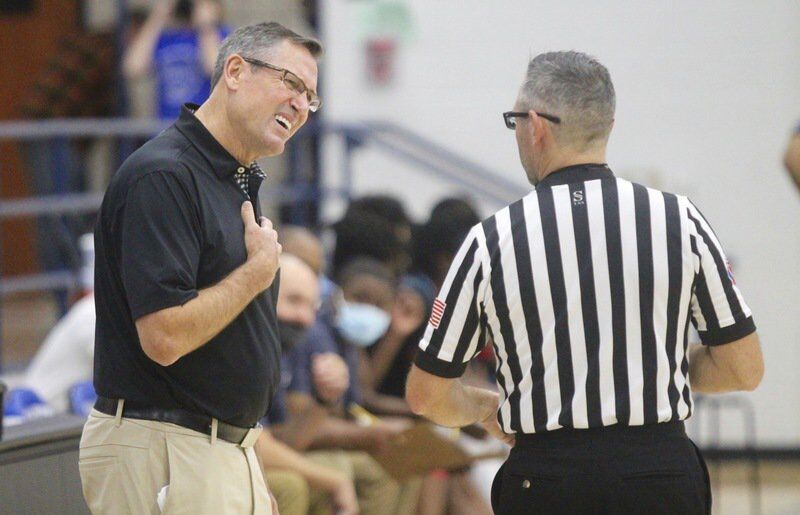 Peaster Head Basketball Coach Bubba Jennings talks to a referee about a call in a recent game. 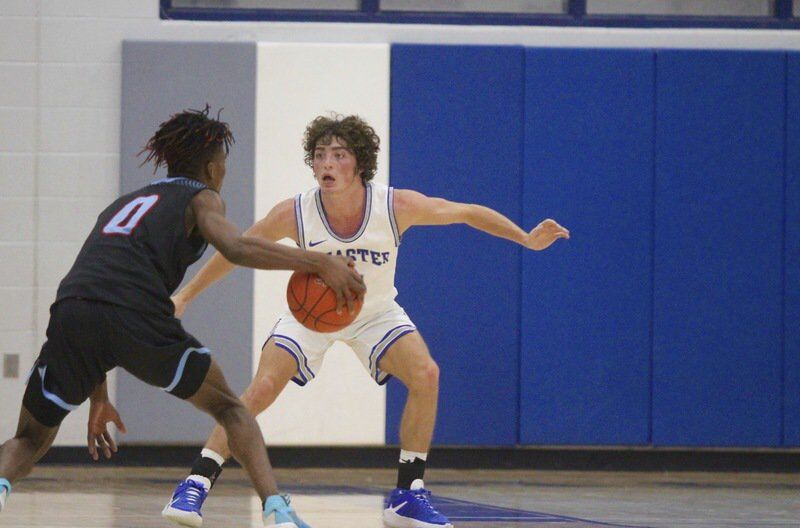 Peaster guard Major Glenn plays with the same intensity that his coach, Bubba Jennings, displayed during an amazing high school and college career. 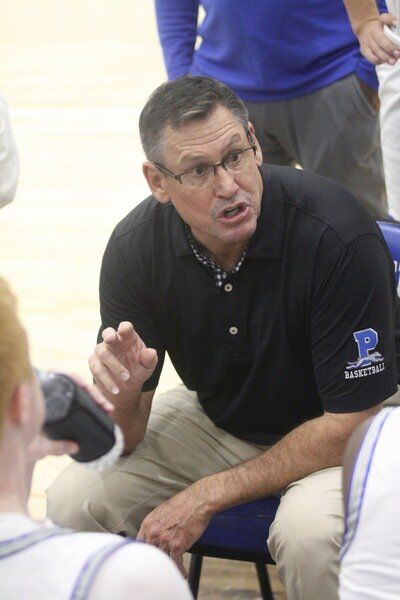 Bubba Jennings' intensity is evident during timeout talks with his team.

Peaster Head Basketball Coach Bubba Jennings talks to a referee about a call in a recent game.

Peaster guard Major Glenn plays with the same intensity that his coach, Bubba Jennings, displayed during an amazing high school and college career.

Bubba Jennings' intensity is evident during timeout talks with his team.

Bubba Jennings was walking toward his office at Peaster High School after watching his boys basketball team defeat Hirschi in the home gym, but he wasn’t done coaching for the night.

The head coach offered unsolicited advice to a kid of about 8 who was bouncing a basketball in a school hallway.

“You will tear up the ball if you bounce it on anything but a basketball court,” he said. “It will become slick and worn out.”

Jennings wasn’t angry but spoke firmly. The boy stopped dribbling, clung tight to the ball with both hands against his chest and listened with wide eyes as the coach spoke.

Jennings can be direct. As a coach, he is intense. He was that way as a player, which helped propel him to All-State honors in high school and a sterling career at Texas Tech University. As a Red Raider, he led his team in scoring for three of his four seasons and led twice in steals and assists. Those stats paint a picture of an impassioned player flying all over the court.

Jennings makes no apologies for his fierce approach to the game.

“I’m a very competitive person,” he said. “When the ball goes up, I want everybody doing the very best they can do. If they’re not doing the best they can do, they’re going to hear about it — and it doesn’t matter if it’s the referee, the scorer’s table or my team. I want everyone to have the same intensity and approach to the game that I have.”

The Dallas Mavericks drafted him after he graduated from Tech in 1985, but Jennings played overseas a couple of years then gravitated to coaching. As head coach at Artesia High School in his home state of New Mexico, his teams won two state titles. (Jennings is a member of the New Mexico Sports Hall of Fame.)

After head coaching stints at two high schools, Jennings returned to Texas Tech as an assistant coach for 11 years, most of them under famed Head Coach Bobby Knight, another guy known for intensity.

After more than a quarter century of coaching, Jennings left the profession in 2013 and began working at First Bank and Trust in Lubbock. Toiling for five years as a loan officer convinced him to return to coaching, but not as an assistant.

He wanted to lead a team again.

His wife, Jackie, grew up in Arlington, and both of them like the North Texas area, and so Jennings began seeking a job here.

Peaster, a basketball town to the core, jumped at the chance to nab such a proven winner with a long pedigree. In his first year at Peaster, Jennings led the Greyhounds to a second place finish with a 12-2 record in district. The team lost its first playoff game to Childress.

Last year, the team finished in first place with a 13-1 district record and went six games deep into the playoffs before losing in the semifinals.

How will this year’s team fare?

Four of the five starters who led the Greyhounds to the semifinals last year are back on the court in 2020 and better than before, the coach said.

The seniors include gym rat Braxton Bosher, who spends hours a day working on his game; the short, scrappy Major Glenn, who might even match Jennings for intensity on the court; Carver Rodenburg, a hard-nosed rebounder; Jayden Canafax, an aggressive athlete who doubled as a football standout this year; and Steele Pennington, the defensive stopper with phenomenal skills.

Younger players making themselves known include Noah Drenth, the 6-foot 6-inch junior who played on the JV team last year but has improved tremendously, and sophomore Tramar Gilbert, an aggressive, physical presence on the court.

They’ve all faced the Jennings glare, heard the yells from the sidelines, listened while the coach demands to know why they did this or why they didn’t do that. Peaster has grown accustomed to winning basketball games, and the players know Jennings can continue to make that happen if they embrace the system.

“They take coaching well and let me get all over them,” Jennings said. “When they are making mistakes, sometimes I ride them pretty hard. They take it.”

“I love them to death,” Jennings said. “They are just like family to me. I spend a lot of time with them and want to teach them to be the best they can be so that they can take what they learn on the basketball court and apply it to the rest of their lives, whether it be a relationship, a job or whatever it is.”

Part of Jennings’ system requires packing the non-conference portion of the schedule with the fiercest teams available. The Greyhounds lost two of their first five games, but the losses came against much larger schools, including Abilene, a 6A team that finished with a 10-2 record in district play in 2019.

“I just like them to play against competitive teams,” the coach said. “I’ve always learned a lot more from a loss than a win. It makes us all focus a little better and be more engaged with what’s going on when you get beat.”

Those kinds of games provide a reservoir of mental and physical toughness that can be drawn upon during district games, the coach said. This year, the reservoir has been needed more than ever.

The pandemic prompted the University Interscholastic League to cancel all tournaments other than the state finals. In the past, playing tournaments allowed teams to travel, play numerous games back to back, overcome weariness and forge close bonds.

“You can learn a lot when you can go through that,” Jennings said.

Basketball, when coached and played the right way, teaches a lifetime of lessons.

“I tell the kids, you’ve got to enjoy every single day,” he said. “You’ve got to make every day great — great on the basketball court, great with your family, great with your friends. None of us knows — especially in these times — what is going to happen tomorrow. I’m just so happy we get to play right now. During these uncertain times, we’re just trying to make the best of every single day.”