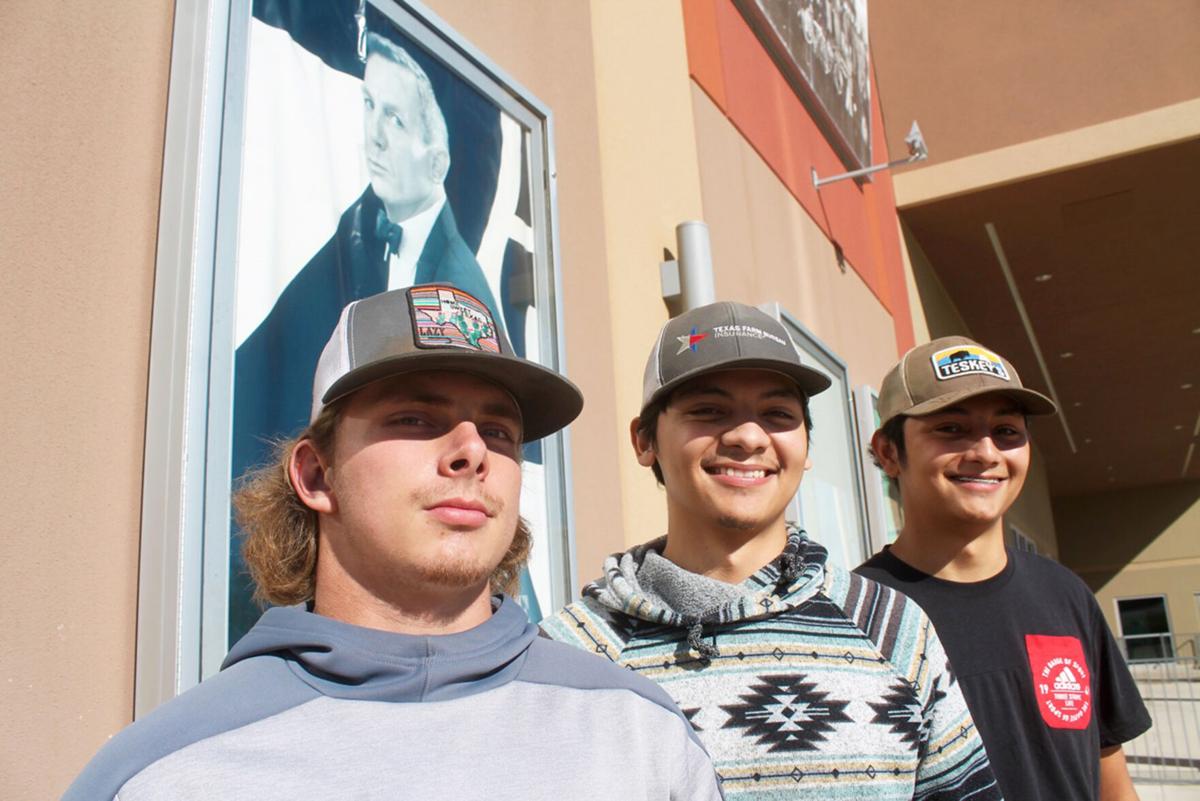 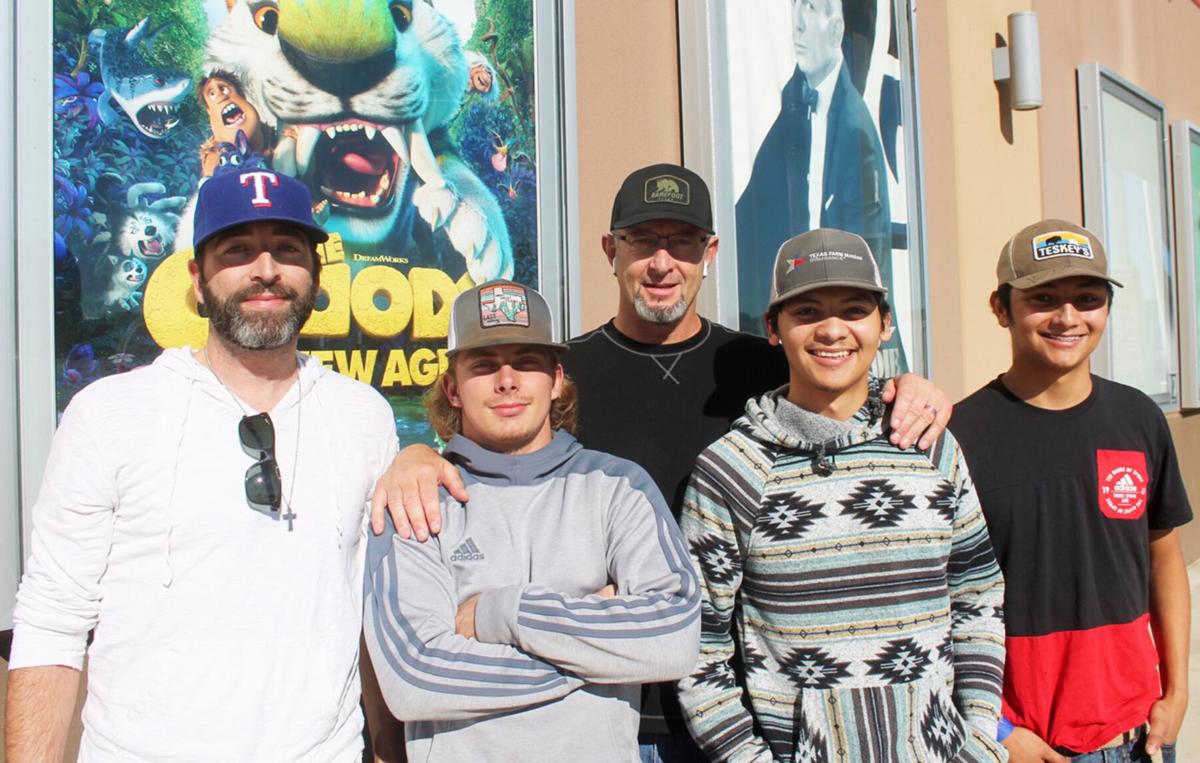 From left, videographer Jared Christopher, left, has embedded himself for the better part of two years in Strawn while filming J.W. Montgomery, Dewaine Lee, Marco Lopez, Avelardo Lopez and the rest of the Strawn football team.

From left, videographer Jared Christopher, left, has embedded himself for the better part of two years in Strawn while filming J.W. Montgomery, Dewaine Lee, Marco Lopez, Avelardo Lopez and the rest of the Strawn football team.

The kid from Strawn is small in real life — about 5-and-a-half-feet tall, maybe 145 pounds. Project his image onto the 30-foot tall screen at Film Alley in Weatherford, however, and a star is born.

“I love it — I love the fame,” J.W. Montgomery said moments after seeing his personal life splashed out for all to see at a recent private screening of “Texas 6,” a CBS docuseries following the Strawn Greyhounds’ quest for a state title in six-man football in 2019.

The series is available for streaming at CBS All Access and has earned glowing reviews from the Hollywood Reporter, The Wall Street Journal and others. The New York Post described the series as “riveting.”

Montgomery, the stoic team leader and slippery running back, sparkles on screen. He raises pigs when he isn’t scoring touchdowns, but he isn’t the only captivating character here. The team is filled with them, including timid but talented quarterback Blaze Duncan. The spindly kid with a shy smile was taken in, along with numerous siblings, and raised by his grandma, who works as a cook at the town’s only cafe.

Duncan is amiable and kind and wants to attend cooking school and become a chef once he graduates from high school. Viewers across the country will most likely want to find out where the heck Strawn is and send a care package to this adorable kid. He couldn’t attend the recent screening — he was working construction to save money to pay for culinary school.

Head Coach Dewaine Lee is another gripping figure. He and his wife are childless, and Lee comes across as a caring father figure to his players, even when he is yelling at them, which is often. His love is obvious, though, and he reminds them regularly to listen to his words, not his tone.

You might not give any of these people a second glance if you sat next to them while eating chicken fried steak at Mary’s Cafe or buying a beef stick and soda at the Greyhound Pac-A-Sac in Strawn. They become fascinating when featured in this deep-dive documentary that exposes their frailties and personal lives while they seek to do the near impossible — three-peat as state champs and satisfy the 600 or so townsfolk who root for the local football team.

Lee, Montgomery and the entire Strawn team loaded onto a school bus and made the trek to Weatherford last week to watch the first few episodes of “Texas 6,” as shown by videographer Jared Christopher. The remaining shows will air each Thursday.

Christopher directed the heralded “Titletown, TX,” the docuseries about the Aledo High Bearcats released in 2016. Three years later, he embedded himself in Strawn and spent six months spotlighting the team. The shows being released this year are from the 2019 season, but Christopher received a green light to shoot a second season, and he is following Strawn’s team again this year as they try for another title.

Before the screening, the kids were nervous and excited, wondering what the show would look like and hoping it would be as thrilling as “Titletown, TX.” Most were born and raised in Strawn and have spent little time elsewhere. They never imagined being on a show set for nationwide release, beaming their names and faces into millions of households from coast to coast and beyond.

Christopher, standing in front of the theater screen and speaking without a microphone, told the kids that he and his crew shot 500 hours of footage and had to edit everything down to eight episodes — less than five hours of screen time. He explained the cutting room floor and warned that some kids wouldn’t receive as much screen time as others.

“I appreciate all of you giving of yourself,” he said. “To take all that footage and distill it down to these little 30-minute episodes, you have to make some choices. I hope it gets the essence of what you guys are all about.”

Afterward, everyone appeared to be pleased. Montgomery described the series as “awesome” and “different.”

He, his teammates and their families will have to wait to watch future episodes, just like everyone else. Montgomery’s mother, Nancy, predicted Strawn residents would be glued to their TVs on Thursdays.

Avelardo Lopez didn’t receive as much screen time as some of his teammates but was all smiles after the screening.

“It’s going to be crazy that the whole world knows about us,” he said. “It’s going to be global. That’s great because not a lot of people know about our hometown. It’s something we’re going to show our kids some day.”

Perhaps the happiest person in the theater was Christopher, whose art and heart shone through every frame. At first, he wasn’t interested in recreating another football documentary but was intrigued by the quirky six-man style of play, the high-strung coach, the football-obsessed townsfolk and the baby-faced kids who seem so young to be carrying the weight of the town on their shoulders.

“It’s more about these kids and this way of life than it is about football,” Christopher said. “As you progress through the series, you begin to peel back the layers on people, just like you do in any relationship.”

He spent six months filming and grew close to his subjects.

“As my relationship deepens with them, so does your relationship as an audience member,” he said. “You realize what these kids are really fighting for off the field.”

The first time he met Duncan, the quarterback, Christopher was confused. Duncan was too shy to communicate almost. Given up by his drug-addled mom and incarcerated dad, Duncan is sweet but guarded and introspective.

Duncan “couldn’t even look at me in the eye,” Christopher recalled. “He had his head down, looking at his feet.”

“I said, ‘You are the defending two-time state champions, and your quarterback can’t even look me in the eye when he talks to me. How is he going to carry the team?’ I started to realize there could be something here.”

What he found was an alliance of youngsters bonded by shared hardships and devotion to duty. These elements are found on many teams in many cities but seldom to this degree, Christopher said.

“This football family they’ve created in this little town means more than some of these bigger schools in the Metroplex,” he said. “A lot of these kids, for whatever reason, come from broken homes, and this coach and this team has created this family dynamic that transcends the football field.”