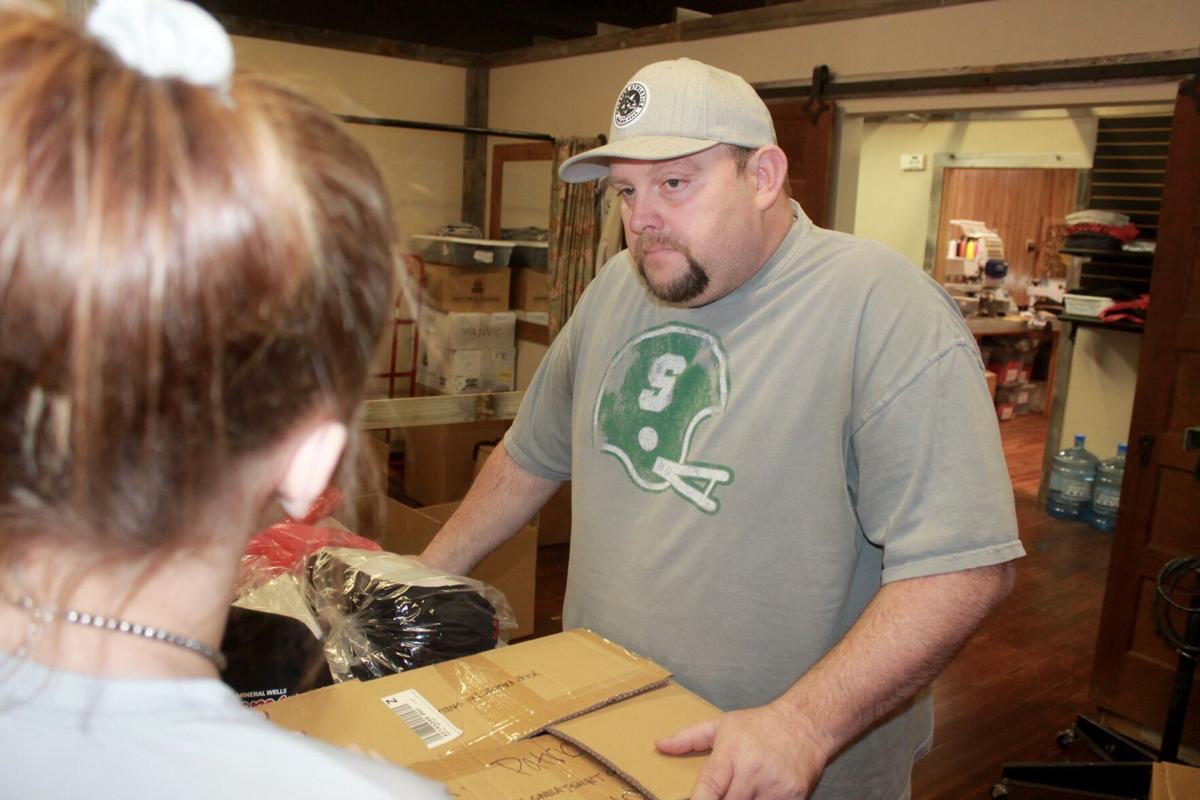 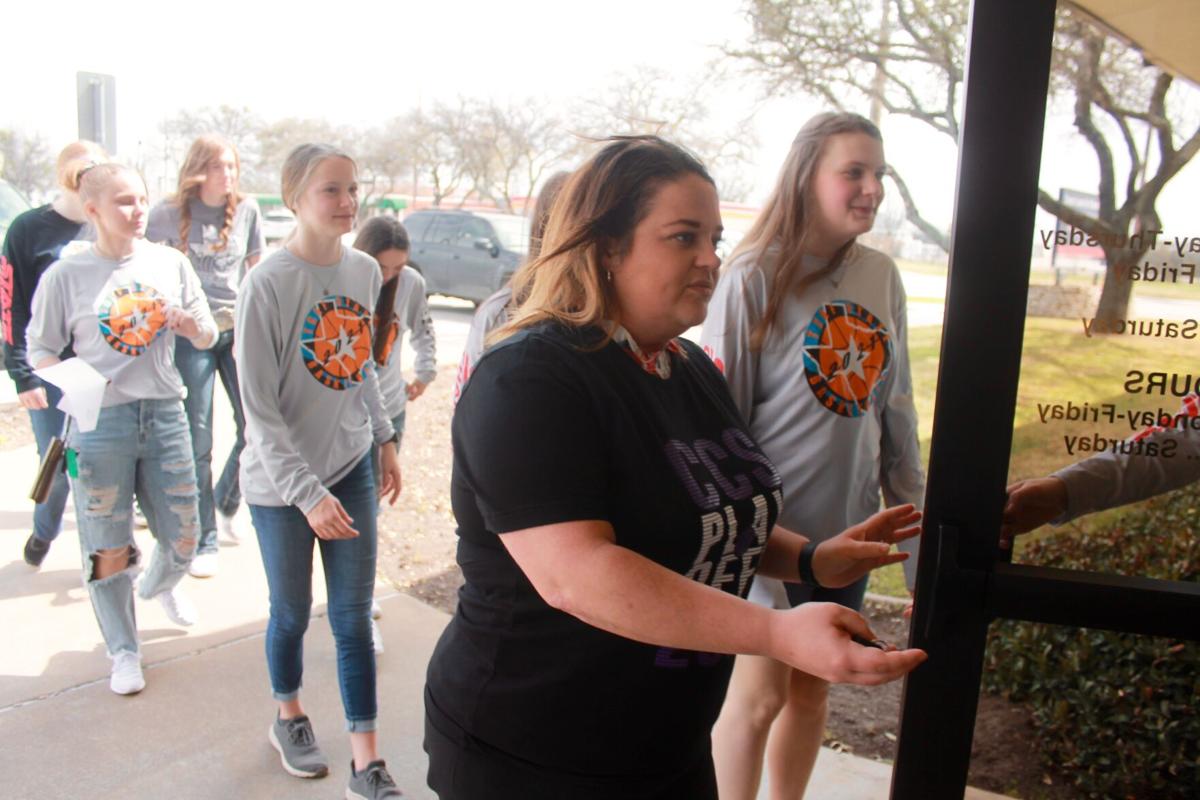 Assistant Coach Lisa Ballenger accompanies the state champion Community Christian Lady Warriors to a bank in Mineral Wells to solicit a donation for a ring ceremony. 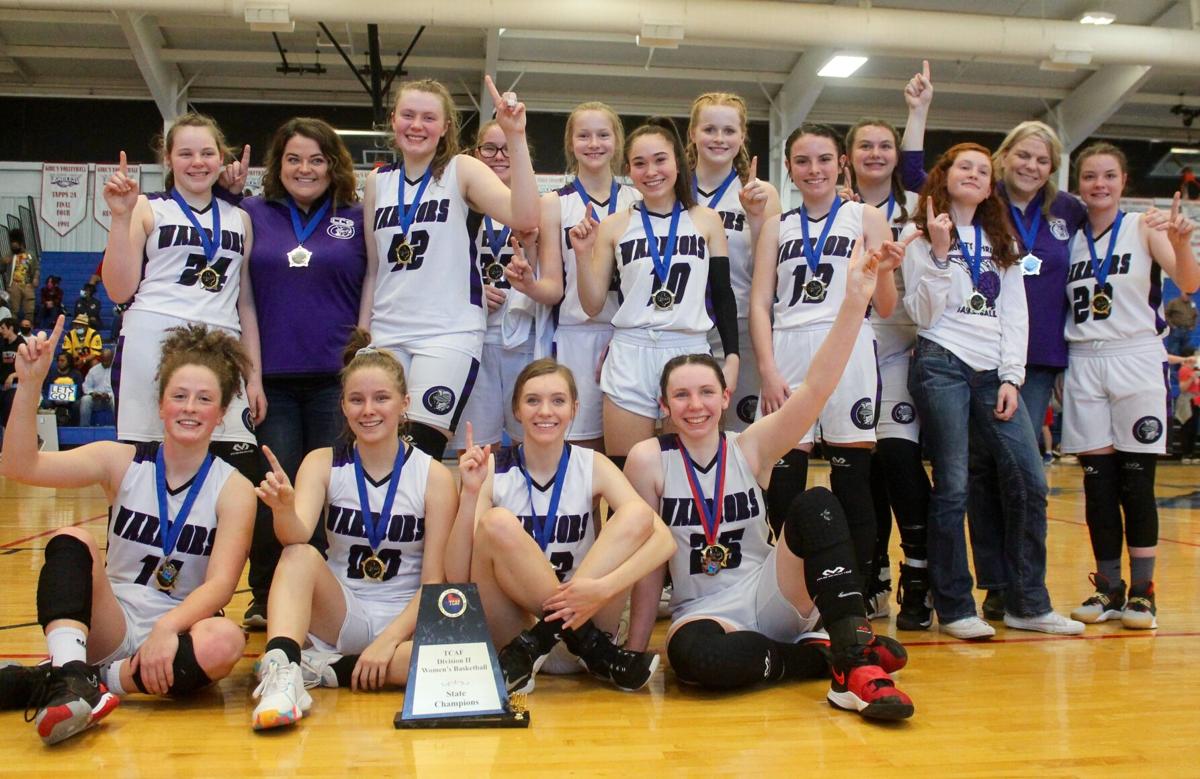 The fingers tell the truth -- the Lady Warriors are No. 1 in the Texas Christian Athletic Fellowship league. 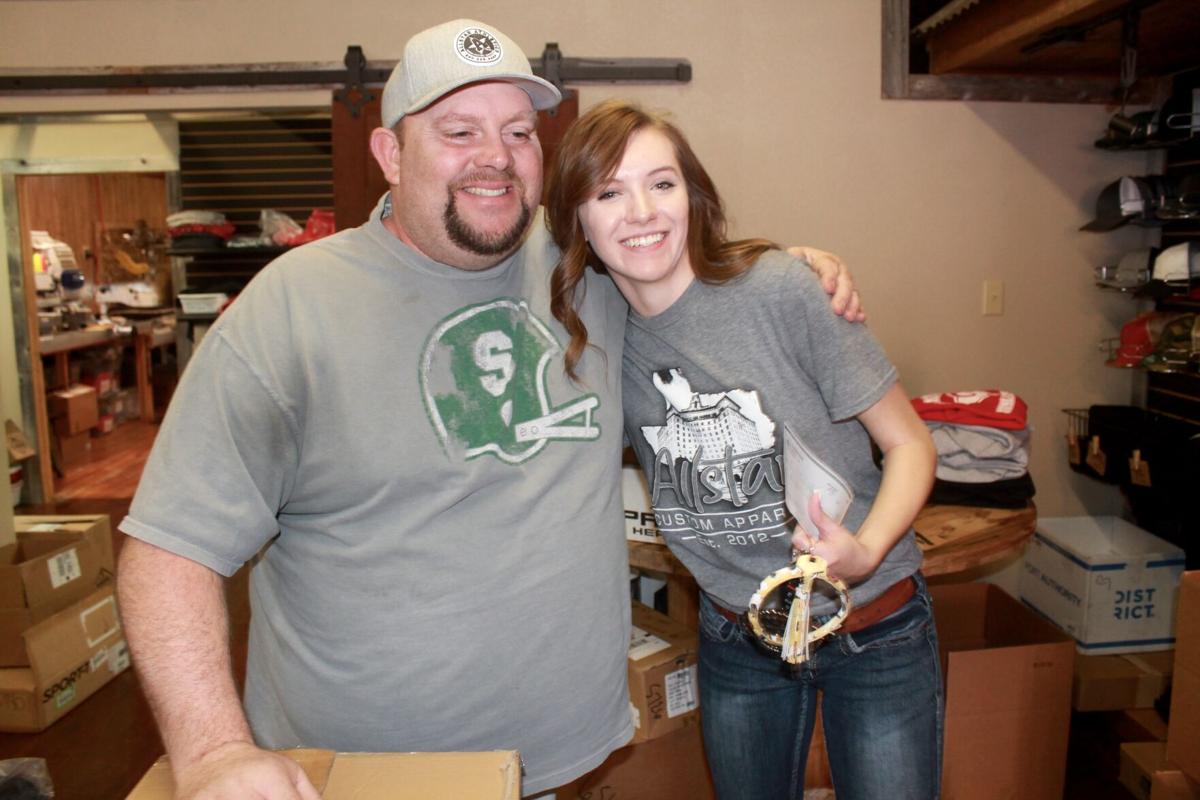 Kylie Maness gives a hug to Allstar Athletics owner Cecil Blackmon, who made a generous donation to the Lady Warriors.

Assistant Coach Lisa Ballenger accompanies the state champion Community Christian Lady Warriors to a bank in Mineral Wells to solicit a donation for a ring ceremony.

The fingers tell the truth -- the Lady Warriors are No. 1 in the Texas Christian Athletic Fellowship league.

Kylie Maness gives a hug to Allstar Athletics owner Cecil Blackmon, who made a generous donation to the Lady Warriors.

The girls were a tad nervous and a little discouraged when they filed into Allstar Athletics in Mineral Wells earlier this week. Cold-calling local merchants and asking for money isn’t anyone’s idea of fun, and the girls had found no donors after several attempts.

For many years, these girls practiced with diligence on the basketball court to reach their ultimate goal — a state championship. The title they claimed earlier this month was the first the school had earned in two decades.

Now, the girls are back at work, trying to raise money for rings and a celebration. The silver jewelry won’t include gemstones but will require extensive engraving that puts the cost at a little more than $200 apiece, Head Coach Kayla Buchanan said. The girls are seeking $5,000 to cover the costs of rings and a dinner banquet.

Seeking sponsorships from local merchants means “the players don’t have to pay for it out of their own pockets,” Buchanan said.

Ever the coach, she figured an attempt to raise money would provide an opportunity for growth. The girls would learn that rings and banquets don’t come free and that soliciting donations requires preparation and work.

Going around town cold-calling businesses was new to most of the girls, and Buchanan and Assistant Coach Lisa Ballenger provided pep talks about delivering their pitches with professionalism and smiling faces.

The small, private Community Christian has fewer than 40 students enrolled in high school. The Parent Teacher Fellowship raises money for various budgetary needs, but the athletic department doesn’t have a booster club supporting it.

Gate receipts at basketball games cover overhead costs, such as referee fees and gym rentals. No money, however, remains for rings and banquets. They could ask parents to pay, but they pay tuitions, athletic fees and other expenses already. Buchanan hoped to raise the money in other ways.

The Baker Hotel and Spa donated a tour package that the girls will be raffling, but more money would be needed.

“Booster clubs do this — it’s the adults who go out and gather the money — but we don’t have that,” Buchanan told her squad. “If you want [the banquet] sponsored, you need to do the work.”

The coaches created a flyer explaining how the Lady Warriors had won the state championship and were soliciting sponsors. Next, they created a handwritten list of local businesses that might be willing to donate. Then, after lunch one afternoon, the coaches and girls piled into Buchanan’s van and set out on their quest for capital.

They decided to start big and approach the banks first.

Strike three is not an appropriate metaphor for a basketball story, so let’s just say the girls felt as if they were in danger of fouling out. The coaches huddled with the girls in a parking lot to discuss where to go next.

Buchanan, sensing disappointment among the girls, offered encouragement posed as a question: “How many times did Edison do his light bulb before he succeeded?”

“Once?” one of the girls suggested.

“You wish,” the coach said.

They perused the list of businesses and decided to split into two groups and visit mom-and-pop shops. The bunch headed by Petrie and Maness made their way to Allstar Athletics and asked to speak to the manager. They were told he was on the phone in the back.

The girls waited quietly in the lobby until he was free, and then Petrie explained their purpose.

“That is awesome,” Petrie said. “Are you wanting to send a check to the school, or…”

Blackmon’s business caters to youth sports and he supports them as much as possible, he said. Blackmon recognized some of the girls in his lobby. He had attended the state championship game in Fort Worth not long ago and watched them topple Victory Baptist 72-42 in the Texas Christian Athletic Fellowship league.

Blackmon told the girls they looked “pretty sharp” in the game.

“Thank you so much,” they said in unison.

They told Blackmon they were beginning to worry whether anyone was going to donate to their cause.

“Don’t worry,” Blackmon said. “A state championship is a big deal. You will get a lot of support.”

He was right. Before the day ended, the girls had raised $2,310, including donations from Real Deal Motors and Tires, Freeze Carpets, Pratt & Garrett Law Office, Doshier Appliance AC & Heating and various individuals.