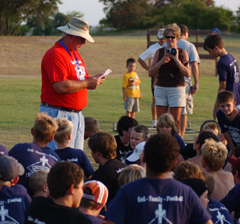 Weatherford High School head football coach Mike Sneed talks to his group of campers after the completion of the final day of camp. Sneed thanked the campers for their dedication and hard work. 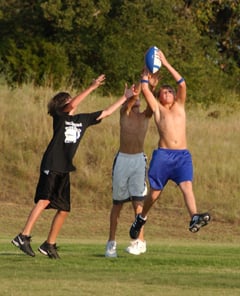 A Weatherford youth makes an interception during the last day of the Rompin’ Roos Football Camp at Weatherford High School. Campers braved the heat and participated in team competitions during the final day of camp.

Weatherford High School head football coach Mike Sneed talks to his group of campers after the completion of the final day of camp. Sneed thanked the campers for their dedication and hard work.

A Weatherford youth makes an interception during the last day of the Rompin’ Roos Football Camp at Weatherford High School. Campers braved the heat and participated in team competitions during the final day of camp.

Local youth from Weatherford braved the heat and strutted their stuff during the final day of the annual Rompin’ Roos Football Camp at the Outback on the campus of Weatherford High School Thursday night. “The kids worked hard,” said WHS head football coach Mike Sneed. “We went through ... it was 107 (degrees), 105, and I guess 103 yesterday and 103 again today, but we didn’t lose a camper. The only campers that weren’t there today [Thursday] were the ones that already told me they were going to be on vacation. “We must have done something right because they came back the second day. We were able to handle the heat with water breaks and popsicles, and we had a good time with the kids. That’s always a good thing.” Sneed estimated that 66 kids attended this years camp despite the high temperatures, but he added there is still room for improvement next year. “I thought the turnout was pretty good,” Sneed said. “I was a little disappointed in the medium grades, fifth and sixth grade, but we had a lot of first, second, third and we had a lot of seventh, eighth and ninth graders. We just turned up a little light on the sixth graders.” The final day of the camp was for players to apply all they had learned during their four days at the outback, but it was also time for the families of the campers to get involved. “We typically always have the camp from 6 to 8 in the evening so moms and dads can come and watch their kids,” Sneed said. “We have had it in the morning before, but kids usually need a ride or parents can’t come. “I think it’s real important that the moms and dads come out. The first day the coaches were talking about how it seemed like there were more parents than there were kids out there on the field. It just kind of gives you a more family atmosphere with everybody coming out, playing and having a good time.” The good times for the kids started when the first games were played, but the parents got into the action at the end of the day competing with campers in an obstacle course. “We try to make that kind of the finale,” Sneed said. “On Monday night, we let the campers run the obstacle course. They do that the last 10 minutes, but that’s when I tell them that they need to invite someone to come out Thursday night to compete against. “We told them to pick moms and dads and sisters and brothers. People they could beat. We were just kidding with them. Tonight that worked out really well. There were probably some other moms and dads that would have gone if we had more time, but we only had time to do it once tonight.” They annual Rompin’ Roos Football Camp will return next summer to allow more players and families to take part in the WHS football program.