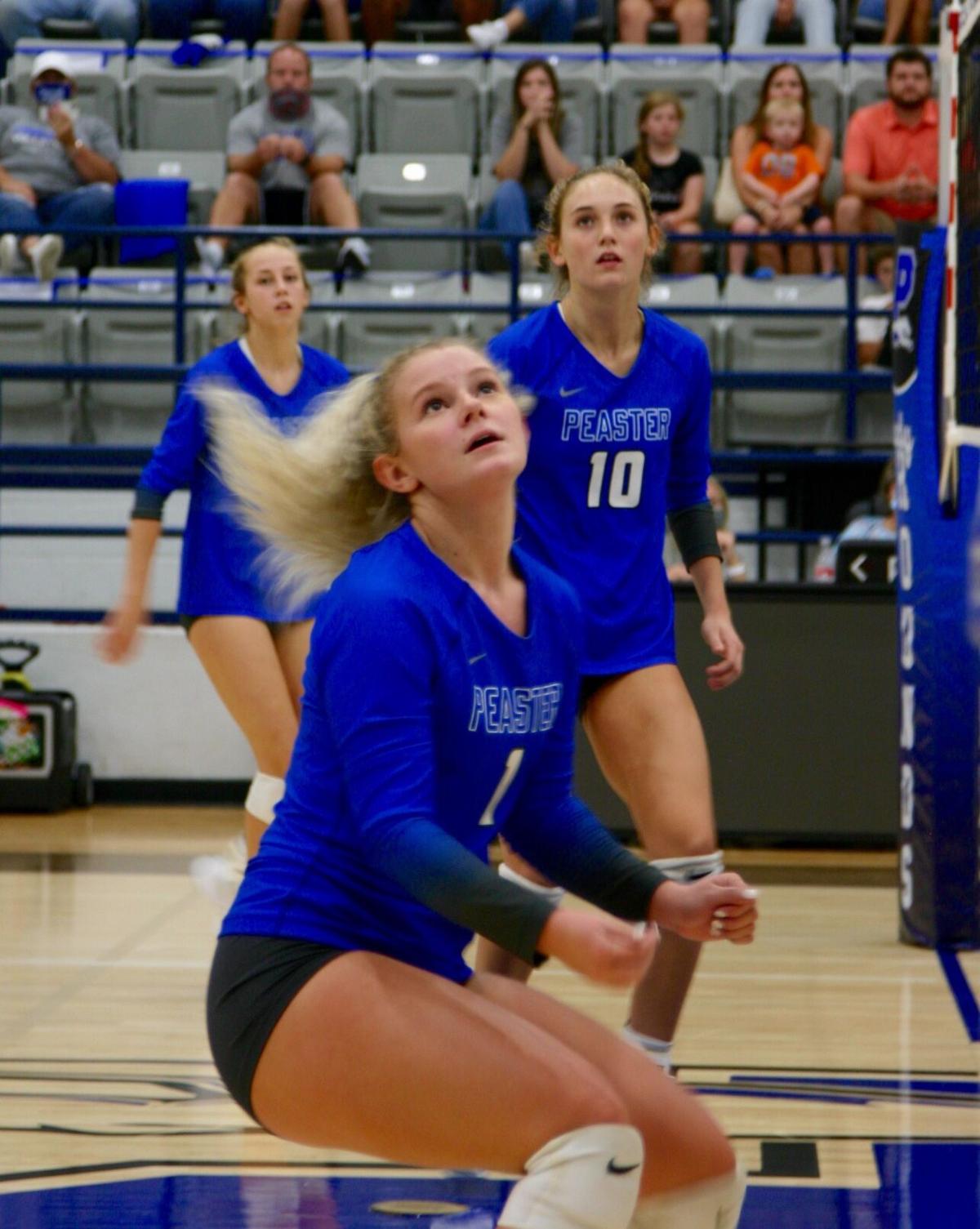 Peaster's Sadie Ballard keeps her eyes on the ball while helping her Lady Greyhounds beat rival Brock in straight sets on Tuesday. 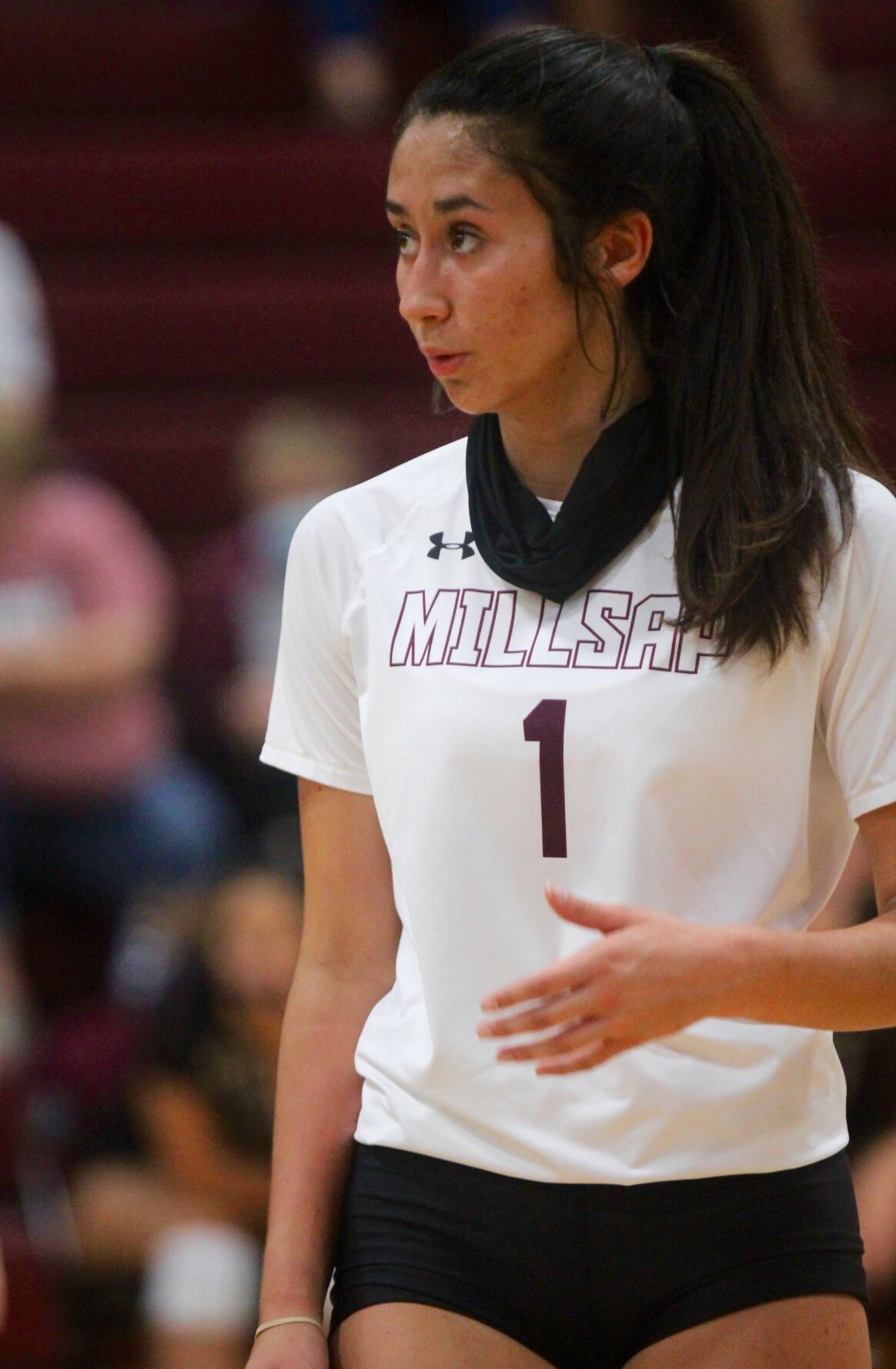 The surging Peaster Greyhounds won their district opener on Tuesday by beating the longtime rival Brock Eagles in three exciting sets: 27-25, 25-20 and 25-22.

Spectators crowded into the gymnasium at Peaster and erupted with cheers on both sides throughout the battle. The win put Peaster at 9-3 and ranked 17th in Texas while dropping Brock to 4-9 overall with a state ranking at 130.

“The Peaster and Brock game is always emotional,” said Peaster head coach Autumn Threet, standing on the hardwood court after the contest had ended. “It doesn’t matter which team is up for the year or which team is down, it comes down to a rivalry. All records go out the window.”

In 2017, the Greyhounds went undefeated in district play and beat Brock twice. Since then, however, the Eagles have owned Peaster. Threet has spent the past two years rebuilding her team after losing most of her older players to graduation. She now leads a veteran team ranked 45th in the nation and beginning district play on a strong roll.

Threet, a graduate and former coach at Springtown, was named head coach at Peaster in 2011. Her team was a state finalist in 2016 and appears poised to win its district this year followed closely by Brock. The teams will meet again on Friday, Oct. 2.

“I’m looking forward to the rest of the season,” Threet said.

Springtown on a roll

Railey Druxman, who is having a banner season, led Springtown in kills with 22 and added 18 digs, five assists and three blocks. Rayleigh “Miss Assist” Farris led the team in assists as usual and also notched 14 digs and three kills.

How strong is this team? Fans are about to find out. The Pines enjoy a bye on Friday but then hit the road to play Lake Worth on Tuesday and follow that game three days later by taking on the almighty Decatur Eagles (12-0), the second-ranked team in the state and third-ranked in the nation. That game is at 10 p.m. Friday at Springtown.

The Lady Dogs continue wielding a big broom, with the latest “sweep” victim being the Bangs Dragons on Tuesday: 25-14, 25-18 and 25-14. The victory marks four games in a row that Millsap has won in straight sets, improving its overall record to 6-6. Alexis Mejia nailed four aces, and Jolee Van Dyke notched three. Kennedy Burkhall led in kills with seven followed by Cheynne Pagan and Loren Morazzano with five each. Baylee Chriestenson and Van Dyke recorded 11 assists each.

Millsap’s next game is at noon Saturday at Eastland.

The Poolville Monarchs are back in the win column after a rare loss in straight sets to a struggling Ponder over the weekend. The Monarchs improved their record to 10-3 after winning three of five sets against the Lindsay Knights on Tuesday in their district opener: 24-26, 25-21, 25-15, 23-25 and 15-13.

“We had a solid game plan that every player stuck to and executed,” said Kendal Bracy, head coach at Poolville. “Everyone knew their job and did what was necessary to play their role.”

Poolville takes the court next at 5 p.m. Friday at home against Graford, a strong team this year.

Graford (7-3) notched another sweep on Tuesday, beating Forestburg in straight sets: 25-10, 25-17 and 25-13. The Rabbits have swept their last four opponents but face a formidable adversary next — Poolville and its 10-3 record.

The Rabbits and Monarchs face off at 5 p.m. Friday in Poolville.

The Perrin-Whitt Pirates lost their district opener to the Alvord Bulldogs in straight sets: 14-25, 13-25 and 21-25. The loss dropped the Pirates to 2-6 overall.

The schedule doesn’t become easier anytime soon — the Pirates play a road game at 5 p.m. Friday at Poolville against the mighty Monarchs.

The Lady Rams were off on Tuesday. They play a home game against Wichita Falls at 4:30 p.m. Friday.